Observations On The Doppler Effect

Students observe the changing sound of a car horn to learn about the Doppler effect and sonic booms.

The Doppler effect is the apparent change in a wave's frequency due to the motion of the wave source or the observer.
Lesson Author

To do this, students apply CCSS Math Practice 3: Construct viable arguments and critique the reasoning of others, Math Practice 4: Model with mathematics and Math Practice 7: Look for and make use of structure. They also are expected to construct an explanation and support their view with evidence which is NGSS Science Practice 6: Constructing explanations  and Science Practice 7: Engaging in argument from evidence. This is in the context of HS-PS4-1: Use mathematical representations to support a claim regarding relationships among the frequency, wavelength, and speed of waves traveling in various media.

I remind students that before they ever set foot in this class, they are already experts in physics. They have spent the last 15+ years developing a very good understanding of how the world works and as a result, they are able to perform complicated tasks. The purpose of this class is to teach them the vocabulary and math that goes along with their expert understanding of physics.

For example, I play only the sound from the Car Horn Doppler Video, not displaying the video. I ask the students to write down as many things as they can think of that describe the situation they hear. They write this in their notebooks. I then have a few students share. Amazingly enough, the vast majority of students correctly identify the situation as a car driving by with its horn blaring. I play the video so students can see for themselves. "See", I say, "you are experts at physics already. Now lets put some vocab and math behind what you already know."

I then bring up Doppler Effect Power Point and students get out their notebooks to take notes. They write down the definition of the Doppler effect. Then I bring up a blank graph of Loudness (amplitude) verses Distance From Camera. I play the video again and, using the small white boards at their tables, ask student groups to draw this graph as it applies to the car. They have 1 minute to complete this task. I then have all the groups raise their whiteboards. Students groups get it right as they draw an upside down v with the camera positioned at the maximum loudness. This is easy to understand as the car gets louder as it approaches and gets quieter as it gets further. I reveal the answer on the power point (which has animation and only works if downloaded). 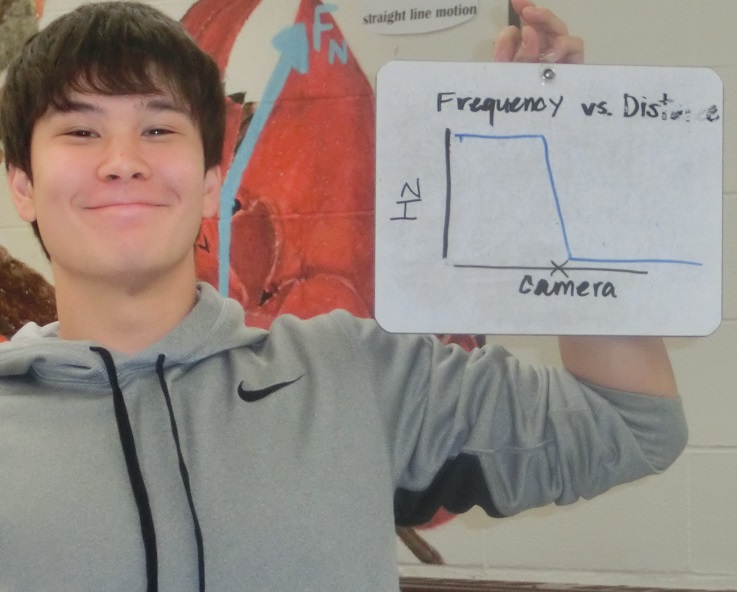 I then have students draw Frequency verses Distance. This one is harder because of how the frequency remains constant except at the moment it is passing by the camera. I replay the video several times as students discuss what they hear and how they should represent it on a graph. After 2 minutes, I call on all groups to raise their white boards. Most groups get a kind of stair-step graph, though there is often one or two groups who don't get it. I congratuate the successful groups and point out how musicians are useually more successful at this challenge. I replay the video sound with my solution to the frequency verses distance graph displayed on the board. I point to the red line graph as the sound plays to ensure all students understand the reason for this shape on the graph.

Worth pointing out to the students is that the Doppler effect does not give us information about how far away the wave source is, only how it is moving relative to the observer. If we want to know distance, we require other methods.

Once students understand how the frequency changes for a wave source in motion, I give them the visual model that allows them to develop their own explanation for why the Doppler effect occurs.

I open a Doppler Effect Applet on my computer and display it on the board for the students to see. It shows an animation model of sound emanating from a source in all directions. I remind students that the velocity of the wave depends ONLY on the medium and does not change no matter what the wave source does. I also point out that the distance between the concentric circles on the animation represents the wavelength of the sound wave.

The animation allows the use to move the wave source. I play with that feature and ask for random students to supply their observations. I then hand out the Doppler Introduction worksheet for students to think through what they witness so they can construct an explanation on why the frequency changes. I walk the class as students work on the sheet.

After 15 minutes, we review the Doppler Intro Solutions together (download file to view complete key). I display either my solutions or students exemplars. 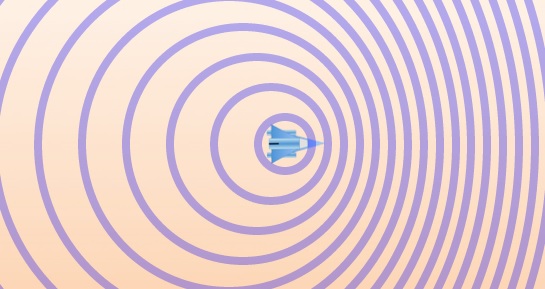 To finish class, I play a video of an F18's Sonic Boom. I play the video a few times and ask students for observations on what they see and hear. Then I play the same animation applet from the previous section, which allows me to show the sound waves produced relative to a jet going faster that the speed of sound. I instruct students to write in their notebooks an explanation of what they see on the animation and use that to explain what they heard on the video. I ask that they use the vocabulary words "constructive interference" in their explanation. I then circle the classroom looking for an exemplary explanation from a student to share with the class. One student writes: "Because the sound source is moving faster than the sound waves it makes, there forms a line of wave peaks that constructively interfere. This is what causes the sonic boom!"  One myth to bust here is that the sonic boom is created at the moment the jet achieves the speed of sound, as though the boom is the actual "breaking" of the sound barrier. The truth is the shock-wave that makes the sonic boom is continuously made by any sound source that is moving faster than sound. 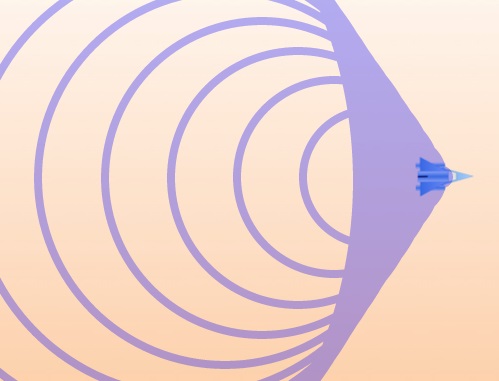 I tell students that now they know how and why the Doppler effect occurs, they next learn in Doppler Effect Equation how to use that to calculate the relative speed of the wave source.