SWBAT use a model to explain conservation of momentum and predict what happens in a collision.

In this lesson, students explore what happens when two objects collide. In particular, they examine what happens to each object after the collision.
Lesson Author

In this lesson students explore what happens when two objects collide. In particular, they will examine what happens to each object after the collision.

Goals for the lesson:

To engage students' thinking, have them consider the following scenarios:

1.You are driving your car at 20 mph. A truck right ahead of you suddenly stops and you crash into it before you have a chance to step on the brakes.

2. A truck is moving at 20 mph. Your car is standing still at a light and the truck crashes into you before the driver has a chance to step on the brakes.

3. You are driving your car at 20 mph. A bicycle right ahead of you suddenly stops and you crash into it before you have a chance to step on the brakes.

4.  A bicycle is moving at 20 mph. Your car is stopped for a light and the bicycle crashes into you.

In your journal: Predict what you think will happen in each of these cases. Are there any tentative generalizations you might make based on these situations?

Give students time to think and write, then ask a few students to share their ideas. If you have individual white boards, this is an opportunity to use them. Have them focus their predictions on the vehicles only, not the operators. 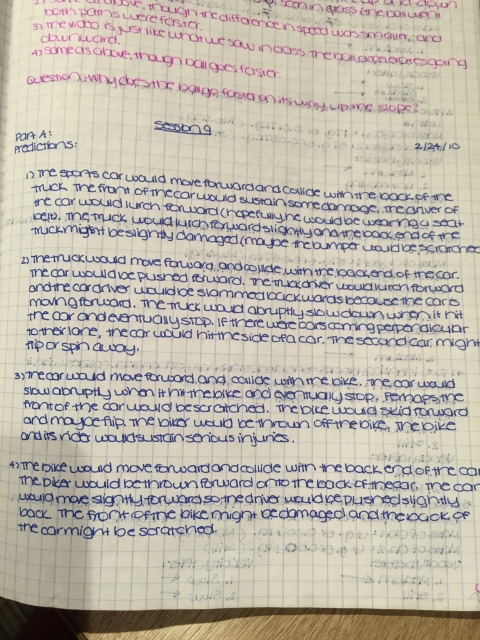 1. Set up two yardsticks parallel to one another to make a track for the balls. The ball should move smoothly between the yardsticks in a straight line.

3. Before they begin, weigh each object using a balance or scale.

NOTE: The phenomena they are studying is governed by rules that assume that there is no friction. Since students are working with situations in which there is some friction, precise quantitative relations will not hold, but they'll be able to see patterns in their results if they keep this in mind. Rather than keeping track of exact velocities in the experiments they conduct, keep track of direction and relative velocity in each case (e.g., slow, medium, fast). They'll have an opportunity to experiment with a simulation of a frictionless world later in the lesson.

For each of the following scenarios students will:

1. Predict how they think the objects will be moving after the collision—both their direction and relative velocity.

2. Act out the collision. Compare what happens to their prediction.

3. Watch each of the videos. How do the videos compare with their predictions and their observations?

4. Answer this question qualitatively, Because friction is affecting your experiments, quantitative measurements will not accurately reflect the physics that is occurring."

To keep track of mass and velocity before and after a collision, students will want to organize their work into a simple chart. See the Crashes and Collisions Student Handout for an idea of this.

1. Two balls of equal mass — one stationary, the other collides with it.Equal Mass Video

5. Two identical blocks—attach the opposite sides of the Velcro on each block and push one block into the other so they stick. Sticky blocks collide

Have students pull their thinking together by writing to the following prompt:

What patterns do they see in your chart? Look in particular at the relationship between the two masses. How does this relationship affect the result of the collision? Record your results in your journal. 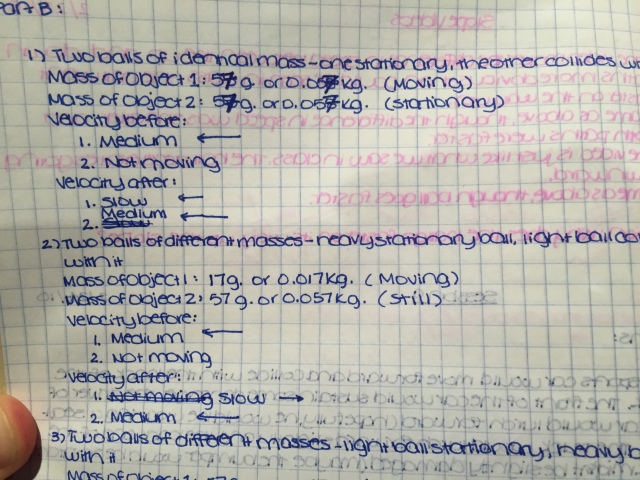 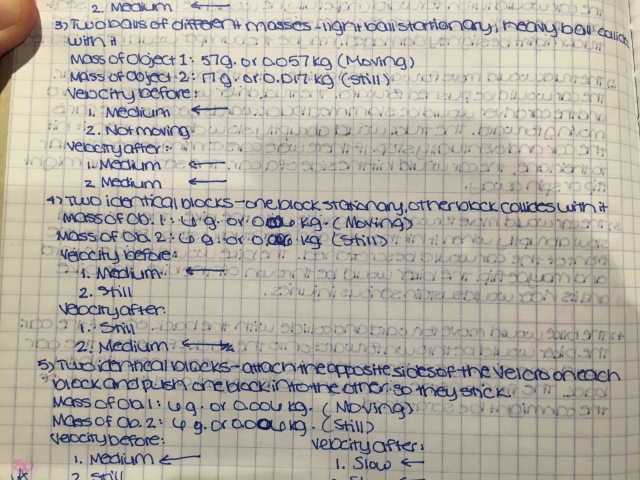 20 minutes
Time to play with sims

To explore crashes and collisions in a frictionless environment use the Collision Lab from PhET, which simulates the collisions with balls.

First, students explore the simulation, trying out different combinations of masses, velocities, and values of "e." Then they use the simulation to study the collisions investigated earlier in this session:

For each situation they should draw a diagram indicating the momentum of each ball or block before and after the collision. Then students run the simulation and observe what happens.

What similarities and differences do you notice between your experiences with the balls and blocks and the simulation? 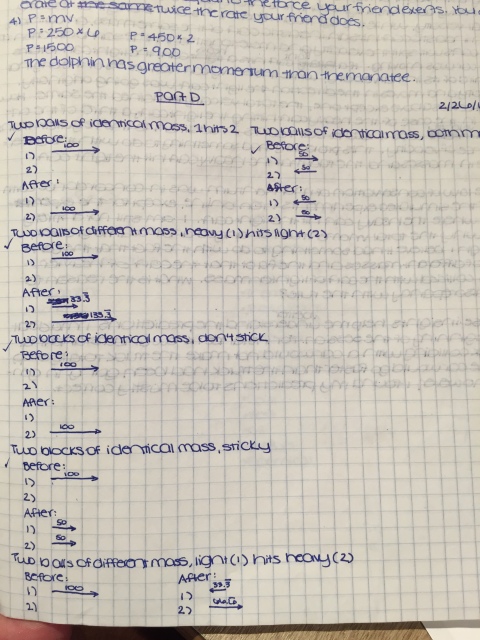 What happens in the situations above has to do with momentum and the conservation of momentum. We use the word momentum informally to mean how much "oomph" a person or object has; how much impetus.

In physics, momentum has a very specific definition — it is an object's mass times its velocity, or momentum = mv. Momentum has traditionally been labeled by the letter "p", so the formula as physicists write it is p = mv. This is another equation like F = ma, which relates a quantity describing motion to an object's mass, but this time it is related to the object's velocity rather than its acceleration. In our study of force, we established that if an object is not accelerating, there is no net force involved. In that case, both F and ma are 0 (zero), no matter how fast an object is moving.

Momentum can be represented by a vector, just like velocity. When an object has momentum, it has momentum in a direction, the direction of its velocity. Momentum can be indicated in the same way velocity and acceleration are, as an arrow to indicate its direction and a size attached to that arrow either by length or by an explicit number. For example, a momentum of 3 mg x 5 cm/frame would be represented this way:

One of the most important things about momentum is that it is conserved in collisions. That is, the amount of momentum in a system is the same before and after the collision. 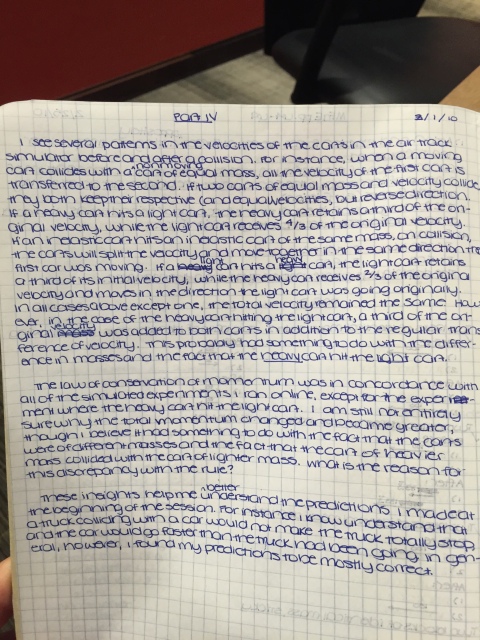 In the video below I briefly address how this lesson aligns with NGSS Science Practice 6: Constructing Explanation.