Students will apply Coulomb's Law to determine the net force acting on a single charge.

Forces can be summed together to create a "net force."
Lesson Author

The goal for today is to have students gain some comfort with the ability to combine multiple electrical forces acting on a single charge. Over the next few lessons, the problems will get more challenging but today we focus on charges that are co-linear. The standards to be addressed are HS-PS2-4, HS-PS3-5, and the Science and Engineering Practice of Developing and Using Models, SP2.

Before considering multiple charges, I want to ensure that students can use Coulomb's Law successfully. To do so, I provide them with a simple two-charge problem as a warmup. In addition to providing my students with an opportunity to practice with Coulomb's Law, this problem also anticipates a need for the multi-charge problems that lie ahead - the identification of the direction of forces acting on the charges.

As this problem is relatively simple, I give students just a few minutes to work with it, though they may consult one another or me if stuck. I then show the solution and focus on the direction of the forces. I want students to recognize two ideas: that the magnitude of the force is calculated using Coulomb's Law and the direction is determined by considering the signs of the charges.

In the solution, the red arrows (attached to the charges) are added at the end of the problem. I also take a moment to resolve the answer to the correct number of significant digits and show tow possible ways of writing the number properly. Having established the correct use of Coulomb's Law, we are ready to add in the complexity of three charges interacting with one another.

At the Smartboard, I lead my students through a set of new ideas involving three charges that are aligned. 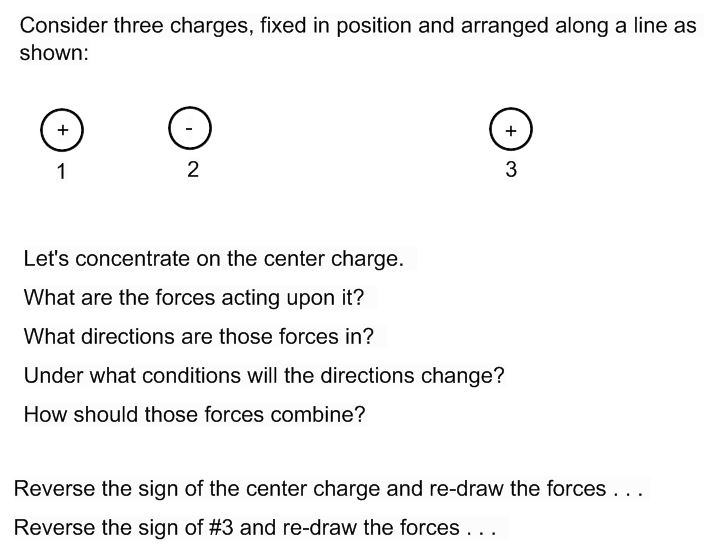 As an opener, I ask them to consider the forces acting on the middle of three charges. Using the shade feature of the Smartboard, I reveal questions in a deliberate order:

First set: What are the forces acting upon it? What directions are those forces in?

Second set: Under what conditions will the directions change? How should those forces combine?

Students often have many ideas - both on target and not - about this kind of problem and the discussion can become jumbled in a hurry. For example, students will immediately want the charges to move in response to the electric forces. They often want to say where the outside charges will move to or predict the long-term behavior of the system. These are reasonable inferences to draw, but they take us away from the main point of the lesson - to examine how multiple forces on a sngle charge can be combined. By revealing just a few questions at a time, I can control the flow of the conversation better.

I want to limit the conversation to the instantaneous forces acting upon the center charge. If we can develop strong ideas about one charge, we can apply the same thinking to any of the charges. In addition, if we can develop strong ideas about the charges in a FIXED position, we can imagine how to re-think what happens when the charges are free to move. If successful, we set the stage for calculating net forces, an essential skill in an introductory Physics course. Before moving on to a sample problem, I probe student understanding by asking students to identify what will happen to our drawing of forces if various charges have their signs reversed.

After the opener, I show students a sample problem from beginning to end. 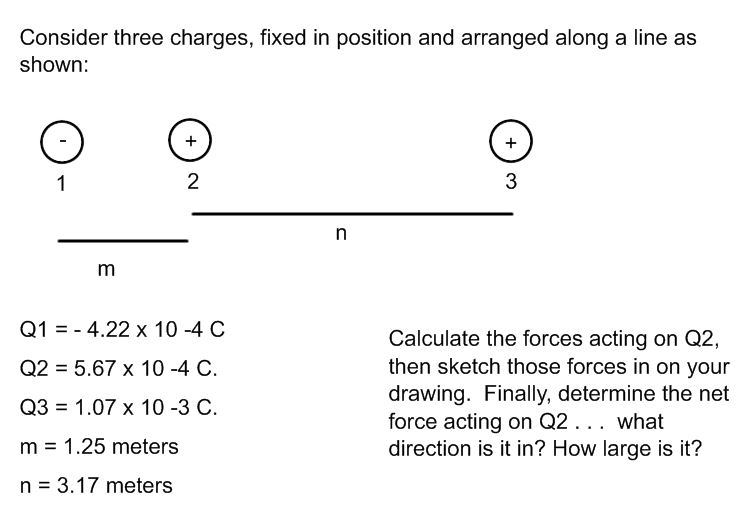 In this segment, we move from concept to computation. To expedite the process, I have one half of the class calculate one of the forces acting on the center charge and the other half calculates the second force. We discuss the directions of the forces by thinking about the signs. I draw arrows on the center charge to make it plain that these two forces, in this case, will be working together. It's natural, then, to add the forces together to get the net force. This serves as a model problem which can be accessed during the upcoming practice time. A solution to the sample problem is provided.

I provide two practice problems for students to try during this time. Students are welcome to collaborate and, indeed, I encourage them to do so. While I circulate and tend to those who may need the most help, student peer-to-peer instruction can enable others to move forward.

My main goal is to get students to consider the combination of forces and to begin the process of understanding the concept of a "net force." Soon, we will combine forces at right angles which will require students to employ some right triangle geometry. For now, having students appreciate the sense of direction that each force has and its impact on the final determination of the net force is an important learning outcome. A solution to the first practice problem is provided.

Some time today is set aside for students to complete the data collection portion of the "Work as Area" Investigation. Materials are ready for use and students are familiar with the equipment so much can be accomplished in a short time. We will take the remaining time today to move our investigations forward, hopefully to a conclusion.

We are in the final stages of this investigation. Some teams need more time than I can provide today to finish up while others are just about completed with their work. in the next class, I provide some "self-directed time," where students can either return to the lab area to get their final data sets or move on to the task of writing up their lab reports. The end of an investigation is typically not a hard cut-off; it's not unusual for me to provide some soft time where students can be doing different tasks to suit their needs.

Here, a group of boys prepares the force sensor for some data collection. 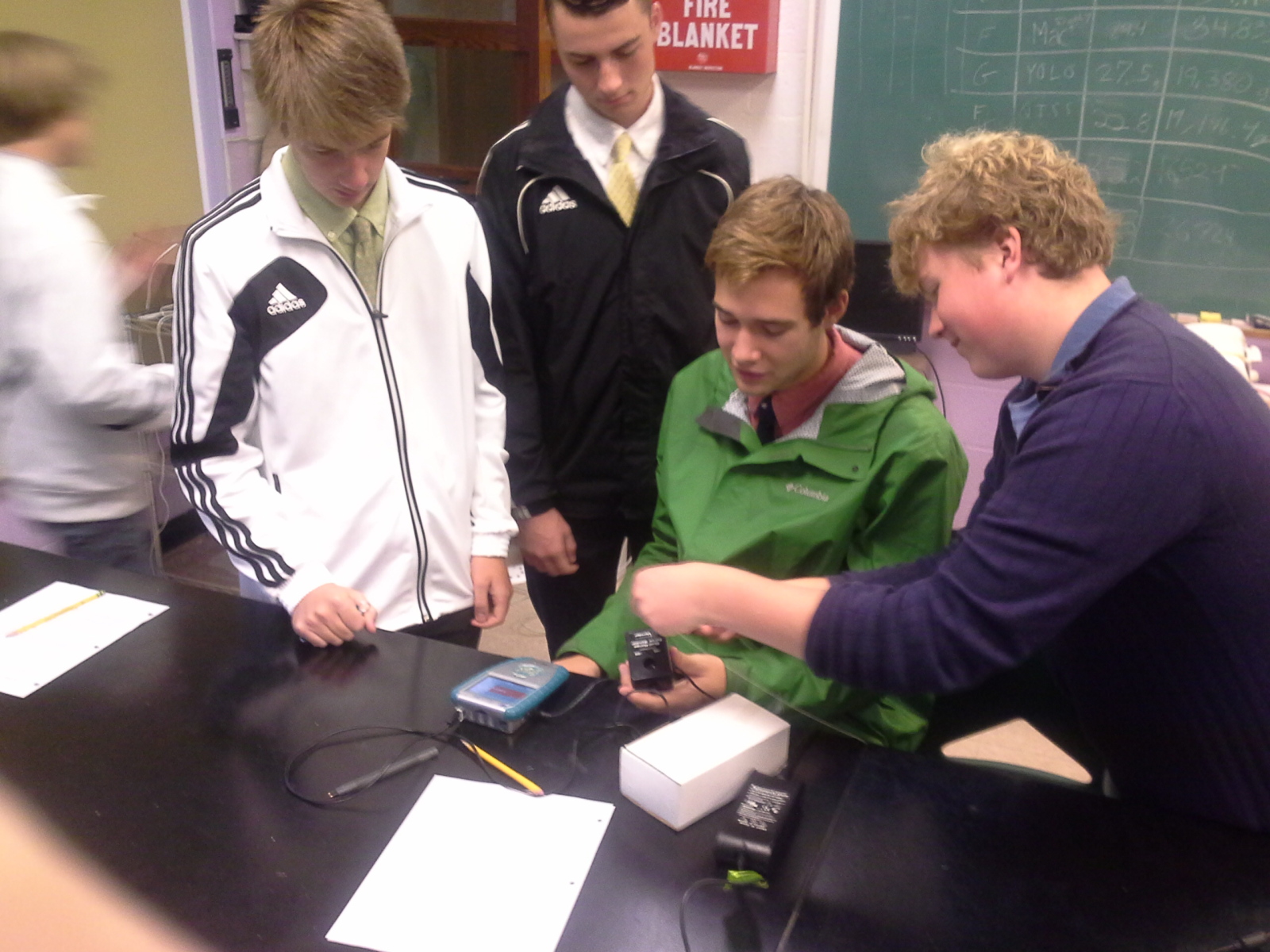