Students will continue to explore four big ideas in electromagnetics - light behaving like a wave and a particle, and the two ways in which electric and magnetic fields induce one another.

In science, we make claims based on evidence, especially when the claims are not intuitive, as is the case with electromagnetics.
Lesson Author

Timothy Brennan
Woodstock, VT
Grade Level
Ninth grade
Tenth grade
Eleventh grade
Twelfth grade
Subjects
Science
electromagnetic induction
Physical Science
electromagnetism
Waves
photoelectric effect
wave-particle duality
Standards
HS-PS2-5
Plan and conduct an investigation to provide evidence that an electric current can produce a magnetic field and that a changing magnetic field can produce an electric current.
HS-PS4-3
Evaluate the claims, evidence, and reasoning behind the idea that electromagnetic radiation can be described either by a wave model or a particle model, and that for some situations one model is more useful than the other.
SP3
Planning and carrying out investigations
SP4
Analyzing and interpreting data
SP5
Using mathematics and computational thinking
SP7
Engaging in argument from evidence

In this unit on Electromagnetics, we are in the third day of a multi-day investigation of electromagnetic phenomenon. Students have studied the electromagnetic spectrum and considered the properties of waves and the energies of different parts of the spectrum (HS-PS4-1). The investigation, however, has students confronting some of the less concrete aspects of electromagnetics: the wave-particle duality of light (HS-PS4-3) and the induction principles (HS-PS2-5) that tie the disciplines of electricity and magnetism together. In addition, the investigation provides a rich background for students to engage in several of the NGSS Science & Engineering Practices, including planning and carrying out investigations (#3) and analyzing and interpreting data (#4) among others.

I take advantage of our 80-minute lesson time by providing a small amount of relevant content each day over the course of the investigation. Today, I share some thoughts about the photoelectric effect (HS-PS4-3) before students return to their lab work.

We return from an extended, four-day, weekend today and, as such, I need to do a bit of backtracking before moving forward. I revisit the photoelectric effect with the goal of demonstrating the moment when the wave model of light becomes insufficient. It is a difficult line of reasoning to appreciate and I proceed with the aid of multiple graphics and a web-based simulation.

Before constructing that argument, I spend a few minutes reviewing what we've already said about the photoelectric effect in a previous lesson. This preface helps students prepare for the logical inconsistency that lies just ahead. The last part of the review is our summary of wave energy ideas: we have stated to alter the energy of a wave one can change either the amplitude or frequency of a wave. In terms of light's physical properties, these are observed as a change in brightness and color, respectively. 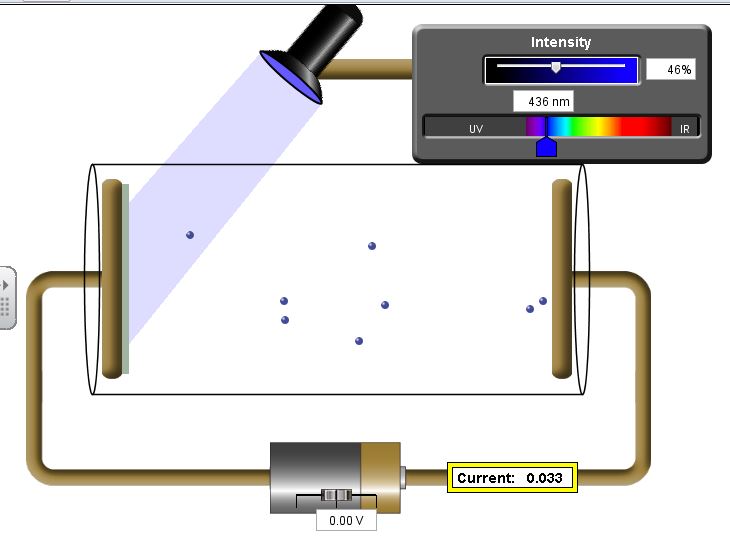 I adopt a model of "light as a wave" for the rest of this lecture. I make sure to make that model explicit at each stage of the argument. Here, for example, I show that, if I increase the amplitude of my light wave, I can achieve greater electrical output - the intensity is set to 100% and the current has increased from .033 amps to .071 amps. 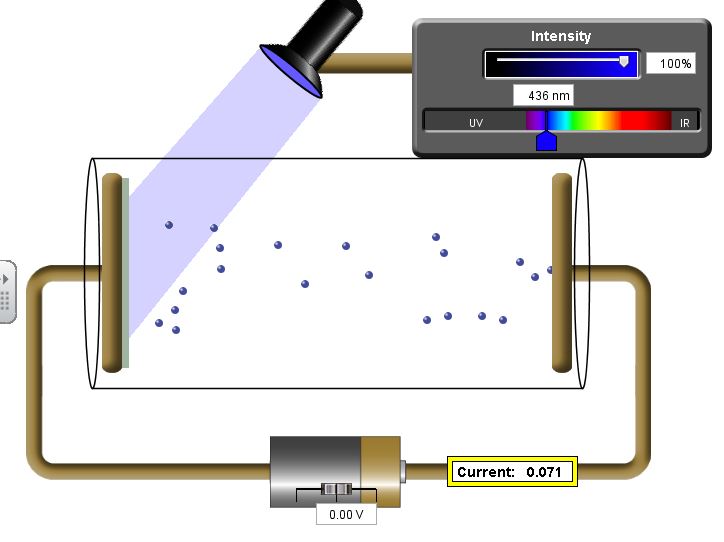 Next, I show that I can also increase the electric output by increasing the frequency of the wave. Unfortunately, the simulation is set up for wavelength adjustments, so there is, by necessity, a short detour to remind students that the two are inversely related. One can see in the image below that with a lower wavelength (higher frequency) the output current has, once again, increased. So far there is no evidence to suggest that light cannot be behaving like a wave. In fact, the evidence supports the idea that either amplitude or frequency can increase the energy of the light. 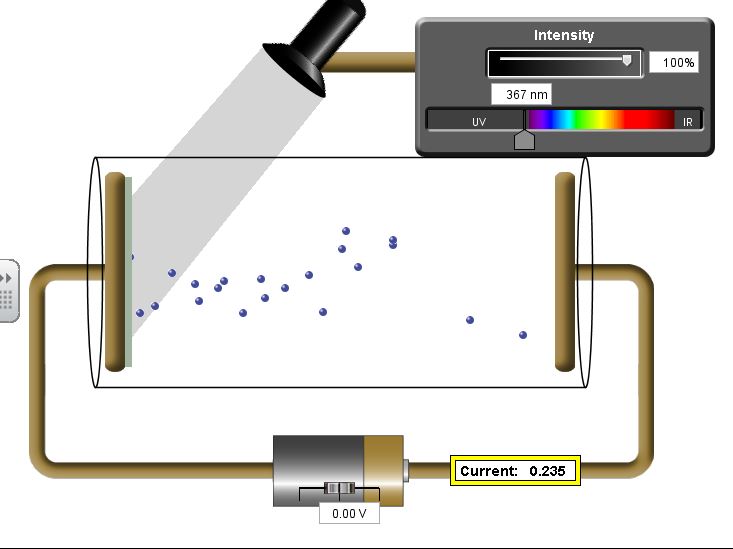 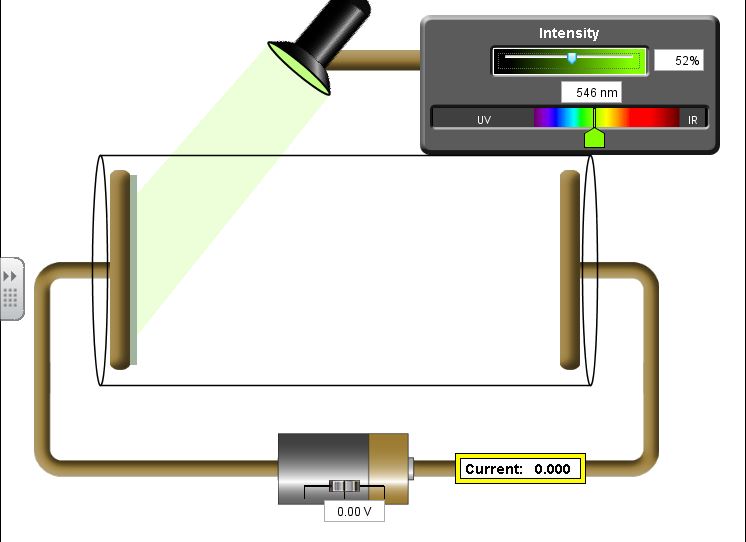 So I increase the amplitude to 100%, then to 156% (a regrettable barrier within the simulation). The current remains at zero. In fact, this was the dilemma first recognized in the 1880s and, until Einstein proposed the idea of particles of light ("photons") carrying Max Planck's quantized bits of energy, it remained a mystery. 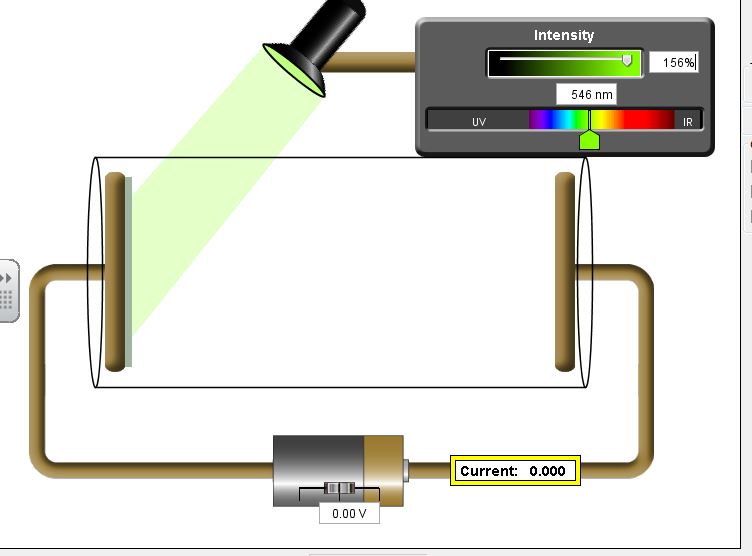 I spend a few minutes ensuring that students can appreciate what we've just observed: using a wave model of light and energy, we made a prediction about light that was eventually not supported by evidence. We must concede that light, at least in this experiment, is not behaving like a wave.

We're just about ready to transition to the lab work for the day, but first I remind my students that there are three different colored bulbs to use at the photoelectric effect station. Perhaps they can apply this new knowledge and look for differences in output as a function of color (or frequency).

Students move to the back of the room to pick up materials that are relevant to their current station. I help teams get started and provide some oversight, particularly for those groups who may be starting new stations today. Teams collect data, at each station, that supports the Four Big Ideas of electromagnetics - light behaving like a wave or like a particle, and the two induction principles linking electricity with magnetism. The primary content learning targets are HS-PS4-3 and HS-PS2-5. In addition, the assessment of this activity rests squarely on the students' abilities to show how the evidence supports each of these fundamental ideas - a direct connection to the Science & Engineering practice of making arguments based on evidence.

Here's a sense of the general activity in the room. In the background, a team is making some preliminary observation at the double slit station. In the foreground, two boys are setting up the solenoid station. The rooms lights are out to provide greater contrast for the two stations that are light-sensitive. Lighting conditions change throughout the lesson as teams request more or less light. 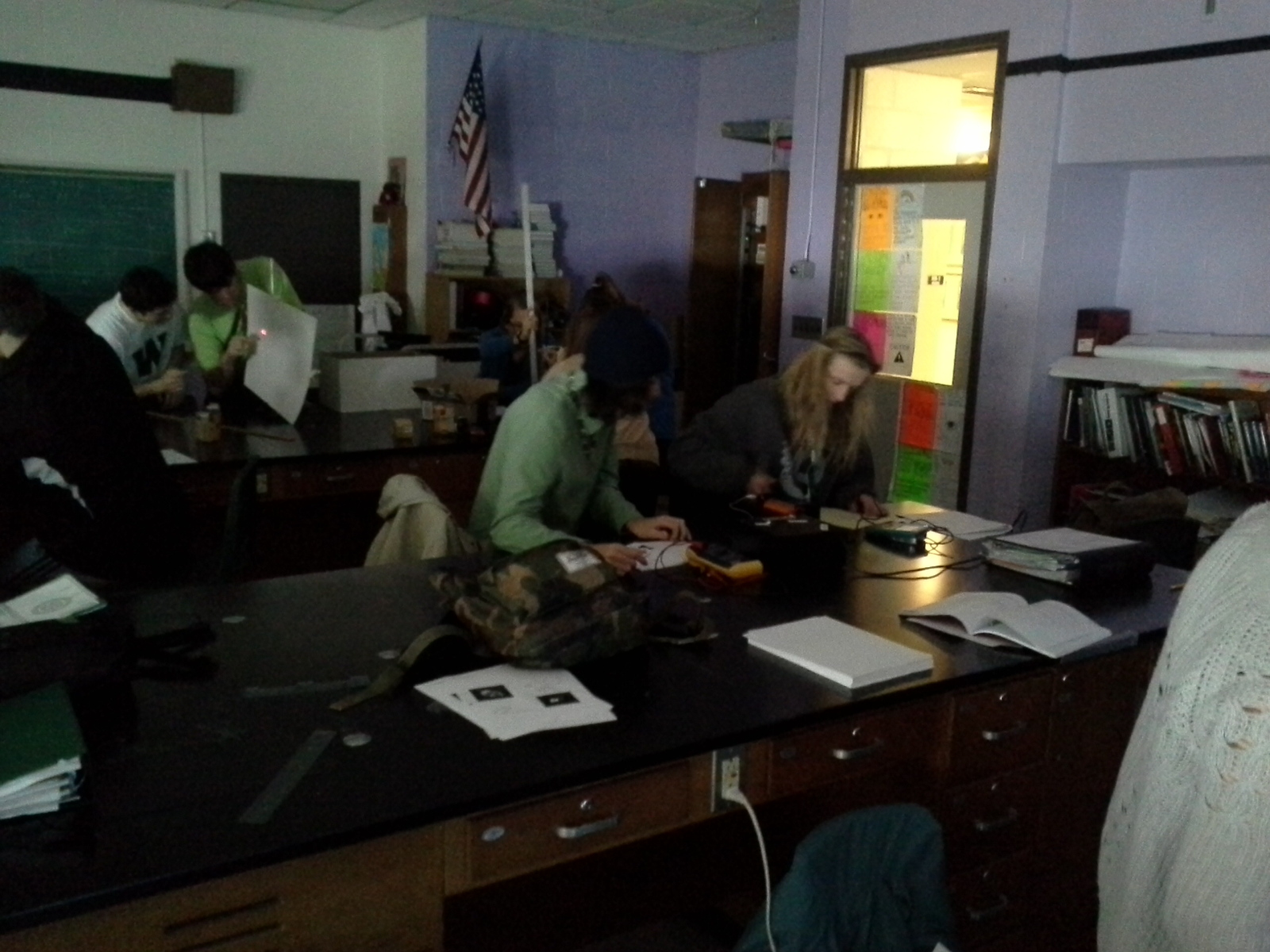 Here, the team at the double slit station creates the following interference pattern. They use the ruler to measure the separation of the successive bright spots which, in turn, helps them calculate the wavelength of the laser light used as a source. 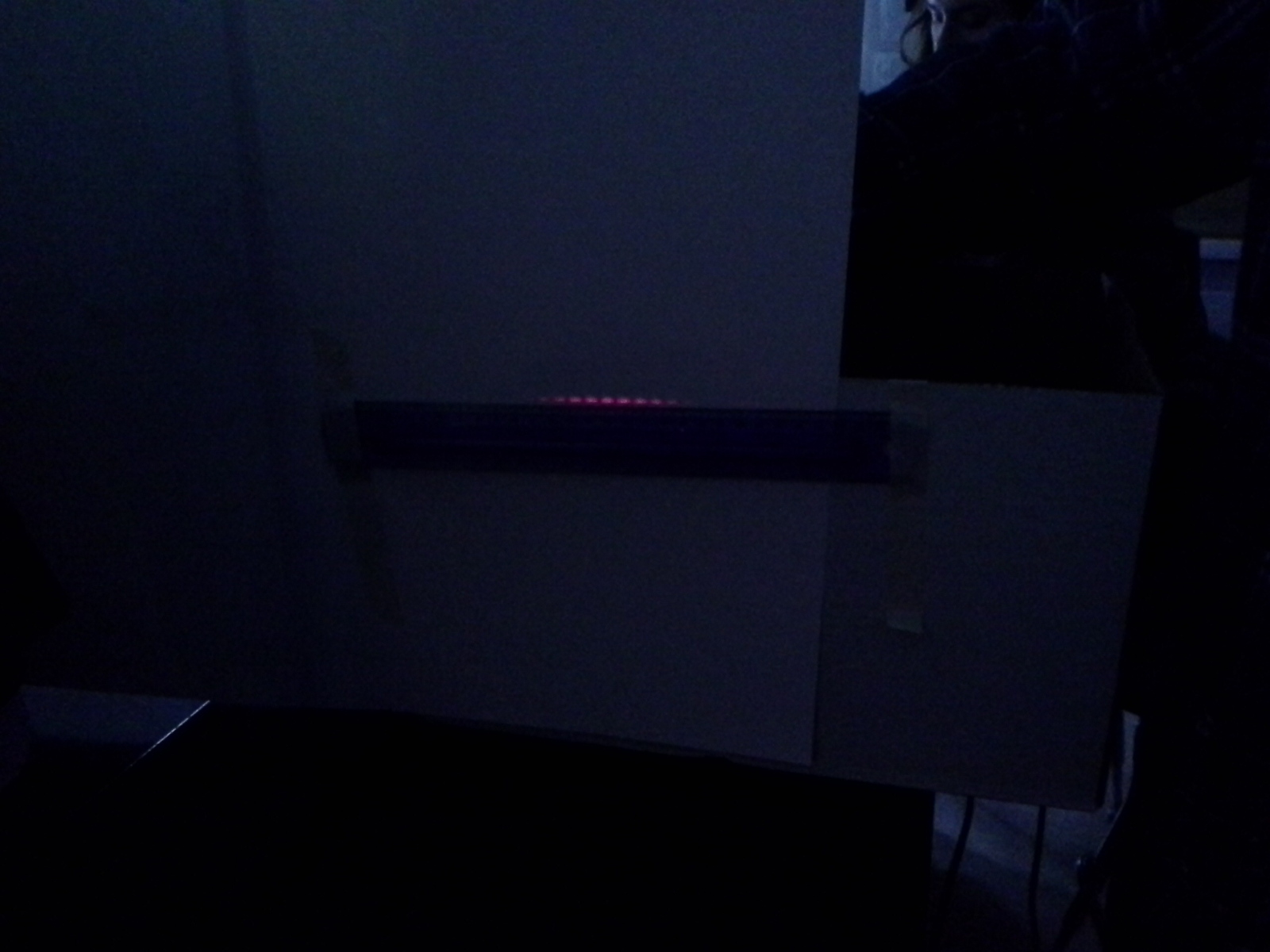 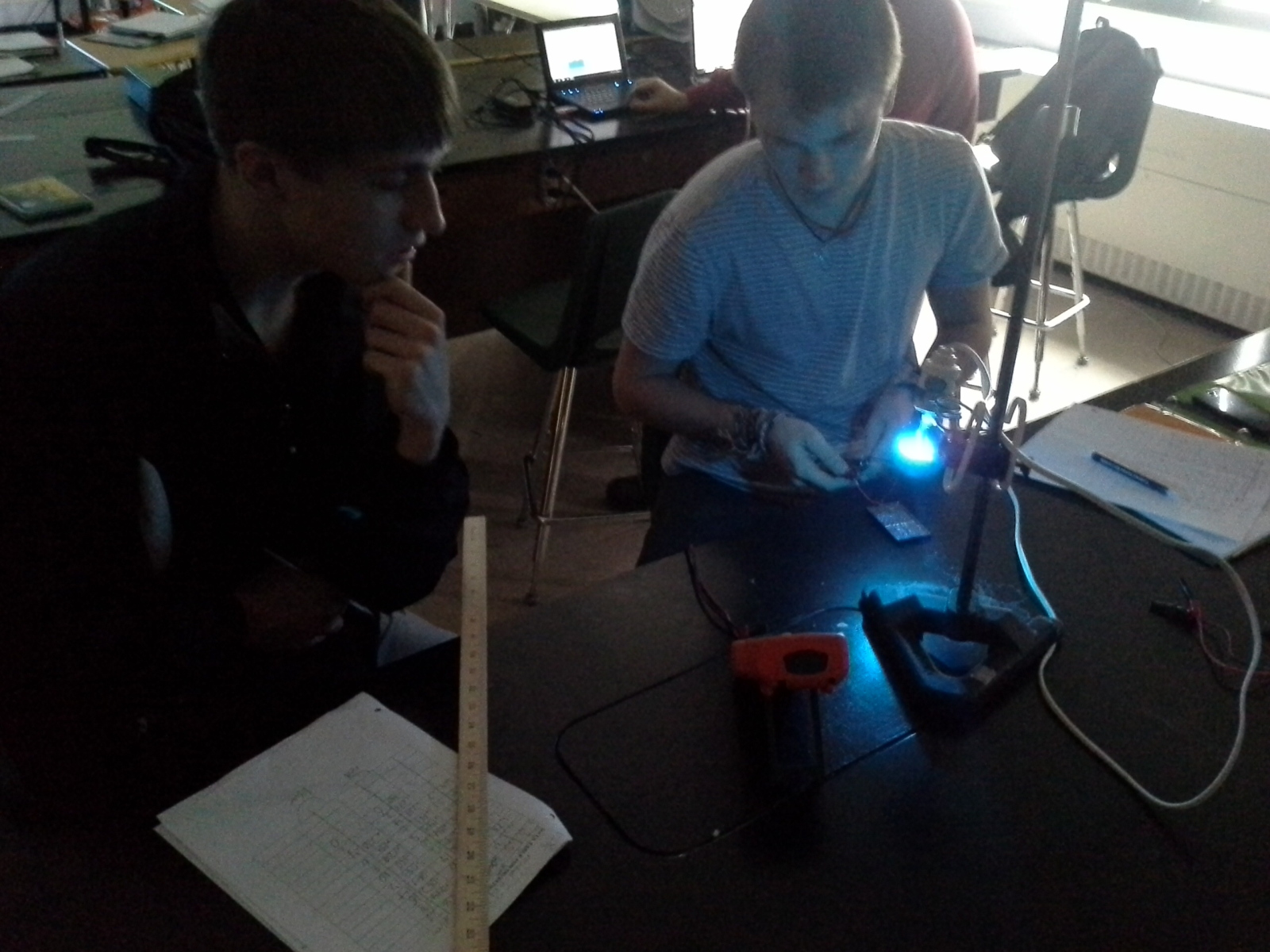 This team is using the green bulb at the same station. The girl on the left in the photo records the voltage across a 100-ohm resistor as a measure of the photocell's electric energy output. 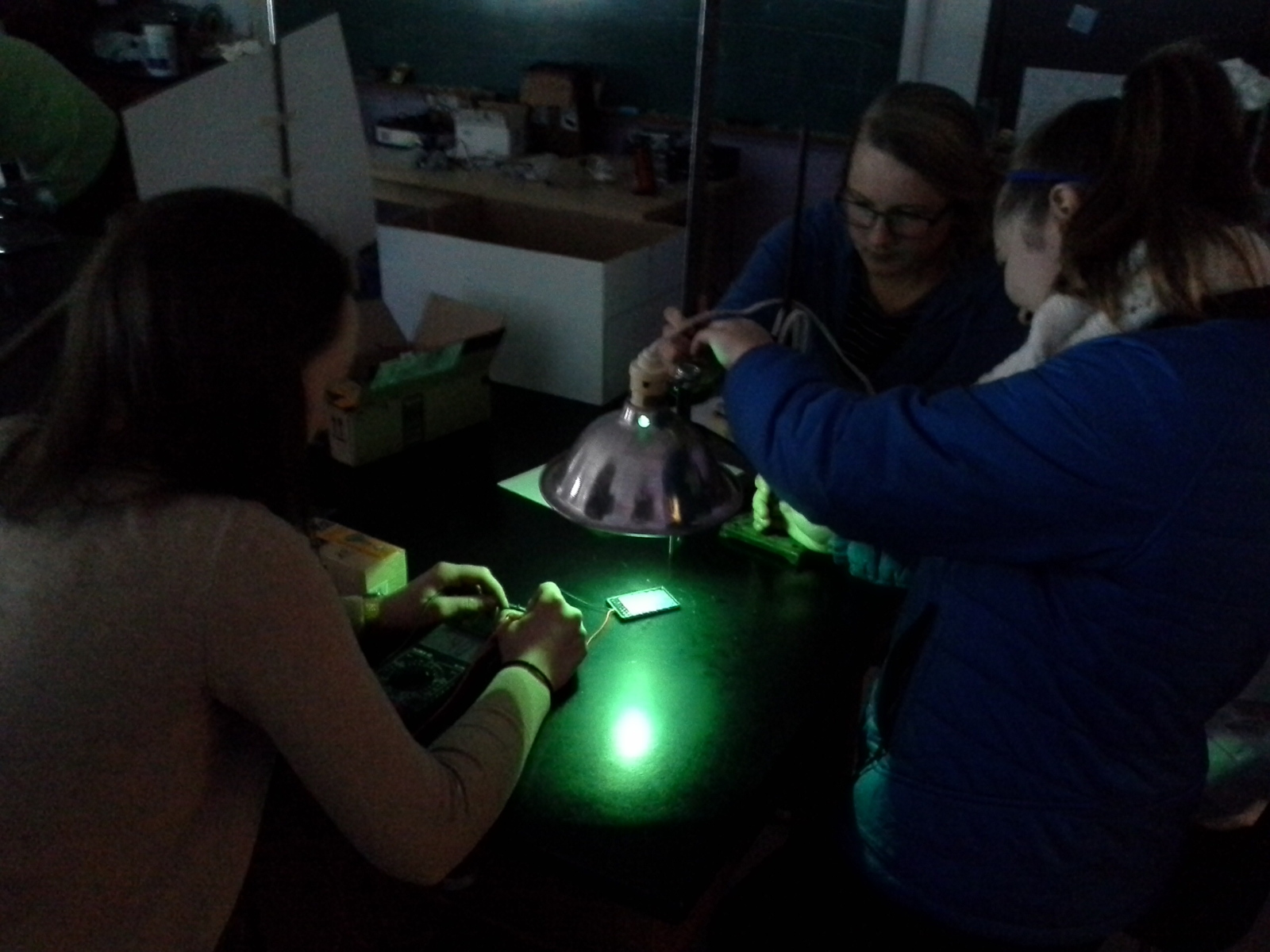 Here, four girls are at the first stages of the wind turbine station. The black object on the lab stand is a small-scale turbine with a small rotor on one end and a magnet on the other end of a rotatable shaft. The magnet turns inside some coiled wires which are attached to an external 100-ohm resistor. The fan creates a variety of conditions that impact how fast the turbine blades turn. 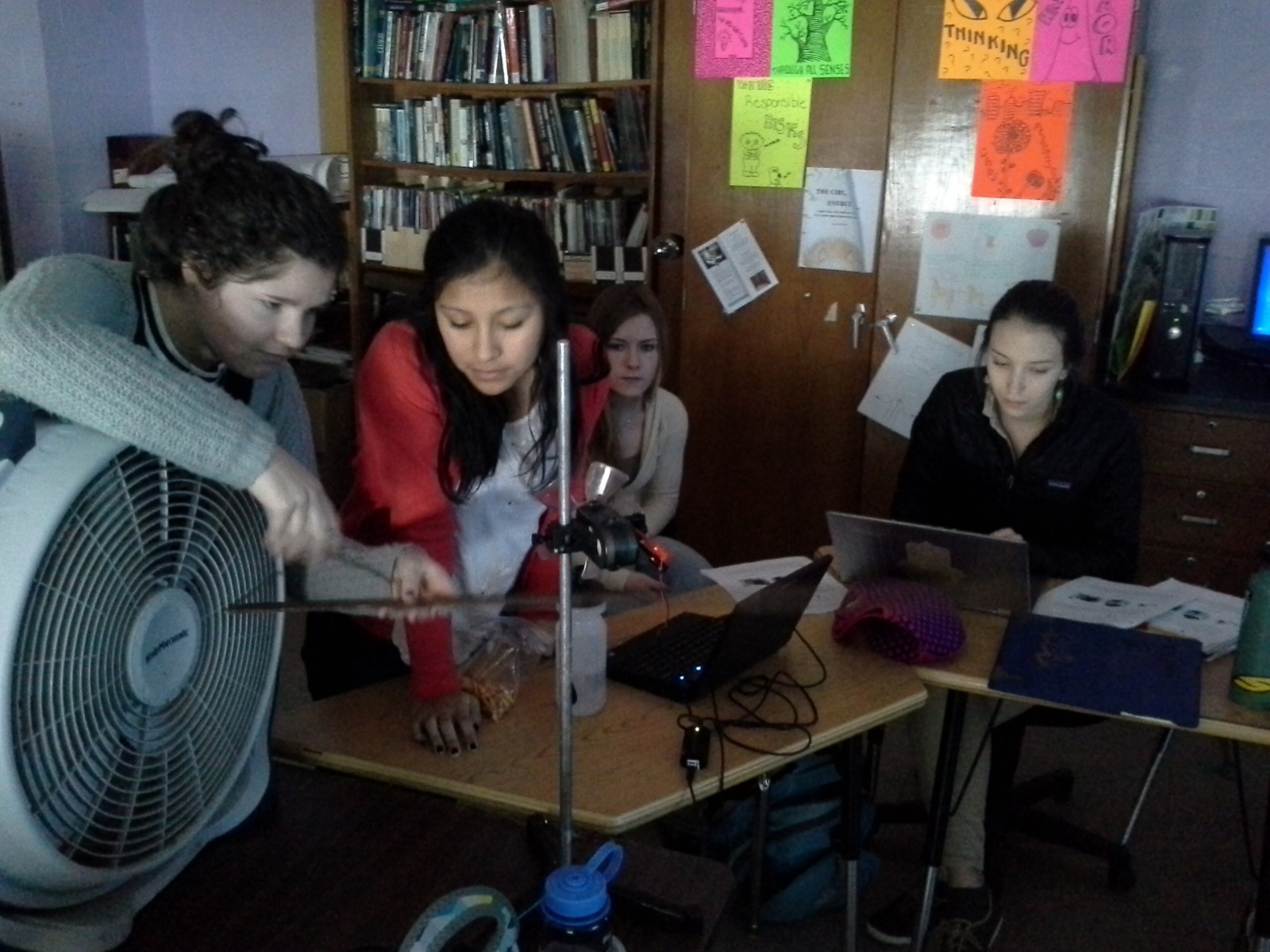 Teams work at a station until it is clear - via consultation with me - that they have sufficient data. At that point, they decide which station to explore, based on their needs and the availability of materials. Teams with experience at a given station are encouraged to share their insights about effective techniques and strategies but each team is expected to collect its own data set.

Though in previous classes we have reserved some time at the end for sharing exemplary data, we do not take that time today. It is a concession to the need to bring this activity to a close soon. Students work at their stations until it is time to clean up - perhaps just five minutes to do so.