SWBAT identify the differences in the three main states of matter by using a computer model to observe particulate motion.

The state of matter in a pure sample is determined by the kinetic energy of the particles and the attractions between particles.
Lesson Author

This lesson is designed as an introduction to the molecular behavior of the various states of matter.  My students learn the physical characteristics in middle school, but nothing about the kinetic molecular theory.

While we won't go completely to kinetic molecular theory by name, it is important that students understand how molecular behavior varies in the three states of matter.  We will later use melting and boiling points as observable bulk properties to compare the level of intermolecular attraction in various pure substances.

This activity continues our use of Science and Engineering Practice 2: Develop and use models.  The computer simulation is an invaluable tool to modern chemists as evidenced by 2014's Nobel Prize in Chemistry being awarded to a team of chemists and computer scientists for their modeling of chemical structures.

We connect to the Energy and Matter Cross Cutting Concept that states Energy drives the cycling of matter within systems.  Here students will observe the impact of adding or taking away thermal energy on samples of matter.

We also begin our exploration of HS-PS1-3: Plan and conduct an investigation to gather evidence to compare the structure of substances at the bulk scale to infer the strength of electrical forces between particles.  Although we won't get to the planning and conducting of an investigation, we will address the remainder of this performance expectation in this unit.

There are two States of Matter simulations on the PhET site.  This year, I chose to go with the "Basics" one, as my district is not requiring students to investigate the effects of pressure on phase changes, or to learn the triple point graph.  In the past, under our old curriculum, I would have used the standard one to have students analyze molecular behavior in light of the triple point graph.

When students enter the room, I am returning the papers from their Ice Cream Lab.  When the bell rings, I ask them what they learned from making ice cream.  Sample responses are:

I then ask them how the milk was different from the ice cream.  They respond that it was liquid, and the ice cream was more solid.  If this doesn't come straight out in a class, I coach them to think how they were the same (color, contents of the bag) and then how they were different (temperature, ability to hold shape).

I then ask the class if they could describe how the molecules were behaving in each sample, the milk and the ice cream.  A student or two may take a stab at the molecules being closer in the ice cream.  If so, I ask how they know that and the justification is "it felt thicker".  I praise this idea, and ask if there are any other thoughts.  If there are additional student responses, we take them and assess them based on what we experienced.  If students are silent, then we move on.

I tell students that we are going to investigate how particles behave in solids, liquids and gases using the computers.  I direct them to move back to the computers with a partner and log in while I pass out the investigation paper.

Students transition to the computers in the lab and load the PhET States of Matter Simulation.  During this time I pass out the States of Matter Investigation 1 paper, and explain to students that the link is on my SchoolFusion class page, or they can go to phet.colorado.edu and search for it.

This year we hit a small snag as a Java update had just been released.  I pause the students and inform them that they can click on "Later" when the Java prompt comes up and still get to the simulation.

While students are working, I am circulating the room checking in.  The first thing I am checking is that they are on the correct simulation, and then that each table understands the directions on how to complete the chart.  The chart, as seen below, asks students to describe the behavior of the particles, and to sketch the particles as they see them. I explain to students that they need not draw every particle on the screen, but enough to represent what they are seeing.

This student did very well on the drawings, but struggled on the behavior descriptions.  For future versions, I think I will change the word "Behavior" to "Particle Motion" 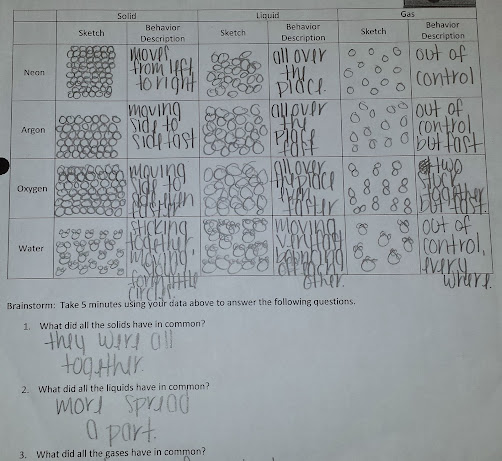 When students have answered the questions regarding the commonalities between how each sample of matter behaved in each state, they return to the front of the room to complete the back of the paper.

When students return to the front of the room, I begin to check in with them to ensure they know how to fill in the Venn diagram of Solids, Liquids and Gases.  Students understand the Venn diagram, but ask if they can include information that they did not encounter on the simulation.  I encourage this so that I can see students' prior knowledge and misconceptions.  While the group in this video aren't collaborating a lot, there is some student discussion from other tables captured in the audio.

For example, on this diagram, students state "some solids can turn into a liquid" and "some gases turn into a liquid".  However, a different student wrote in the center that "they can all turn into each other."  This shows me that even within the group, they didn't communicate about their ideas and self-edit. 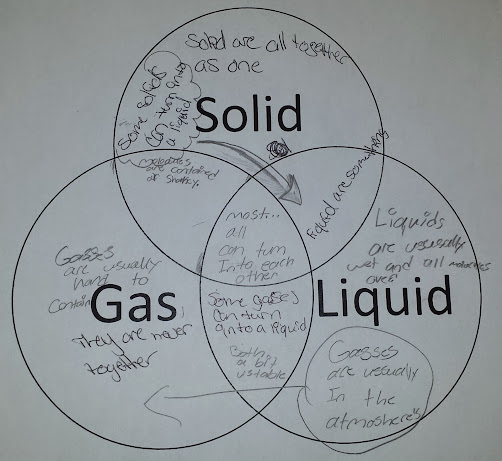 The following student example has a greater focus on the motion of the particles.  This is a great example of students intuiting the kinetic molecular theory.  An example like this is a good one to share the following day to open the class if you wanted to go deeper into the KMT. 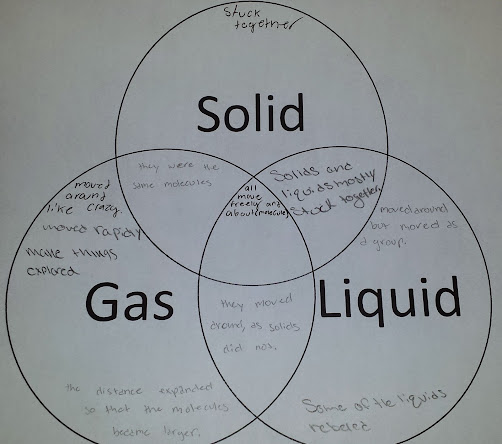 When students finish their Venn diagrams, I have them submit their papers on the way out of class.