SWBAT make slime and describe its physical characteristics while making connections to what happens on a molecular level to change glue into slime.

Chemical reactions create new products by changing bonds; we can compare physical characteristics before and after a reaction.
Lesson Author

Emilie Hill
Los Angeles, CA
Grade Level
Ninth grade
Tenth grade
Eleventh grade
Twelfth grade
Subjects
Science
Chemistry
Chemical Reactions and Balancing
Standards
SP3
Planning and carrying out investigations
SP8
Obtaining, evaluating, and communicating information
XC-SF-HS-2
The functions and properties of natural and designed objects and systems can be inferred from their overall structure, the way their components are shaped and used, and the molecular substructures of its various materials.

Students will be completing an investigation that involves reading about what slime actually is (SP 8) and answering questions about slime before actually making it and then investigating its properties (SP 3), addressing two of the Science and Engineering Practices.

This lesson is structured to help students understand that properties we observe on the macroscopic scale can be caused by the microscopic structure.  This strategy is part of the Next Generation Science Standards Crosscutting Concepts, addressing Structure and Function.  Particularly, Crosscutting Concept XC-SF-HS-2 is directly addressed as students learn first about cross-linking on the molecular level and then see its affects through investigating the slime they make.

Unlike my usual routine of having students answer a question in their warm-up books, because it is Halloween and I want enough time to do an article reading AND a mini-lab activity, I open by passing out the ChemMatters article "The Science of Slime!" by Brian Rohrig for students to read (available at this link: The Science of Slime!).  I print pages 13-15 of the magazine (which is pages 4-6 of the file) to handout to students to read.  While they start reading, I pass out the accompanying Let's Make Slime! handout so that they can read the Pre-Lab Reading questions and begin answering.

I have deliberately written simple level questions so that students are not spending too much time reading for detail.  If this were simply a Common Core ELA in Science assignment, I would certainly write questions that reached into the synthesizing of information levels.  Since it is not, and the timing of the lesson is to coincide with Halloween, I am satisfied with simply exposing my students to the information at this point.

I allowed 10 minutes for this part of the lesson, but depending on how fast students are reading the article, I can extend the time to 15 minutes.

Here are samples of student answers to the pre-lab warm up questions (For a deeper explanation of my Checking for Understanding, see the reflection included): 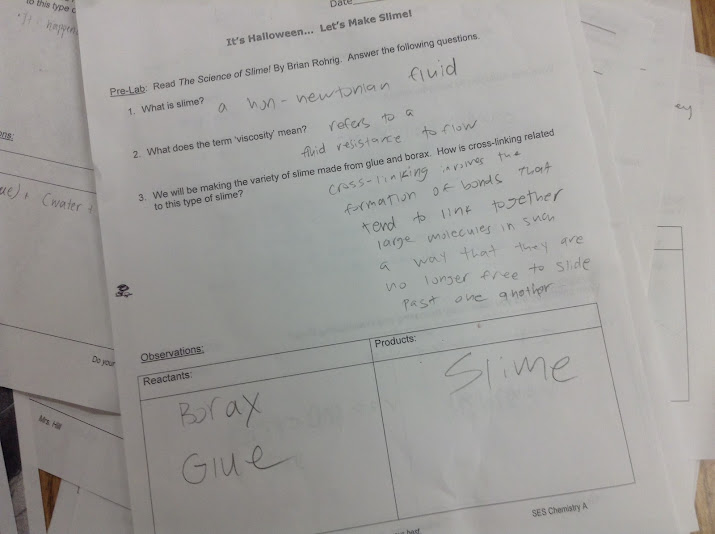 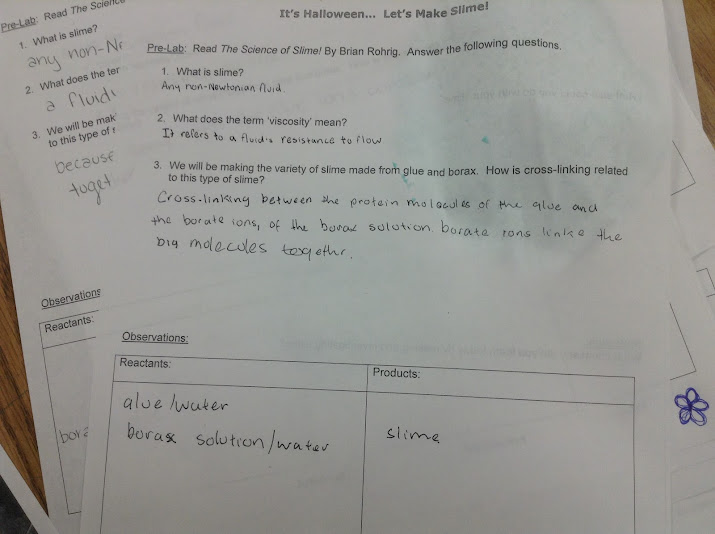 After students have had enough time to answer the questions based on their reading, we take a few minutes to discuss the questions as a class.  I do not write anything on the whiteboard because every student has a copy of the questions.  The questions and student responses should look like this:

2. What does the term 'viscosity' mean?  Viscosity is a fluid's resistance to flow.  Can you give me an example of fluids that are less viscous than water?  Any example that is syrupy and 'thicker' than water will demonstrate understanding.

3. We will be making the variety of slime made from glue and borax.  How is cross-linking  related to this type of slime? Cross-linking involves the formation of bonds that tend to link together large molecules in such a way that they are no longer free to slide past each other.  The borate ions in the borax solution cross-link the larger glue molecules together so that they do not slide past each other creating the slime compound.

I allow 10 minutes for this section because I allow up to two minutes of wait time when necessary so that students have time to really think about sharing their answers (and sometimes build up courage to do so).

I write the “recipe” for slime-making on the whiteboard:

I have a cup of Borax with a plastic spoon available at two lab stations next to a balance so that the Borax cup partners can measure their needed 1 g of Borax.  I also have several graduated cylinders (50 mL capacity) available next to two sinks so that those students can measure the 25 mL of water into their Borax cups.

In order to avoid a gluey mess, I pre-pour the white glue from large gallon containers.  I put approximately 50 mL of glue into plastic cups to be given to the students responsible for the glue cups.  Those students get those pre-filled cups and “eyeball” the water added to make an approximate 50-50 glue-water solution. 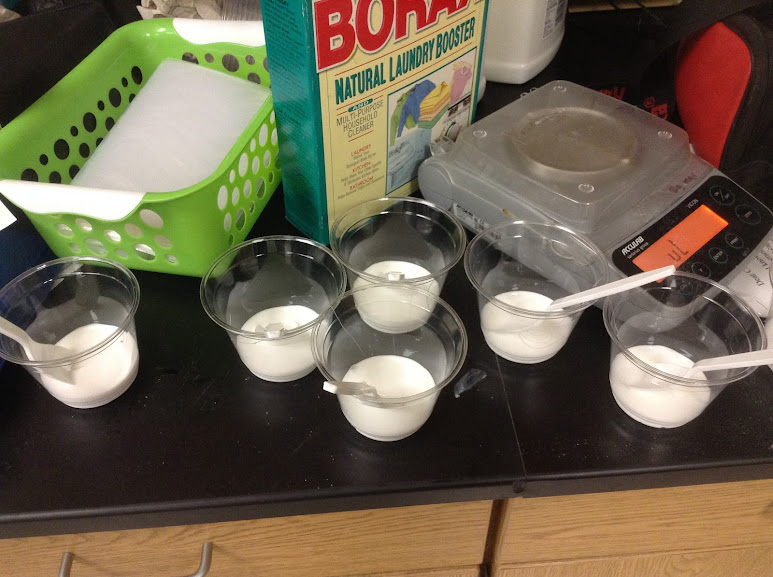 As students finish gathering their materials and return to their tables, mixing the Borax and water or mixing the glue and water, I explain that they can choose to add food coloring to their glue mixtures to color their slime.  This year I have four food coloring choices, which I list for my students: pink, purple, blue, and green.  I ask students to decide what color they would like their slime to be within their pairs.  In the past, especially on Halloween, there have been many messes made by students using the food coloring (some accidentally, many deliberately).  In order to avoid a food coloring catastrophe, I distribute coloring myself.  I tell students that I will call out each of the four colors, and if their group wants that color, they should send the glue cup partner up to get the food coloring.

When I call a color and students come to the front with the glue-water cups, I add 2 drops of food coloring in the cup.  An added bonus to me controlling the food coloring is that it does not get misplaced or lost and students are not searching the room for a color they want that has “disappeared.”

I tell students to stir until the color is uniform in the glue mixture.  Then I explain that the Borax partner needs to slowly pour the Borax solution into the glue cup while the glue cup partner keeps stirring the glue mixture.  (This is why having students work as pairs works really well for this activity, but it is possible to complete as an individual as pictured below.)  As the two solutions mix, I explain that students can expect a big booger-like clumpy mixture to form.  This is the slime. 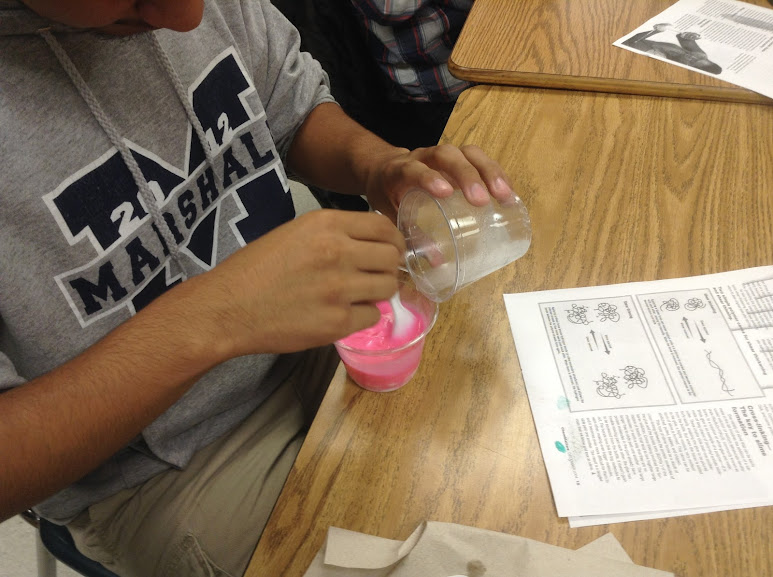 This is what a final sample of slime looks like: 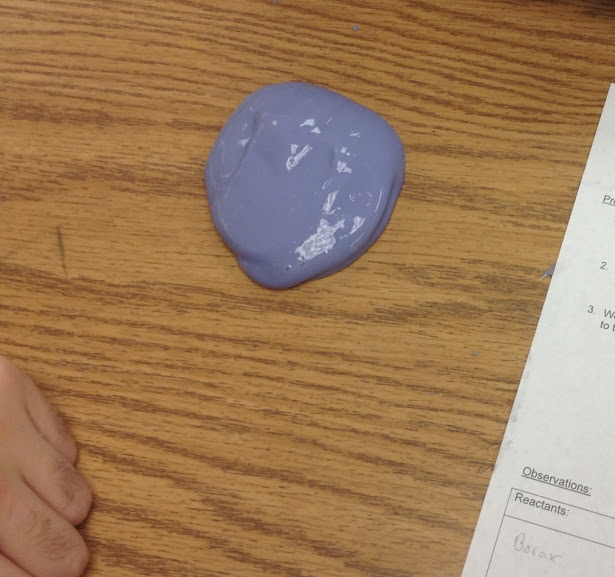 Instead of my usual Reflection prompt that students write in their Warm-Up/Reflection books, I have included reflection questions on their activity handout (similar to what I have done for today's warm-up). 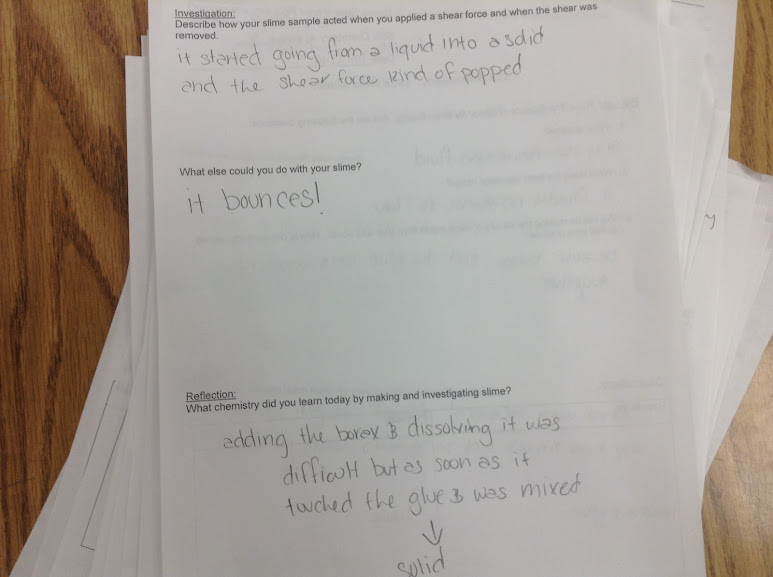