Kara Nelson
, MT
Grade Level
Fourth grade
Subjects
Math
Measurement and Methods
Fractions
Standards
4.NF.A.1
Explain why a fraction a/b is equivalent to a fraction (n × a)/(n × b) by using visual fraction models, with attention to how the number and size of the parts differ even though the two fractions themselves are the same size. Use this principle to recognize and generate equivalent fractions.
MP4
Model with mathematics.

To begin, I asked students to compare 4/8 and 8/4 on their number lines and hundreds grids. During this time, some students chose to work alone while others worked with a partner in their math groups. I took this time to conference with students.

Next, some students volunteered to come up to the board to show their thinking. One student thought that 4/8 was located at 1/2 while another student thought 4/8 was located at 1 whole. Here's the conversation that followed: Where is 4:8?. Next, a student explained how to locate Where is 8:4?. I loved how she drew an area model to show 8/4 as well.

Others watched carefully, checking their own number lines and hundreds grids to make sure they agreed with the students demonstrating their thinking. Here are a few examples of student work during this time:

Again, a few students explained their thinking on the board. Here's the end result of today's number talk: Completed Number Line.

I knew that today's lesson would be particularly important as students to be able to model with mathematics (Math Practice 4).

To begin with, I passed out a roll of Smarties and a copy of the the following Smarties Activity found at Teachers Pay Teachers to each student. 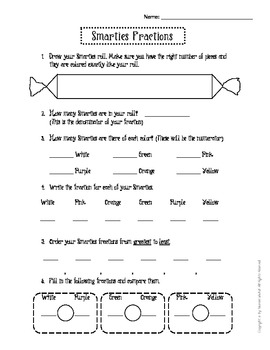 Students went right to work, drawing their Smarties, identifying the fraction of each color, ordering their fractions, and comparing the fractions of each color. It didn't take students longer than 20 minutes to complete the page and discuss their results with their group members. However, the goal of this activity was to help students become familiar with their Smarties prior to moving on to the more complex part of the lesson, finding equivalent fractions!

In particular, I liked watching students stack their candies by color to visually see that that 1/15 white is less than 3/15 purple.

During this time, I conferenced with students in order to help them work through any confusing parts of the activity and to push student thinking.

Here, Finding Equivalent Fractions, a student identified the fraction of each colored candy. At the end of our conference together, I encouraged her to identify equivalent fractions.

I loved watching this student graph his Smarties: Conference Graphing. I took the time to help him connect fractions with graphs as students often struggle with identifying the whole amount represented and the fractional parts.

As students finished, I asked them to flip over their Smarties Activity paper. I then showed them how to fold the paper in 1/2... and then in half again... and then in half once more to create 8 rows. We then flattened the paper, drew lines along the folds, and also created four columns. Here's what the end result of this activity will look like for a reference: Teacher Model of Equivalent Fractions.

I explained and wrote the column headings at the same time: In the first column, let's write "Colors." In the next column, let's make one whole roll of Smarties. I then modeled how to write the colors in the colors column and the fraction of each color in the "1 Whole" column. Students did the same, only using the fractional amounts of each color from their own rolls. We then wrote a fraction to represent the total candies in each roll: 15/15.

I wrote "2 Wholes" at the top of the next column. I then asked: What will the total number of candies be in two rolls? (30/30) We then wrote this in the bottom row. What fraction of the Smarties would be white? Students said, "2/30!" So would you say that 1/15 is equal to 2/30? "Yes!" What do we call these fractions? "Equivalent fractions!"

After students completed listing the equivalent fractions for each color under the column, "2 Wholes," we moved on to the last column and wrote "3 Wholes." I asked: What would happen if we had three whole rolls of Smarties? What fraction would represent the total? (45/45) And what if each roll had the same fraction of each color as the first roll? How many Smarties would be white? (3/45) What fraction of Smarties would be pink? (6/45)

Again, students completed their own equivalent fraction charts using their own number of Smarties. Here are a couple examples:

I explained: For practice today, I'd like for you to continue finding equivalent fractions! I passed out copies of Equivalent Fractions Practice found at Math-Aids.

Instead of modeling how to complete each problem, I challenged students to figure out how to solve each problem with others.

During this conference, Conference 1, I loved listening to the students trying to explain the practice page to one another. The most difficult part of this activity was that students had to find fractions with common denominators to solve each problem. Often, they would have a fraction, such as 3/6, next to a fraction, such as x/8 (missing numerator). Then, students would get confused when 6 wan't a factor of 8!