Glenda Funk
Pocatello, ID
Grade Level
Twelfth grade
College Prep.
Subjects
English / Language Arts
Letter from Birmingham City Jail
Standards
RL.11-12.1
Cite strong and thorough textual evidence to support analysis of what the text says explicitly as well as inferences drawn from the text, including determining where the text leaves matters uncertain.
RL.11-12.5
Analyze how an author's choices concerning how to structure specific parts of a text (e.g., the choice of where to begin or end a story, the choice to provide a comedic or tragic resolution) contribute to its overall structure and meaning as well as its aesthetic impact.
RL.11-12.6
Analyze a case in which grasping point of view requires distinguishing what is directly stated in a text from what is really meant (e.g., satire, sarcasm, irony, or understatement).

Thus, rather than a shift away from both the literary canon and contemporary imaginative texts, the CCSS offers teachers a unique opportunity to embrace innovative approaches to teaching both informational texts and the imaginative literature that led us to teach English.

In its original context, this lesson is part of the unit The Poetry of Nonfiction and Informational Texts: Connecting Genres.

Students will do the following:

This lesson is for Day 2.

30 minutes
Why Work in Groups 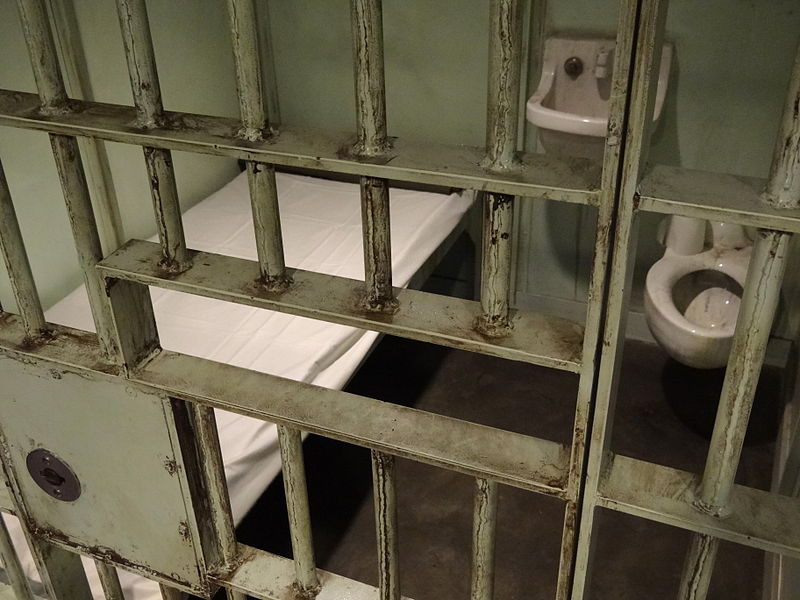 The image above is a recreation of the Birmingham Jail at the time Martin Luther King Jr. was incarcerated there.

Showing students the image recreates the conditions in which King composed the letter.

Before showing the image, I put students in self-assigned groups. Since I divided the letter into six sections, I needed six groups. Next, I ask students to list the group's members on a separate sheet of paper, which allows me to keep track of group membership w/out having to record the information.

I then talk to the students about locating their passages. I have these marked on my copy of the letter so I can walk around the room and show students. This is important because two of the readings begin mid-paragraph.

Now it's time to show the picture and ask for students' reaction to it.

"This is a recreation of the Birmingham Jail where MLK wrote his famous letter," I tell them. "I wanted you to see it so that you can keep the image in your mind as you read and think about the scars such an experience carves on both a person and the African American community whom MLK represented."

I continue: "In a sense, I want you to put yourselves in the physical place where King wrote the letter and imagine what it would be like to be jailed and treated unjustly just because of your race. I know we have students who understand and who have experienced race-based injustices."

After setting up groups, distributing the letter and questionnaires, and having students list group members and locate their passages, I set the timer for 15 minutes and invite the students to "become experts" on their passages. Limiting the timer to 15 minutes pushes students to stay on task, and when the timer buzzes, I then add on a few more minutes for those not done to finish. That way I look generous. It's easier to add time to the allotted amount rather than take time away.

I mill around the room as students work so that I can check their progress and make sure all are working. Student Becoming Experts Student Working in GroupI had to speak to a student about her phone and to one group about working as a group rather than in isolation.

Reporting from the Birmingham Jail

After students finished the group assignment, they reported on their findings, with each group choosing a spokesperson to share the groups findings. I required each student to take notes on each group's section.

While the groups reported and took notes, we also discussed the "emotional" scars inherent in King's letter, and a student took notes on the class "scar map." Class Scar Map for "Letter from Birmingham Jail" I wanted students to have a visual comparable to the ones they created.

After the students report on their group's findings, time remaining can be used for students to read more of the letter than they were assigned in their groups.

Additionally, the teacher may choose to give students a short quiz.