What Materials Block Your Phone's Signal?

Students explore what materials block the microwaves that are emitted or are received by their mobile phones.

The NGSS performance standard HS-PS4-4: Evaluate the validity and reliability of claims in published materials of the effects that different frequencies of electromagnetic radiation have when absorbed by matter applies for this activity as does Science Practice 1: Asking questions (for science) and defining problems (for engineering), Science Practice 3: Planning and carrying out investigations, Science Practice 4: Analyzing and interpreting data and Science Practice 7: Engaging in argument from evidence as students plan out, test and make conclusions about the materials that block their mobile phone signal. 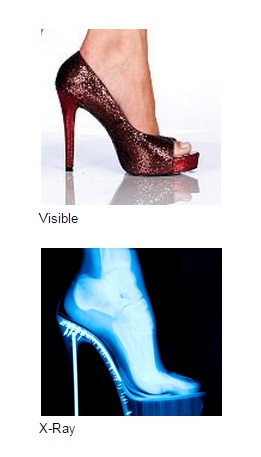 To open students eyes to this invisible world, the previous lesson on Electromagnetic Spectrum Mapping, students' were given a homework assignment to search the internet and find two images of the same object as viewed from two different parts of the electromagnetic spectrum. They place their pictures in a Google Classroom folder I have online .I also asked students to include their sources.

Before class, I review the photos that students submitted and choose a handful of them to share with the class. There are many astronomy photos such as sun and galaxy and galaxy infrared. I tell students that astronomers learn many things about these objects when they view them in other parts of the spectrum besides visible. Things that were previously invisible to our eyes become visible in other parts of the spectrum. For instance, these images of a person's image in infrared allows us to see the persons hands. Similarly, the x-ray picture of a woman's foot in a high heal reveals all kinds of information about the stresses on her foot.

Students are observers for this quick review of pictures, though they are encouraged to ask questions.

"What materials transmit light?" I ask the class. Students raise hands and I call on them. I get answers such as: glass, water, air, some plastics. It is important to start with this question as it helps the students to understand what the meaning of "transmit".

I tell students that today, they test out what materials transmit their mobile phone signal. The question on the Mobile Phone Transparency Lab is "What Materials Block your phones signal?" The materials they test out are on the handout and include:

All of the materials are available in my classroom. Students work in groups of 2 to complete this task, one sheet per group.

Before students begin the task, I give them an overview of how mobile phones communicate. I have two students with phones on either side of the room stand up. If Jane (cellular A) wants to call John (cellular B), her phone does not communicate directly with John's phone. I then have three more students stand up, two of them represent cell phone towers and the third student represents a central computer server (MTSO). The five students represent this configuration.

When Jane calls John, her signal goes out in all directions and connects to the closest tower. Then the tower sends the signal to a central server that searches the network for John's phone. When it finds the tower closest to his phone, it routes the call to him. And this all happens in just a second or two.

The reason I tell this to students is so that they know that phones do not directly communicate so they understand that placing something between the phones does not block the signal. Whatever material they test out must surround one of the phones because they do not know the direction of the closest tower.

Students are excited to do this activity. They begin by reviewing their handouts and look over the supplies. They start with a discussion of how to test if a signal gets through. Most groups decide to test if a signal gets through by one student calling or texting the other. They decide who calls who and how they want to test out the various materials.

They know that their phone must be surrounded by the material on the list. So for the water, students grab a few zip lock bags and test if they get a signal in water.

I encourage students to test out aluminum foil early on. I know that this material can aid them in other tests, however I don't tell them that. The aluminum blocks the signal and they can use the aluminum to their advantage. For instance, the glass jar I have does not have a top. So students can use the aluminum to block the top of the jar. Also, when students have to test out the concrete, I tell them that the walls of the classroom are concrete. Initially, most groups do not know how to test this out. The ask if it would work if one student went out in the hallway while the other stayed in the classroom, but I remind them that the signal does not go directly between the phones and that there are windows and openings throughout the classroom and hallway.

Sometimes it takes a few minutes of discussion, as seen on the Test Concrete video but they eventually figure out that they can hold their phone against the wall and block the exposed parts with aluminum foil. If they get a signal, it had to go through the concrete! 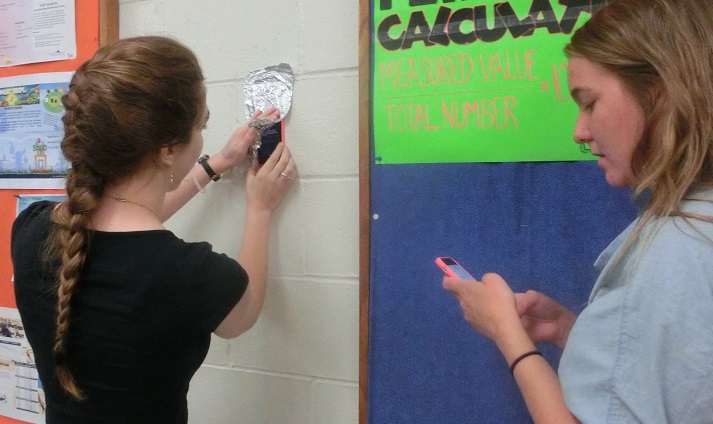 After 30 minutes most groups are near the end of the list of materials to test and we move into a debrief period where we discuss their results.

To conclude the lesson, we review the experimental results of the students' tests. We go through the list and if a group found that a material blocks a mobile phone signal, then they are to raise their hand. The conclusion of most groups is:

I tell my students that our senses are able to detect a very limited range of the electromagnetic spectrum. We can see the very narrow band of visible light and we can feel a little of the infrared part of the spectrum. The rest of the spectrum is either absorbed by our bodies, or passes completely through without us knowing it. Right now, in this space, there are hundreds of microwave and radio waves that pass through our bodies. Music, text, videos, all of this information passes through us every second of every day. Although we cannot see or feel any of these waves with out bodies, we have special devices such as mobile phones and radios that detect these waves.