SWBAT analyze motions that have both horizontal and vertical components.

How are dropping and projectile motions related? Students explore their ideas in this lesson.
Lesson Author

Ryan Keser
Brookline, MA
Grade Level
Eighth grade
Subjects
Science
Forces and Newton's Laws
Acceleration Formulas
Standards
MS-PS2-2
Plan an investigation to provide evidence that the change in an object's motion depends on the sum of the forces on the object and the mass of the object.
SP1
Asking questions (for science) and defining problems (for engineering)
SP2
Developing and using models
SP3
Planning and carrying out investigations
SP4
Analyzing and interpreting data
SP5
Using mathematics and computational thinking
SP6
Constructing explanations (for science) and designing solutions (for engineering)
SP7
Engaging in argument from evidence
SP8
Obtaining, evaluating, and communicating information

In this lesson students analyze motions that have both horizontal and vertical components. This lesson builds off of the previous lesson on gravity to balls that are rolled off a table (rather than dropped) and tossed to another person (rather than up in the air).

Goals for this Lesson:

In this lesson students explore what happens when horizontal motion is combined with the vertical motion caused by gravity. What changes? What stays the same? To investigate this question, they will roll balls off a table and toss a ball back and forth with another person.

They start by imagining the following situation:

Have them predict in their journal what you think will happen and explain why.

In addition to the above questions, they will consider:

Next they try the experiment above. It may be easier to use a ramp to get the ball rolling so that they can focus on dropping the other ball at the right moment. Have them try several variations on the experiment with the ball on the table rolling more and less quickly. In addition to watching the balls drop, they should listen to see if they can tell when each one drops. How does their experience compare with their predictions?

Have students take a look at the first video and create a strobe picture. How does this compare to their observations? 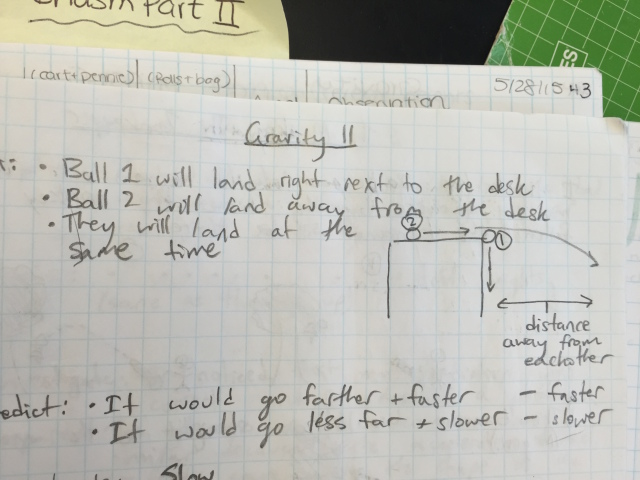 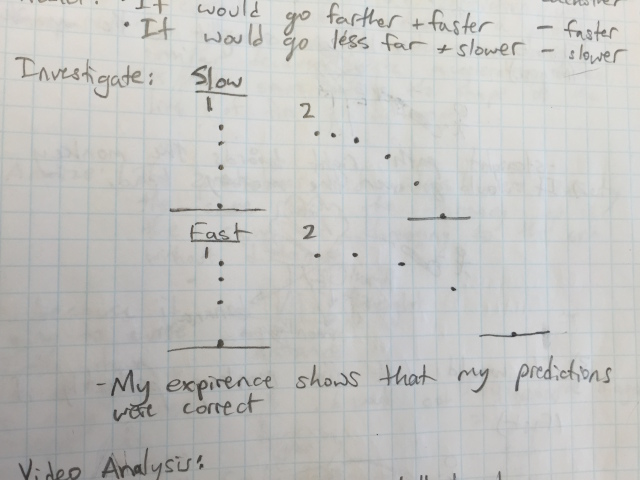 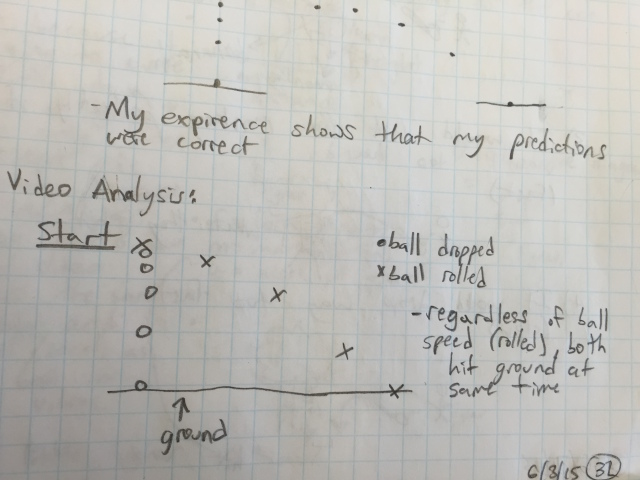 In the second Explore, students compare how tossing a ball from one person to another is similar to when it is tossed straight up.

They being by imagining tossing a ball to another person with a soft arc. How does the motion of the ball compare with the motion of a ball tossed straight up in the air?

Working in pairs, they toss a ball back and forth a few times and not the motions. 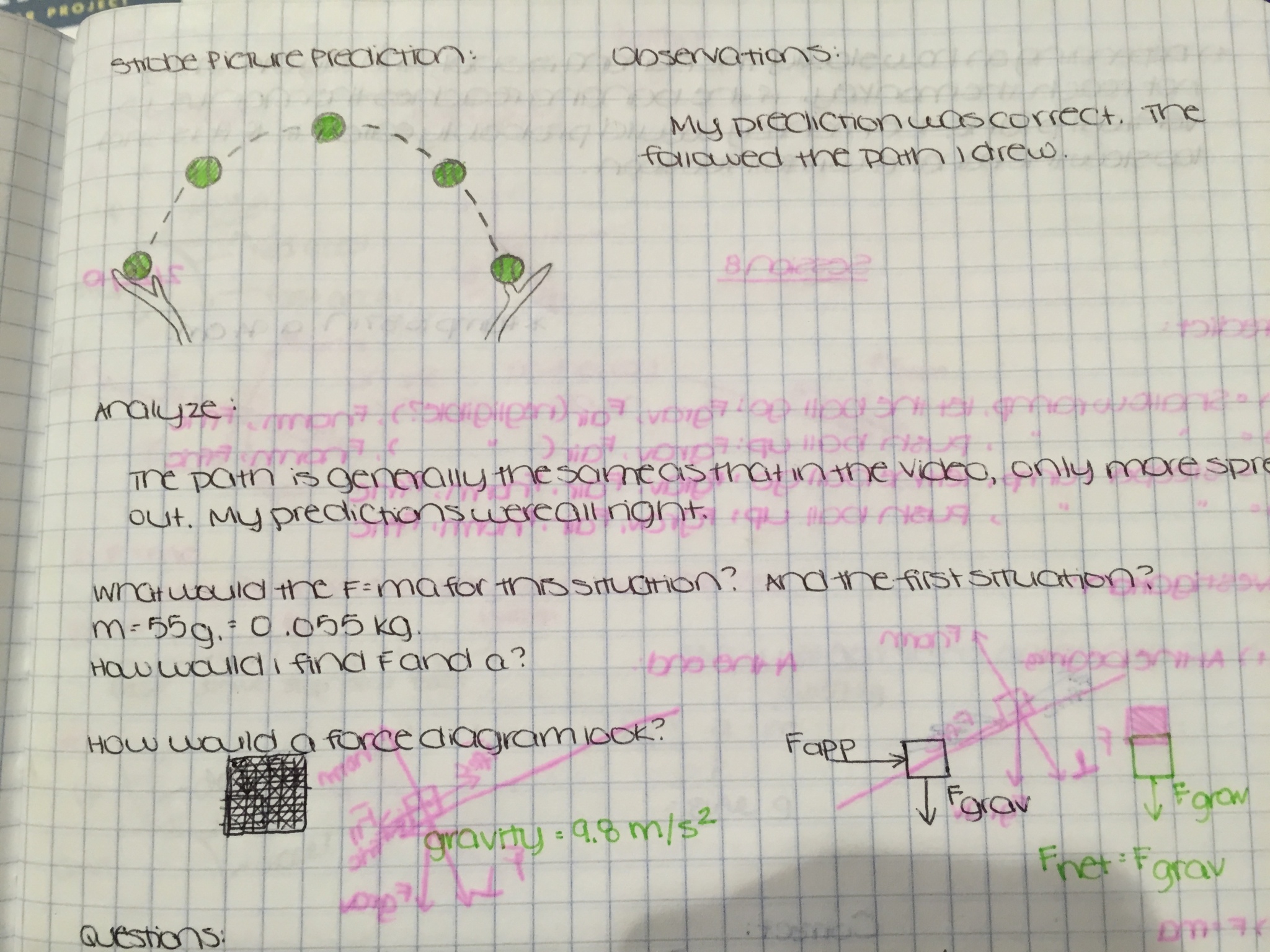 How do their prediction strobe pictures compare with the ones made from the video? What relations do they see between a gentle toss and a straight-up toss?

So far, you've been looking at the path the ball takes as it is tossed or rolled, but it is also helpful to break it up into its horizontal and vertical parts. One way to do this from the videos is to focus separately on vertical motion and horizontal motion, and consider the velocity and acceleration in each direction.

Look first at the horizontal motion.

Study the vertical motion in the same way; drawing horizontal lines through the points on your strobe picture may be helpful.

Considering both the horizontal and vertical motions, what would a force diagram for projectile motion look like?

Because both horizontal and vertical motion each have a size and a direction, physicists think about them as vectors. In order to figure out how a ball moves when it is projected, physicists add these two vectors in a special way.

This reading, Projectile Motion from The Physics Classroom, describes how to think about projectile motion in terms of its components.

After students have completed with parts of the explore sections and analyzed the videos, have them respond to the following questions and discuss their answers with peers:

Based on your experiments, discuss these three questions about projectile motion:

1. Can you throw a ball absolutely straight at a stationary target and hit the mark? If I am standing directly opposite you and you want me to catch a ball, where do you have to aim?

2. How does F=ma show up in projectile motion?

3. View a video (video 4) of a ballerina who demonstrates a ballet moves that illustrate the physics behind a variety of motions. What does this video share with the other videos in the session?

To dig deeper into this lesson, students undertake a classic thought experiment, The Monkey and The Zookeeper. Review the problem before releasing students. I usually assign this as homework, due the next day, and discuss it as a group on the second day of this lesson series.

One idea is to begin the next class with each group discussing their ideas for the thought experiment and then having the table groups summarize their discussion. I act as facilitator and keep my ideas out of the discussion letting the students reach group consensus.

Monkey and a Gun is another video that shows the experiment in slow motion. 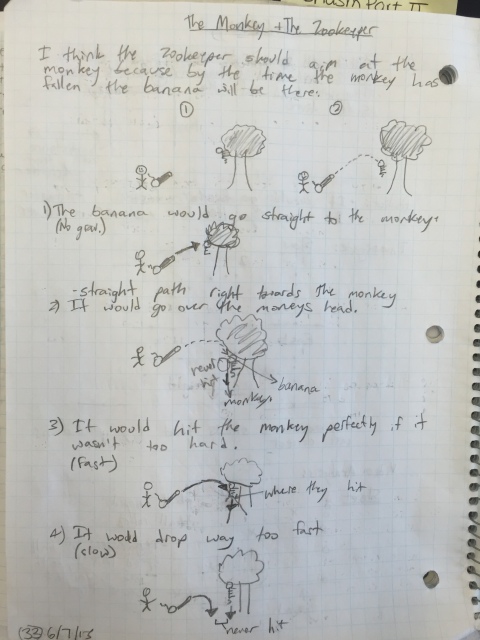 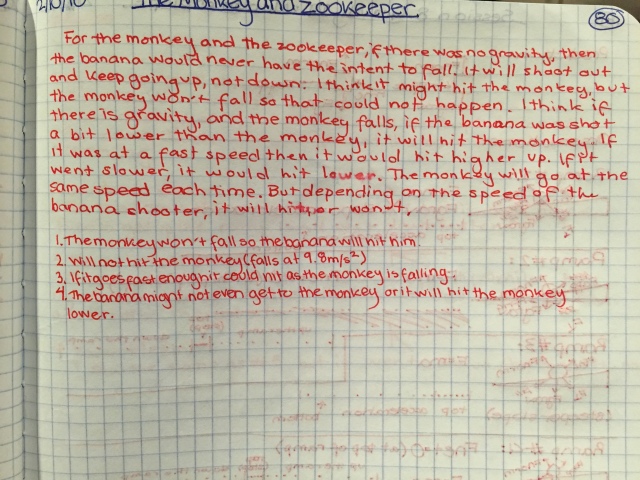 The Monkey and The Zookeeper
Previous Lesson
Next Lesson