In this lesson students focus on how to represent and analyze motion.
Lesson Author

Ryan Keser
Brookline, MA
Grade Level
Eighth grade
Subjects
Science
Physical Science
Motion
Forces and Newton's Laws
Acceleration Formulas
Standards
MS-PS2-1
Apply Newton's Third Law to design a solution to a problem involving the motion of two colliding objects.
MS-PS2-2
Plan an investigation to provide evidence that the change in an object's motion depends on the sum of the forces on the object and the mass of the object.
SP2
Developing and using models
SP3
Planning and carrying out investigations
SP4
Analyzing and interpreting data

In this lesson, students continue their investigation with a focus on just the cart. What is the cart's motion? How does it vary? The emphasis is on representing and analyzing its motions. They will collect data about the cart's motion from video, then create representations that communicate what motion is happening. With their peers they will also look more closely at the complex motion experiences described in the previous lesson with an eye toward identifying the signatures (building blocks) in these motions.

As these are conceptual physics lessons, I ask my students to work through their ideas in the form of thought experiments, a strategy that requires students to grapple with ideas and work out scenarios with a goal of deepening their understanding.

For this first thought experiment, students use the cart and ball model from the last lesson to think about the motion of the objects at three different points along their journey. I lead with this thought experiment at this part of the lesson before they have had exposure to graphing motion using strobe pictures, velocity over time graphs, and force diagrams.

Your students will undoubtedly want you to provide answers to how best to graph the motions. Resist telling them anything other than to use their instinct and record their ideas. The emphasis here is on establishing a baseline explanation that students will later go back to and revise. I give this same thought experiment again at the end of this unit, along with a rubric students use to self evaluate their answers.

Thought experiments are exciting because they allow people to investigate reasons behind why things happen. I explain my use of them in this unit in my reflection.

Here is the Thought Experiment: The Chasm:

Last week you investigated motions of the ball and cart system. Your attention was on all parts of the system—the ball, the cart, the surface, perhaps even a piece of string attached for pulling the cart along. Before moving on to focus on just the motions of the cart—use your life experiences and investigations from last week to consider the plight of Evel Knievel as he encounters the chasm.

Einstein often examined his own understanding of physics concepts with "thought experiments." He would imagine a physics puzzle in the form of a scenario. He did not actually carry out experiments, but worked them through in his head. You, too, have ideas on how the physical world works. Use Einstein's strategy to consider the "Chasm Scenario" below to launch your thinking about motions and forces. (Relax--this is just the start; you'll revisit this same scenario later. Have fun with this. )

Consider your explorations with the ball on a cart. As you think about "The Chasm," imagine that there is almost no friction between the wheels of the cart and the surface it's on.

The Scenario: A ball is sitting on a cart on a flat stretch. A few feet beyond it is a wide and deep chasm. The other side of the chasm is at the same level as the first side.

The Thought Experiment: You pull the cart back (away from the chasm) at a medium speed, then give it a quick push toward the chasm. What happens to the cart and the ball during their journey, from start to finish, including these three intervals:

(a) When you pull the cart back?

(b) When you push the cart forward?

(c) When the cart reaches the chasm?

Ground your explanation in the firsthand experiences you've had.

The Graphs: Draw graphs to represent the motion of the cart for the entire trip, starting from the time you pull the cart back. 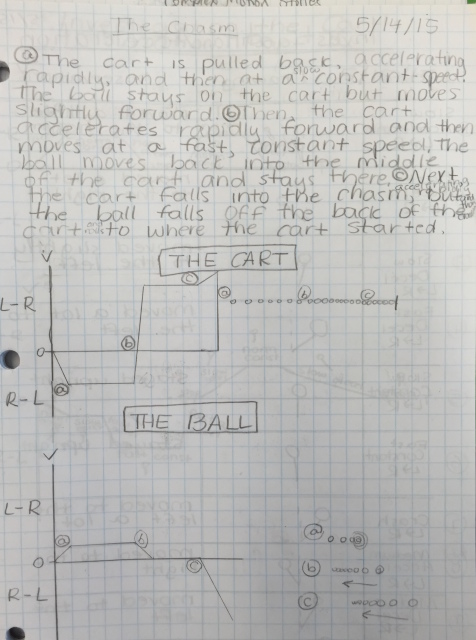 In this lesson students create strobe pictures, also known as ticker tape diagrams. Using simple materials (a computer, transparencies, overhead pens, and the carts) they will create a diagram of each motion that they can use to deepen their understanding.

How to Draw Strobe Pictures

Note that there is only one video for the crashing motion. Students just watch the video and record the data. Emphasize that they should watch the video to the end even though the car has stopped moving after the crash. This should result in them piling up strobe dots in the same location -- where the cart stopped. They will have six or seven data points in the same location. This is the correct way to document a crash using a strobe picture.

The frames of a video are taken at equal time intervals—in the cart videos that's 1/30th of a second. Therefore, videos can actually be used to gather data. By tracking where the cart is in each frame, you can create a record of the cart's position over time to analyze using a single transparency and an erasable transparency pen.

To do a detailed analysis of the motions: 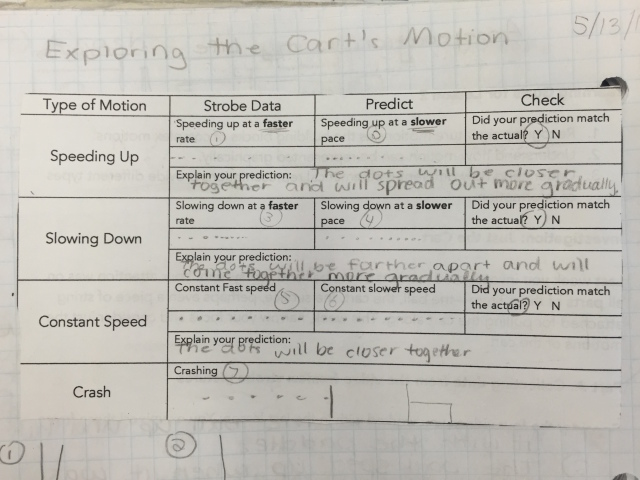 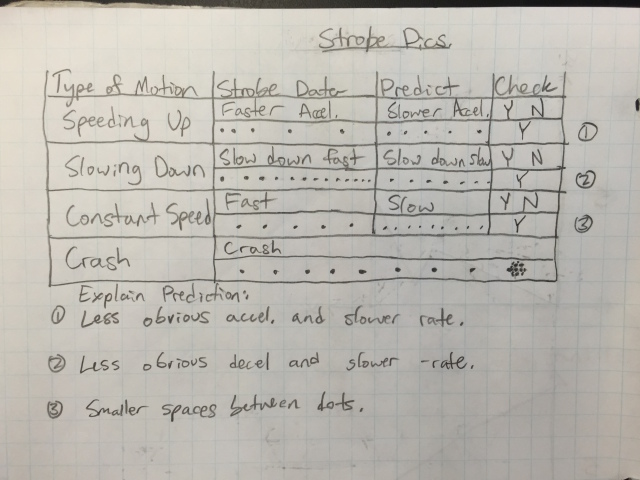 To explain what is happening, I ask for volunteers to first, and share their data on the board. I ask students to offer an explanation of what the strobe picture shows in relationship to the video that they watched.

Since each interval is 1/30 of a second, it might be helpful to draw line segments connecting each of the docs and put the fraction (1/30) between each interval. This creates a visual of the connection that over time the motion is accelerating, decelerating, staying the same, etc., and that helps student understanding.

The protocol for this might run in the following manner.

An equal number of students to strobe picture problems are selected.  All of the students come to the board and redraw their diagram in one section of the board. When they are finished they each take turns explaining their diagram to the class. When they are completed the teacher then turns to the class and asks a " What do you think class?"   type of question. The teacher then calls on students who may have some feedback if they agree or disagree with the graph. The teacher facilitates this discussion not to be critical but helpful for everyone's understanding assuming that some students in the class may have made similar mistakes or have the same answer. This pattern continues with each student so that at the end of class the correct answer has been identified and misconceptions uncovered.