SWBAT conduct their own investigation to speed up or slow down the reaction of alka seltzer with water and present their findings.

Evidence for the collision theory of reactions can be found in common chemical reactions.
Lesson Author

The final part of this project stretched over two and a half days.  I am presenting it here as one lesson, "Day 3".  It follows two previous lessons, described briefly below.

Day 1 baseline testing and reaction rate change planning and the Day 2 inquiry investigations went well, but now it is money time.  Can the students explain their results using the evidence from the lab, and apply the macro-scale observation to the nano-scale behavior of the molecules?

For this part of the investigations, I am blessed to have a large classroom with both student desks in the front of the room and lab stations in the back.  I can put each student group at their own table with their poster to work.  I put out boxes of scissors, markers, colored pencils and glue sticks.

The final assessment piece can be done in multiple mediums: slide shows, Prezi presentations, narrative lab reports, or posters.  We selected posters with the hope of being able to put some up in the hallway on our display boards.  Next year this may be differentiated in terms of how students present their final findings as we were able to explore different options.  For additional suggestions on how to vary this lesson, please see this reflection.

The final part of the investigation is linked to the following standards:

50 minutes
Variations on this Investigation

When students enter the room, I have their posters out, along with our art supplies, and allow them to get straight to work.  While they work, I circulate the room and check in with groups to ensure that they are on the right path with their explanations, often prompting them to refer to their rubrics to decide what score they believe they would get based on what is on the poster at the moment.

Most students are happy to get straight to work, knowing what they have to accomplish.  However, two groups need some help with understanding their results.  The first group is the pair who elected to use Coca-Cola instead of water to dissolve the Alka-Seltzer, and the second is the group who chose to use seltzer water.

The seltzer water group had a harder time of it, and for good reason, because they were truly seeing a solution equilibrium problem that might challenge my AP students.  Eventually, they realized that the bubbles (carbon dioxide) in the water might keep the water from interacting with the tablet, but it was a harder path for the students to get there.  We had to draw out on a piece of paper how the tablet would look surrounded by water molecules, and then drew in some bubbles to show how the water wasn't interacting in those positions.  The visual modeling really helped them to understand why the rate was slower, without having to delve into the solubility equilibrium concepts.

An area for improvement would be a round of peer grading for formative feedback, so they could adjust their work based on the feedback of others, or from observing the work of others to inform their own work.

Although this is labelled as their explanations, this photo is of a student hypothesis and design explanation.  They indicate their change to the system, and the desired results, alongside a list of all that they are keeping constant. 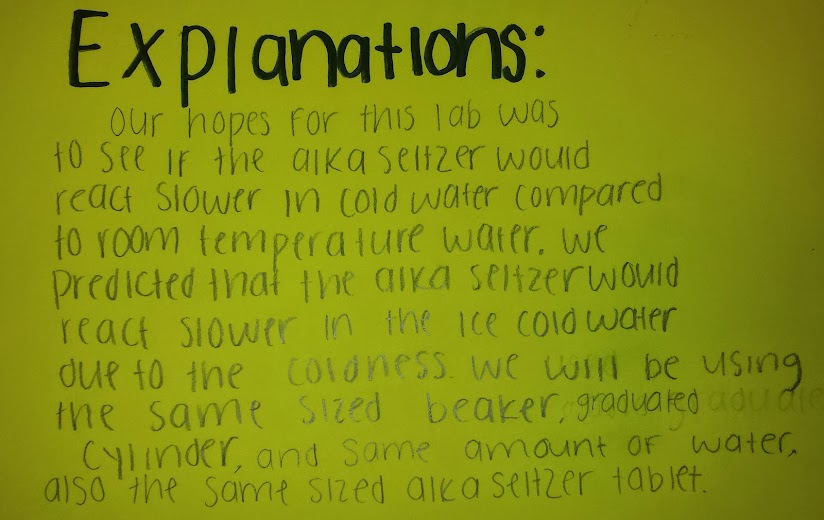 This photo shows an excellent student data table.  The student indicated the difference between each trial, the units of measurement, and wrote it clearly and understandably.  The only improvement would have been to put the temperature without ice and the temperature with ice. 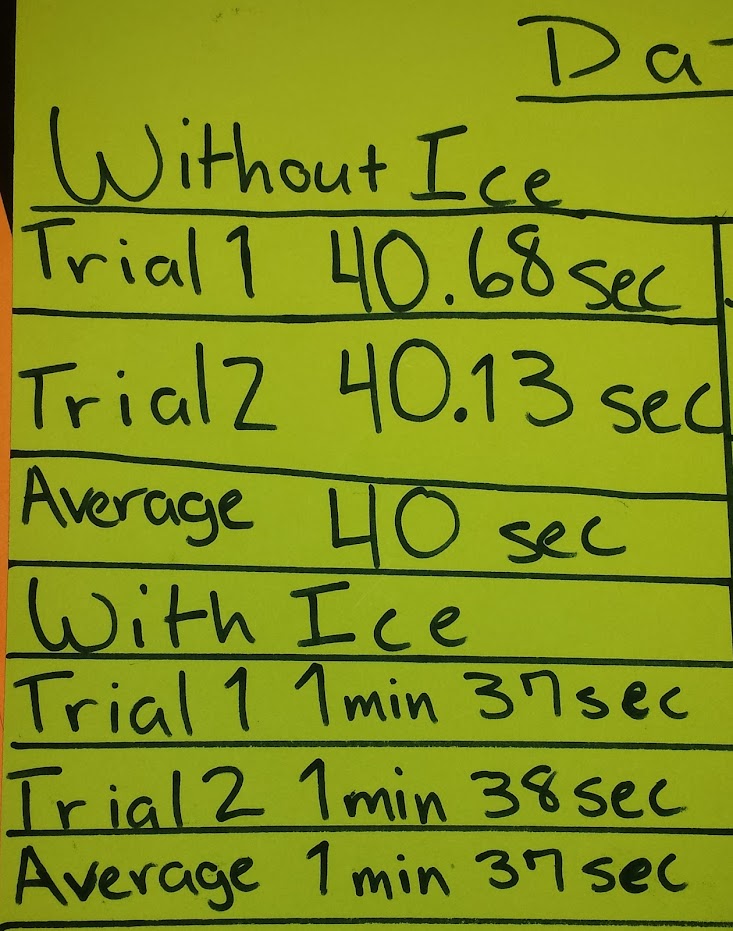 The next two photos represent students' molecular explanations.  The first doesn't get to the molecular level at all in the picture, but represents the macro level very well. 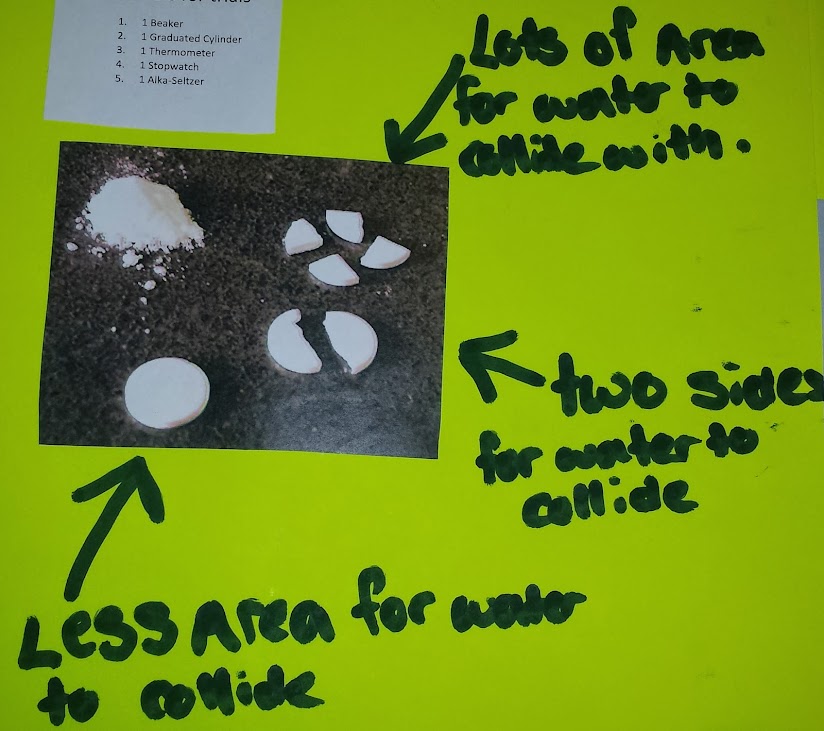 This photo represents a purely visual explanation.  The heated water has more kinetic energy, as represented by the size of the arrows on the molecules. 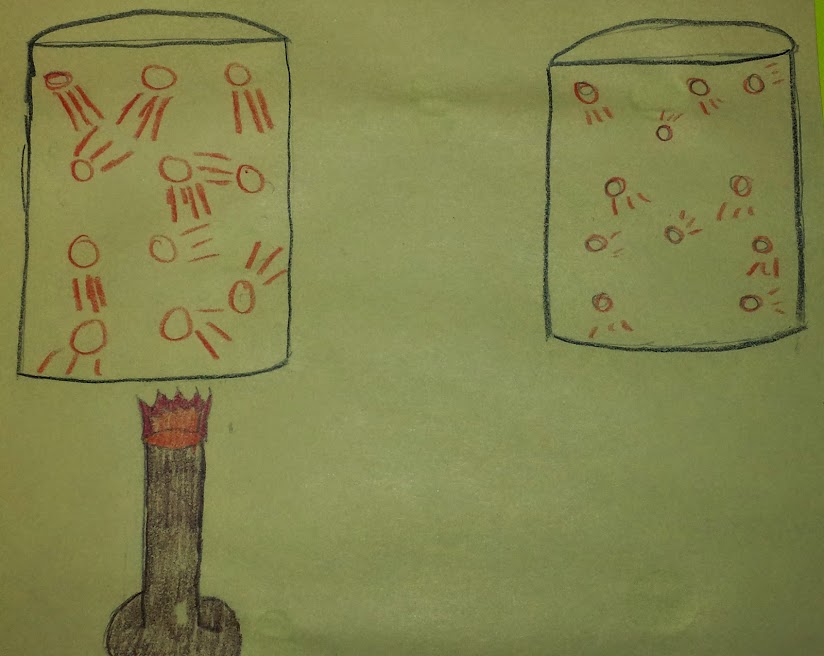 The final three images are of student conclusions.  The first shows a case where the results did not match their hypothesis, but I really like how they extended to think of another way to have sped up the reaction. 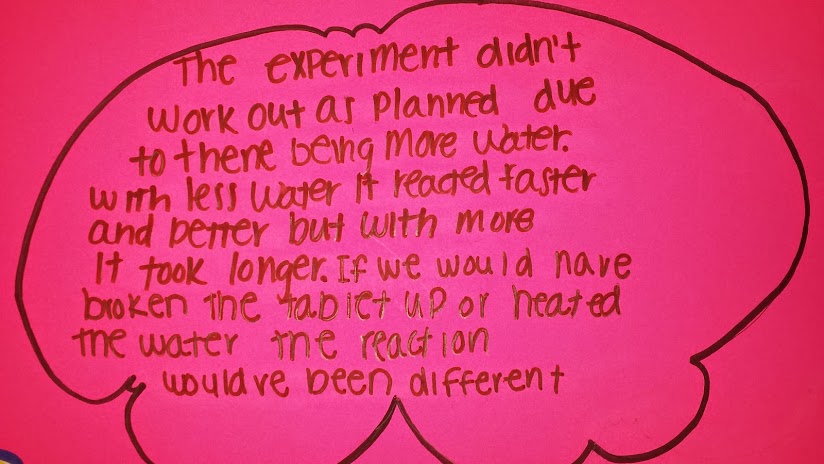 This example showed a student who wrote her conclusion like an essay conclusion.  She states her hypothesis, gives one sentence explaining her results, and then states the confirmation of her hypothesis. While first glance shows a significant amount of grammatical errors, this is a student who is still receiving ELL support, and the organization and focus of her writing has improved so much this year that it was one of my happiest moments grading this project. 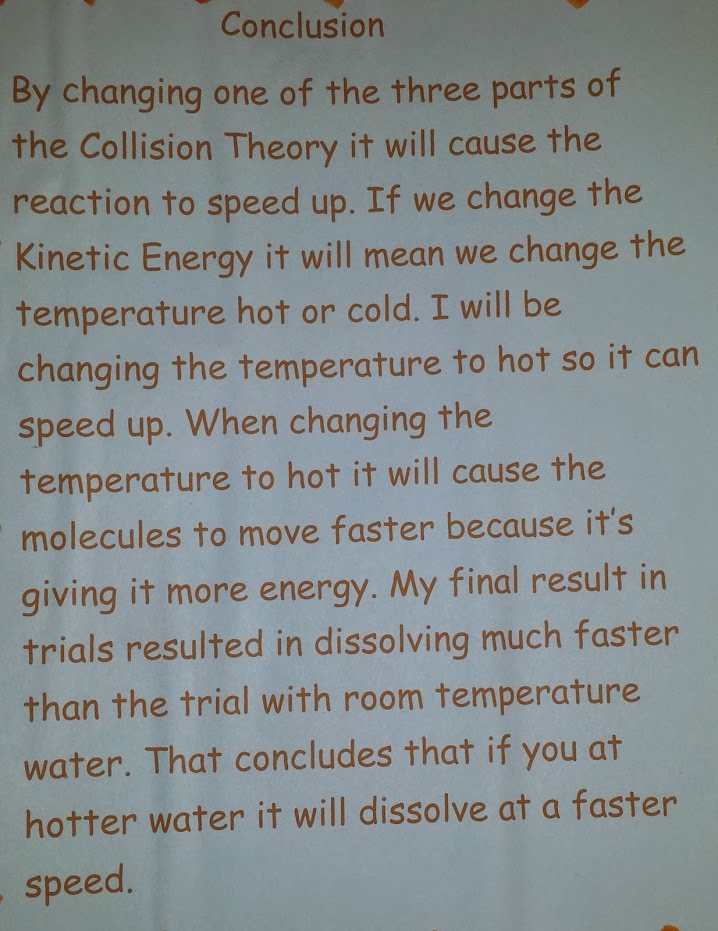 This final example is the best conclusion I had.  The students summed up what they did, what part of the collision theory they were addressing, and discussed their observed results in that light. 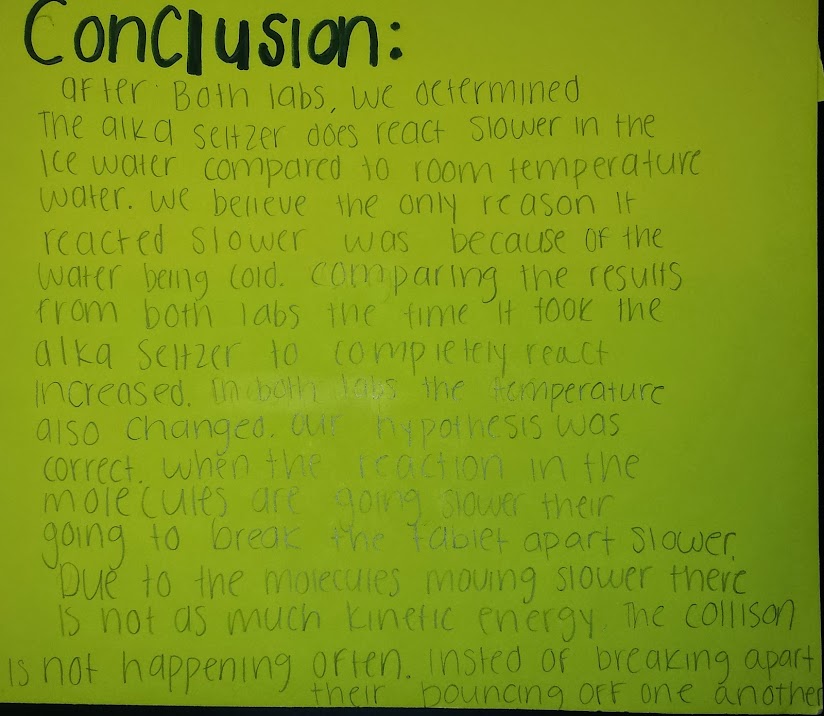 Here is a close-up of the lesson image, which is one of the most complete final posters I had. 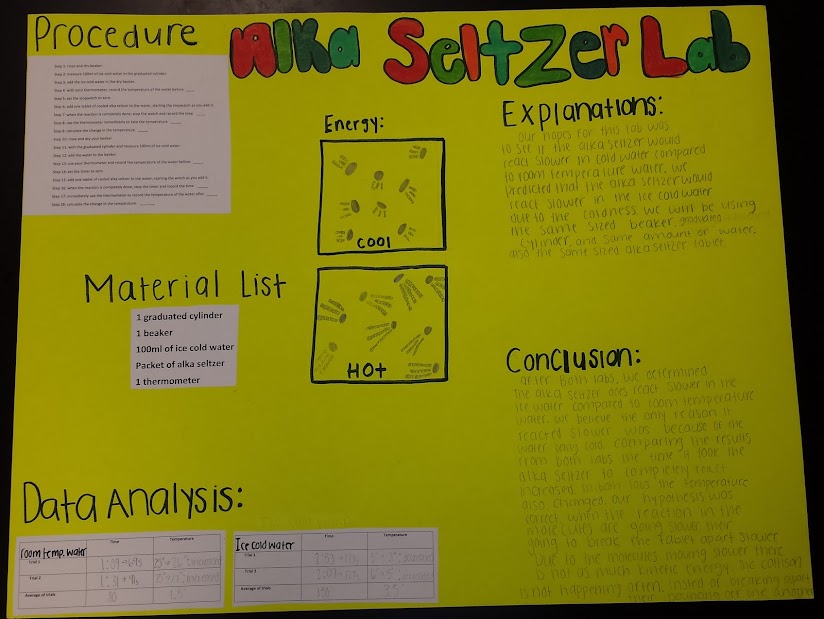 Students did not present their posters, so I graded them with the rubric after class.  Below is a video of me grading a poster, but the rubric is rather blurry, so it is linked here for reference.

After assessing student posters with the rubrics, students had the opportunity to come in after school and address the missing/subpar content.  Rather than revise the entire poster, I had them write it up on a separate piece of paper and attach it to the rubric.  My feedback was only in terms of helping clarify and explain the requirements of the rubric.