Day One of Plaid Pete is Going Down!

What is gravity? Students engage in investigations that lead them to understand the force of gravity on Earth.
Lesson Author

Setting Up the Investigation

Connection to The Next Generation Science Standards

In this investigation, students begin the work that will lead them to explore the Disciplinary Core Idea of Earth's Place in the Universe:  The Universe and its Stars -  that the sun is a star that appears larger and brighter than other stars because it's closer, and stars range greatly in their distance from Earth. (5-ESS1-1); Earth and the Solar System - that the orbits of Earth around the sun and of the moon around Earth, together with the rotation of Earth about an axis between its North and South poles, cause observable patterns.  These include day and night; daily changes in the length and direction of shadows; and different positions of the sun, moon, and stars at different times of the day, month, and year. (5-ESS1-2); Motion and Stability:  Forces and Interactions - that the gravitational force of Earth acting on an object near Earth's surface pulls that object towards the planet's center.  (5-PS2-1) and the Crosscutting Concept of Patterns  - Similarities and differences in patterns can be used to sort, classify, communicate and analyze simple rates of change for natural phenomena. (5-ESS1-1); Scale, Proportion, and Quantity - Natural objects exist from the very small to the immensely large (5-ESS1-1); and Cause and Effect - Cause and effect relationships are routinely identified and used to explain change (5-PS2-1).

The Preparation Time for This Investigation is approximately 15 minutes.

Lab B was adapted from an experiment included in the NASA SCI Files:  The Case of the Phenomenal Weather found at nasawavelength.org

One set of Plaid Pete is Finding Earth's Place in the Universe - Model Analysis Cards for each team (I have printed these on card stock, laminated them, and cut them out and placed them in sandwich bags)

One clear plastic cup per team

One ruler per team

One tape measure per team

One paper clip per team

It's getting to be that time of the year - I am looking for ways to keep my students engaged. I am thinking this scenario will probably do the trick!  I explain to my students that Plaid Pete has some ideas about Science and wants to test them out, but probably hasn't made the best choice about how to do it - and I think it is going to get him into some big trouble! I tell them, "Let's read and find out what happens!  And like many times before when we have read these scenarios - I bet there are some clues about today's lesson!"

Students Read the Scenario in their Teams

I pass out the Plaid Pete is Finding Earth's Place in the Universe - Lab Scenario Sheet - Lesson 4 sheet to my students.  They get their highlighters ready to read the parts Reader's Theater Style in their teams.  I explain that there are quite a few parts today and that students may need to take on multiple parts in their teams.  I tell students that these are the parts:  Cameron, Navjot, Dawson, Jackie, Seth, Plaid Pete, Sage, and a narrator.

Note:  Consistent with the Sheltered Instruction Observation Protocol, I am now including a language objective with each lesson.  These objectives were derived from the Washington State ELP Standards Frameworks that are correlated with the CCSS and the NGSS.

Success Criteria:  I can complete all sections of my lab sheet, demonstrating understanding of the topic.

I pass out the Plaid Pete is Finding Earth's Place in the Universe Lab Sheet - Lesson 4 to my students.  We read through each of the labs.  This is another multi-step lab.

I explain to my students that today, they will only be creating a job list and conducting the experiments for Lab A and Lab B, and that tomorrow - we will be conducting Lab C.

I am also endeavoring to release responsibility to my students.  However, I also know they need prompts and reminders.  Therefore, I remind them to stop and draw their  "before models" BEFORE they proceed with their investigation.  While it would be easier to have everyone move at the same pace, these kids are almost to middle school and I am working towards fostering independence.

My final instruction to students, is that they complete their job list.  This has caused a problem before for one of my teams - they didn't think through the steps and there was arguing about who was to complete which task.  They know my rule:  They must have a completed job list before they are able to get their materials.  If there is any arguing about the jobs - we go back to the list.  If the list was not completed sufficiently - such that it is clear who is to complete which part of the task, and there is a disagreement - the team forfeits the opportunity to engage in that lab and has to observe the other teams.  They hate that!  They know it is worth the time to negotiate the tasks, rather than risk losing the opportunity to do them.

Once my students have completed their job lists, they get their materials and begin working. I am moving between my teams, checking to ensure that they are following the steps - and more importantly - that they are thinking about the content behind them as they complete them.  I am checking to see that their brains are engaged!  This is the most difficult part for a Science teacher I believe - the space and place where things seem most out of control.  There is a delicate balance - where activity teeters on the balance of activity for activities' sake, and activity that will result in learning.  Managing that delicate balance can only come about as the result of experience.  You just have to work through the hard part, until it isn't so hard.

When it looks like students are close to wrapping it up I tell my students, "There is a great deal of Science content behind what you have just done.  Let's look at some of these ideas and try and make sense of them."  We clean up and head back to our desks for the next section of the lesson.

I show the Scholastic Study Jams Video:  Gravity and Inertia to my students.  Sometimes I provide a listening guide for them, however; this is very difficult content.  I don't want them to just write words in blanks that they do not understand.  I want to discuss ideas with them.  I ask them to turn to the next clean page in their Science notebooks.  I have "frozen" the summary page of the video, and we go back to that.  We write the notes from the summary page in our notebooks:

Making Sense of the Investigation

After we take these notes - I have a piece of chart paper on which I have posted the following question:

What happened with the water in the cup?

What happened with the position of the string?

I tell my students, "We have learned some amazing new vocabulary.  I think it is time to stop and pay attention to these before we move forward.  I think we need to make sure we understand this new language before we proceed." 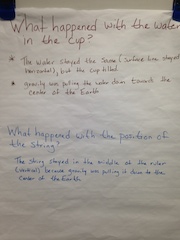 Consistent with the 5E Model for Science Instruction, I have provided a hands-on opportunity before introducing vocabulary. Introduce Vocabulary

I use the following routine to have students write these words into their Science Notebooks:

After introducing the words, I demonstrate for students how to make a three column table with rows for each of the eight vocabulary words.  I model for them in my own Science Notebook how to write the word in the first box, a non-linguistic (e.g. picture) representation of the word in the second box, and work with the class to generate an example sentence for the first word in the third box. Students cut out their copies of the cards and place in the envelope, which they glue on the page behind their table.  They will finish sentences for the remaining seven words either for homework, or for seat-work later.  A completed notebook will look like this Example.

I then ask my students to get out their lab sheets because I would like us to take another look at the models that were created today.

In our last unit, my students worked on analyzing numerical data.  I want them to extend that experience to analyzing models.  I ask my team leaders to get one whiteboard, marker, and eraser for their teams.

I have prepared a set of Plaid Pete is Finding Earth's Place in the Universe - Model Analysis Cards for Each Team.  I tell them, "Please look at the models you have constructed in your team today, then work as a team to use one of the analysis cards to prepare a statement about those models.  We will be sharing these out as a class

I give my students a few minutes to work, and then ask them to share out their analyses.  I will continue to provide opportunities for my students to work with data and model analysis throughout this unit.

Kara Nelson
MT
Urban
How do we stay on the Earth?
5th Grade Science » Gravity