Day 3 of 4--Engineering a Calorimeter: Testing and Re-designing

SWBAT build a first prototype of their calorimeter design, devise a way to test it, and collect data in order to determine possible revisions of the prototype in order to make it more successful.

We can build a prototype that meets certain constraints and performs within specific parameters, and we can test it for success; data collected can be used to inform design changes and re-testing.
Lesson Author

Emilie Hill
Los Angeles, CA
Grade Level
Ninth grade
Tenth grade
Eleventh grade
Twelfth grade
Subjects
Science
Chemistry
Energy and Thermodynamics
Heat Flow
Standards
HS-PS3-4
Plan and conduct an investigation to provide evidence that the transfer of thermal energy when two components of different temperature are combined within a closed system results in a more uniform energy distribution among the components in the system (second law of thermodynamics).
HS-ETS1-2
Design a solution to a complex real-world problem by breaking it down into smaller, more manageable problems that can be solved through engineering.
SP3
Planning and carrying out investigations
SP4
Analyzing and interpreting data
SP6
Constructing explanations (for science) and designing solutions (for engineering)

This lesson is the third of a four day process.  The goal of this lesson series is to allow students the experience of testing materials, designing a prototype, testing it, and making modifications.  The final product (in this case, a calorimeter) will then be used in a subsequent specific heat capacity investigation, LAB: What Metal Is This? Using Student Engineered Calorimeters in Lab.

In Disciplinary Core Idea ETS1.A, students are expected to define and delimit engineering problems, following specific criteria and constraints.  This sequence of lessons exposes students to the engineering design process from start to finish.

During the calorimeter design process, students will need to test different materials to see which retains heat more effectively.  This engages students in planning and carrying out investigations (SEP 3), analyzing and interpreting data (SEP 4), and designing solutions (SEP 6).  Students are engaged in exploring thermal energy transfer and how to prevent it, addressing many core ideas in Disciplinary Core Idea PS3.B: Conservation of Energy and Energy Transfer.

Day Three involves testing a constructed prototype and making modifications in order to improve its function.  Students design their own procedures and tests.

Links to the other three lessons in this series:

Day 1 of 4--Engineering a Calorimeter: What is a Prototype?

Day 2 of 4--Engineering a Calorimeter: Designing and Testing a First Prototype

Day 4 of 4--Engineering a Calorimeter: Modifying and Re-testing a Prototype to Inform Final Product Build

Once I learn where my students are in the process, I know what I need to do to support them in completing their testing process, analyzing those results, and determining appropriate modifications to their prototype for a redesign and rebuild.  The goal is to have a working calorimeter by the end of day 4 (of which this lesson is day 3) that is at least a second iteration so that students have participated in the testing, rebuild, and retesting process.

After gauging where my students are in the process, I ask them to share some of their testing procedure with the class and what their results were.  This is particularly helpful for groups who may need some guidance or feedback from the rest of the class as to how to proceed if they are stuck.  Usually the confident groups are the ones who will voluntarily share out, but as they are sharing, I am scanning the room looking at my student faces and deliberately searching for groups who look hesitant or confused.  I call on them next, asking what they have done so far and asking the rest of the class to provide suggestions when the sharing group mentions any dilemmas or setbacks.

I ask students to tell me what they feel they need to do today in order to achieve the goal of having a working calorimeter by the end of the next class meeting.  (With little prompting, my students were able to share an action plan that included completing the first build, testing it, analyzing their data, rebuilding with modifications, and retesting.)  I write this action plan on the whiteboard in order to keep students focused and to avoid the "what do we do next?" question.

During the Day 2 lesson, student groups received this handout: Group Prototyping -- Heat Container.  Students will continue using this handout, particularly the backside of it, to list their testing procedure, their data collected, and their proposed modifications based on that data.  I did continually remind students that their results needed to inform their proposed modifications.

Here are some student samples of that particular portion of the handout: 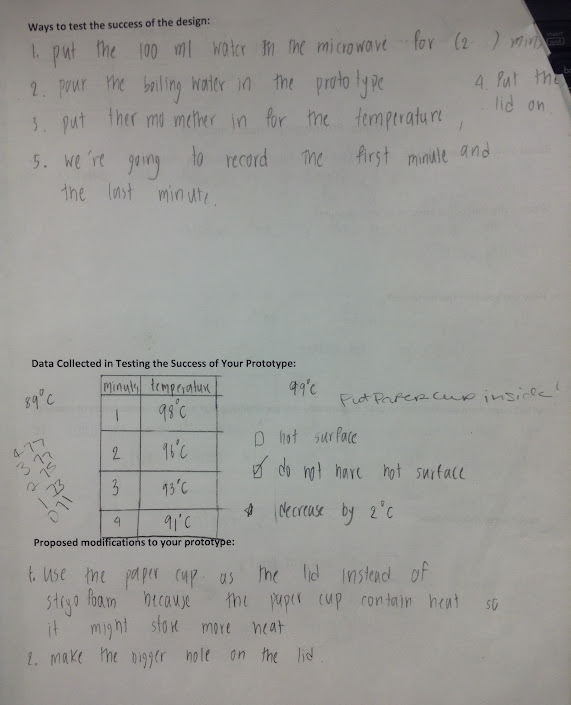 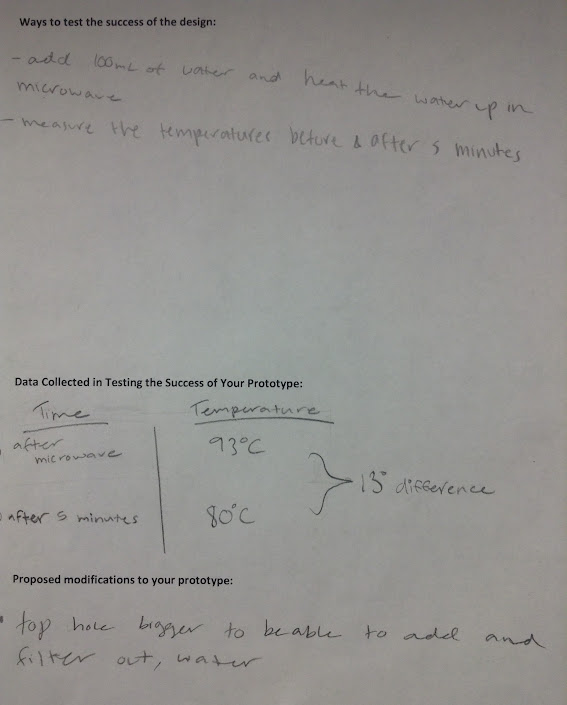 The first two samples show definite steps for their procedure and data recorded that can be compared to later tests of additional prototype designs--most of my honors level chemistry students produced work similar to this.  The last sample is indicative of where a lot of my general chemistry students seemed to fall.  The procedure does not result in a lot of quantitative data that can be analyzed, and the proposed modification was around function and use and not a modification based on collected data.

Chemistry - Day 2 of 4 Engineering a Calorimeter.docx

20 minutes
Engineering is All About the PROCESS

In order for students to acquire another set of cups for a redesign so they could build a modified prototype, I tell students that I need to see their handouts fully completed, front and back.  Most students were able to test, analyze their data, and propose modifications to their designs during the first half of our class period.  Student groups have the option of doing a completely new build (so they had a second calorimeter that they could test and then choose to use the most effective one) or just modifying their current prototype.  The rule still stands that the total amount of materials used in one calorimeter cannot exceed 3 cups. 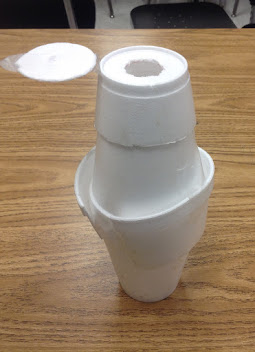 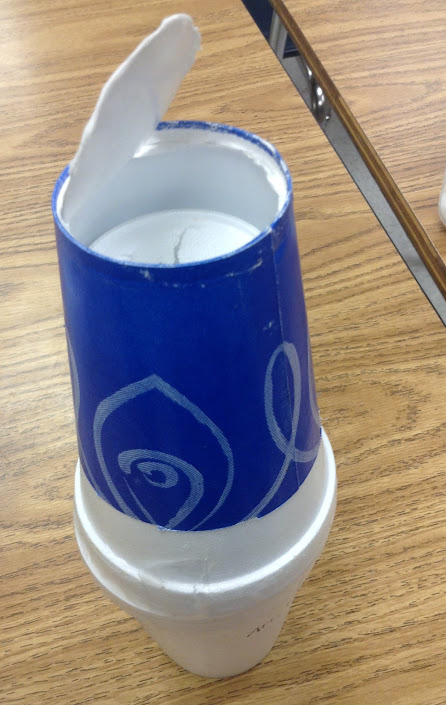 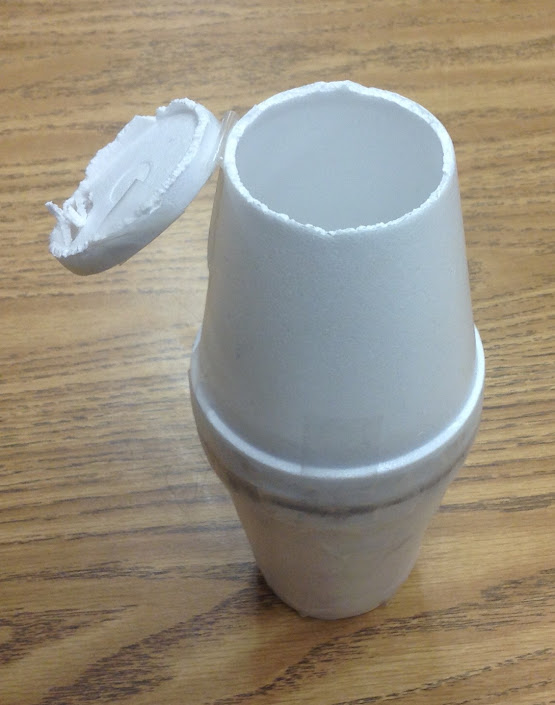 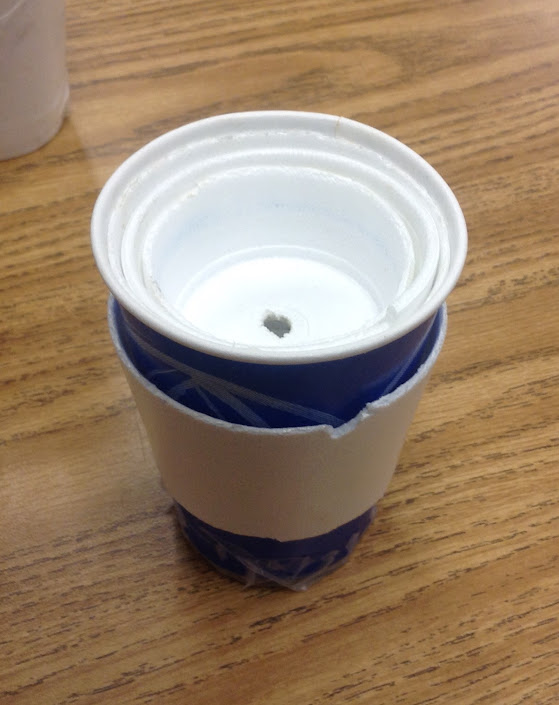 The final step would be for students to have tested their second prototype and decided if their modifications were beneficial, harmful, or had no effect on the heat containing capability of their calorimeters.  Most of my students will need to complete this second round of testing in the Day 4 lesson, the final lesson devoted to this engineering sequence.  For the few students who are ready to do a final build, I want to see not only their handouts completed, but I also want to see their second round of data collected when they tested their second prototype.  This data is recorded on a separate sheet of paper and stapled to the handout. 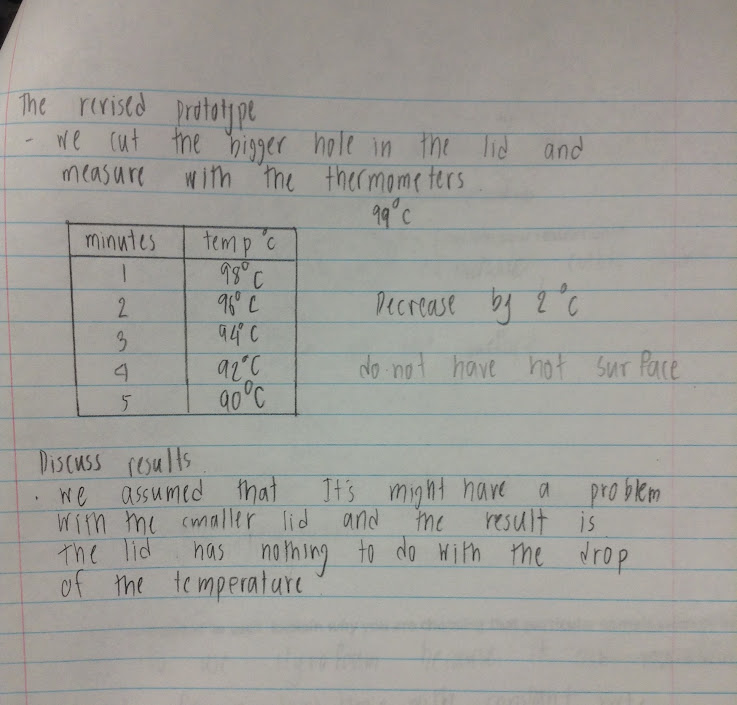 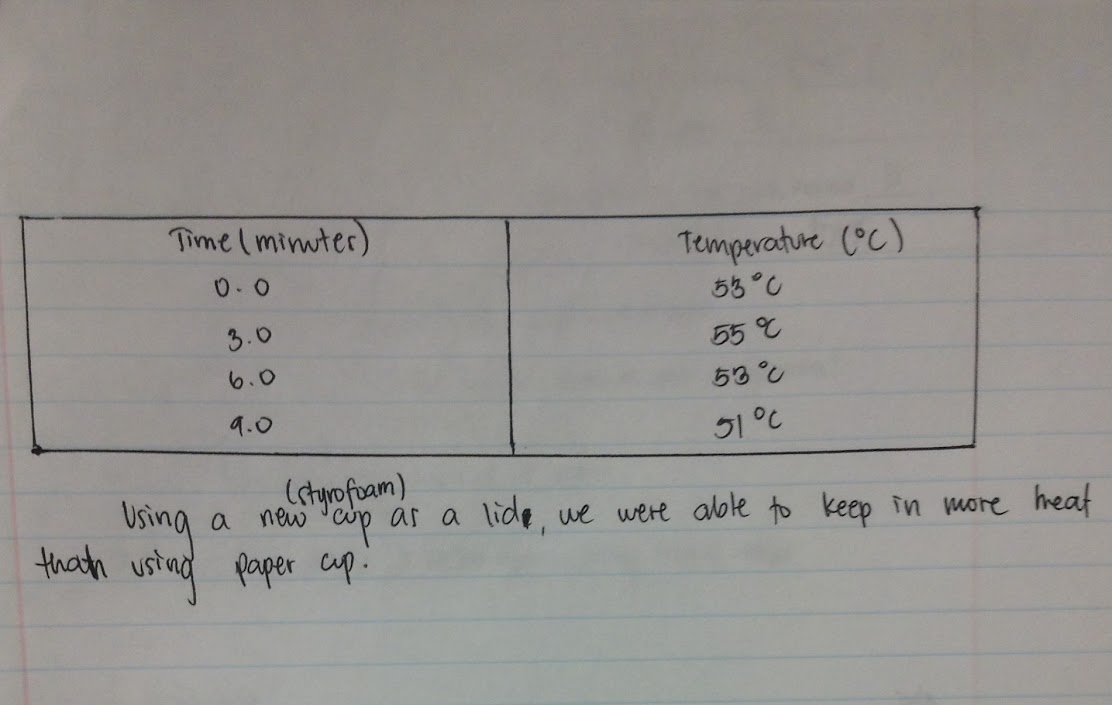