SWBAT use observations and measurements to define reversible reactions and create an initial definition of dynamic chemical equilibrium.

Reactions proceed forward and backward, and these opposing processes reach a state of equilibrium based on many conditions.
Lesson Author

This lesson is the first time students will experience reversible reactions as we begin to teach the concept of equilibrium.  It comes right on the heels of our exploration of reaction rates and collision theory of reactions.

To introduce a topic as complex as this, I want the students to begin by observing some reactions and asking questions.  The first reaction is the classic Blue Bottle reaction of reducing dextrose.  The link is to a purchasable set, but I first learned this demonstration in a college class.  You need:

The second is a complex ion reaction which I first purchased from Flinn Scientific, titled Hot and Cold Equilibrium.  Here, a cobalt (II) chloride solution in alcohol creates two different complex ions with water: blue in hot water and pink in an ice bath.  I will set this up for students to make initial observations as the temperature changes take time to complete.

Throughout this lesson, students will be asking questions (SP1) about the reactions they observe.  Later, they will carry out an investigation (SP3), record and analyze data (SP4) and construct explanations of both the demonstrations and water games activity (SP6).  This is all done to help students begin their work on HS-PS1-6: Refine the design of a chemical system by specifying a change in conditions that would produce increased amounts to products at equilibrium.

Before students enter, I get a hot water bath and ice bath started for the Hot and Cold Equilibrium demonstration.  It is critical to not let the hot water get over 80 degrees because that will boil off the alcohol.

When the period begins, I write the word "Equilibrium" on the board.  I ask students what it means, and gather their responses.  I am hoping for them to get to the word "balance."  I then ask what it means to balance.  If students are struggling, I pose balanced in different positions: leaning left, standing straight, and leaning right.  I ask how they knew I was balanced each time.  Students will respond "You weren't moving" and I follow up with

This will stump students, as we haven't talked about reversible reactions.  So I ask them to get out a half sheet of paper to record some observations of two reactions.  It is important that they record observations to help them engage in the lesson.  Additionally, the limited observations can help them later when they study by reminding them of what they saw.  While they get the paper out, I place the test tubes of the cobalt (II) chloride into the water baths, and get out my bottle for the Blue Bottle demonstration.

I ask students to describe the liquid in the bottle.  They will respond "clear" and hopefully, "colorless." (following our Observation Skills lesson earlier in the semester)  I then ask for a volunteer, and have them shake the bottle.  As the oxygen mixes in with the solution, the methylene blue is oxidized and turns blue.  I ask the students what happened.  Fresh off our work on reaction rates, I expect students to say that the energy of the shaking started a reaction.  The solution will likely fade back to colorless before they finish.

This video is of the reaction, but not from my classroom.

I ask students to tell me what they think happened.  I get another volunteer to shake the bottle and repeat the reactions for students.  I remind students of the words on the board: Equilibrium and Balance.  I ask what is needed for it to be balanced and colorless? "No shaking" and what about balanced and blue?  "Shaking"  I then point out that the reaction is going forward and backwards.  When we shake it, we add oxygen to the liquid, letting it collide and react.  When it sits, the oxygen goes back into the air, and stops reacting.

I then point out the three test tubes in the water baths:  The ice bath is pink, the room temperature is blue, and the hot bath is blue.  I explain that all three test tubes have the same chemicals in them, and ask for students to explain why they are different colors.  I expect students to again run to our collision theory and explain that the hot bath has more kinetic energy, so when it is done reacting it is blue.

I ask students what they think would happen if we switched the hot and cold samples.  I have them make a prediction, and switch the test tubes.  Within a minute, the pink will be turning blue and the blue will be purple on its way to becoming pink.

Video of the demonstration, not from my classroom.

I explain that many reactions are reversible, especially in biology and living things.  Today we will start to look at these reactions, and how they reach and keep their balance.

To begin our investigation, I ask each table to get the following:

When each group has the materials, I explain the Equilibrium Games activity.  I have the groups fold and tear the note card in two, labeling one half "A" and the other half "B".  I tell them to put a letter with each graduated cylinder.  Now I send the person with cylinder A to go fill it about 2/3 with water.  When students ask, I explain that they should be between 15 and 20 mL.

When students return to the table, I ask them to put a single straw in cylinder A, and two straws in cylinder B.  (I was unable to obtain different sized straws for the lab)  I ask the students to measure the amount of water in each graduated cylinder and write it on the first line of their data table.  The set up should look like this: 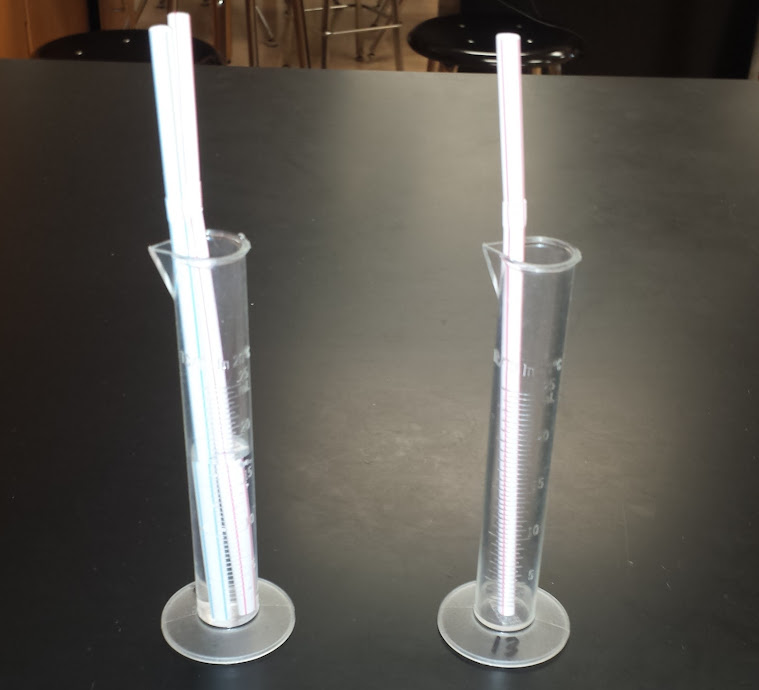 I walk them through a "straw round".  Each partner pushes the straw to the bottom of the cylinder, puts their finger tightly on the top of the straw or straws to trap the water, and then transfers to the other cylinder.

"But there's no water to move out of B!"

"I know, but right now we are learning the process, soon there will be water there."

Once the water is transferred, I have them put their straws back into the cylinder, one straw in A and two into B.  We re-measure our water and record it.  The graduated cylinders do not begin their markings until 2.5mL, so I ask students to estimate for now.

I have them repeat the process as a whole class before turning them loose to work.  I explain that it is NOT a race, they are to each go at the same time, being careful to not spill water.

The process unfolds as seen in this video:

"When you think you have reached equilibrium, call me over to check."

Students work through until they hit equilibrium.  Most students are expecting the equilibrium to be when they have the same amount of water in both cylinders.  The biggest value of this activity is shattering that misconception on day 1.  When a group calls me over, we have this conversation:

"Why do you think you're at equilibrium?"

"The amounts aren't changing any more."

"Are they the same?"

"No, I thought they would be, but they're not."

This puzzles them, and I may need to follow up with "Why aren't the amounts changing even though you're moving water?" before they respond:

"The amounts moving back and forth are the same."

At this point, I use the time remaining in class to decide if they are to do a second round, with starting volumes of their choosing, or just move on to the analysis questions.  This is a student example which did a second round, deciding to start with equal amounts and see where equilibrium ended up.

If students move on to the questions, they will encounter a model from the POGIL.  We took only this part because of the heavy mathematical base for the rest of the activity.  For a day 1 introduction, this becomes a very strong formative assessment of whether or not students understood the concepts from the lab. 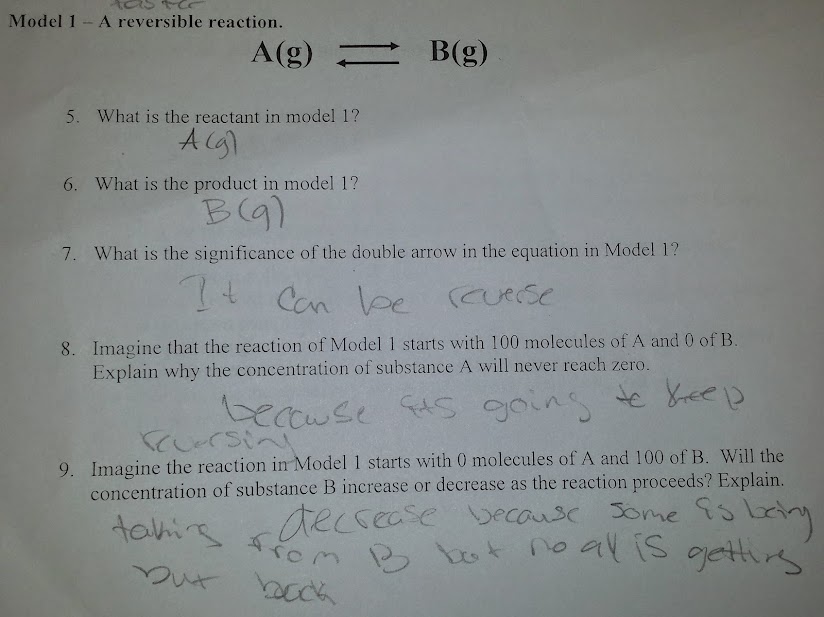 As students finish the activities, or we approach the end of the period, I ask students to dump their water, and return the graduated cylinders and straws to the box at the front of the room.

As the activity took longer than anticipated, my planned exit ticket becomes tomorrow's bellringer.  I collect student papers before they leave so I can assess who is ready to move on and which students need a little more guidance before progressing the next day.  I put an asterisk on the names of students who need more assistance, so I can talk to them the next day.