Students will be able to recreate the phases of the Moon using a sphere on a stick.

Lunar Phases are a difficult subject for students to grasp. Ease their trouble by having them recreate the phases of the Moon with Lunar Lollipops.
Lesson Author

MS-ESS1-1 Earth's Place in the Universe

PE: MS-ESS1-3 Analyze and Interpret data to determine scale properties of objects in the Solar System.

DCI: ESS1.B Earth and the Solar System - The Solar System consists of the Sun and a collection of objects including planets, their moons, and asteroids that are held in orbit around the Sun by its gravitational pull on them.

SEP: (2) Developing and Using Models - Develop a model to describe unobservable mechanisms. Using a lunar lollipop students will be able to see the mechanism that causes lunar phases. Students will have the opportunity to create the phases of the Moon in a concrete manner, directly manipulating the night side of the lunar surface.

CCC: (1) Patterns - The phases of the Moon are observed in a pattern that lasts about a month. These phases occur in a predictable pattern that has been observed for thousands of years. These observed pattern do not correctly describe the phenomenon and it required observers with great intelligence and courage to accurately describe what is actually occurring. These pattens can be directly manipulated by the students.

This lesson is designed to provide concrete evidence of why the lunar surface passes through phases. By allowing students the opportunity to experiment with the position of the lunar lollipop they are able to create their own explanations of the lunar phases. It is the teacher's job to make sure their explanation is the correct one. A goal of this lesson is to allow your students the chance to struggle with what they are observing. Incorrect misconceptions about lunar phases are cemented at a young age and new information, that may be contradictory, is often molded into the old misconception. In order to overcome this old misconception students must be allowed to see for themselves the phenomenon of lunar phases and so challenge their old beliefs.

The first thing that needs to be set-up is a simulation of a star called the Sun. The Sun is a light bulb that I hang from the center of my classroom. I've hooked it up to a remote switch so I can turn it on and off with the classroom light switch. I've also covered all the windows and taped over every little light bulb I could find.

This "solar" light bulb hangs about 2 feet below the ceiling so as to allow the correct placement of the lunar lollipops to create accurate simulations of lunar phases. 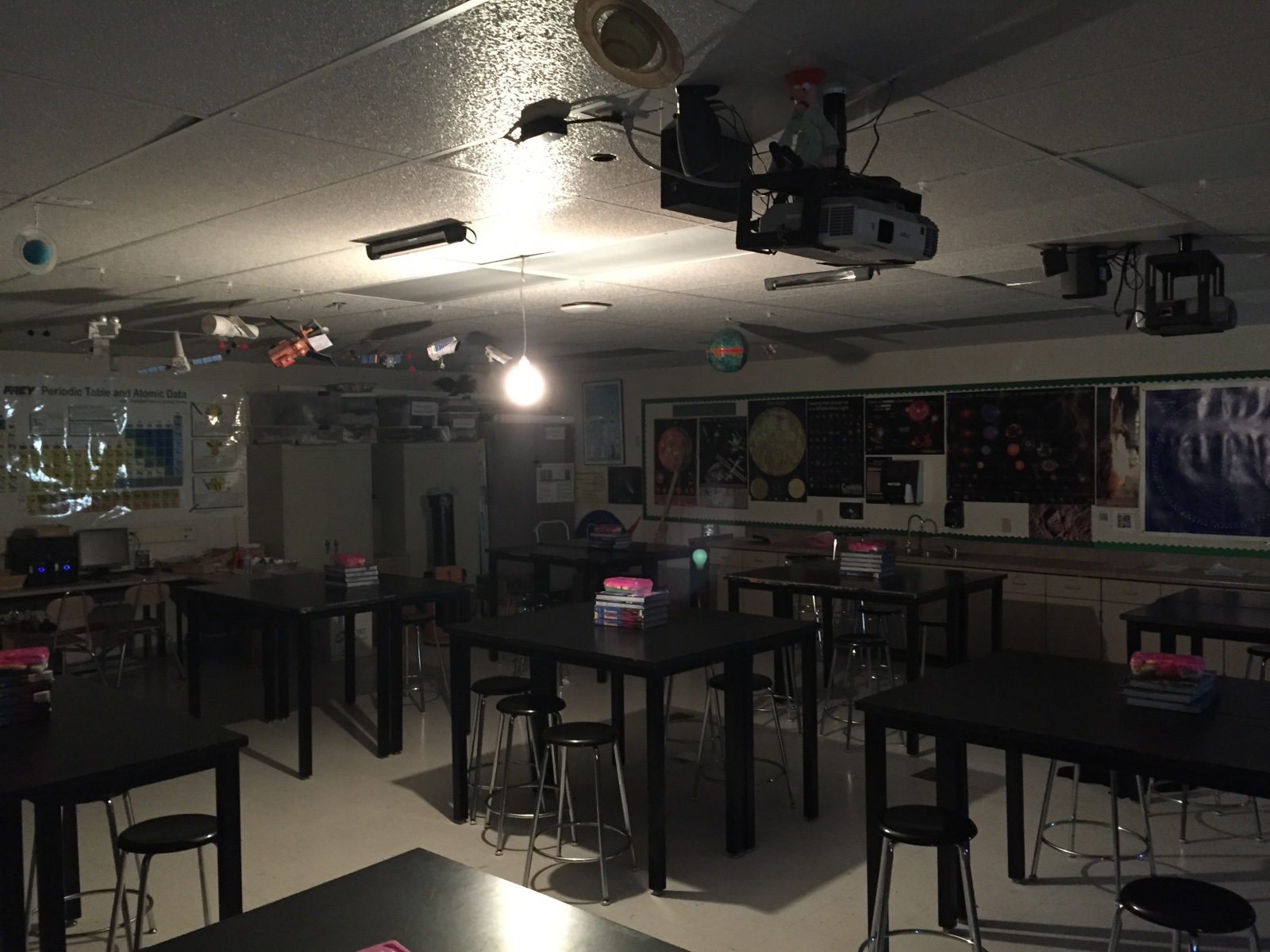 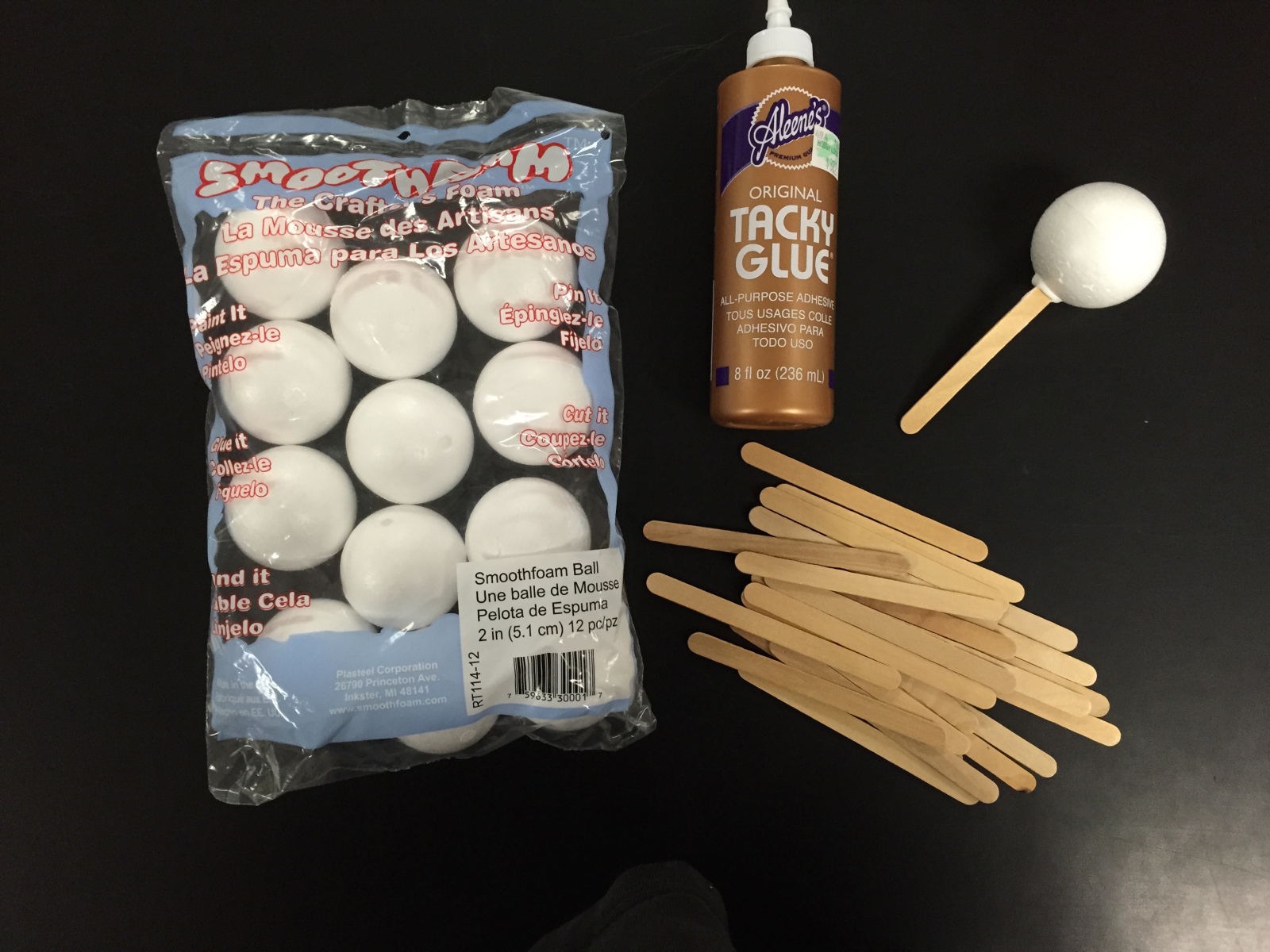 A close-up view of the styrofoam balls reveal a small dimple from when the styrofoam was injected into the mold. I use that as the insertion point for the craft stick. 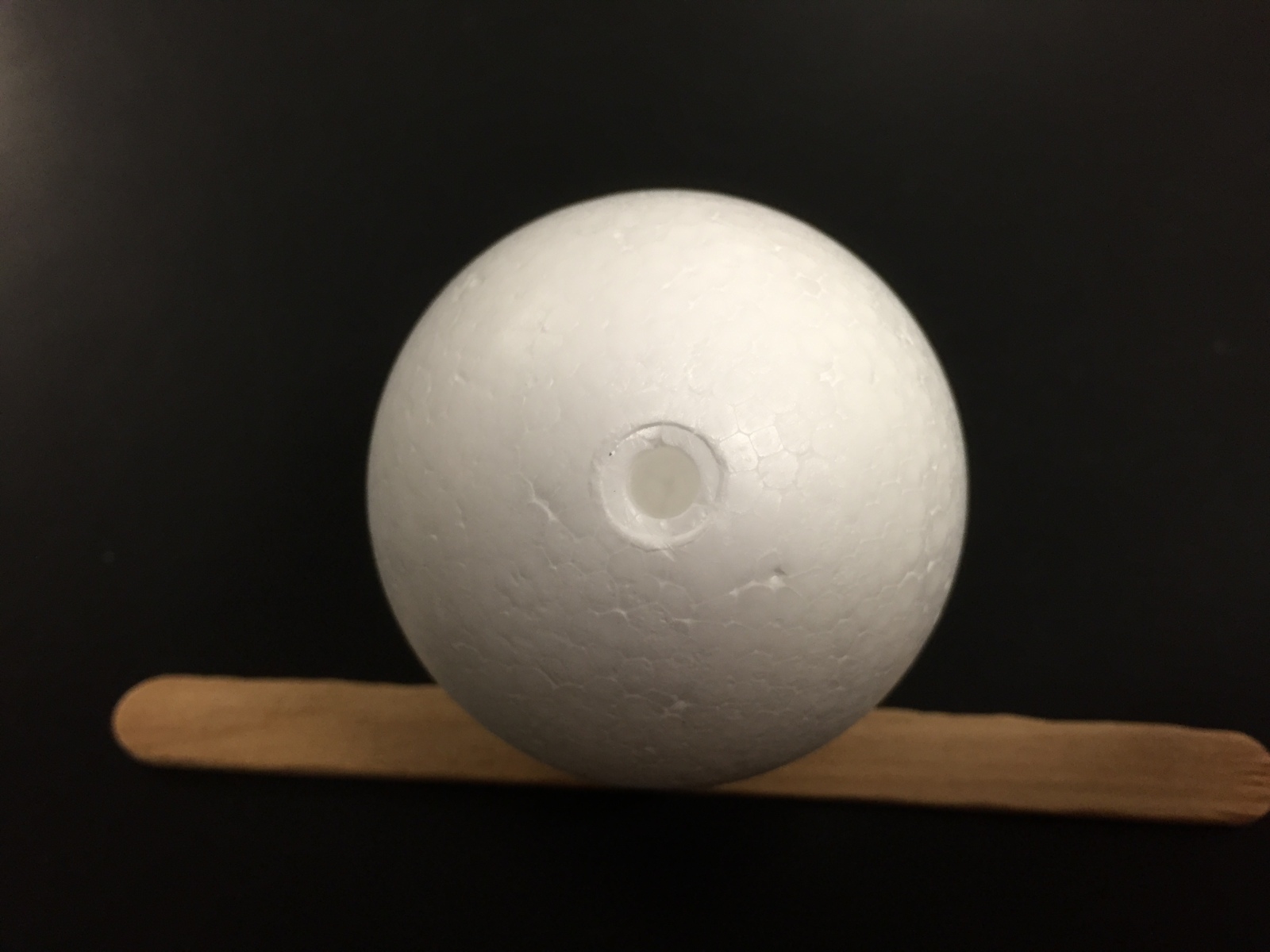 Dip the craft stick into the tacky glue before you insert into the styrofoam ball. 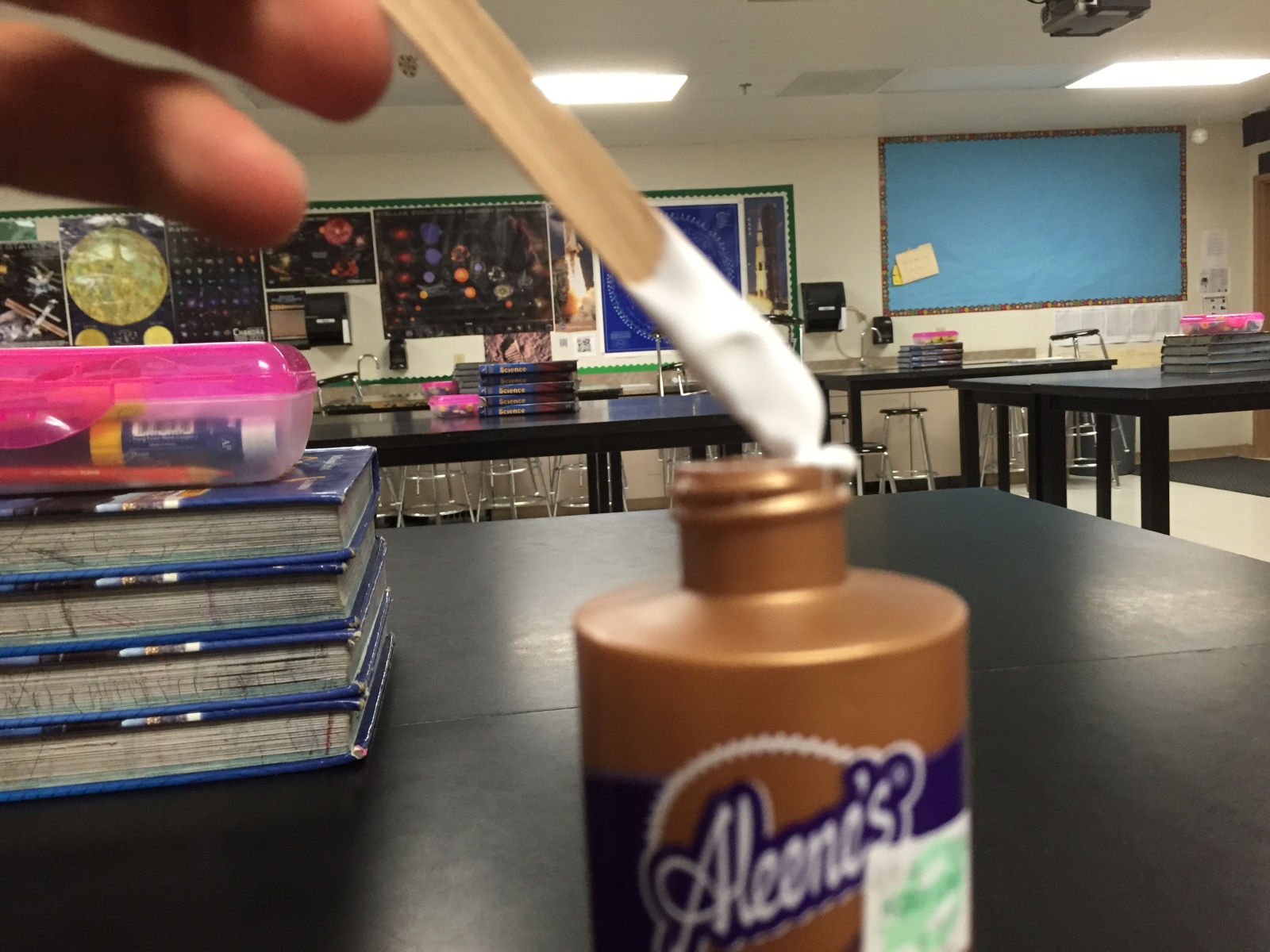 With a bit of force push the craft stick into the styrofoam ball. When the tacky glue dries it will create a permanent hold. 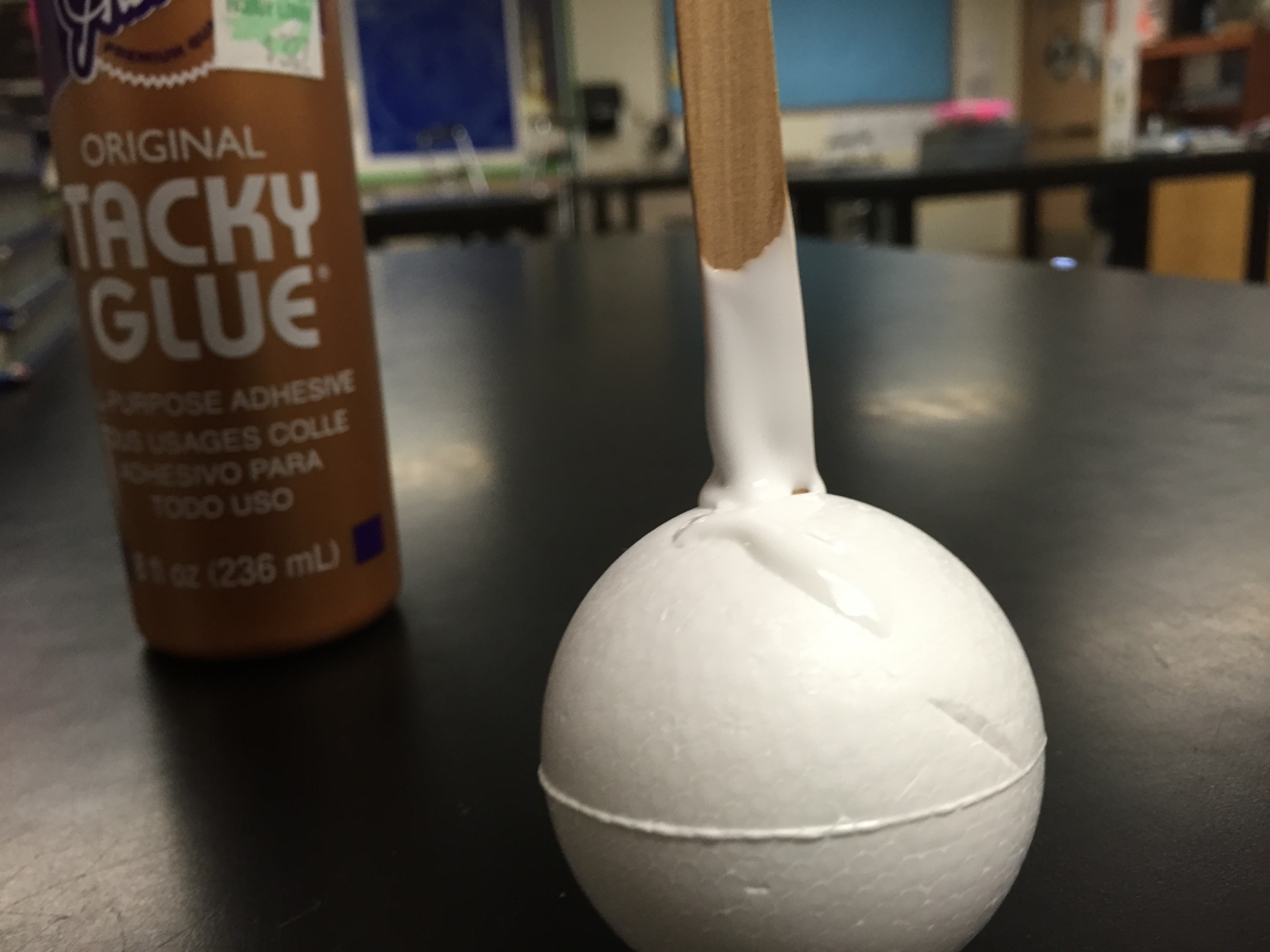 I number each lunar lollipop on the craft stick with a permanent marker. When it comes time to perform the Lunar Lollipop Lab I hand out each lunar lollipop. I issue it to the group, and am clear that I am expecting it to return the same way as it was passed out. I discuss that the group's designated lunar lollipop should not have any writing or holes on it when they turn in their assigned lunar lollipop. If you need to take this a bit further (who really trusts eighth graders) you could have a numbered sheet of paper and have each group sign-up for their lunar lollipop. This creates accountability for the equipment.

I made about twenty-six lunar lollipops so students could work individually or in pairs. With this lab I feel that individual work is more valuable then group work. An individual is forced to understand the lunar phases whereas a group could rely on a single smart individual student to do all the work. 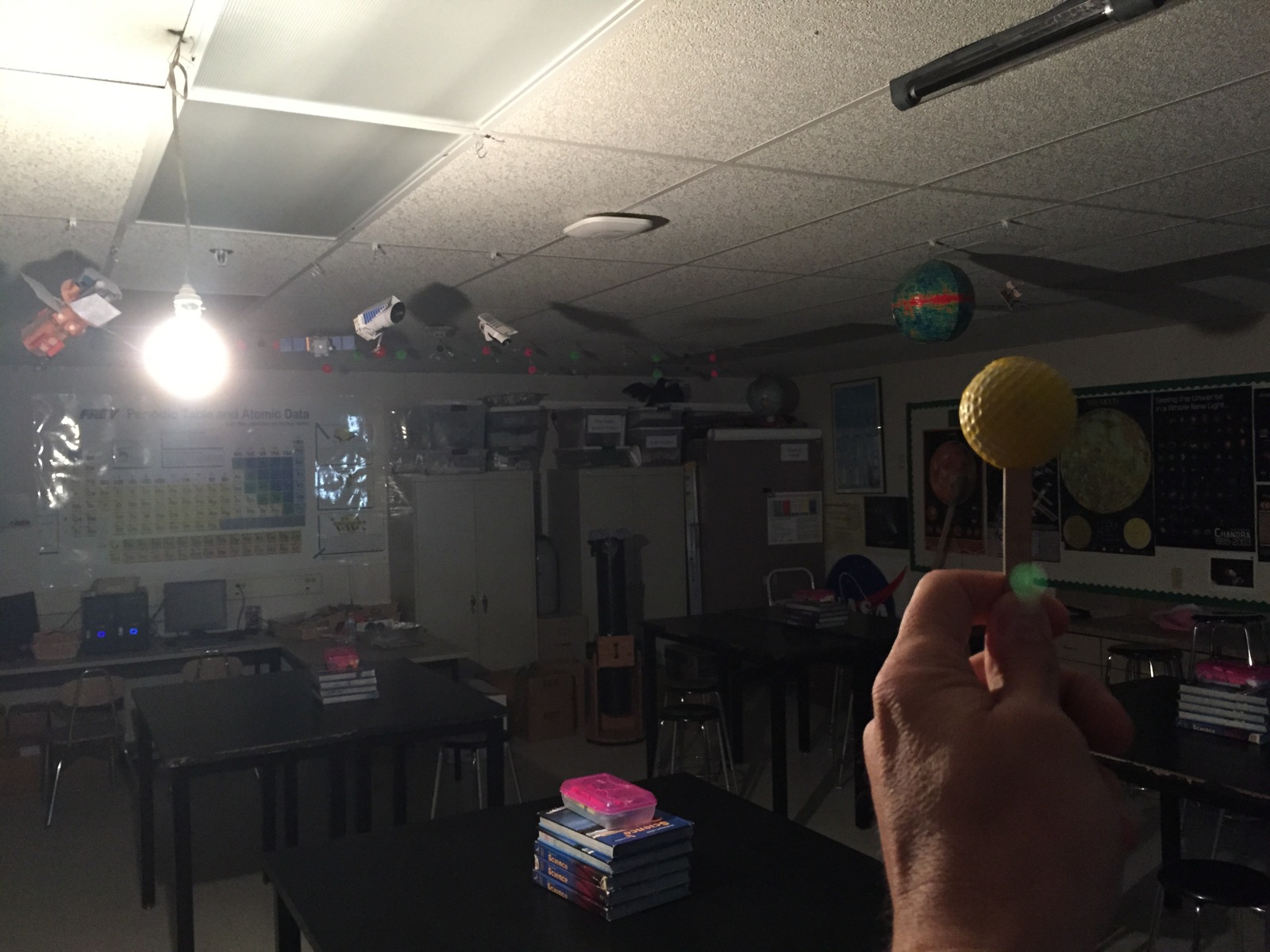 I don't teach these positions using the clock (too confusing for eighth graders). I simply demonstrate where the lunar lollipops should stop. 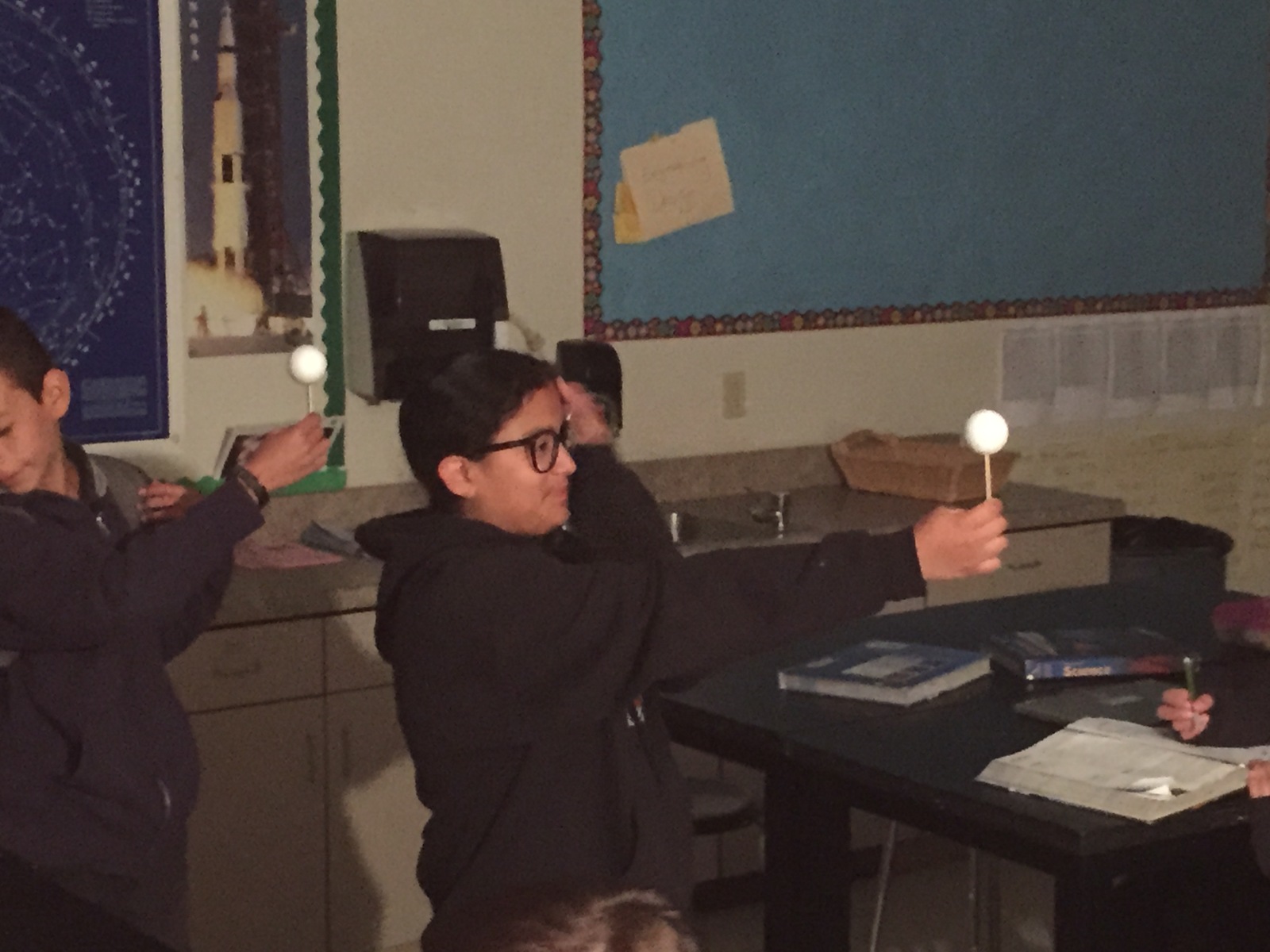 This student is demonstrating a Waxing First-quarter Moon. We discuss that the term "quarter" refers to the position of the Moon in its cycle (1/4 of the way around the Moon's cycle) and not the amount of darkness seen on the Moon. I tell the kids that if I ruled the world I would rename this phase Half-moon. 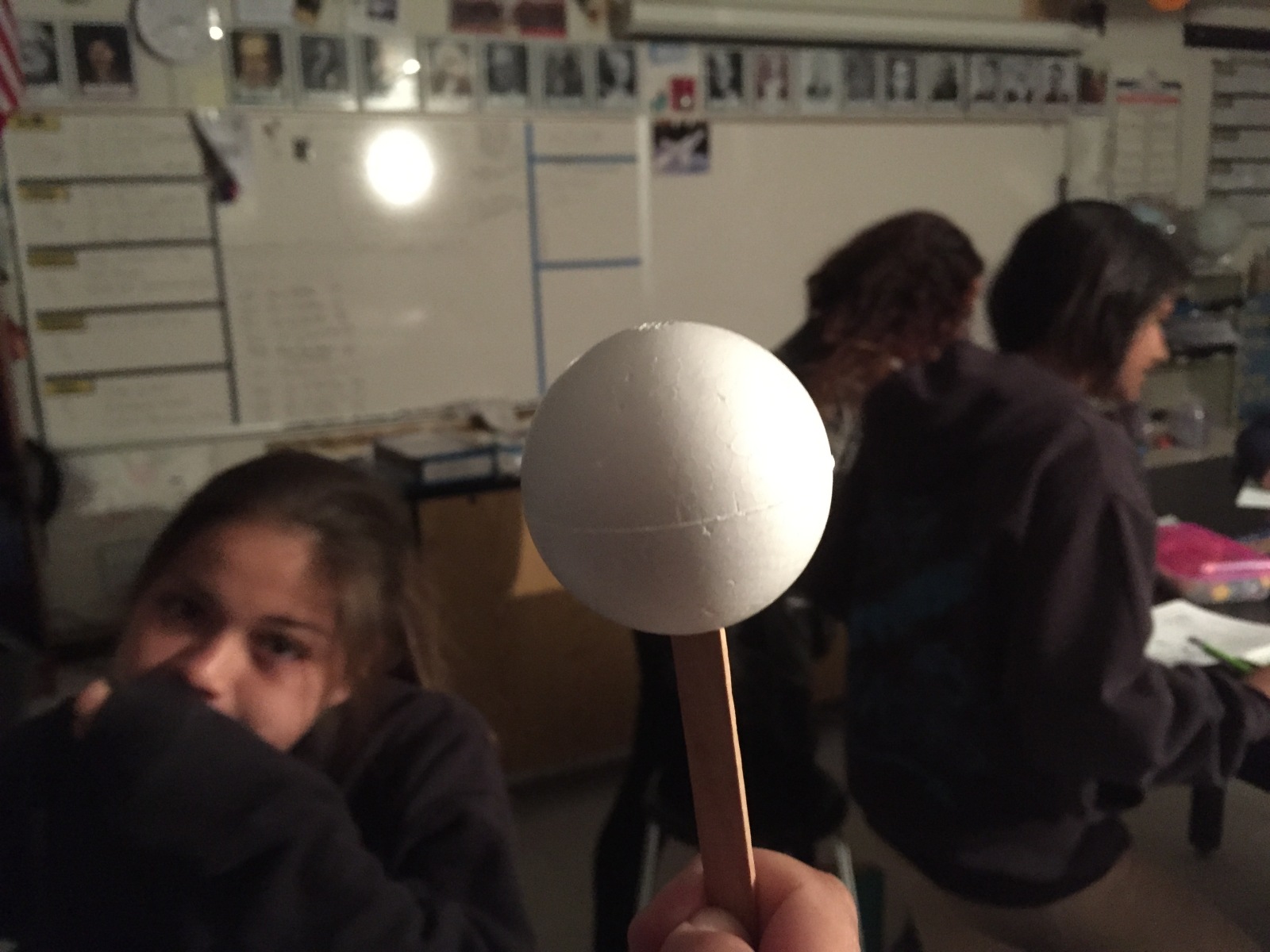 The students shade in what they see on the surface of their lunar lollipop (this is the side that "faces" their head - Earth). I tell the story that there are little people living on the end of their nose and they are to draw what these little people see when they look up and gaze at the lunar lollipop. Along with the correct shading the students must also correctly identify each lunar phase.

As part of the review questions, the students must create a simulated solar eclipse (place the New Moon directly over the simulated Sun (light bulb) and draw the geometry of a solar eclipse. The same must be done for a lunar eclipse, but at the Full Moon phase. 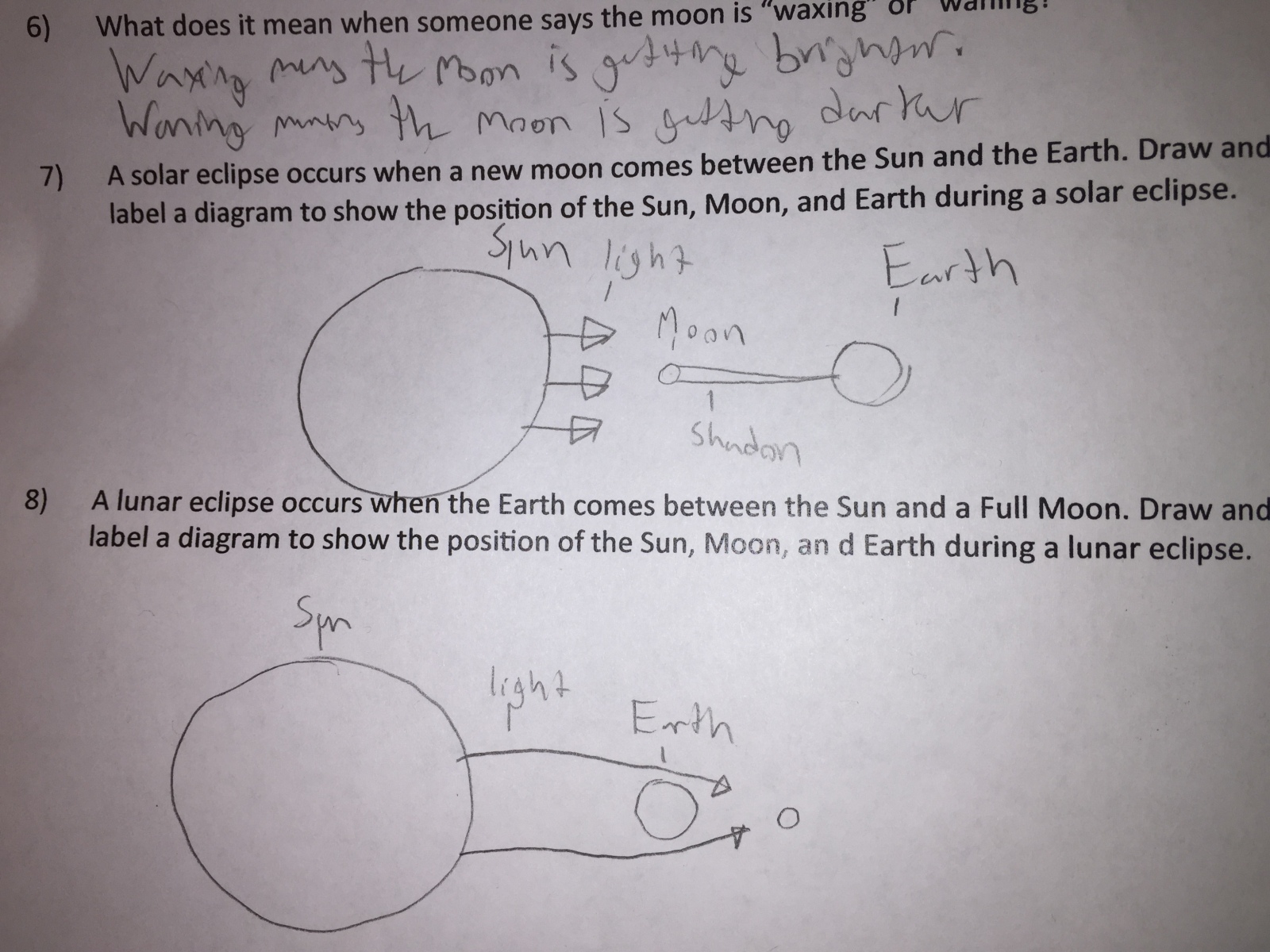 We discuss before hand that a solar and lunar eclipse do not occur every month due to the 5 degree tilt in the Moon's orbit and the its slightly elliptical orbital path around the Earth. Solar eclipses are more common (occurring a little more than once a year) but due to the small size of the Moon's shadow only specific places on Earth can view it and it only lasts a few minutes. Whereas a lunar eclipse, which is slightly more rare of an event, is seen by almost everyone on the night side of the Earth (potentially 1/2 the population of the Earth) for many hours.

Inner Planets
8th Grade Science » Where Is Earth In Space?