Students determine that satellites in a certain orbit are geostationary based on observations and what they know about orbital periods.

There is one radius where a satellite's orbital period matches the rotation rate of the body and, if it is over the equator, it is a geostationary orbit.
Lesson Author

Jameson Parker
Danbury, CT
Grade Level
Subjects
Orbiting Bodies
Science
gravity (Physics)
Physical Science
orbital motion
Standards
MP7
Look for and make use of structure.
HS-PS2-4
Use mathematical representations of Newton's Law of Gravitation and Coulomb's Law to describe and predict the gravitational and electrostatic forces between objects.
HS-ESS1-4
Use mathematical or computational representations to predict the motion of orbiting objects in the solar system.
SP1
Asking questions (for science) and defining problems (for engineering)
SP7
Engaging in argument from evidence

On day one of Going Full Circle, students learned how to derive the equations for a satellite going in a circular orbit. They applied those equations to determine the period of a near-earth orbit satellite such as one that takes pictures of the Earth's surface. For this lesson, students explore the mathematical relationship between orbital radius and the period of a satellite by graphing the period of the planets orbiting the sun versus their distance from the sun.

Then students make observations about the ring of satellites that orbit the Earth at one particular altitude. They are expected to explain why this ring exists using the orbital motion equations. CCSS Math Practice 7: where students look for and make use of structure is used for this activity. NGSS Science Practice 1: Asking questions, and Science Practice 7 Engaging in argument from evidence is also a part of this exercise as students make observations about how the satellites move and hypothesize the reasons that could explain why so many satellites are at one particular orbital radius. Also applicable are NGSS performance standards HS-ESS1-4, where students use computational representations to predict the motion of orbiting objects and HS-PS2-4, where students use mathematical representations of Newton’s Law of Gravitation in order to calculate the orbital period of a satellite in geostationary orbit.

I hand out the orbital graphing worksheet to the students and explain that they are to to plot out orbital period versus orbital radius. They use actual data from the planets in our solar system. Every student gets their own sheet and they are to work on this independently. The goal is for students to "see" the mathematical relationship between the two quantities and conclude that for any one radius, there is exactly one period. Students create the graph and then answer questions about the relationship. They also have to determine what they believe the orbital period of Pluto is based on their graph.

Hypothesis on the Satellite Ring around Earth 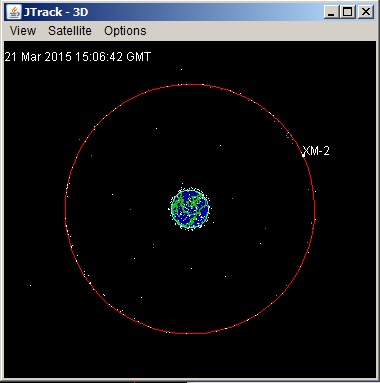 For this activity, I use a simulation program provided by NASA.gov called J-Track. It shows real-time data on the orbit of several hundred satellites going around the Earth. This is a brief tutorial of how I use the J-Track java program. One way to make the satellites more visible to all students is to zoom in on the simulation using the zoom feature on my projector. I figured out that no matter how much I zoom in the Java program, it always represents the satellites with a tiny dot, which can be hard to see.

The previous section, students concluded that for any one radius, there is one period. Students apply that knowledge to explain why there is a ring of satellites around the Earth (pictured).  At minute 2:10 of the tutorial video, you can see how I show the ring of satellites to the students. Most satellites are in a low-earth orbit. These satellites in the ring are much farther away which means that is cost a lot more to put them in this orbit. Why are they there?

The answer is these satellites are all in a geostationary orbit (the period of the satellite is 24 hours and they are over the equator). However, I want students to figure this out without me telling them. To scaffold their own understand and apply well founded reasons for their hypothesis, I have students write down

Observations about the ring include:

Things the know about circular orbits include:

After the students have figured out the reason for the geostationary we talk about why someone would want to put a satellite in this particular orbit. Students are clever and able to figure out many of the different applications and types of satellites, including satellite TV, satellite radio, GPS, weather tracking (a cloud cover image from Weather.com is from a geostationary satellite). Drive down a residential street and there is plenty of evidence of this satellite ring on houses! Satellite TV dishes all point toward the South, pointing at the geostationary satellites which orbits over the equator.

To close the period, I pretend that the NASA director calls me on my phone again. This time, the director wants the student-scientist to determine the appropriate altitude for a satellite so that it is in geostationary orbit. I project the mission details on the board using the Mission Control Needs You-again power point.

Students have 12 minutes to complete this assignment independently. This is to demonstrate their understanding of the dependence of orbital period based on the radius and their ability to calculate the correct altitude. After 12 minutes, I collect the students work and then go through the solution which is on the power point. I have a slide that shows the orbital period equation solved for the radius. Then I display the answer, which is 42,000 km.