Students will examine radioactivity more closely and expand their understanding of the concept of "radiation."

The term "radiation" is complex and has many facets, including connections to the electromagnetic spectrum and nuclear decay.
Lesson Author

Timothy Brennan
Woodstock, VT
Grade Level
Ninth grade
Tenth grade
Eleventh grade
Twelfth grade
Subjects
Science
electromagnetic field
Physical Science
electromagnetic induction
electromagnetism
Waves
electromagnetic spectrum
wave-particle duality
Standards
HS-PS1-8
Develop models to illustrate the changes in the composition of the nucleus of the atom and the energy released during the processes of fission, fusion, and radioactive decay.
HS-PS2-5
Plan and conduct an investigation to provide evidence that an electric current can produce a magnetic field and that a changing magnetic field can produce an electric current.
HS-PS4-3
Evaluate the claims, evidence, and reasoning behind the idea that electromagnetic radiation can be described either by a wave model or a particle model, and that for some situations one model is more useful than the other.
SP3
Planning and carrying out investigations
SP4
Analyzing and interpreting data
SP5
Using mathematics and computational thinking
SP6
Constructing explanations (for science) and designing solutions (for engineering)

Recently, I've introduced several different assignments to my students. In addition, I've been a little reluctant to put precise due dates for them as I've wanted some time for in-class work to develop. I don't like being vague and students don't like it either though, in this case, they've been willing to trust me in terms of, eventually, being clear and fair. Today I spend the first few minutes of class sharing expectations and due dates with students for three upcoming assignments.

After clarifying these expectation with students, I remind them that today is the last day to collect any evidence for their Four Big Ideas investigation. I dedicate a good portion of class for this work. Those who have finished collecting data may work on the other two assignments. Students may engage in any one of the following activities:

- create graphs based on that data

- begin writing up the report of findings from the investigation

One upside to multiple assignments is that class time can be differentiated according to need quite easily. Whichever choice is made, students address one or more of the essential NGSS Performance Expectations (HS-PS1-8, HS-PS4-1, HS-PS4-3, HS-PS2-5) related to electromagnetics.

I provide a block of time for students to make personalized choices about their work. I tell students that, while a good portion of the remaining class time can be used this way, the final 25 minutes are reserved for some new thoughts about radioactvity. In this way I can serve the differentiated needs of my students while still maintaining some momentum with new content.

Most students use this time to return to lab work. At this point in the investigation, all teams have moved through three stations and some have completed all four stations. I work with students to get materials distributed and to address any lingering issues with equipment. In this image, students are settling in to their work at a variety of stations. 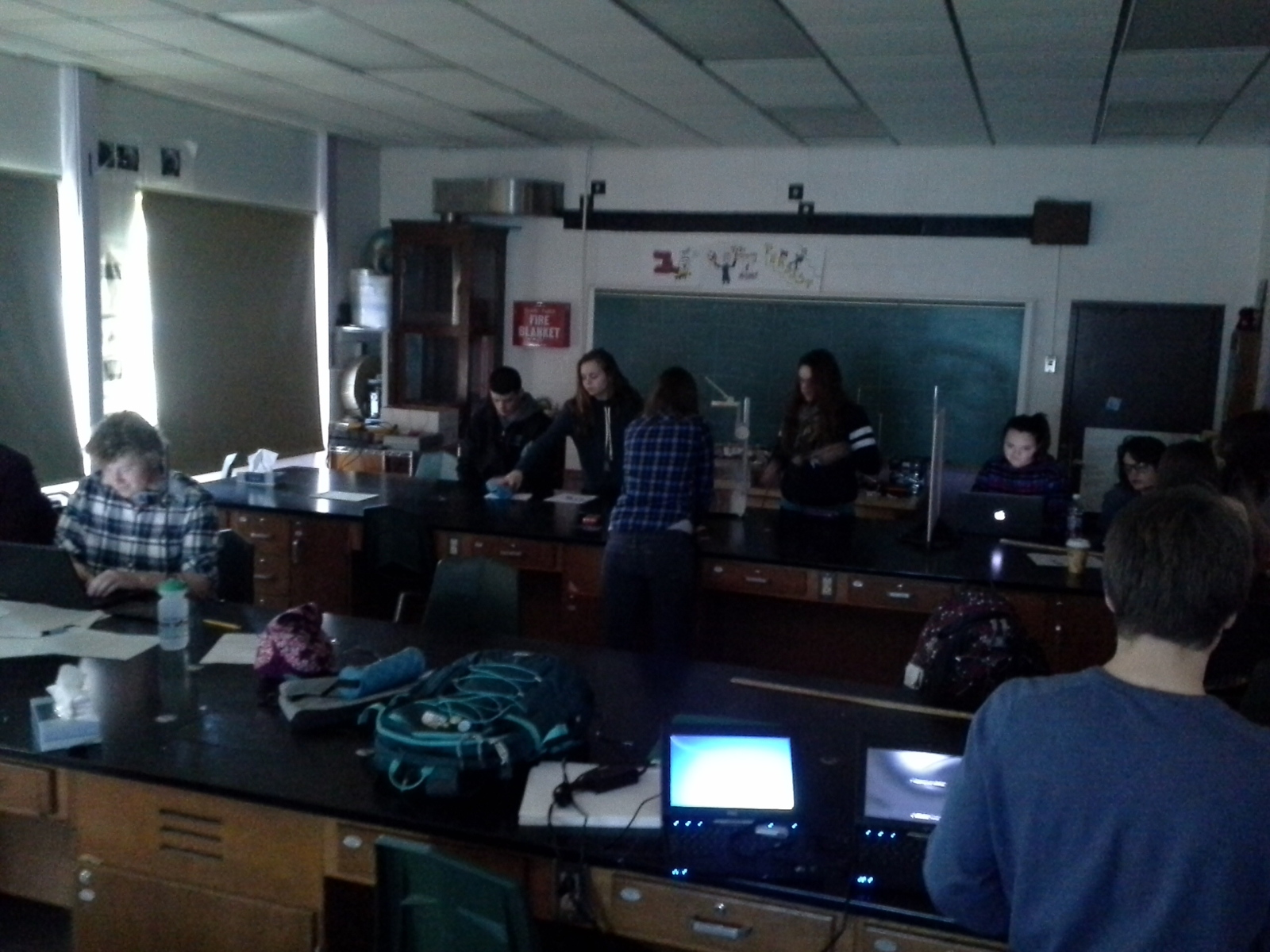 In this image, students have implemented the double slit experiment, looking for the interference pattern that will indicate the wave-like behavior of light. The laser is mounted on a small tripod while the double slit barrier is taped to jack that can be adjusted very finely to bring the holes to just the right spot - note the reflected leaser light on the student on the left. 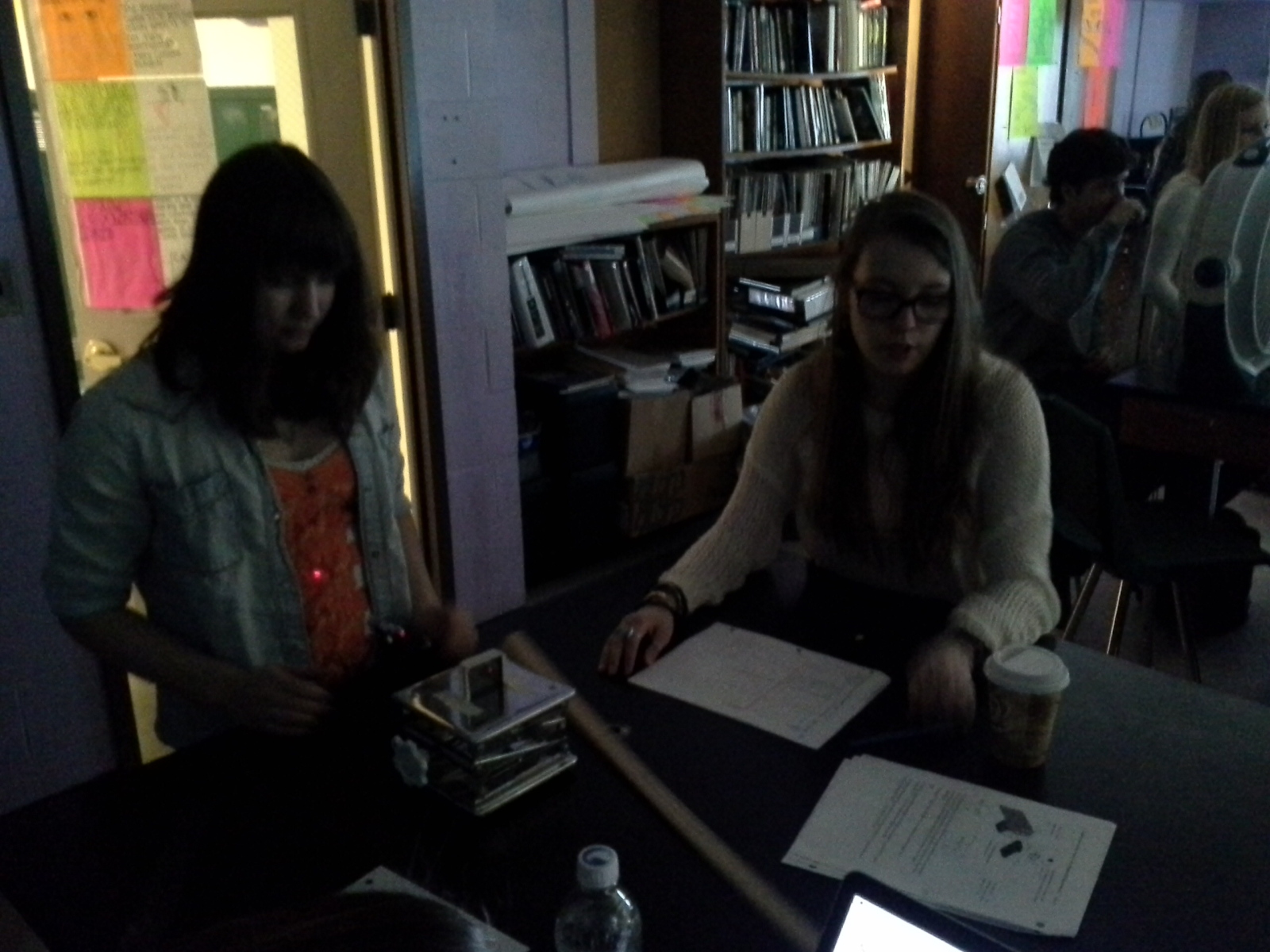 We continue in this mode until there are about 25 minutes left in class. I ask students to clean up quickly and return to the front of class to participate in a discussion of some new thoughts related to radioactivity.

In the final segment of class, I wish to extend student thinking about radioactive decay. Specifically, I want to look at the generation of energy beyond the kinetic energy of the particles in a decay event. To do so, I ask students to follow along as I take a close look at alpha decay.

I reveal one line at at time using the shade feature on my Smartboard. I begin with the basic equation of the decay of Plutonium into Uranium and Helium. As a formative assessment, I ask students to raise their hands if they can immediately identify which of the three types of decay this equation represents. Nearly every hand goes up and students correctly identify this as an alpha decay event. The "close look" begins when we move from looking at the conservation of protons and neutrons to a consideration of the masses involved. I show students the careful measures of the masses on both sides and we quickly realize that some mass goes missing. I delay talking about the mechanism (differences in binding energy mass) and introduce Einstein's mass-energy equivalence relationship.

That missing mass has been converted into energy. I show how to convert the mass from atomic mass units to kilograms, then use Einstein's equation to calculate how much energy is produced. We immediately use Planck's relationship (E = h * f) to establish that this energy comes from the gamma-ray part of the electromagnetic spectrum. In addition to a nearly harmless alpha particle, blocked effectively by clothing, alpha decays also generate a potentially harmful gamma-ray.

I end class with a quick example of the reverse effect - mass being generated from energy. I generate a cartoon version of protons colliding (admitting to students that the explanation contains a little white lie - I decide, in the interest of time, not to delve into the truth of protons and anti-protons colliding, preferring not to be derailed by questions about anti-particles). In this example, the incredibly high kinetic energy of the protons can be converted, again by Einstein's mass-energy relationship, into a pair of masses many times more massive than the colliding protons. In an extreme case, these collisions can generate a pair of "top" quarks, particles whose mass is some 170x the mass of the incoming protons!

This discussion brings class to an end. Though the study of quarks and Einstein's equation are not specifically addressed in the NGSS Performance Expectations, they are ideas that many students have heard about; providing some time to explore these exotic ideas helps to flesh out the standards and feed student interest.