Survival of the Fittest (2 Days)

SWBAT explain what is meant by “survival of the fittest”, and create a cartoon that depicts their understanding.

Fitness does not mean stronger or faster.
Lesson Author

I start this lesson by showing the students my We Are the Survivors video that shows several animals and how their adaptations have allowed them to survive in their environment.

I then write the title of todays lesson "Survival of the Fittest" on the board, and ask the students what they think it means. This introduction is done using the Think-Pair-Share strategy, however before the students can turn to talk with their partners, I also say, "Before you share your ideas, I want you to know that mosquitoes have been around for 79 million years - before the extinction of dinosaurs - and have been found everywhere except Antarctica."

I give students a couple of minutes to add this information to their thoughts and then have them share their thoughts with a partner. After they have an opportunity to discuss with a partner, I use popsicle sticks to initiate the discussion. The goal is to have students begin to understand that survival of the fittest is the continued existence of organisms that are best adapted to their environment.

30 minutes
Read it once, read it again

I tell the students that today they will be reading a comic strip, and direct them to the "Survival of the Sneakiest" sheet where they can find the link to the complete comic strip.

I tell the students to first familiarize themselves with the comic strip by reading it once. Then, they should read it again as they answer the questions, providing the number(s) of the frame(s) that help support their answers. Once they are satisfied with their answers, they can (and should) share their work with the person sitting next to them, while discussing how the evidence they provided supports their answers (SP7).

In the student work (SW1, SW2, SW3) you may notice that although the answers are quite similar, the evidence/frames they cite are quite different. This is perfectly valid since their interpretation of the comic strip is what actually helps them answer the questions. In the following video the students explain their understanding of survival of the fittest; Did you catch the girl towards the end who is still struggling with letting go of the idea of fitness meaning strength, and how she resolves it?

Note to teachers: This activity sometimes takes the students a complete class period of 50 minutes, and other times it only takes half. Regardless of how long it takes your students, I suggest that you discuss with the students the second part of the assignment before they leave for the day to give them an opportunity to do some research for homework. This will allow them to be prepared to draw their own comic strips the next day.

In the second part of the lesson, I ask students to pick an animal, and to develop a comic strip that depicts how their chosen animal is an example of survival of the fittest. This cartoon does not have to be very elaborate, but it must depict how their chosen animal is fit. Students can find the rubric for the comic strip on the second page of the Survival of the Sneakiest sheet.

Sometimes students struggle with coming up with ideas. To guide the students, I tell them to pick their favorite animal (or an animal whose name starts with their first initial). Then, they can look up their animal's adaptations by simply doing an Internet search of their "chosen animal adaptations". Choosing from whatever comes up, they can move on to how that adaptation makes their animal fit for their environment, and move from there to the comic strip.

This activity fosters not only the 21st Century skill of creative thinking, but also gets students thinking about why specific adaptations developed, giving them an opportunity to evaluate information and form hypotheses (SP6).

In this Student Speak video I asked students to talk about the adaptations they chose to showcase. As you can see, they are still in the process of drafting their work and exploring the information they have available.

Here are some examples of the student's final cartoons 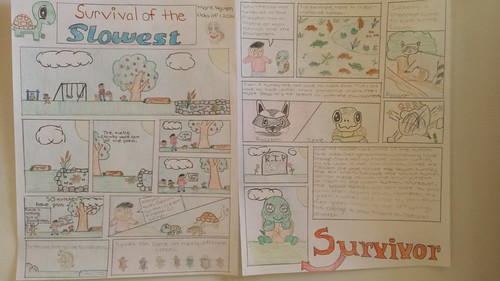 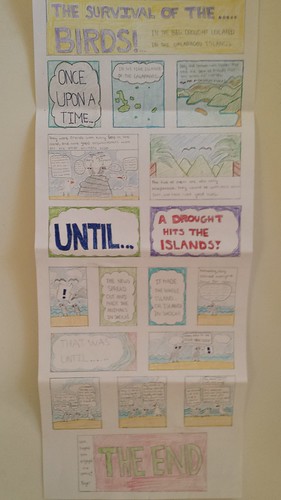 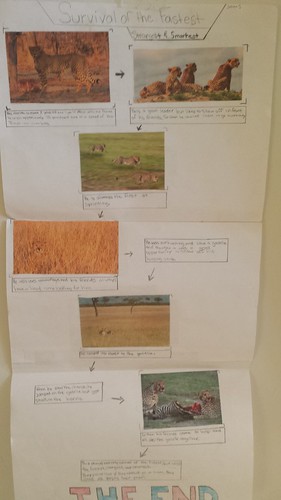 I close this lesson by having students share their comic strips with the class. This is not done as formal presentations, but rather as an impromptu sharing, where students visit each others work. However, in order to make this an official task, I assign each student the responsibility of grading another student's work using the rubric.

Unveiling the Significance of a Poet's Words: Identifying Figurative Language in "We Wear The Mask"
9th Grade ELA » Poetry Analysis