SWBAT derive equations of circles, perpendicular bisectors, and parabolas given their locus definitions

Which came first, the algebra or the geometry? After this lesson, students will interplay between these two branches of mathematics.
Lesson Author

Anthony Carruthers
Pasadena, CA
Grade Level
Ninth grade
Tenth grade
Subjects
Math
Geometry
coordinate systems (Geom Modeling)
Standards
HSG-GPE.A.1
Derive the equation of a circle of given center and radius using the Pythagorean Theorem; complete the square to find the center and radius of a circle given by an equation.
HSG-GPE.A.2
Derive the equation of a parabola given a focus and directrix.

10 minutes
An idea for enhancing this lesson with kinesthetics

I ensure that we eventually get to the fact that there are infinitely many locations (i.e., points) that satisfy the condition and that they all are collinear.

To close up this section, I explain the learning goal for the lesson: "Students, today we will be learning the locus definitions of some familiar geometric figures, and we will be using these definitions to derive the equations for these figures."

Note: See reflection for an idea I had for enhancing this section of the lesson with more kinesthetics.

I give my students the following definitions to record in their notes:

Perpendicular Bisector: The set of points in a plane that are equidistant from the endpoints of a segment that is also in the plane.

(Depending on the level of the class, I might ask a higher order thinking question like, "Why is it necessary for us to specify that the points and the segment are in the same plane?")

Circle: The set of points in a plane that are equidistant  from a point called the the center. (The common distance is called the radius.)

(I will ask students why it is necessary for us to specify "in a plane". I'll give them some time to think privately, then share with their partner, and finally I'll call on students until we get the idea that without the "in a plane" designation, we'd be talking about another locus...a sphere.

At this point I tell my students that they should be pretty familiar with these two definitions based on prior knowledge and work we've done in the class. I warn them that this next definition may not be so familiar so that they tune in and really pay attention. I might say something like, "Students, so far you've dealt with parabolas in Algebra and you've explored their algebraic properties. You've probably never had the opportunity to consider the geometric definition of a parabola. Well, your time has finally come!"

Parabola: The set of points in a plane that are equidistant from a point called the focus and a line called the directrix.

I don't expect this definition to make much sense to students so I stop here for an illustrative demonstration. I will either use a still image like the one below, or I will give a more dynamic demonstration using Sketchpad. 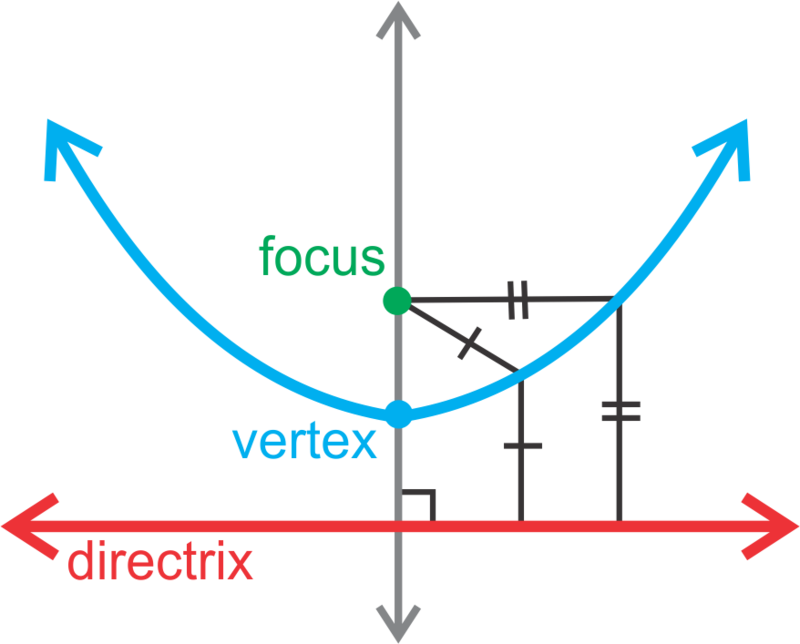 The main points I want to hit are:

Although the sketchpad demo is certainly cooler than using a still image, I tend to go with the still image at this point in the lesson in order to save the "wow factor" of Sketchpad for later in the lesson when we verify that we have derived the correct equation for a parabola with specified focus and directrix.

Now that students have the definitions, I give them five minutes or so to practice reciting the definitions with their A-B partners. There is no pressure for them to memorize all of the definitions at this point; I just want them to start moving in that direction.

25 minutes
Establishing the idea of form

Once we've done that, it's time to work on the problems beginning  with #4. I ask students to read the problem and decide which of the three figures is being described, and what information in the problem indicates that it is this type of figure. I have students discuss this with their partners and, once they agree, sketch the diagram (my students bring compasses to class every day, so I allow them to use them for their sketches). Next, I confirm that the figure is indeed a circle with center (-2,5) and radius 6.

A big idea, enduring understanding, etc., of this lesson is that of the arbitrary point P with coordinates (x,y). I want my students to understand that there are infinitely many points on the circle whose equation we will be writing. Moreover, I want them to understand that the arbitrary point P (and I use this language repeatedly) represents ALL of those points. I have them select any point on the circle (preferably one that doesn't have obvious coordinates) and label it P (x,y).

Then I write the simplest definition of the circle so far: OP = 6.

I make sure that students understand what this is actually saying. I want them to understand that it means that the distance from O to any point P on the circle is 6.

Next I show how to use the distance formula to express OP.

Eventually we get to (x+2)^2+(y-5)^2 = 36. I explain to students that this is the standard form of a circle, (x-h)^2 + (y-k)^2 = r^2, where (h,k) is the center and r is the radius. I am careful to clarify at this point that students will still need to be able to derive the equation using the locus definition even though knowing standard form allows us to predict what the equation will be.

Using distance formula, this becomes a huge mess of radicals and squared binomials. In the midst of all of this, I remind students that the perpendicular bisector is a line and we are deriving its equation. So, I tell them, despite all of these squares and radicals, in the end this is going to be the equation of a line, which we know we can write in slope-intercept form, y = mx + b. That is our goal. To isolate y so that we'll have an equation of the form y=mx+b.

So as we square the binomials (a skill that we have been working all year to automate) and watch the squared terms disappear from the equation, and separate the y's from the x's and constants, we eventually get to y = -5/2 x + 11

And finally I model deriving the equation of a parabola. Take a look at the following video to get an idea of what elements are included in that modeling

Once we've derived the equation, I want students to see with their own eyes, and believe, that the algebra magic we've done has actually been successful. Toward that end, I use Geometer's Sketchpad to verify that the equation we found is correct. To see what students see, check out this video.

When I make a choice to model skills and concepts thoroughly and directly as I have in this lesson, it's usually because the lesson involves concepts and skills that are not intuitive and require expert knowledge. My goal in these situations is to model so thoroughly that students will feel completely prepared and confident before they begin working on their own.

In this section of the lesson, students will be working on Locus Definitions and Equations_Independent. I have finished modeling and students have worked examples they can use if they find themselves stuck. They are also able to collaborate with their classmates. Of course, I will also be walking around coaching students as needed.

When the students have finished working, I instruct them to work take turns with their A-B partners explaining their work for problems 4, 5, and 6.

Finally, I'll call random non-volunteers to present their work under the document camera.