Students will be able to determine the relationship between net force, acceleration and mass and use it to create the Newton's Second Law equation.

Anna Meyer
Park Ridge, IL
Grade Level
Tenth grade
Subjects
Science
acceleration (Physics)
Physical Science
Newton's Second Law
Standards
SL.9-10.1
Initiate and participate effectively in a range of collaborative discussions (one-on-one, in groups, and teacher-led) with diverse partners on grades 9-10 topics, texts, and issues, building on others' ideas and expressing their own clearly and persuasively.
RST.9-10.3
Follow precisely a complex multistep procedure when carrying out experiments, taking measurements, or performing technical tasks, attending to special cases or exceptions defined in the text.
RST.9-10.7
Translate quantitative or technical information expressed in words in a text into visual form (e.g., a table or chart) and translate information expressed visually or mathematically (e.g., in an equation) into words.
HS-PS2-1
Analyze data to support the claim that Newton's second law of motion describes the mathematical relationship among the net force on a macroscopic object, its mass, and its acceleration.
SP1
Asking questions (for science) and defining problems (for engineering)
SP2
Developing and using models
SP3
Planning and carrying out investigations
SP4
Analyzing and interpreting data
SP5
Using mathematics and computational thinking

The goal for this lesson is to have students use the Modified Atwood Machine to discover relationships between mass, force and acceleration. They develop that Newton's second law is an equation that related mass and acceleration inversely and acceleration and force directly from lab data which is a fulfillment of NGSS standard HS-PS2-1. Students use many skills like asking questions (SP1), determining independent and dependent variables, performing an experiment (SP3), and collecting and analyzing data (SP4). This lesson will lead to students sharing out data in a whiteboard session during the next class to develop both relationships further into a unified mathematical model of Newton's second law being a = F/m.

To start out class, I have students get in their Physics Families, since it is the beginning of the week. In today's activity, I want students to learn a little bit more about each other so I have them fill out a base group grid. A base group grid as a row for each group member and a column for each question the students are asked. I choose a few questions that are low risk and lead up to a little higher risk questions of goals for the class and the year. As you can see from the image below, the students really get to learn more about their group members and it is a nice way to get started for the week. 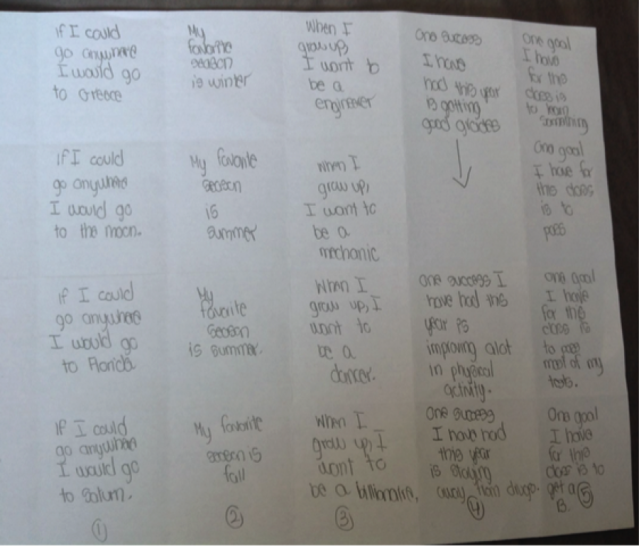 After students return to their table groups from Physics families, I tell students that we are going to do another paradigm lab to start the unit. In each unit in the AMTA Modeling Curriculum, the unit starts out with a lab that helps to define a model for the unit that is written, graphical, diagrammatical and mathematical. Each unit starts out with one of these labs to provide students with the background they need to solve problems and work through situations during the units.

I tell students that they need to make observations about the motion of a cart shown in the image below. I let go of the cart and allow it to move across the track. When the students have observed the motion, I ask them what observations they can make that are quantifiable or measurable. As a class, we come up with a list of measurable observations and the corresponding tools we would need to measure these observations. The most important variables that need to be included are mass, acceleration and force.

Once all of the measurable observations that the students come up with are listed, I start going through each observation and cross out any that appear unreasonable to students. I ask students if we have the appropriate tools to directly measure the variables they put on the board. By the end of the discussion we should be focused on three variables: mass, acceleration and force. 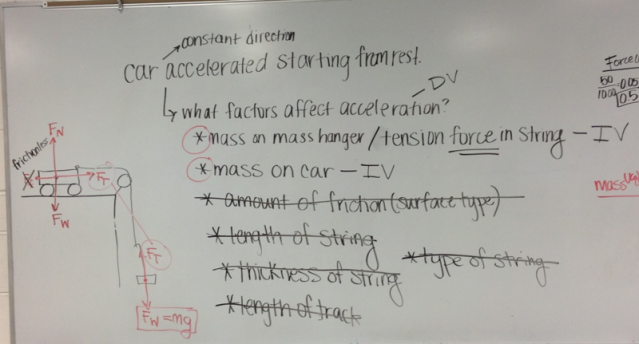 When we have decided there will be two experiments, I ask them what he controls would be for each experiment and explain how they will do each part of the lab. It is very important for this lab that students know exactly what the controls are because they can effect the experiment a lot if they happen to change. For Experiment #1 (Acceleration vs. Force), students must make sure the mass is constant so they must start with the masses in the cart and transfer them to the mass hanger so the total mass of the system stays the same. For Experiment #2 (Acceleration vs. Mass), they need to keep the force constant so they only can add mass to the cart not the hanger. 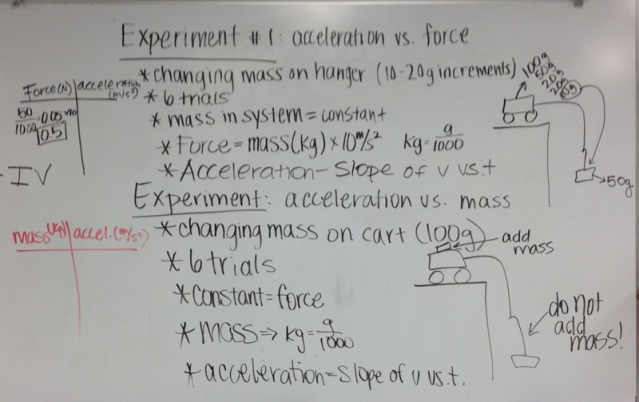 After students know what the two experiments are and how they to set them up, I ask students to move back to their lab tables to begin collecting data. Each group has 3-4 students so I ask that they select one person to be in charge of the moving the masses, one person to be in charge of making sure the cart does not come off the track at the end, and one person to be in control of the DataStudio computer program (mainly starting and stopping data collection). To make sure each group has someone in each role, I ask the masses changers to raise their hands and have someone with their hand raised explain what they will be doing. I do this for the other two roles as well to make sure that students know what they are responsible for.

Students the work on collecting data for Experiment #1, I ask them to insert their data as they move through each trial into Plotly on one student's chromebook. I remind students that the acceleration will be the slope of the velocity vs. time graph so they need to determine that before they move onto the next trial. Then I remind them to take the mass on the mass hanger, convert to kg and then multiply by 10 (acceleration due to gravity) to get the force. Each group must collect data from 6 trials.

Students then move onto Experiment #2 and collect the data using a similar process of finding the acceleration of the velocity vs. time graph and then writing down the mass in the cart (converted to kg) in their data table.