Students will be able to identify physical and chemical properties of reactants and engage in effective scientific discourse in group discussions.

Students practice discussion techniques in searching for physical and chemical properties of the reactants when eating S'mores!
Lesson Author

Leigh Roehm
Saline, MI
Grade Level
Subjects
Science
Matter and its Properties
Mixtures and Solutions
Polymer / Industrial / Environmental Chemistry
Solute
Boiling Points
Standards
RST.6-8.1
Cite specific textual evidence to support analysis of science and technical texts.
WHST.6-8.1.b
Support claim(s) with logical reasoning and relevant, accurate data and evidence that demonstrate an understanding of the topic or text, using credible sources.
MS-PS1-2
Analyze and interpret data on the properties of substances before and after the substances interact to determine if a chemical reaction has occurred.
MS-PS1-4
Develop a model that predicts and describes changes in particle motion, temperature, and state of a pure substance when thermal energy is added or removed.
SP7
Engaging in argument from evidence
SP8
Obtaining, evaluating, and communicating information
XC-P-MS-1
Macroscopic patterns are related to the nature of microscopic and atomic-level structure.

In this activity, students identify physical and chemical properties as they work on discussion techniques while making S'mores!

This lesson is designed to address the following NGSS and Common Core standards:

MS-PS1-2  Analyze and interpret data on the properties of substances before and after the substances interact to determine if a chemical reaction has occurred.

MS-PS1-4  Develop a model that predicts and describes changes in particle motion, temperature, and state of a pure substance when thermal energy is added or removed.

CCSS.ELA-LITERACY.WHST.6-8.1.B  Support claim(s) with logical reasoning and relevant, accurate data and evidence that demonstrate an understanding of the topic or text, using credible sources.

While participating in group discussions and scientific discourse, students use strategies to obtain scientific information and evidence from text (SP7).  In addition, students back up their explanations in the lab document with evidence from data and qualitative observations (SP8).

Ask students, "What are you going to learn today?"  Students should respond by saying that they will be answering the Essential Question, "How do particles combine into new substances? And, what evidence can show how the physical and chemical properties of the substances change?"  This EQ is posted on my board and on the student's Chemistry Unit Plan.

Explain that today we are going to go through a series of lab stations that will ask them to use their learning from the first three skills.  However, the focus of this lesson is to introduce them to Skill 4, "I can identify the physical and chemical properties of the reactants and products in a reaction."  (It is important to note that my students have already been introduced to physical and chemical properties before this lab.  The notes sheet along with some true/false statements relating these notes along with the answer key is included in the resources.)

As students went through a series of lab stations in the previous lesson, ask students to change their mastery score on their Chemistry Unit Plan if they feel it is necessary.  Notice in the picture below that the student has self-assessed on all skills and adjusted her mastery score (on a scale of 1 - 4, with 4 being mastery).   For a look into what students completed in the previous set of lab stations in which they were introduced to physical and chemical properties, check out this Crack That Marble! Lesson. 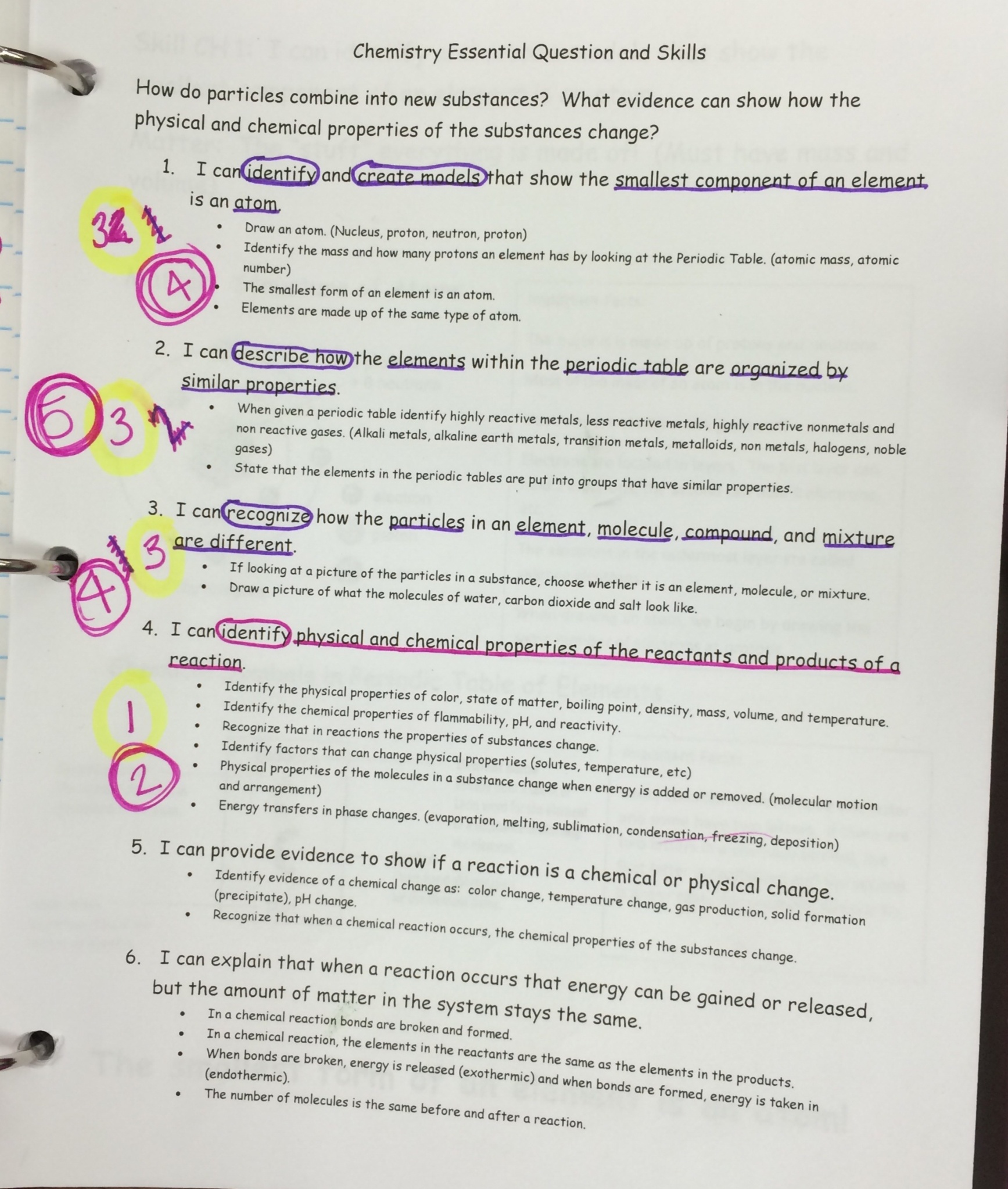 25 minutes
Build a Culture of Trust and Respect

Start With a Demonstration:

Place a balloon full of pop in a microwave and allow the students to watch as you heat it for a couple minutes (A marshmallow works too :).  Ask students to make observations and look for evidence of how adding thermal energy affects the physical properties of substances and how the particles are arranged. The balloon should expand and eventually pop!

Next, explain to the students that you are going to go through a Fishbowl Activity to discuss what was just witnessed.  Choose a group of students and sit down at a table with the class surrounding the table.

*Prior to doing this, provide the students with a slip of paper that says their role during the fishbowl.  Students may participate as they feel is correct in a group conversation; however, they must at some point exhibit the behavior that they have on their slip of paper.  Here are some examples of roles I might give:

1.  At some point in the discussion, get out your Density Reference Sheet, point to a place in the text that provides evidence, and read it to the group.

2.  At some point in the conversation, talk to someone else about something you saw on Twitter or your favorite (appropriate) app when a member of your group is talking.

3.  At some point in the discussion, ask the question, “Is there any evidence in the text that can support this?”

4.  At some point in the discussion, make a point about the molecules and physical properties but use words like “it and they” repeatedly instead of using science vocabulary.

5.  At some point in the discussion, say to another group member that just offered an idea. “That was a horrible idea.  I think you’re wrong.”

6.  Don't say anything at all in the conversation unless someone directly asks you for your opinion.

7.  Pay attention to who has spoken and who has not.  Say to a person who hasn't spoken, “You usually have really good ideas.  Did you see any evidence you could share?”

Sometimes I even give students more than one slip of paper.  The key is that the students understand that they are to actually act as if they believe is appropriate group discourse at all times in the conversation.  The only exception is completing the task provided on their slip, which only needs to be done once.  The remainder of the time, they should just act as if they are demonstrating excellent group discourse.  (Other than the student that is not supposed to talk unless spoken too.)

With you acting as a group member as well, engage in conversation with the group in the fishbowl and let the discussion questions lead you as a guide.  Let the conversation develop.  Provide no feedback as the conversation is taking place.  Your interactions are key.  Make sure that you interject with comments that are important for the group to hear (even if they are wrong).

Following the discussion, ask the students outside the fishbowl to provide feedback on the discussion in the format of “Three Stars and a Wish” (We go through multiple rounds of this).  Students offer three positive group discourse actions they saw and one wish they would like to see improved.  Explain to the group that it is important to provide feedback in a respectful way and not to judge those in the group.  Emphasize that each group member was given a role of how to act so they may have been making mistakes on purpose! (This takes pressure off the fishbowl participants.)

The following video is one of my classes' fishbowl conversation.  In the video, I added callouts/speech bubbles that indicate the behaviors that students noted in the Three Stars and a Wish reflection discussion.  In addition, I add callouts indicating some examples of students acting out their provided roles.

(The students in this video reference "pg 9".  This is the Skill 4 Notes Page in the Resource section.  Students have already used this document extensively and are familiar with chemical and physical properties prior to this discussion.  If your students aren't familiar with these yet, they should first go through this mini lesson becoming familiar with the text so that it can be a valuable reference during the discussion.)

After the Fishbowl Activity, tell students that they are going to be making S'mores over the Bunsen burners!  In completing this, they should be focusing on the physical and chemical properties that they might notice of the reactants and if any of these properties seem to change.

1.  Goggles must be worn at all times.

2.  Skewers are used for holding the marshmallows over the flames; they are not swords.

3.  Flames of the Bunsen burners need to be held at an appropriate height.

4.  The marshmallow on the skewer is the only material to be brought to the lab station.  Graham crackers and chocolate should remain on the napkin on their desks.

5.  When holding the marshmallow over the flame, if it catches on fire, stay calm, move it out of the flame and blow it out.  I actually demonstrate this for them.

6.  Beware of the drooping marshmallow!  If the marshmallow seems to be drooping off the skewer, it is done!  Too much longer and it might fall on the lab counter which causes for a mess!

7.  When the marshmallow is cooked, it will be hot!  To remove the marshmallow, use the graham crackers and "smoosh and pull".  I again demonstrate this.

8.  Clean up after yourself! 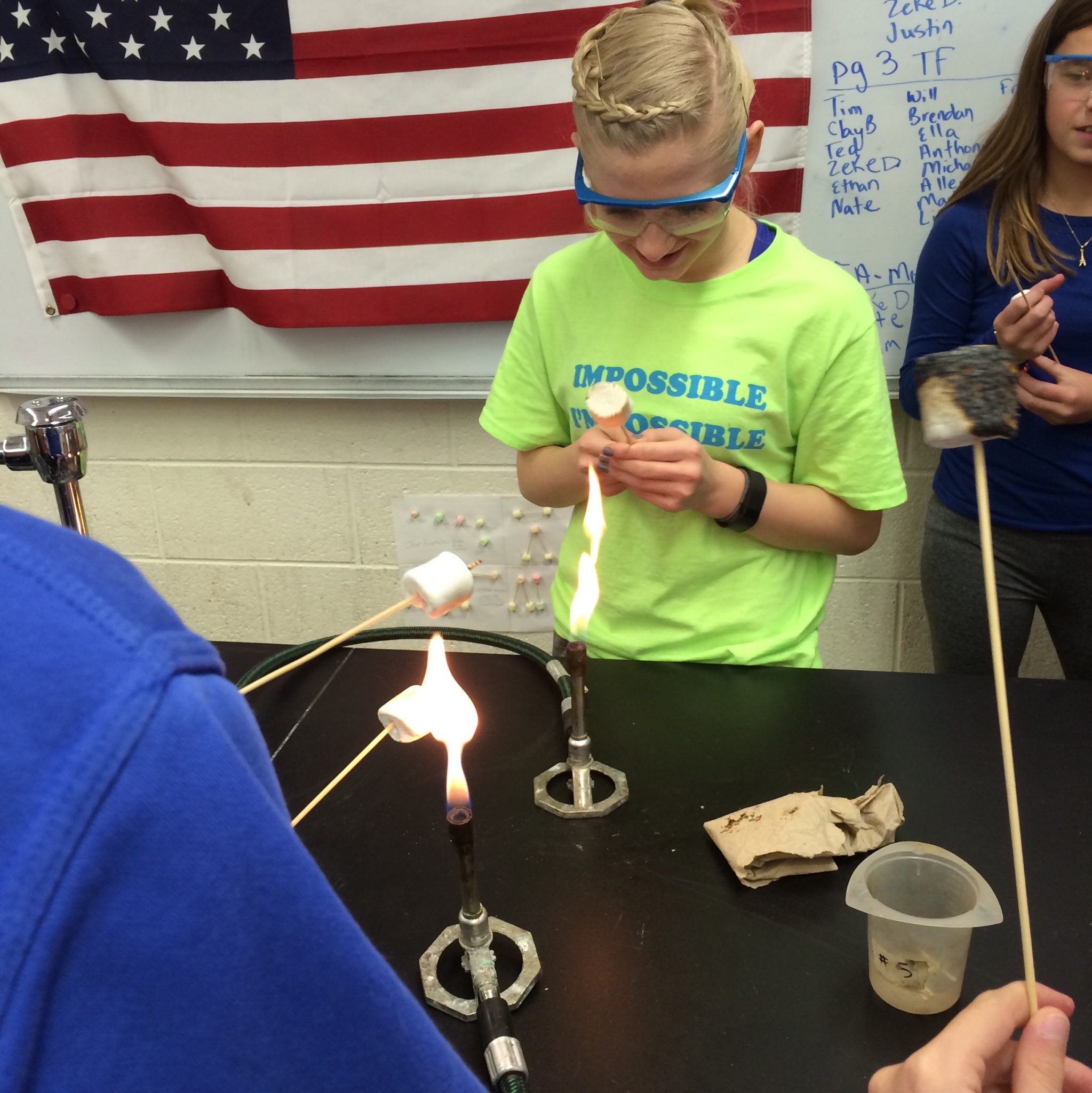 After students eat their S'mores, explain that they will be having a group discussion at their table just as was demonstrated in the Fishbowl Activity answering the question, "What physical and chemical properties did you notice of the reactants?  Did any of these properties change as a result of the reaction?".  Emphasize that they should use the sentence starters they were provided with.  And, emphasize the importance of evidence to support claims (both textual evidence and qualitative observation).

The video below shows a group of students discussing the physical properties that they noticed changing while making S'mores.  Notice that they use some of the provided sentence starters such as, "Do you have any evidence to support that?".  In addition, notice that they have their text in front of them and frequently touch or read the text.  Finally, this group does a great job of allowing everyone time to talk and having each member take ownership in participating in the conversation.

Group discussions in my classroom dramatically improved once going through the Fishbowl Mini Lesson and providing students with the discussion sentence starters.

**Misconception Alert:  During this conversation, a student states that when heat was added that the molecules "expanded".  This is a common mistake among middle school students.  In my classroom, we work towards choosing the right vocabulary for this.  When heat is added, the molecules don't "expand", the object does.  The molecules spread apart, causing the marshmallow to expand.  However, the molecules themselves are not increasing in size.

5 minutes
Slow down and Take Time to Reflect