In this lesson, students work in teams to build a free standing marshmallow tower in order to gain an understanding of building materials and perseverance.
Lesson Author

Melissa Romano
Helena, MT
Grade Level
Fourth grade
Subjects
Science
Building Structures
Standards
MP1
Make sense of problems and persevere in solving them.
MP3
Construct viable arguments and critique the reasoning of others.
3-5-ETS1-1
Define a simple design problem reflecting a need or a want that includes specified criteria for success and constraints on materials, time, or cost.
3-5-ETS1-2
Generate and compare multiple possible solutions to a problem based on how well each is likely to meet the criteria and constraints of the problem.
3-5-ETS1-3
Plan and carry out fair tests in which variables are controlled and failure points are considered to identify aspects of a model or prototype that can be improved.

To begin this lesson, I ask students what engineers do.  I listen to student responses and tell them that today they will be engineers.

Prior to giving student instructions, I prepare sets of materials for groups of student.  Each group of students receives:

One yard of tape

One yard of string

Next, I instruct students that they will be working in groups of 4. I then set up the task that students will work on in the lesson by telling them, "When I say “Go!”, you can get your supplies off of the counter. In eighteen minutes, your team must build the tallest structure out of the resources you get from the counter. Your marshmallow must be at the top, and your tower needs to be able to stand on its own. Keep in mind that you don’t have to use all of the resources.

20 minutes
Why the Marshmallow Challenge

I set the timer from www.timeme.com for 18 minutes and then say "Go."   As students plan and work, I circulate around the room observing student groups.  Some of the things I look for and make note of are:

Which groups are working well together? Why?

Which groups have one or two people doing all the work?

Which groups are working well together with shared responsibilities?

Which groups are persevering?

Which groups revised their plan after a failed attempt?

You can see in the following photographs, samples of students' marshmallow towers. 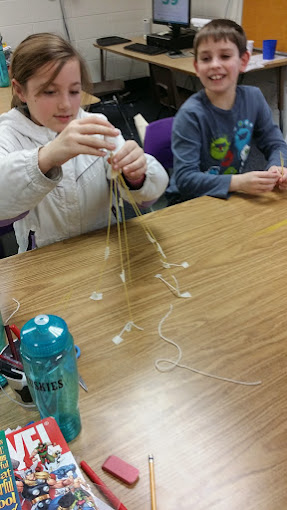 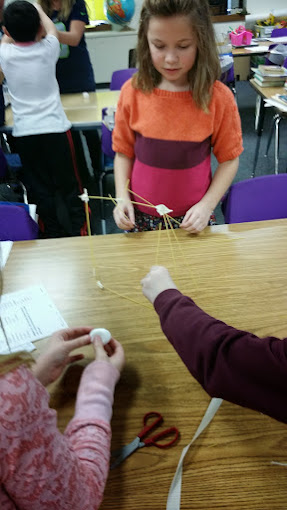 In the following videos, listen as students discuss steps for making their tower.  In the first video, this group had a difficult time working together and did not want to persevere.  In the second video, the group relied on team work.  Each group member appeared to have a role. This second group was much more successful in building a tower that supported a marshmallow.

To end this lesson, I lead a conversation with students about the process of building the towers.  I talk with students about how it felt to work as a team and asked students to identify whether or not they felt like they worked as a team.  Students spend time talking about what worked and didn't work with their structures.

Watch in this video as students talk about the design and building process.

A Jacket for Frosty
3rd Grade Science » Conductors and Insulators