It's all your FAULT!

In this lesson, students use cardboard to build models of three different types of faults as they gain more information about where and how earthquakes form.
Lesson Author

Melissa Romano
Helena, MT
Grade Level
Fourth grade
Subjects
Science
Standards
4.MD.C.5b
An angle that turns through n one-degree angles is said to have an angle measure of n degrees.
4-ESS1-1
Identify evidence from patterns in rock formations and fossils in rock layers to support an explanation for changes in a landscape over time.
4-ESS2-2
Analyze and interpret data from maps to describe patterns of Earth's features.

I also remind students that scientists need to know about faults and where they are located in order to design structures that remain stranding and protect its inhabitants during an earthquake or other activity. Engineers also need to know what type of fault is occurring and how fast and which direction the associated plates are moving so that they can predict what type of formation a fault may be producing, such as a hill or a valley.

Next, I begin this lesson by instructing students to look at the plate tectonic map. (earth tectonic plates map)

I explain that the Earth's crust is also broken into large interlocking plates floating on a molten mantle. At plate boundaries (where two different plates meet), the plates normally crack and break causing earthquakes. These cracks are called faults.

I then tell students that they will make models of how land moves when blocks of rock slide sideways, apart or towards each other.

On the piece of cardboard which represents the bird's-eye view, students should make a line at a 45° angle from a point at the center, actually splitting the cardboard strip in two (the line should angle across the colored road). Students cut along this line. This will be the model of a transcurrent fault.  At this point in the year, my students are able to use a protractor to measure angles. Students use a protractor and pencil to make the angle. 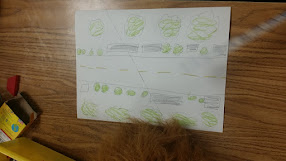 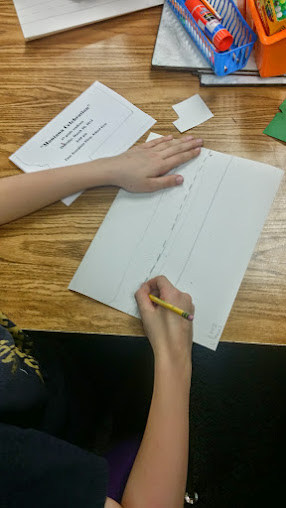 On the piece of cardboard which represents a cross-sectional view of the layers of the Earth, students should mark two points: each approximately 1/3" from each end, on the top portion of the drawing. Next, students should draw a line at a 45° angle from each point to the outside end of the cardboard, so that the lines are angled away from each other. Cut along these lines. This will create a trapezoid piece in the center with the shortest side of the trapezoid at the top of the cardboard. This will be the model of a normal fault.

In this model, students should slide the two outside pieces of cardboard toward each other. The trapezoid in the middle should slide downward. The layers of rock drawn on the cardboard will be displaced.  Normal faults create valleys in the landscape.

To model the third type of fault, I instruct students to take the second set of cardboard pieces and invert them on the table, so that the shortest side of the trapezoid is facing toward them. Again, they should slide the two outside pieces toward the middle. The trapezoid should slide upward, or away from them. This model illustrates a reverse fault. Reverse faults create hills in the landscape.

To wrap up this lesson, I display this website - http://earthquake.usgs.gov/learn/kids/

I direct students attention to the part titled "What is an Earthquake" and help students make connections between earthquakes, fault lines, and plate tectonics.