Students will be able to test Newton's 1st Law of Motion using coins, flash cards, and a cup.

Sean Gillette
Apple Valley, CA
Grade Level
Eighth grade
Subjects
Science
Forces and Newton's Laws
Newton's Laws
Newton's First Law
Newton's Second Law
Newton's Third Law
Standards
7.SP.C.7
Develop a probability model and use it to find probabilities of events. Compare probabilities from a model to observed frequencies; if the agreement is not good, explain possible sources of the discrepancy.
MS-PS2-2
Plan an investigation to provide evidence that the change in an object's motion depends on the sum of the forces on the object and the mass of the object.

PE: MS-PS2-2 - Plan an investigation to provide evidence that the change in an object's motion depends on the sum of the forces on the object and the mass of the object.

Science and Engineering Practices 7: Engaging in Arguments from Evidence

Crosscutting Concept: Cause and Effect

This activity can be used as a stand alone lesson or can be placed with eight other lessons, designed as an exposition to be experienced over three days.

With this lesson students will engage in a short (eight minute) activity designed to demonstrate one of Newton's Laws. It will be the student's responsibility to use evidence recorded during the activity to determine which one of Newton's Laws is being expressed (SP7). Each activity has been carefully chosen to replicate a specific effect (CCC).

I have also developed three demonstrations of Newton's Laws

For the Coin Activity, students experiment with Newton's First Law by pulling an index card out from under a set of stacked coins. The coins will resist the forward motion of the index cards and fall into a cup below (MS-PS2-2). The coins will have inertia (resistance to change) and no force will be imparted on the coin (PS2.A). As the students manipulate this activity for several minutes they will use evidence gathered to prove Newton's First Law (SP7).

For this activity, only a few materials are needed:

Print out a copy of Station Markers. Tape  the Station 1 marker card down to where students will conduct this activity. Each station marker identifies where the activity will take place and provides directions for completing the activity.

Print out a copy of Newton's Laws Exposition packet for each student. The packet includes directions and questions to answer. If you are performing this lesson as a single activity you will only need to print out Activity 1.

This activity is designed to accompany other Newton's Laws Activities. I run this unit as a three day exposition. Day one is reserved for showing all the students the nine activities. Days two and three allow for an eight minute rotation. I typically have my students experience five activities (40 minutes) on Day two and four activities (32 minutes) on Day 3 followed by a recap of the events.

8 minutes
Reason this activity was chosen

Newton's First Law of Motion will be in effect for this lesson. Newton's First Law states that an object in motion will remain in motion and an object at rest will remain at rest, unless acted upon by another force. Objects that have mass, have inertia (resistance to change). The more mass an object has, the more inertia it has, with mass and inertia being directionally proportional. An object with a lot of inertia will resist a force being applied to it. According to Newton's 1st Law an object at rest will stay at rest unless acted upon by another force. if the force is small compared to the mass of the object the force imposed will have little or no observable effect.

Students do not know what specific law of motion they will be experimenting with. They record what they see, gather evidence, and make a decision. Then they use argumentation with their peers about what law they believe is being manipulated.

To perform this activity, students place an index card (or playing card) on top of a small plastic cup, then stack several coins on top of the card. With a flick of the wrist, the cards are pulled out from under the coins and the coins fall into the cup. This activity can be explained by Newton's 1st Law, specifically inertia. Every object that has mass has inertia. The more mass an object has, the more inertia it has. It is a directly proportional relationship. The card's force is not strong enough to influence the mass of the coins. The coins resist the change in motion due to the coin's inertia. According to Newton's 1st Law, an object at rest will stay at rest unless acted upon by another force. In this case, the force caused by the card is too small to cause a noticeable change in the coins. 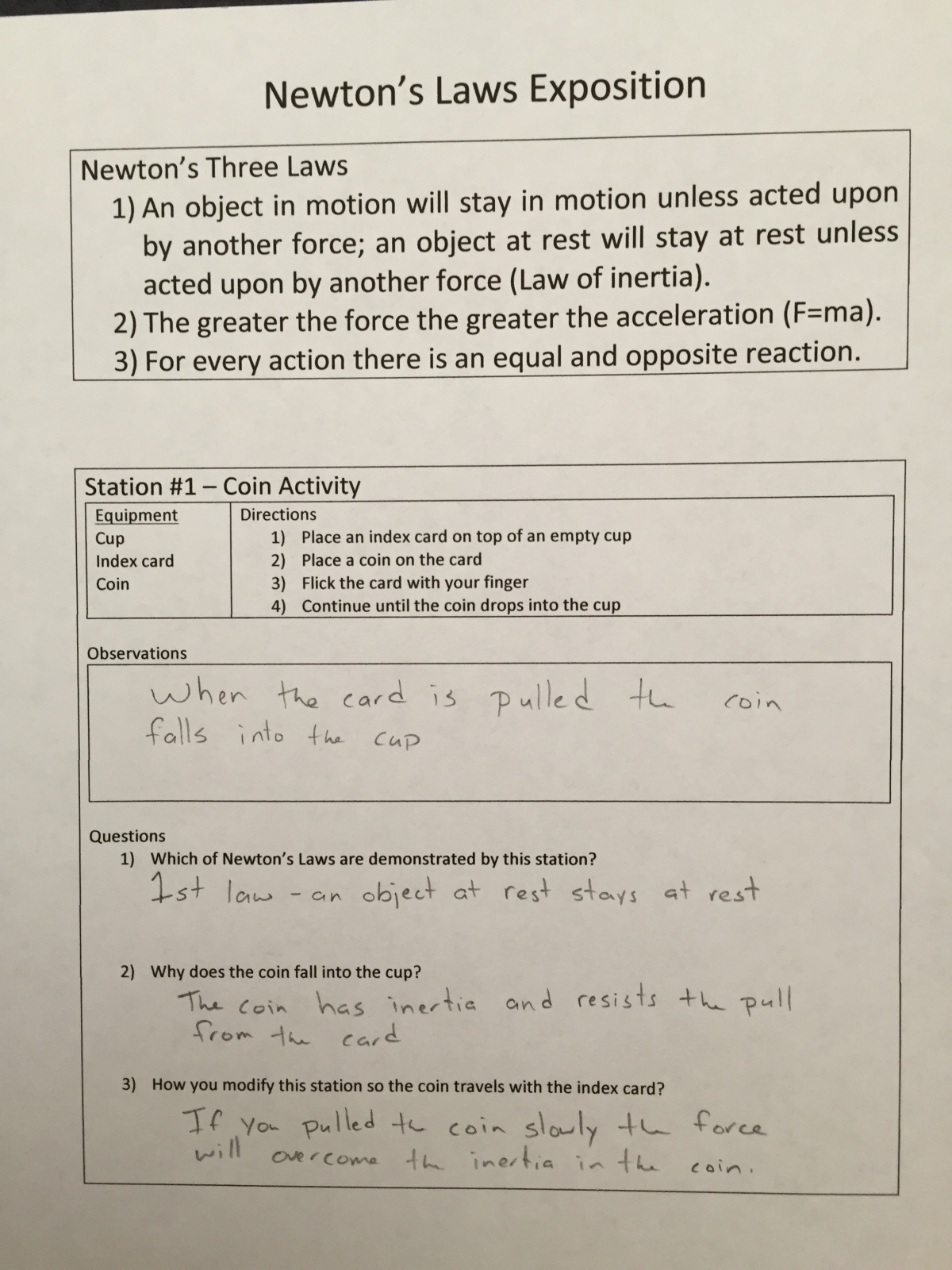 Newton's Law are expressed in a multitude of ways in the English language because Newton's original text ' Philosophiæ Naturalis Principia Mathematica', often referred to as the 'Principia', was written in Latin (as were all scientific articles in that time) and translated into English. As such, there are many different translations, causing confusion with students.

I teach Newton's Three Laws with this translations.

To assist in teaching Newton's Law before this lesson is taught, I have included three Powerpoint lessons: