Students will be able to use lab tools to measure the density of an object and create a model demonstrating the relationship between the density and whether an object sinks or floats.

Students measure the density of a variety of items and create a density column of suspended materials!
Lesson Author

Leigh Roehm
Saline, MI
Grade Level
Subjects
Science
Standards
RST.6-8.3
Follow precisely a multistep procedure when carrying out experiments, taking measurements, or performing technical tasks.
MS-PS1-2
Analyze and interpret data on the properties of substances before and after the substances interact to determine if a chemical reaction has occurred.
MS-PS1-4
Develop a model that predicts and describes changes in particle motion, temperature, and state of a pure substance when thermal energy is added or removed.
SP4
Analyzing and interpreting data
SP5
Using mathematics and computational thinking
SP7
Engaging in argument from evidence

In this lesson, students measure the densities of a variety of objects both solid and liquid.  Then, students make predictions about where the objects will fall when combined in a container.  The suspension created is a great model for demonstrating how density affects whether an object sinks or floats.

This lesson is designed to address the following NGSS and Common Core Standards:

MS-PS1-2  Analyze and interpret data on the properties of substances before and after the substances interact to determine if a chemical reaction has occurred.

In this lesson, students analyze and interpret data to create a model that predicts how density affects if objects sink or float (SP4).

Relating to the NGSS, students their data of mass, volume, and density to create a model that predicts how the density of an object and arrangement of its molecules affects if it will sink or float.  Thus, this connects to the Cross Cutting Concept of “Patterns” which explains that macroscopic patterns are related to the nature of microscopic and atomic-level structure. 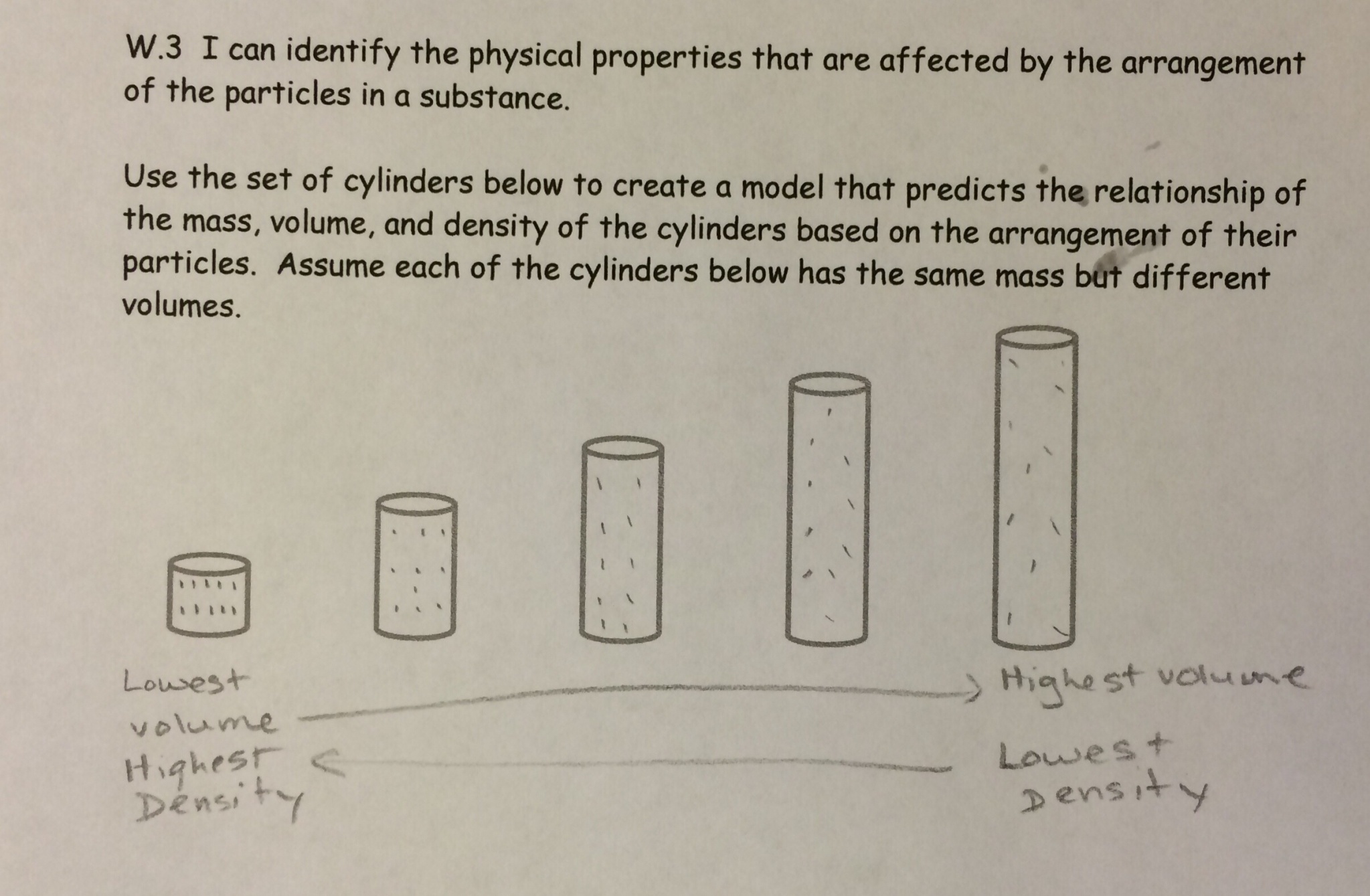 Also, notice that the student added dots in the cylinders to represent the particles.  This is very important.  Many students forget to include this in their model, although it asks for it in the question.  I conference with these students about how to determine the purpose of the question.  Another key point is that you as a teacher count the dots in the cylinders and look at the spacing of the dots.  Simply adding dots in the cylinder isn't enough to show understanding.  As the objects all have the same mass, students will draw the same number of dots in each cylinder; however, in the cylinder with the largest volume, students should draw the dots more spread apart than the others.   If students just put a random number of dots and spacing, it shows that they broke down the question well to identify the purpose of the question; however, they were unable to model how the arrangement of the particles is related to density.

Typically, I conference with the following groups of learners based on this formative assessment:

1.  Students that forget to add particles.

2.  Students that only show one of the variables (density or volume).

3.  Students that add particles, but add random numbers and spacing as opposed to an increasing the spacing for the cylinder with the greatest volume.

4.  Students that incorrectly identify the relationship (they state that a greater volume results in a greater density).

Ask the students, “What are you going to learn today?”.  Students should respond with the Essential Question, “How can the arrangement and motion of the particles in a substance affect its physical properties and how can they be measured?”  I keep this EQ posted on the board and students also have a copy of it in their Density Unit Plan.

Ask students to turn to their unit plan.  Explain that today you will be introducing Skill 2:

D.2  I can provide evidence explaining how a substance’s state of matter affects the arrangement of its particles.

Ask students to silently take a moment to read skill two.  Ask them to underline any key vocabulary they notice in the sentence.  Then, ask them to rank their level of mastery on a scale of 1 to 4 (4 being mastery) by writing the appropriate number next to the skill on their unit plan.  In addition, ask the students to update their scores for skills three and four if they feel it is appropriate to do so.  (Check out this Density Cylinder Lesson in which students are introduced to Skill Three and Skill Four.)

Explain to the students that they will be measuring the densities of a variety of objects including both liquids and gases.  Ask students to recall from their prior knowledge how the arrangement and motion particles in the three states of matter differ.  Within the discussion, be sure students connect to the following:

Ask students to order the three states of matter in order of what is typically the most dense and what is typically the least dense.  Students tend to respond with solids as the most dense and gases as the least.  The key is that the students tie this to the arrangement of the particles in the substance.  Be careful of one thing…..water is actually less dense as a solid.  This can be important to explain to the students.  This example is the reason I tend to say, “solids are typically most dense”.

Say, “Yesterday, we calculated the mass, volume, and densities of a variety of solids.  How can I measure the volume of a liquid?  Should I pour the liquid on a scale?”  Allow students to offer suggestions to determine the procedure for measuring the volume of a liquid.  They should come up with these steps:

Another tip about using beakers for measuring density that ends up being important for this lesson is that students realize that all beakers in the lab have different masses.  They may appear to be the same, but they all have variations.

Allow groups time to work through the stations recording their data on the Density Column Student Lab Document as they go.  I allow students to use calculators and their Density Reference Sheet. Remind students the importance of using units and when reading a volume of water they should measure from the meniscus.  I also encourage groups to divide the work and share data.  After collecting their data, groups check in with me to get their data “approved”.  If students are off on items, I send them back to the station to measure again. 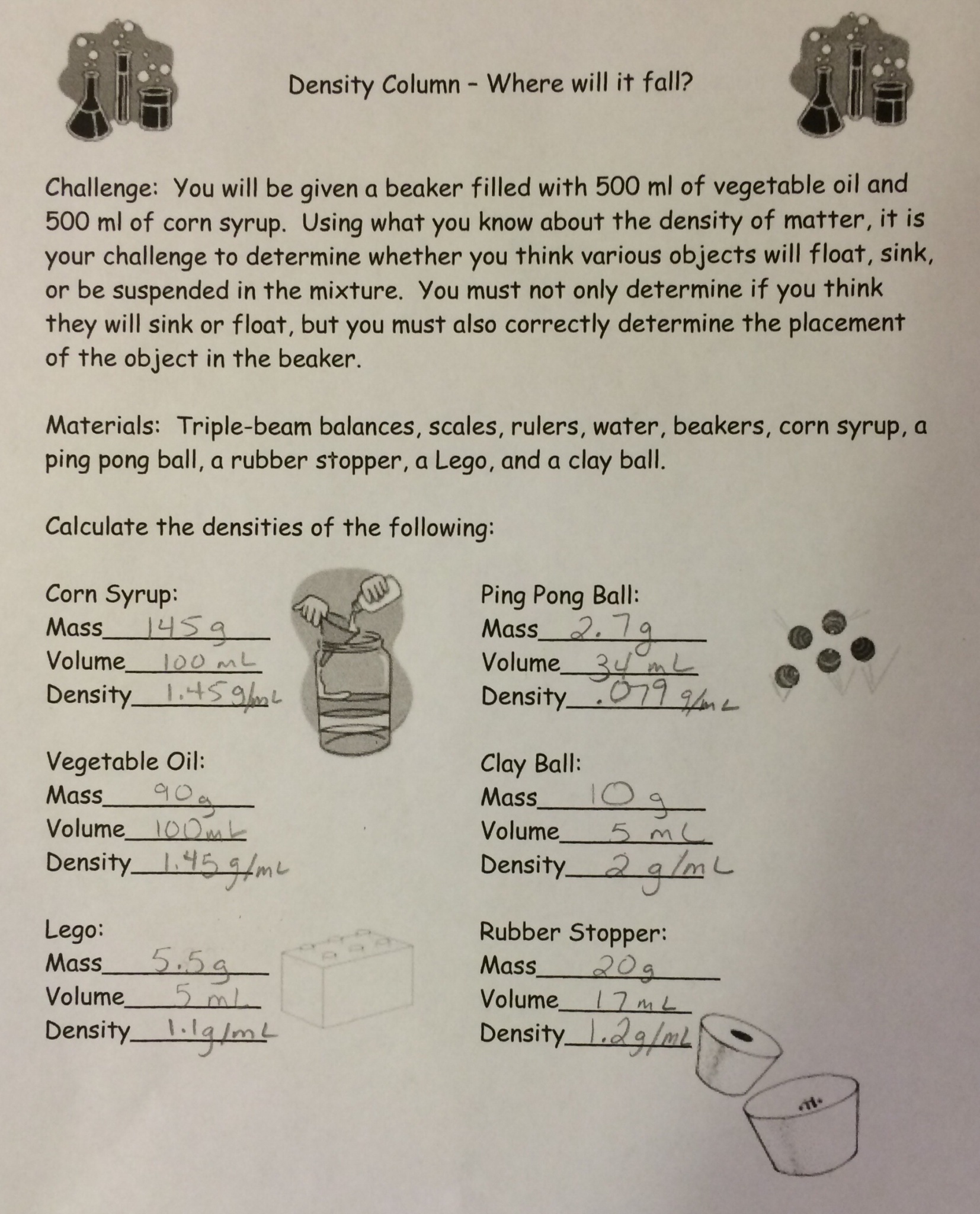 Lab Set Up and Teacher Tips

Create stations around the classroom for each of the following items:

Each station should also include graduated cylinders and scales.

*Check these before you use them.  You need to choose those that sink in vegetable oil but float in corn syrup.  Sometimes, simply taping or covering the holes in the stopper will do the trick.

**Vegetable oil and corn syrup can be difficult to clean out of beakers and off counter tops.  I often pre-pour these liquids and simply provide the mass of the empty beaker at the station so that I only have one vegetable oil beaker and one corn syrup beaker to clean.

After collecting the data, ask students to make a prediction on their lab sheet of what they believe will occur when the objects are all placed in one container.  On the provided beakers on the lab sheet, students should label the liquid layers and then draw pictures of the objects at the position in the beaker they believe the object will “fall”.

In the student work below, on important thing to note is that in the middle section, the student has some conceptual awareness to work on.  The student drew the objects in order going doing from least dense to most dense.  However, they have placed the Lego as "hovering" in the middle of the liquid and not at the boundary between the vegetable oil and corn syrup.  Students need to understand that the objects will either sink or float in a single liquid, they are not going to "hover" within it.  Notice that the student did correct her understanding in the second drawing.  Students complete the second drawing after completing the lab. 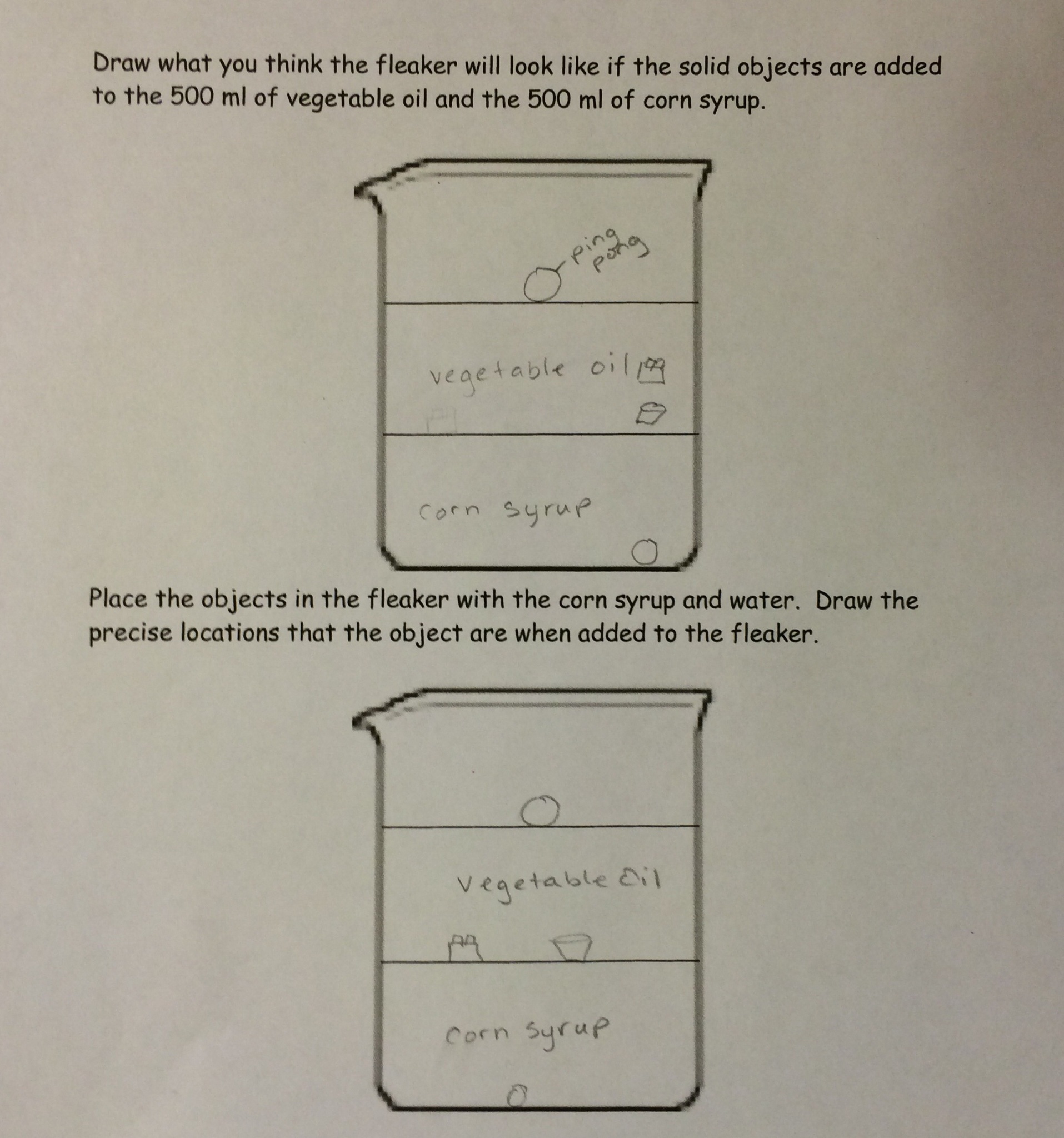 After each individual student makes their individual predictions, have groups meet to discuss their ideas and make a group prediction.  Emphasize to students that when making their predictions they must provide data that supports their claim.  Let groups know that if a student offers an idea with out providing data, they should follow up with the question, “What data is there to support that idea?”.

In the video below, notice that these ladies do a few very important things as they discuss their predictions:

2.  They touch the data with their fingers.  We practice this.  It allows the group members to visually see where they are getting their data.

3.  They compare the density of the solids to the densities of the liquids.  Without the comparison, the data is not effective as evidence.

I pre-pour the containers with the corn syrup and vegetable oil (Pour the corn syrup in first.).  The reason for this is two-fold.  One, students have a hard time pouring and they can tend to make a mess.  Two, I reuse my containers each hour so I can use less of these liquids to save on cost and have less to clean up.  At the end of each hour, I have the students use tongs to remove the objects from the liquids, rinse them, and sit them on paper towel for the next class.

Once groups have discussed their predictions, they are asked to place the solid objects in the liquid in order from the objects they think will sink to the objects that will float.  The video below shows the same group in the previous video completing this task.  After looking at their suspension, they are to redraw the actual suspension in the second beaker provided on their lab sheet. 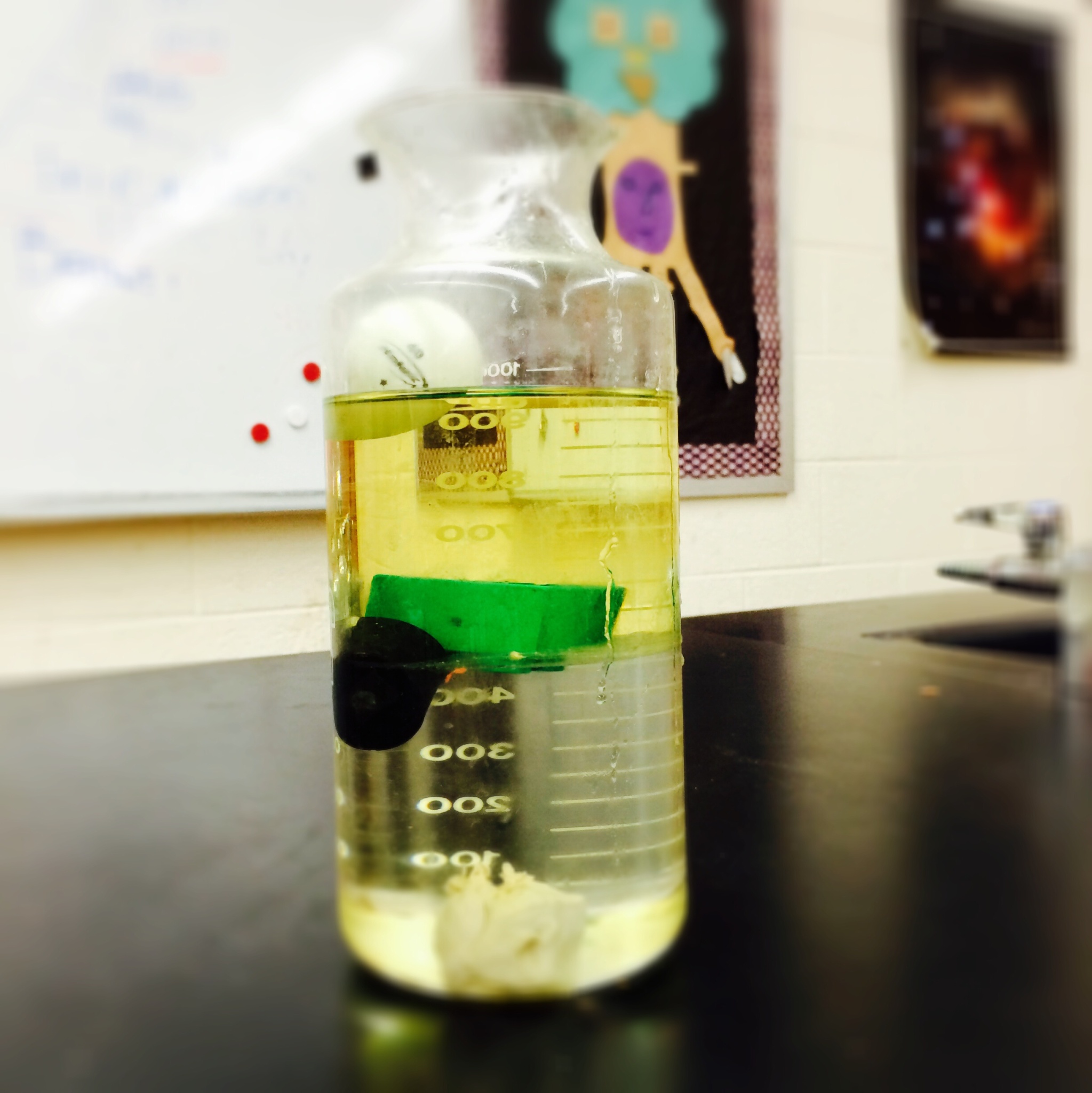 Once groups complete their columns, stop the whole class and ask this question:  "I want to add a gi-normous clay ball that is twice the size of the clay ball we measured.  Would this be fair?  Would we expect the same results?"

Students have a hard time with this one.  They still have not quite developed a conceptual understanding that density is proportional.  Some students will say that it would not be fair because the density would be twice as much if it is twice the size.  It is a great opportunity to show the students the proportionality of density.  There are two ways I explain this:

To close, show the students another object and provide them with the density.  The object can be of your choice.  Tell the students you are going to add the object to the density column.  Have them either write in words or draw a picture on their slip of paper where they believe the new object would fall.

**In the resources section, I have also included a Formative Assessment that references this lesson.  I use it as a warm up in a future lesson.  Check out this lesson for a look at student work and insight into what is important about this resource.