The student will be able to describe how changes in objects' arrangement also changes potential energy, and identify the relationship between the speed and the kinetic energy of an object.

Leigh Roehm
Saline, MI
Grade Level
Subjects
Science
potential energy
Energy (Physical Science)
Energy and Thermodynamics
Standards
WHST.6-8.1
Write arguments focused on discipline-specific content.
WHST.6-8.1.b
Support claim(s) with logical reasoning and relevant, accurate data and evidence that demonstrate an understanding of the topic or text, using credible sources.
MS-PS3-1
Construct and interpret graphical displays of data to describe the relationships of kinetic energy to the mass of an object and to the speed of an object.
MS-PS3-2
Develop a model to describe that when the arrangement of objects interacting at a distance changes, different amounts of potential energy are stored in the system.
SP5
Using mathematics and computational thinking
SP6
Constructing explanations (for science) and designing solutions (for engineering)

In this two day lab, students experiment to see how the angle of a rubber band launch affects the kinetic energy of the rubber band.  Students recognize that energy can take many forms such as elastic potential, gravitational potential, and energy of motion (Cross Cutting Concept:  Energy and Matter).   In addition, students track the energy transfer through a system (Cross Cutting Concept:  Energy and Matter) by exploring the path of the rubber band and how the amount of potential energy and kinetic energy changes throughout its flight .  In addition, students use mathematics and conceptual thinking as they calculate calculate velocity and analyze graphs (SP5) and work on constructing explanations as they write a fully developed paragraph explaining the relationship between the amount of potential energy stored in a system and the amount of energy that is transferred into kinetic energy (SP6).

This lab connects to the following NGSS and Common Core Standards:

MS-PS3-1  Construct and interpret graphical displays of data to describe the relationships of kinetic energy to the mass of an object and to the speed of an object.

MS-PS3-2  Develop a model to describe that when the arrangement of objects interacting at a distance changes, different amounts of potential energy are stored in the system.

**The lab itself may only take one class period.  However, if you follow up with the analyzing graph and constructing explanations work, it will require a second class period.

Ask students, "What are you going to be learning today?".  Students should respond with the essential question, "How does energy transfer through various systems in the natural world?" (I keep this posted on the board.  Students also have it in their Unit Plan.).

Explain that the students will specifically be introduced to Skills 1, 2, and 5 listed in the Unit Plan:

1.  I can construct and analyze graphs, charts, and figures that show the relationship between kinetic energy and the mass and speed of an object.

2.  I can describe and model situations in which different amounts of potential energy are stored in a system.  (ex.  Elastic, gravitational, magnetic, chemical, etc.)

5.  I can support the claim that when the kinetic energy of an object changes, that energy has been transferred to or from the objects in the system (energy is conserved).

**Important Note:  As this is the beginning of the unit, it is critical that students assess their level of understanding on this day.  Without this original self assessment, it is challenging to chart and monitor growth in each skill.

Then, ask the students to make as many connections during the lab to the following ideas/concepts:

1.  The relationship between the speed and kinetic energy of an object

2.  How the potential energy stored in objects can change based on their position or arrangement

3.  Energy transferring from one object to another object

Remind them if at any point during the lab they connect to any of these ideas, they should share that connection with you or a fellow student!

The short version of this mini lesson includes:

The full, longer version of this conversation may unfold like this:

Student:  "Potential energy is stored energy and kinetic energy is energy of motion."

Teacher:  "We also learned that there were many kinds of each of these.  What were some forms of potential energy?"

Teacher: "What were some forms of kinetic energy?"

Hold up two identical objects.  Hold one up above your head and one low.

Student:  "The one that is up higher."

Student:  "The one with the larger mass."

Teacher:  "Yes!  What is important to recognize about both types of potential energy I just described is that the position of the object affects how much energy can be stored.  For example, stretching a spring farther and farther or raising an object up over my head can change how much potential energy there is."

Stretch a rubber band back and "point" it at a student as if you were going to launch the rubber band (Don't actually launch it!).  Students typically put their hands up to block the rubber band or scoot back away from you.

Teacher:  "Why are you scared?  What are you worried about?"

Student:  "If you let go, it would launch and hit me!"

Teacher:  "Oh!  You are noticing something important!  Stored energy in the rubber band could transfer into kinetic energy and make the rubber band move.  It is important to realize that energy is conserved in this transfer.  That means that energy isn't lost, it just transfers or changes forms.  For example, if I pulled this rubber band back a smaller distance, you might not be as scared of me hitting you with it.  If I store less energy, there will be less energy transferred into kinetic energy."

After watching the simulation, ask students to describe what they noticed about energy transfer.

Teacher:  "The last big concept I want you to connect to today is that when the kinetic energy of the object changes, that means that energy was transferred from one object to another object."

Take a plastic spoon and pull it back.  Set a ping pong ball on it and launch it across the room (Don't hit anyone!).

Teacher:  "Were there any objects in the system that made change in kinetic energy?"

Student:  "The spoon and the ball." (It is important that students recognize the spoon changed its kinetic energy as well.  Sometimes middle school students focus on the movement of the ball."

Teacher:  "When these objects had a change in kinetic energy, did energy transfer to or from an object?"

Student:  "Energy transferred from the spoon to the ball."

Teacher:  "Yes!  Today, we are going to be using rubber band cannons to demonstrate these skills!"

Provide students with the Rubber Band Cannon Lab Student Document.  Show students how the rubber band cannon works and how to change the angle of the cannon.  Explain that students will need to time the rubber band's flight as well as the distance that the rubber band traveled.  Turn their attention to the data table to show them where they should enter their data.  Students will need explanation for how to calculate velocity.  I always have them look at the unit for velocity (m/sec).  This means that velocity can be calculated by dividing meters by seconds.  Point out that there is a column in the data table for Distance which is measured in meters and that there is a column in the data table for Time which is measured in seconds.  Let students know that they will be able to use a calculator.

Explain to the students that they will be completing an experiment that answers the question, "How does the angle of the launch affect the kinetic energy of the rubber band?"  Let students know that they will need to write their hypothesis prior to getting their materials and beginning.

Students spend the remainder of the class collecting data and completing the lab sheet.  The video below shows this.

45 minutes
Graphs and Analysis: It's important!

On day two of this lesson, students work with graphs and constructing explanations.

Following the completion of the lab, have a class discussion about the discussion questions on the lab sheet.

Then, provide students with the Graphing and Writing Explanations Student Worksheet and provide them with time to complete it.  The Answer Key to this document is included in the resource section.

**At this point in the year, I have already taught students about graphs, variables, and writing ABCDE paragraphs.  The ABCDE Paragraph is a format I have found very successful in writing scientific explanations.  I have included some resources for you about writing scientific explanations and the use of this strategy in other lessons, Amazing Lab Station Rotation, and Refracting Telescopes Day 2.

In a written exit slip, students are asked to provide a real world example of each of the lesson foci:

1.  An example of when the speed of an object affected the amount of kinetic energy.

2.  An example of the position or arrangement of objects in a system affecting the amount of potential energy stored in a system. 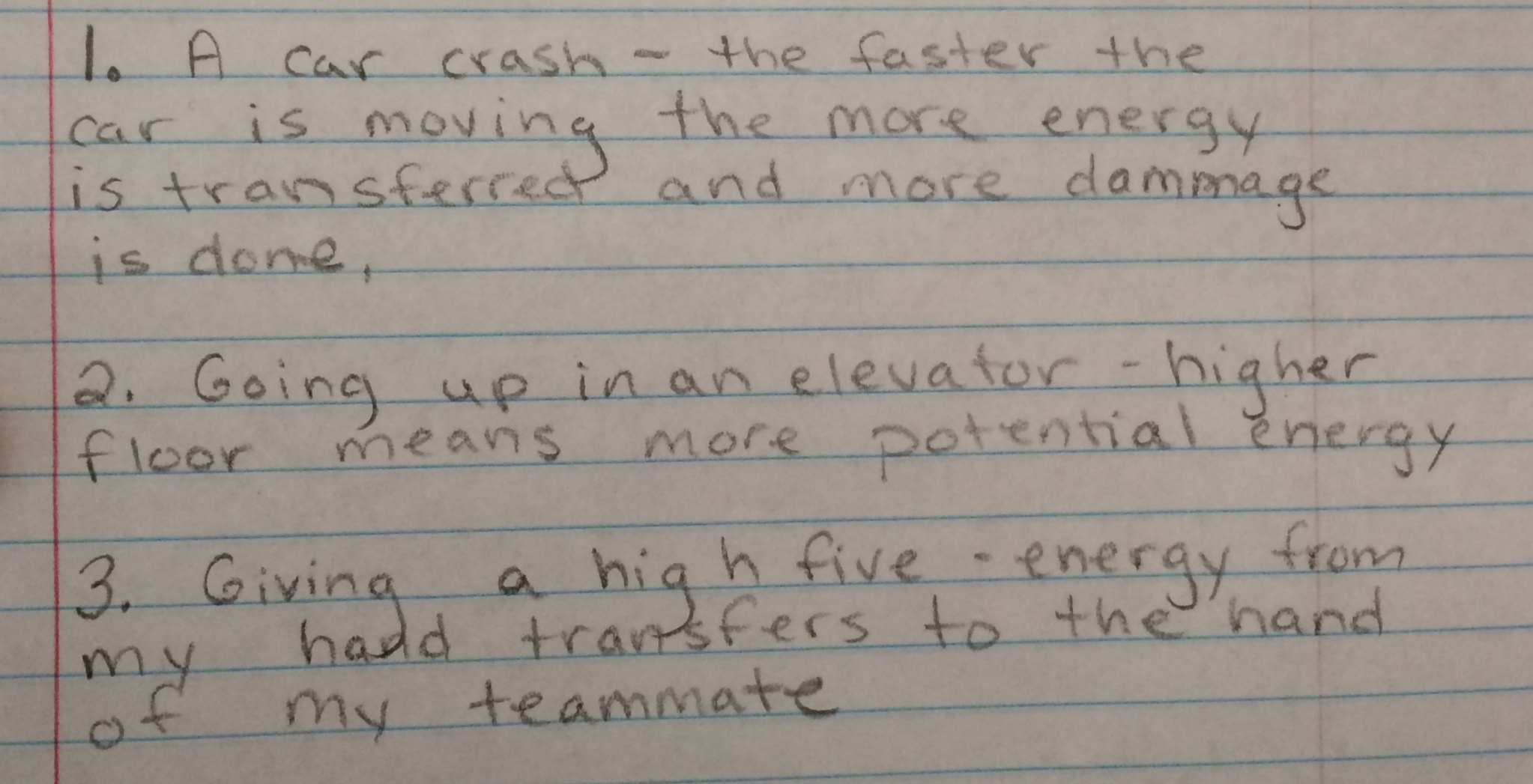