SWBAT create a stop-animation video that shows what happens on the molecular level during a simple chemical reaction.

Bonds are broken and atoms are rearranged before forming new bonds during a chemical reaction; Matter is conserved.
Lesson Author

Emilie Hill
Los Angeles, CA
Grade Level
Ninth grade
Tenth grade
Eleventh grade
Twelfth grade
Subjects
Science
Chemistry
Chemical Reactions and Balancing
Standards
HS-PS1-2
Construct and revise an explanation for the outcome of a simple chemical reaction based on the outermost electron states of atoms, trends in the periodic table, and knowledge of the patterns of chemical properties.
HS-PS1-4
Develop a model to illustrate that the release or absorption of energy from a chemical reaction system depends upon the changes in total bond energy.
HS-PS1-5
Apply scientific principles and evidence to provide an explanation about the effects of changing the temperature or concentration of the reacting particles on the rate at which a reaction occurs.
SP2
Developing and using models
SP6
Constructing explanations (for science) and designing solutions (for engineering)
SP8
Obtaining, evaluating, and communicating information
XC-SPQ-MS-4
Scientific relationships can be represented through the use of algebraic expressions and equations.
XC-SSM-HS-3
Models (e.g., physical, mathematical, computer models) can be used to simulate systems and interactions—including energy, matter, and information flows—within and between systems at different scales.
XC-EM-HS-1
The total amount of energy and matter in closed systems is conserved.

This lesson is a "how-to" for students to complete their first culminating project (of two) that will be used as a summative assessment for this unit.  It is part of a 5-day in class project, followed by a week of out of class time.  The in-class portion timeline is detailed below:

Having students create an end product (in this case, a video) that demonstrates their understanding of what happens at the molecular level during a chemical reaction addresses multiple Science and Engineering Practices.  First, students will be making and using models to show a chemical reaction occurring (SEP 2).  Students will need to verify the molecular structure of their reactants and products after identifying a chemical reaction to use in their videos which involves obtaining and evaluating information.  Then, they will be communicating information through the form of video (SEP 8).  During the video, students will construct explanations of conservation of matter and molecular rearrangement (SEP 6).

Multiple Performance Expectations are also addressed.  Students are creating a video that shows the outcome of a simple chemical reaction by modeling that reaction and providing detailed explanation as to what is occurring to the bonds and atoms in the reactants to make the products, directly addressing HS-PS1-2.  Two more Performance Expectations are indirectly addressed: HS-PS1-4 and HS-PS1-5.  Students must understand what occurs on the molecular level during a chemical reaction in order to address the changes in bond energies resulting in endothermic or exothermic reactions (HS-PS1-4).  In order for students to understand how changes in temperature or concentration effect reaction rates, they must have a basic understand of the molecular interactions during a chemical reaction (HS-PS1-5).

In order to facilitate our group meetings, I explain what students should expect.  I address the class as a whole with the information that each group will need so that I spend no more than 3-5 minutes with each individual group (thereby meeting with each of 11 groups in my class in one period--if you have fewer groups, more time can be spent in each individual meeting).

I ask students to take out their Video Preproduction Scoring Rubrics that were handed out to them on Day 1 of the project.  I keep extras available for the groups that do not have that rubric with them.  It is important that students do not mix up the Final Project Rubric with the Pre-Production Rubric.  Only pre-production is being assessed today.

I explain that one skill that is critical for success on the job or in higher education is the ability to accurately self-assess.  I explain that honesty is a very important part of an accurate self-assessment.  I use the example of an employee who thinks he is doing a great job, but his boss thinks the report is terrible.  If the employee had honestly assessed his own work ahead of time, maybe he would have been able to turn out a much better end product and his boss would have been pleased.  In college, there is less feedback from instructors.  It is important to know what topics you are understanding well and which topics you should focus on during your study time.  If you trick yourself into believing you don't need to study at all, then you will suffer the consequences of doing poorly.  And, if you just focus on everything instead of what you really need to study, you may not improve in your weak areas enough.

After explaining the importance of honest self-assessment, I ask groups to rate themselves (as a group) using their Pre-production Rubric.  I explain that I will also be rating them using a different copy of the same rubric after we meet.  I will compare my scores to group scores to look for glaring disagreement, and students will get to see both rubrics when we meet again.

I put a stack of Pre-Production Rubrics on a clipboard and visit each individual group.  As the rubric shows, I am looking at 5 key categories and scoring them from 4 (highest, and rare) to 1 (lowest).  I think of the grading scale as:

I explain (when distributing the rubrics on Day 1) that students should seek 4's, but not be disappointed with 3's.  The rubric has explicit checkpoints that indicate what can be done to earn each level.

The 5 key categories assessed by the rubric are:

During student meetings, I begin by asking one specific person by name to summarize the storyline of the video in 2 or 3 sentences.  I usually choose someone who may typically not pay attention in class or someone who may not have appeared to really be participating in the group, if a student like that is a member of that particular group.  I want to make sure that everyone in the group knows what is going on and is actively participating, otherwise that student may not get the benefit of learning the content they are trying to communicate through this video project.

If the student I chose to explain the concept struggles, or if there is something that someone wants to add, I allow that, but only after the student I called on has finished.

I check for a script, either included on the storyboard template or written separately.  I ask if students plan to voiceover or if they plan to use only text on screen.  If something seems unclear in their storyboard or script, I say so and ask how they could change it to make it better.

During Days 3 & 4 of the in class time for this project, the Set Designer should have completed the character/atom design and guided the other group members in cutting them out and preparing the set.  I provide students with ample construction paper, scissors, glue, tape, and other art supplies they think of that I have available in class.  Some students prefer to bring in their own materials, which is appreciated.

During the meeting, I make sure to point out at least 3 things that I think are on target or being done well.  Some sentence starters I use include:

I also am looking for things that will cause a lower score on the final video product now, while students still have a chance to change it.  Things I am checking for include:

I direct my feedback to ensure that groups who do not have 'yes' answers to the above questions have the opportunity to fix their video content BEFORE going into final production and editing.

Students will have another week outside of class to finish the video project.  They have access to class computers with Windows Movie Maker, which they have already learned how to use at the beginning of the school year (check out this lesson).  I keep my classroom open during nutrition and lunch, and am on campus afterschool several days a week so that students can use the resources in my room if necessary to complete their project on time.

The Value of Rubrics for Projects

There are three groups that I am sharing samples of the complete process for: Group 1, who has an exemplary final product; Group 2, who has a high quality product that meets the expectations; and Group 3, who has an average final product.  For each group, I am including the Video Preproduction Rubrics (both their evaluations and mine), my checked off Video Guide for Grading (that I complete while watching the videos--usually it takes me 2-3 viewings to complete), and the Video: FINAL PRODUCT Rubric with final grade. 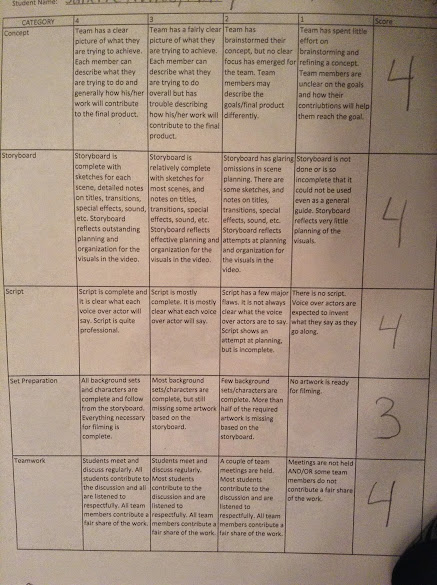 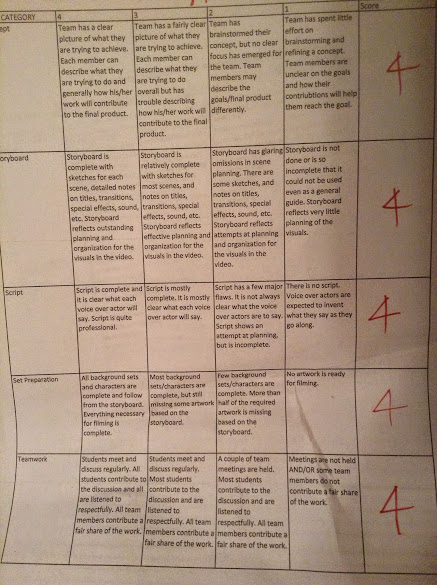 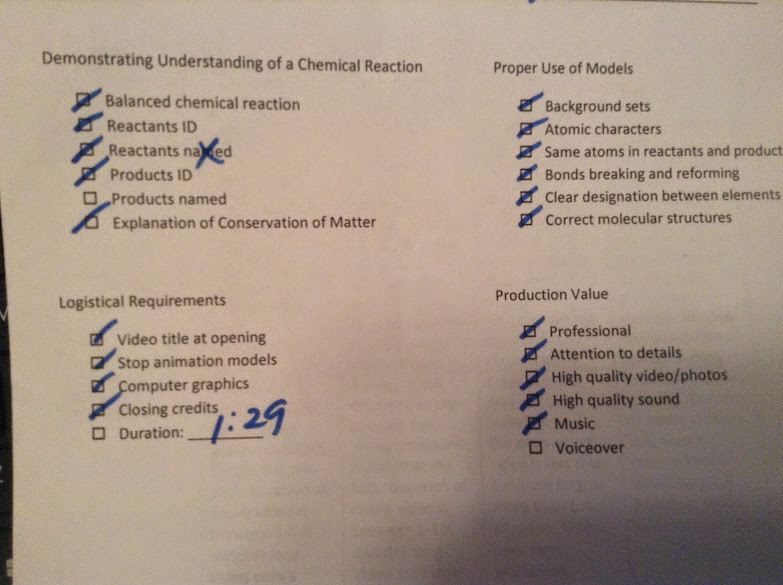 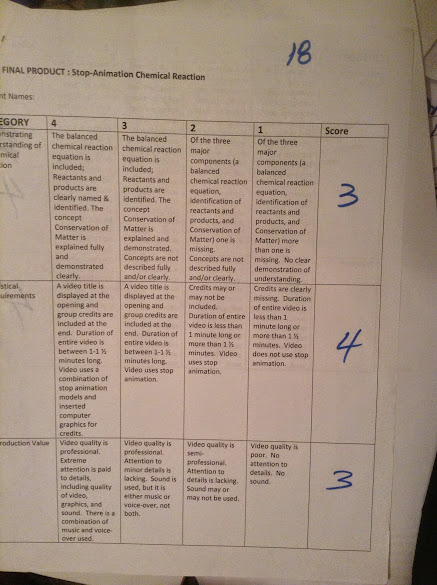 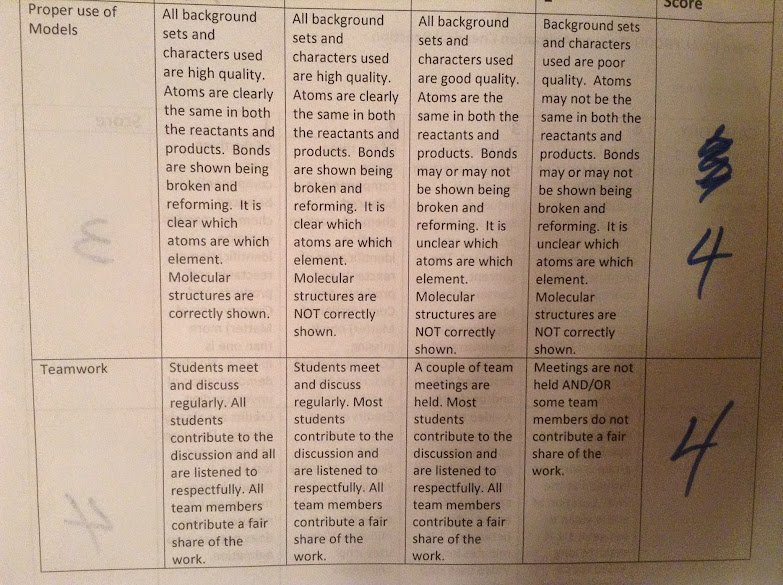 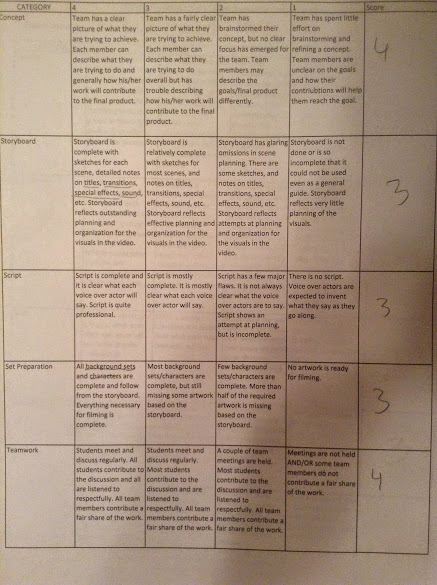 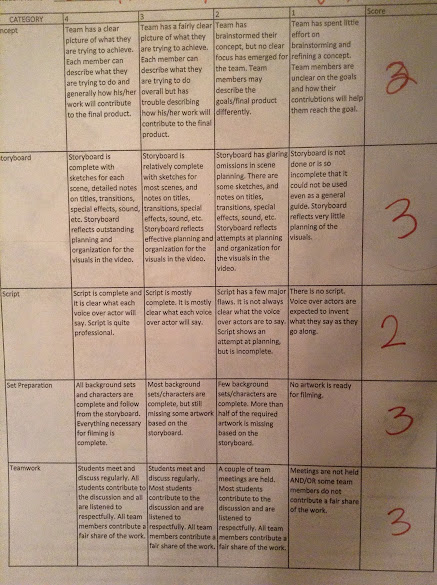 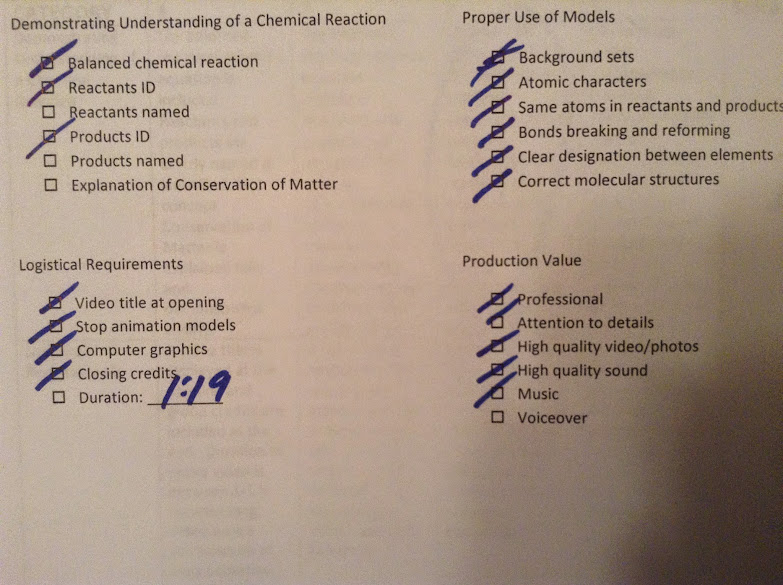 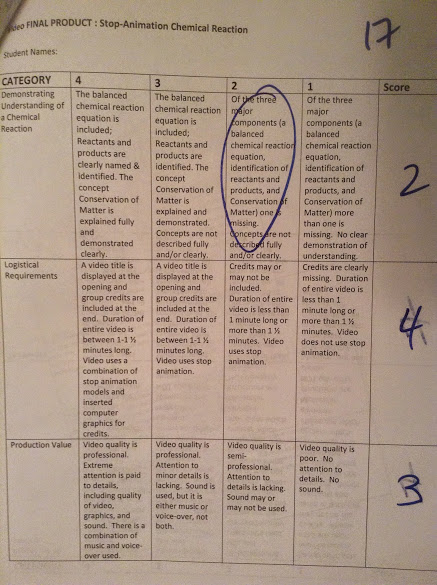 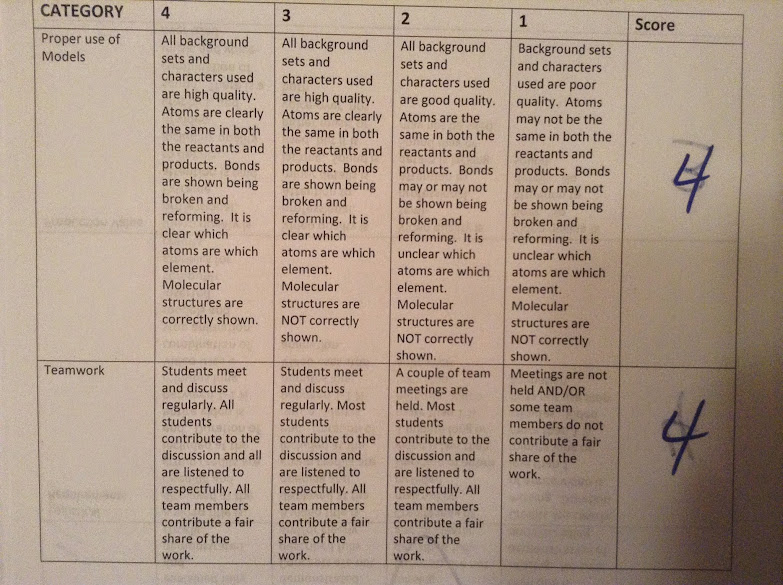 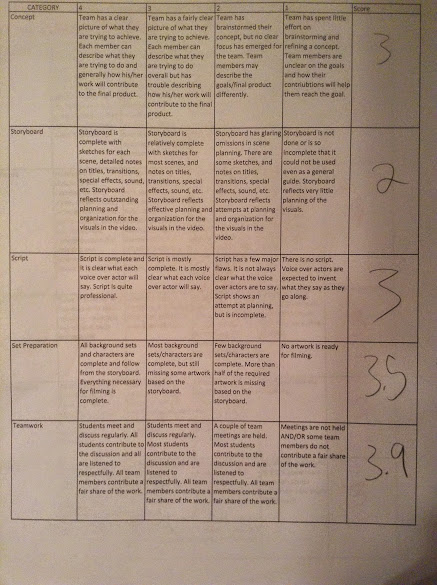 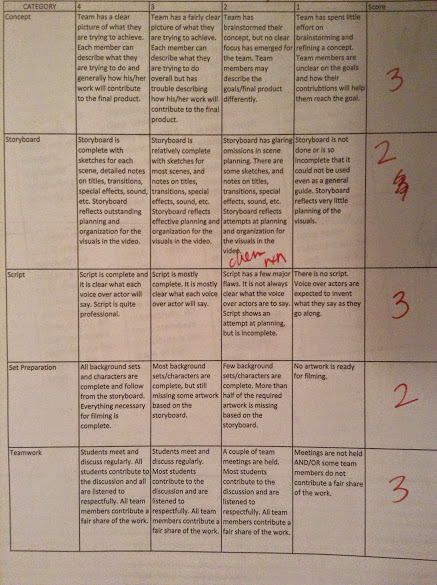 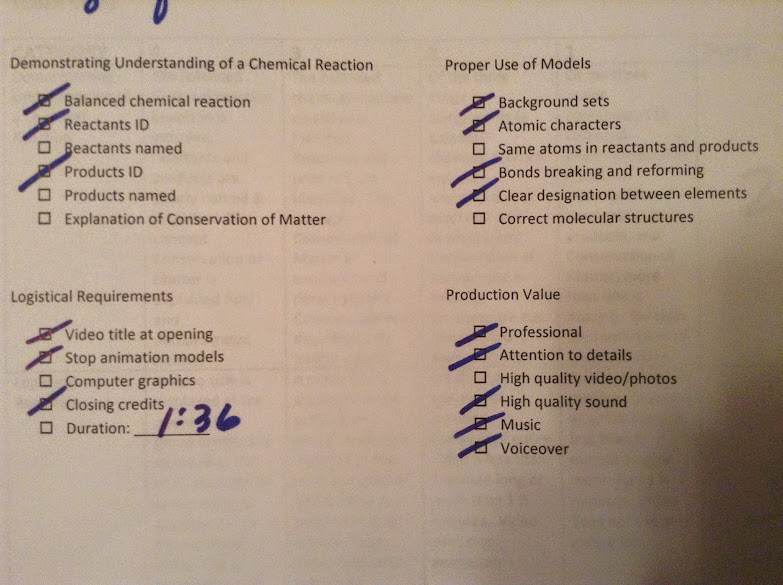 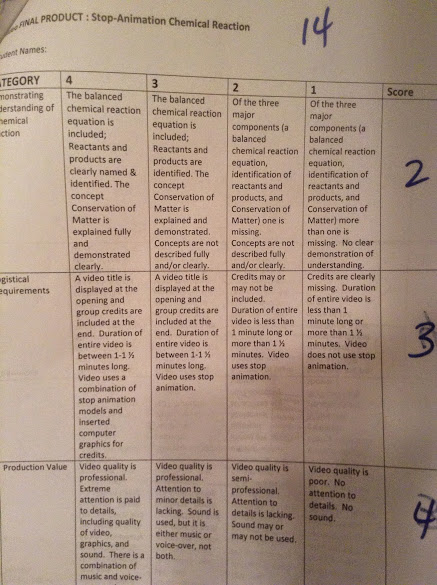 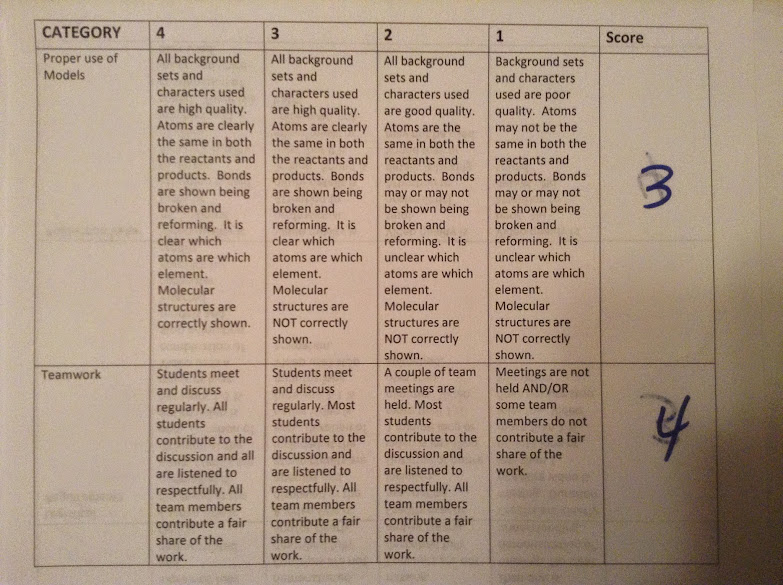 I am also including two other student videos completed by my students this year to show the variety of ideas that students will use.