Students will be able to explain the similarities and differences between light waves and sound waves.

Students engage in the opposite of notes, or "un-notes", as they are introduced to sound and light wave interactions with hands on exploratory activities and engaging demonstrations.
Lesson Author

Leigh Roehm
Saline, MI
Grade Level
Subjects
Science
Waves
Sound
Light
mechanical wave
Standards
MS-PS4-2
Develop and use a model to describe that waves are reflected, absorbed, or transmitted through various materials.
SP2
Developing and using models
XC-P-MS-3
Patterns can be used to identify cause and effect relationships.
XC-CE-MS-2
Cause and effect relationships may be used to predict phenomena in natural or designed systems.

MS-PS4-2 Develop and use a model to describe that waves are reflected, absorbed, or transmitted through various materials.

Specifically, this lesson is targeting the Disciplinary Core Ideas PS.4 A and PS.4 B which state, "A sound wave needs a medium through which it is transmitted." and "However, because light can travel through space, it cannot be a matter wave, like water and sound."

In the upcoming lesson, students will investigate absorption, reflection, and transmission specifically.  However, this lesson can prepare them with some knowledge about how waves travel before they can begin to develop their own models in the upcoming days.

This lesson is titled, "Un-Notes", which is a title that my students actually created.  In these notes, students are provided with all of the notes instead of writing them down like traditional notes.  During these "Un-Notes", students only write down concepts, ideas, and relationships that they develop themselves.  Any information like definitions that I am "telling" them, is provided for them on their answer sheet.  This opens up the notes to be much more interactive.  Thus, I can review a definition or concept and then have the students view a demonstration or short hands-on model to develop their own understanding of the definition or concept I just provided (SP2) and identify causes, effects, and relationships between the concepts I introduced.  In addition, students identify with the crosscutting concept that events have causes, sometimes simple, sometimes multifaceted. A major activity of science is investigating and explaining causal relationships and the mechanisms by which they are mediated.

Students begin with a quick Formative Assessment asking them to draw general relationship graphs between the properties we have been exploring including amplitude, frequency, and wavelength.  This is a skill taught and practiced in the previous lessons.  The included resource includes 3 formative assessments per page.  I cut them into slips to give to the students.

**I use this assessment to determine grouping and conferencing groups for an upcoming lesson. This is explained in detail in my reflection.

Connection to the Essential Question: What am I going to learn today?

Ask the students, "What are you going to be learning today?".  Students should respond by referring to the Essential Question that I have posted on the board and on their Unit Plan:

What are the characteristic properties of waves and how can they be used?

Explain to the students that today, they will be beginning to develop ideas about how light and sound waves travel and interact with matter (specifically referring to Skill 1 on the Unit Plan).  Explain that there are two big ideas we need to be connecting to today:

1.  Sound waves require matter to travel while light does not.

On each student desk, provide two glasses (it must be glass) filled with different amounts of water.  (While drinking glasses work the best, I have gotten this to work with beakers!)

Ask the students to stick their finger in the water to get the tip a little wet.  Then, they should put their finger on the rim of the glass and move it around the rim in a circle until they create a sound.  Ask them to observe the glass and the water closely, take note of what their finger feels, and note any differences in sounds between the two glasses.

After they have time to experiment, have a class discussion about the following:

1.  What qualitative observations did you make about how your finger felt as you moved it? (vibrations)

2.  What qualitative observations did you make about the water in the glass as you made the sound? (waves)

Say, "Absolutely!  The vibrations caused by your fingers created a sound!  The sound moved through the water creating waves in the water.  Sound is what we call a mechanical wave.  It must transfer through matter.  In this case the sound traveled through the glass and the water."

3.  Did you notice a relationship between the amount of water and the pitch of the sound? (More water results in a lower pitch.)

4.  Why do you think this relationship occurs? (With more water, the wave has to travel through more water and it thus travels at a slower frequency which results in a low pitch.)

Say, "We just noticed that sound traveled through matter.  Now we are going to examine how sound waves in general travel and interact with matter and how that is different compared to how light waves travel."

Obviously, actually experimenting and completing this demonstration themselves will provide the most impact for student learning; however, if you can't find the right glassware for all of your students, here is a video of a student playing "Mary Had a Little Lamb" using the same technique. You could share this with the class and have them make observations about relationships during the video.

Light vs. Sound Waves Un-notes: How does sound travel?

Have the students touch their vocal cords and speak in a high pitch and a low pitch.  Ask, "Do you feel the vibrations?  Do you feel any difference in vibrations between high and low pitches?"

Then, ask a group of about 6 - 9 students to come up to the front of the classroom to help model how sound is produced.  Have three students stand in front of you, spaced about 3 feet apart.  Explain to the class that the students will be air molecules and you are going to act as if you are a vocal cord vibrating.  Explain that vibrating is a back and forth motion and that you will be moving, or vibrating, as if the vocal cord is in slow motion.

Tell the 3 students standing in front of you that you are going to move forward, "running into" the first person.  Move forward and "push" the first student so that student naturally moves into the next students.  Then, stop the three students there and say, "Notice that they all compressed together."  Ask the students, "if you were bumped like this, would you immediately stop?  Or would you keep moving?  Which direction would you go?"..  Students typically say, "We would keep moving in this direction."  Say, "Oh, I see, you would go in the same direction as the disturbance, this must be a longitudinal wave!"  Pause the students' movement.

"A vibration is a back and forth movement.  I moved forward, now I need to move back."  (Step back a few feet.)

"What would gas molecules in the surrounding area do if those other molecules got compressed together?"  Students would respond, "Fill the space."

"Oh, I see.  When I step back, these other gas molecules (3 other students) would fill in."  (Again have them stand a few feet apart.  Make sure the "compressed" students are still compressed.)

Bring up about 12 total students and model the process again without all of the starting and stopping.  Each group of three student "compression" should be directed to keep moving forward without stopping and each time that you step back, three new students should fill the vacancy.

Check out this video of the students acting out this model:

Then, draw a picture of a speaker on the board of a speaker with sound coming from it.  Ask students if they have ever seen a cartoon picture with these lines coming from the source of the sound.  I always say, "I love it when cartoons draw these curved lines coming from a sound because I know it is founded in science.  These are actually representing longitudinal sound waves.  Each of these lines is a compression caused by a vibration!"

Explain how a speaker works.  Below is the explanation provided on the student un-notes sheet.

After watching the video, ask the students to answer the question on the un-notes and then discuss as a class any evidence they saw that sound is a mechanical wave and that sound causes molecules to compress.

Ask the students to fill out the section of the un-notes and share those answers as a class.

Then, I say, “Now that we know that sound travels through matter, it is important that we understand that waves travel differently through different types of matter.”

Provide each lab table with three zip lock bags, one filled with sand, one filled with water, and one filled with air (blow it up like a balloon).  When making the bags, fill them half way and then squeeze all of the air out of them before sealing them.  Have the students place the bags on the table, put their ear on the bag, plug their other ear, and have another student tap their pencil a short distance away on the table and take note in the differences in sound.  Then, have them complete the section on the un-notes and discuss as a class.  The key idea here is that the denser the medium, the faster the wave can travel through because the molecules are closer together so they can compress more quickly. 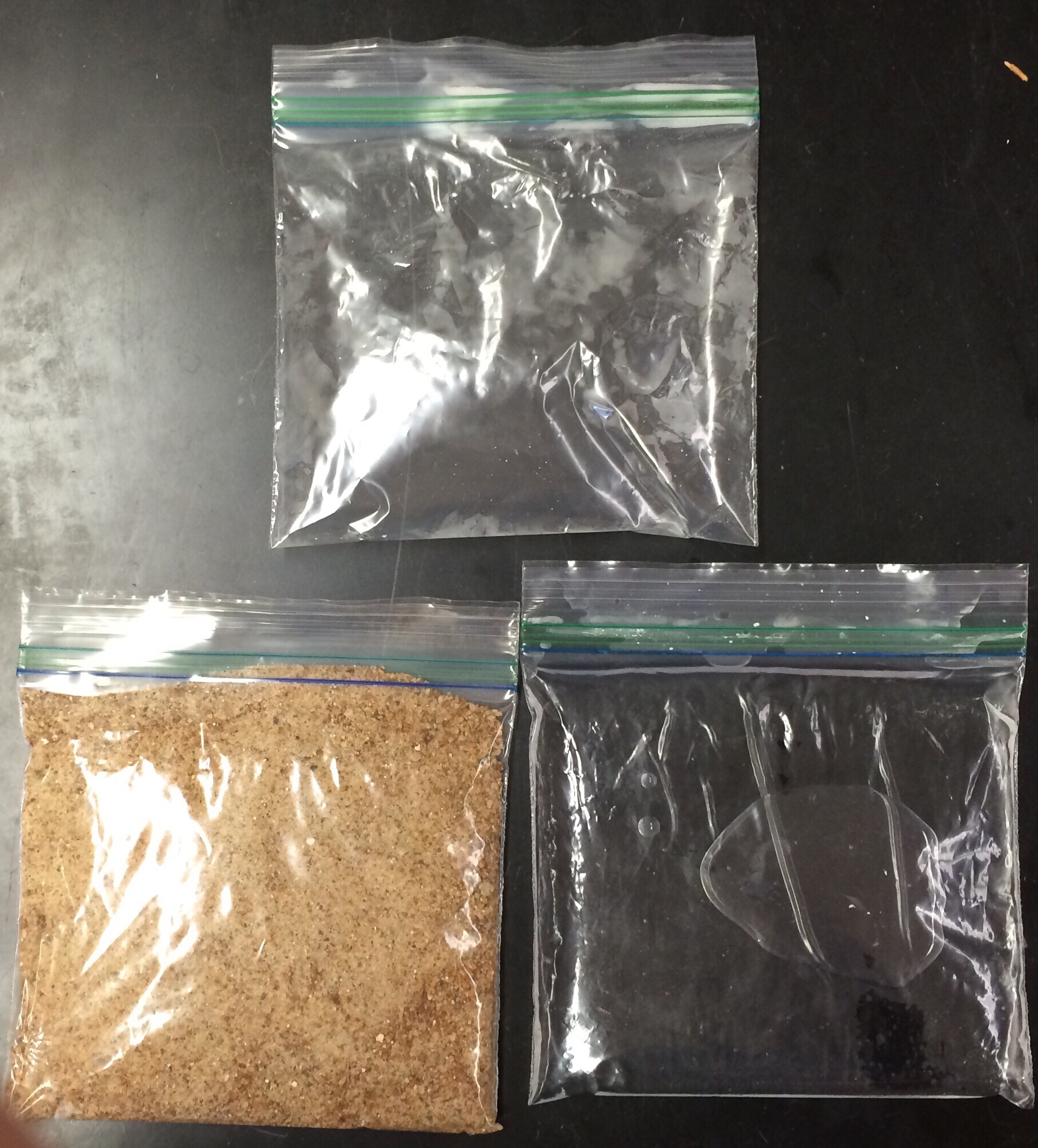 Bags of Air, Sand, and Water

Have them complete the “Flashlight and Thermometer” demonstration by recording the starting temperature of a thermometer, placing a flashlight close to the tip of the thermometer, and then recording the temperature after a minute or so.  As they wait, ask students to predict what will happen.  Record the final temperature in the data table.  Say, “One difference between light and sound waves is that when light waves are absorbed by matter is that they transform into thermal energy.”

Say, “The path that light travels can be traced as straight lines except at the surfaces between different transparent materials where the light path bends.  This is called refraction.  Refraction – the bending of a wave as it enters a new transparent medium at an angle.  Refraction occurs because waves travel at different speeds in different mediums.” 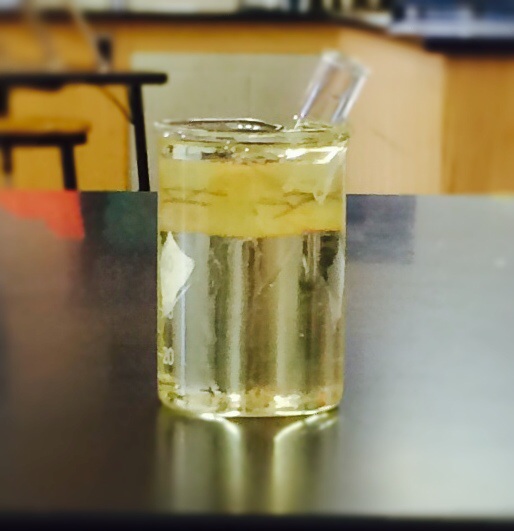 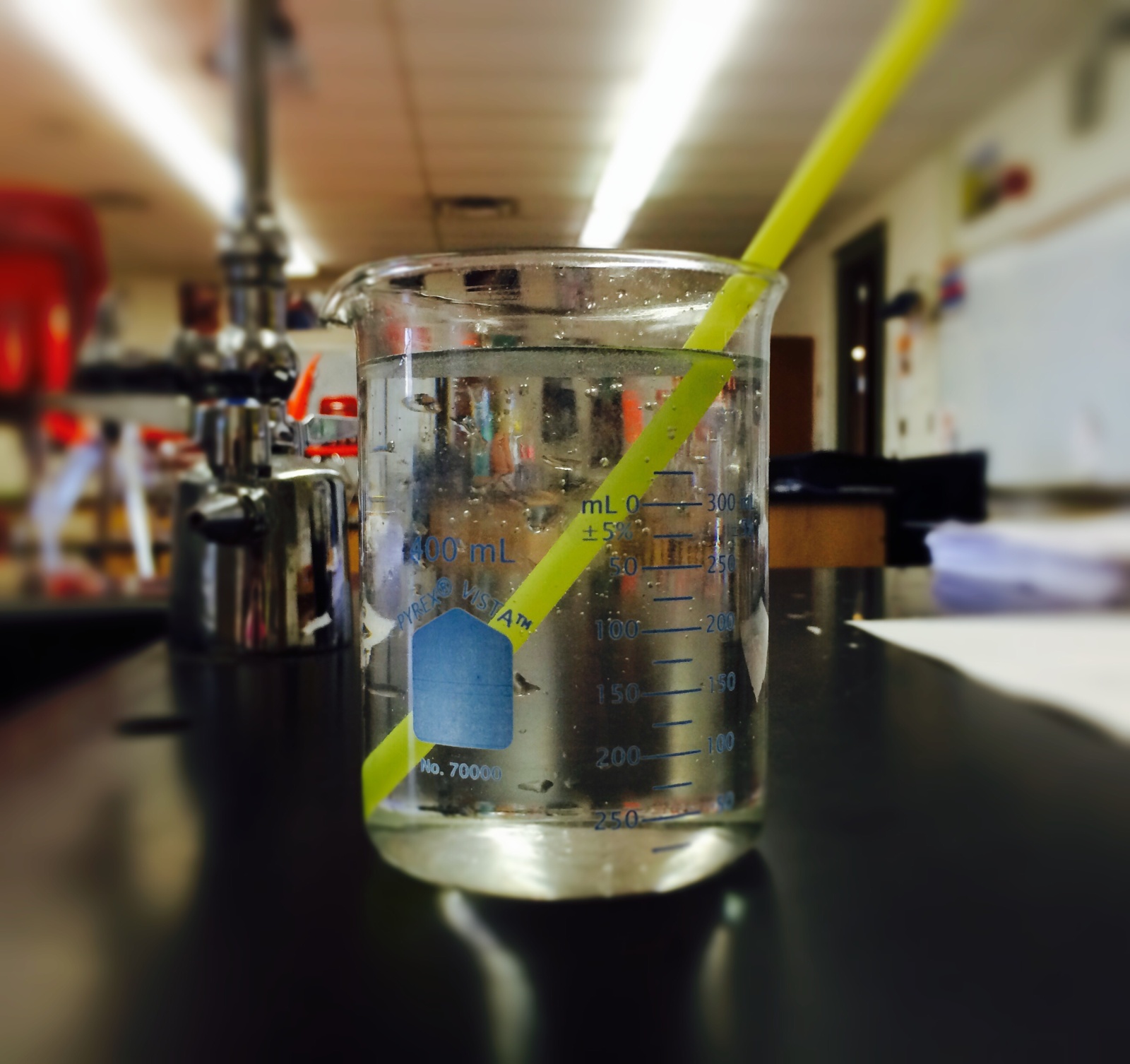 Discuss each of these demonstrations as a class.  For the Beaker and a Straw: Refraction demonstration, students should notice that the straw appears to split into two parts because light is bending, or refracting, as it travels through various transparent material including air, glass and water.  For the Disappearing Test Tube: Is there bending light? demonstration, the students should come to the realization that we cannot see the test tube because the light is not bending.  In this case, the light is moving through the beaker and the vegetable oil at the same speed and therefore refraction is not occurring.  Coming to this realization is much more challenging and sometime requires class discussion to get to.

**Teacher Tip for the Disappearing Test Tube:  If you try this and it does not look as if it disappears, try it with a different beaker and/or test tube.  This works when the two pieces of glassware allow light to pass through at the same speed.  As each piece of glassware is a little bit different in thickness/composition, it may take you a couple tries to get the right combination of glassware to use.