Students will be able to engage in scientific discourse about characteristic properties of waves (refraction) to design a solution to a problem.

Students use text to engage in scientific discourse and then use their knowledge of refraction to design a telescope!
Lesson Author

This lesson represents the 2nd day of designing refracting telescopes (Check out Day 1's Lesson!). Depending on where your students are in terms of their engineering/experimental process and writing development, this lesson could extend to a third day.

The Building Refracting Telescope lesson is designed to provide students an opportunity to investigate and learn about different ways that waves can be used in the real world. This investigation also requires students to use mathematical and computational thinking to evaluate wave properties.  Specifically, this lesson connects to the following NGSS and Common Core Standards:

MS-PS-4-2  Develop and use a model to describe that waves are reflected, absorbed, or transmitted through various materials.

CCSS.ELA-LITERACY.RST.6-8.10  By the end of grade 8, read and comprehend science/technical texts in the grades 6-8 text complexity band independently and proficiently.

Disciplinary Core Idea PS4.B states that one idea important for students is that the path that light travels can be traced as straight line, except at surfaces between different transparent materials.  In order to demonstrate this, students will experiment with various thicknesses of convex lenses to calculate focal points of telescope lenses.  This again allows students to utilize mathematical and computational thinking to evaluate the properties of waves (SP5).

Connecting to the Essential Question: What am I going to be learning today?

Ask students, “What are you going to learn today?”  Students should respond by stating something connected to the NGSS Essential Question (I keep this posted on my front board.).  Thus, students might say, “We need to answer the question, what are the characteristic properties of waves and how can they be used in the world?”

Ask the students to take a moment and add anything new to the light bulb they have been filling out over the past days that seems pertinent about what they read or learned about telescopes the day before.  (The light bulb is a graphic organizer students have been fusing to organize examples and evidence of specific skills for the waves unit.  For a look at the skills students are working on, check out the Waves Unit Plan.  Students track their level of mastery on each skill throughout the unit.)

Then, as a class, allow students to share the new ideas they added and encourage other students to add to their light bulb if a student shares something that they do not already have. 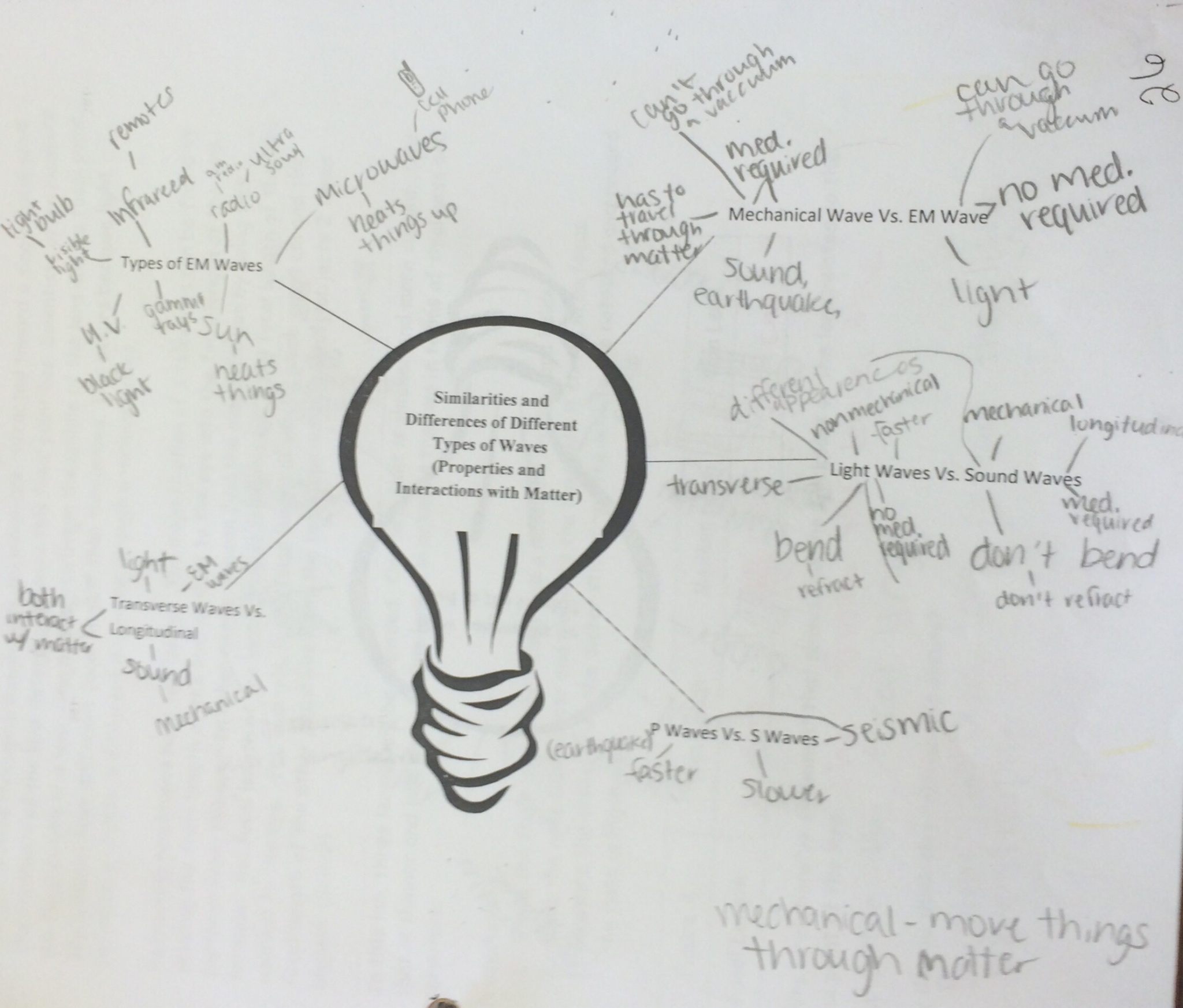 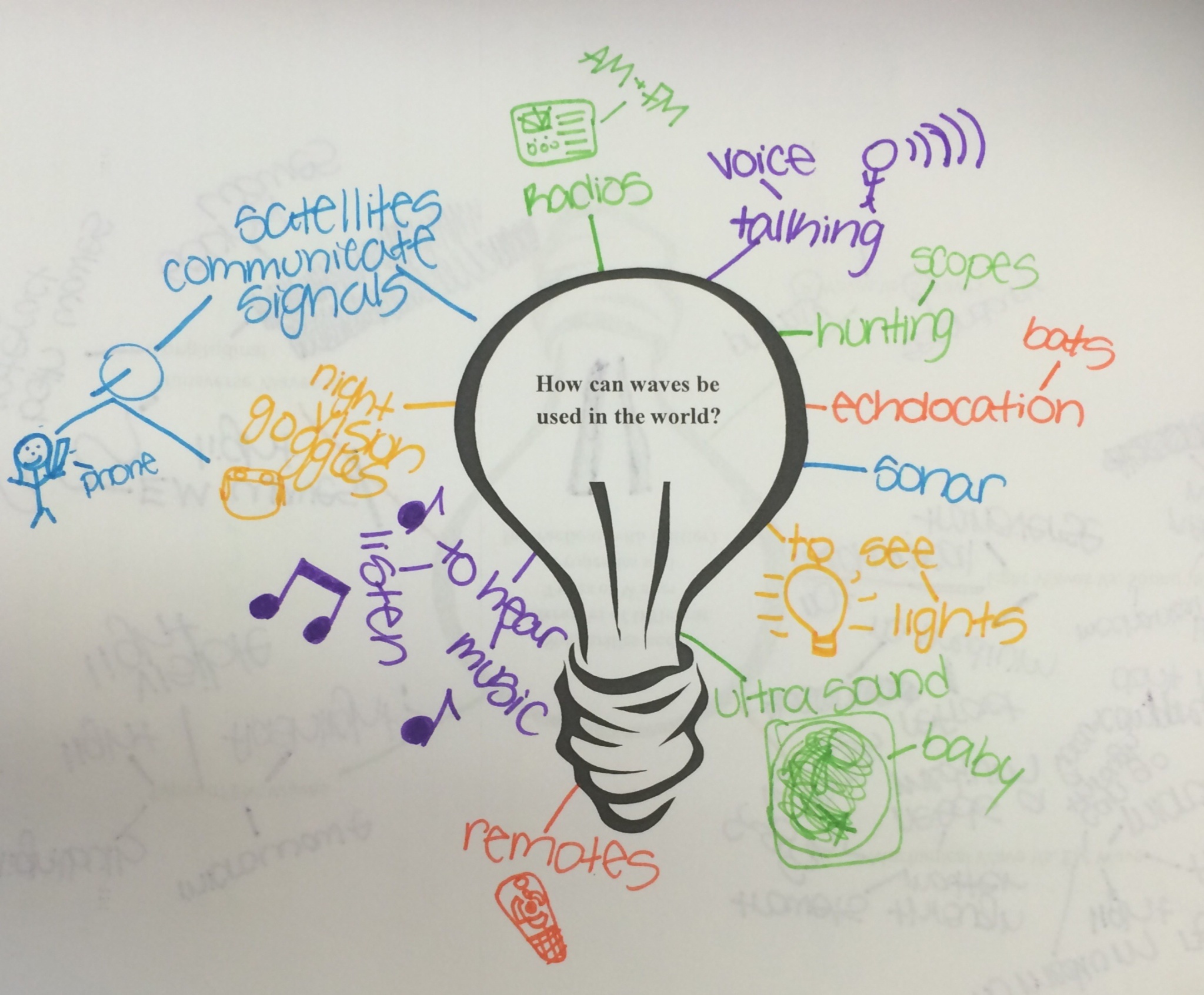 Let the students know that they are going to continue designing telescopes and that once they have developed the most effective refracting telescope that they will be writing an ABCDE* paragraph explaining why their final design was the most effective compared to other designs tried.  I remind students that when we communicate, our goal is to “sound like a scientist, not like a 7th grader”.  I remind them that they are a professional scientist and engineer writing to their client and that their writing should reflect that.

*(For an explanation of the ABCDE writing format, check out this lesson.)

In order to review some elements of scientific writing, I provide each table with four examples of student writing and ask them to put them in order from “sounds like a 7th grader" to "sounds like a scientist” and identify their reasoning for their choices.  After allowing the students time to order the writing, ask groups to share which of the texts sounded most like a 7th grader and why.  Repeat this process for each of the student writing pieces.  For more insight into using this strategy and why it works, check out the reflection for this section (It includes resources as well!).

Below are the student writing pieces and the components students typically share about each piece.

This student sample is ordered in the middle of the other two student samples.  Students typically note that their peer cited text and discusses that rubber bands add elastic potential energy.  However, this piece of writing did not refer to specific data.  To prove a point, the writing should compare two data points.  Lastly, students should notice that this piece of writing should use more transitions to improve the flow of the paragraph.

This student sample is labeled as sounding ‘most like a 7th grader’.  Students notice that the piece does not use appropriate vocabulary as words such as “my” and “it” were used.  They mention that the writing gives data but does not give the data in a complete sentence.  In addition, the writing did not reference a text or a science term/concept that causes the difference in distances.  Furthermore, the sentence, “The more rubber bands the more the distance” is not only a fragment, it also does not explain the scientific reason for why the catapult with three rubber bands traveled the farthest distance.  Last, students note that the writing should not state “works the best” in the conclusion sentence, but should say, “traveled the farthest distance” instead.

As the amount of rubber bands used on a catapult increases, the distance a ball launched from the catapult increases.  In the lab, the students created a catapult, or trebuchet, with either 1, 2, or 3 rubber bands connected to the arm and measured which could launch the farthest distance.  According to “Forms of Energy”, elastic potential energy is stored in an object when an object changes shape.  In addition, energy that is stored in an object can transform into kinetic energy.  According to Figure A, the catapult with 1 rubber band launched a ball 5 feet while a catapult with 3 rubber bands attached launched a ball 30 ft.  This occurred because as the number of rubber bands increased, the amount of elastic potential energy stored increased.  When more rubber bands changed shape, more stored energy transferred into the ball as kinetic energy.

This sample is ordered as “sounding most like a scientist”.  Students note the strong vocabulary used, the citation of text, the comparing of two data points/referencing a data table, the use of transitions, and a clear explanation of why the catapult with three rubber bands traveled the farthest distance. 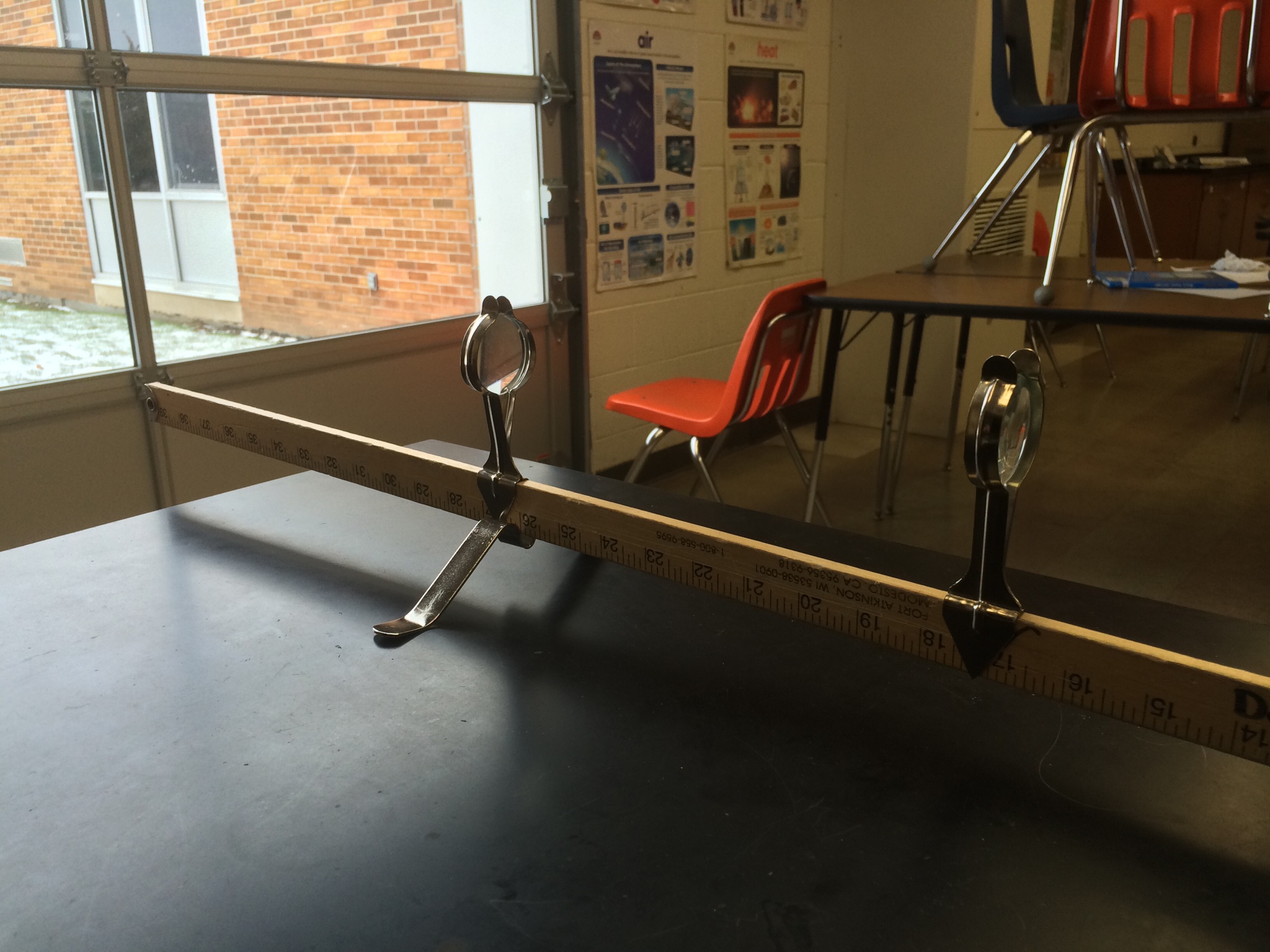 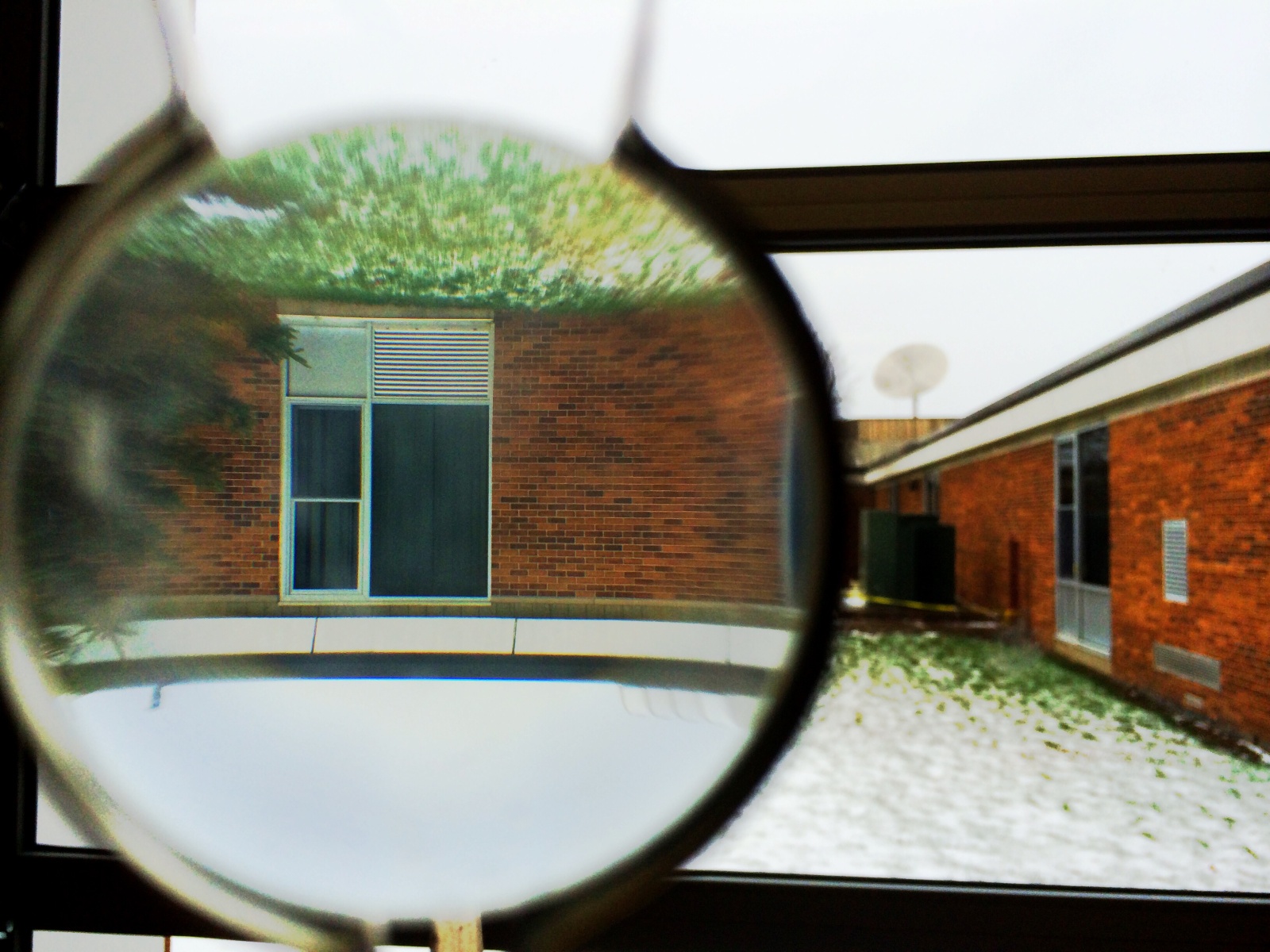 Let students know that they will continue experimenting with their refracting telescope designs from the previous day.  Remind the students that they need to be taking both quantitative and qualitative data as they test.  Explain that scientists and engineers often create data tables to record their data as they test and experiment.  Encourage them to do the same. (Refer to the Refracting Telescopes Day 1 lesson for more information.)  Explain to students that when they have identified the best design that they should begin writing their ABCDE response.

Students work in groups to plan their first design.  Groups should engage in discussion with each other to make sure they design their telescope based on scientific reasoning.  Below is a video I captured of a group determining how to design their telescope. Notice that the students are touching the text to show where they are getting their ideas.  Students that refer back to the text prior to designing are the most successful.

The next clip is the moments following the clip above.  Group discourse is so important for real learning here.  Notice that the girls offer suggestions and how others listen and are willing to offer varying viewpoints.  Students are also open to feedback. One girl begins by saying, "Correct me if I am wrong" to indicate she welcomes feedback to her opinion.

As students work, engage in conversations with each group about their process.  Here are some questions you could ask:

At this point in the year, I expect students to independently create a hypothesis, a procedure, and a data table without my direction.  However, there will be groups that just start randomly putting lenses on the meter sticks.  This lab provides many teachable moments on experimental design and the design process.

Once groups have created a successful design, engage in more discussion with them.  You might ask:

It is very important thing that students are asked to take part in scientific discourse.  So much can be learned by explaining your own learning and answering application questions verbally.  Two things happen when students are asked to answer "thinking" questions verbally.  One, students say what first comes to their mind and as a result they often say their misconceptions.   Two, as they say a misconception, they often catch themselves and change their answer to show that they have corrected that misconception.  Either way, the student and you both leave the conversation know what misconceptions exist. Below are a couple of videos that show students answering the question, "If I wanted my students to create more powerful telescopes during this lab, what could I buy or get that could help increase magnification?"

In this first video, the first and last student who speak have great ideas.  They recognize that by changing the thickness/curve of the lens that the refraction and magnification might change.  However, after this conversation I discuss with them about how when they make a claim, that they should back it up with evidence or scientific reasoning.  The second student in this video does this.  He references focal point and describes how magnification can be calculated.

In this next video, the second student speaking is challenging himself to use strong science vocabulary.  To do this, he begins to use the word "amplitude".  The more he uses it, he realizes that is the incorrect word and then alters his speaking.  I find that as students speak and answer questions it is best not to interrupt them and fix their word choice or misunderstandings as they go.  So often, by "talking through it", they realize their mistakes and correct on their own.  After they are through with their thoughts, you can talk to them about their word choice and misconceptions.  Moreover, interrupting them can make it seem as if you are not valuing their efforts.  This student is going for it; he is putting himself out their and taking a chance at discourse - he needs to be celebrated!

In this video, I take a look at some student ABCDE paragraphs for this telescope lab.  I provide a brief summary of what an ABCDE paragraph is and talk about some common challenges that students face in this writing.  In addition, there is a "Quick Guide to the ABCDE Paragraph" resource that can help you teach this format to your students.

Engineers frequently use data and designs from other engineers to give them insight into their own designs and improvements they could make.  I often give the example that there are probably a group of engineers working for Android that are testing iPhones for its strengths and weaknesses and using that data to make improvements to Android devices.

Ask each group to find another group and share the design and data that they found to be the most effective.  And then, based on the conversations they have, I ask groups to consider if they would make any changes to their own designs if they were given more time.