SWBAT explain how physical properties at the macroscale can be used to compare the strength of intermolecular forces at the nanoscale.

One of the struggles of every teacher is providing high quality plans for when we have to be out.  It has to be simple enough for any substitute to execute, but not interrupt the flow of the unit or the lesson.

Often, I fall back on the pet movie for the unit as my plans for the day.  We rely on the old World of Chemistry videos in my school.  When there is a spate of illness, they get supplemented with Mythbusters, or depending on the time of year, Forgotten Genius about Dr. Percy Julian.  So the challenge is, how can I have the sub show a video that is meaningful to my students, or how can they view one themselves?

A few years ago I was introduced to Authorstream.  This site takes a PowerPoint with narrations and animates it into a linkable video.  This time, since I wasn't feeling well the night before, I was able to narrate my notes at home, load the video, place the link on my SchoolFusion page, and have the sub play the video for my students.  Additionally, it is on the page for any students who were absent.  This tool is useful for flipping the classroom as well.

Today's lesson moves beyond state changes within a single substance, to comparing various substances based upon their bulk properties.  As such, it is strongly rooted in HS-PS1-3: Plan and conduct an investigation to gather evidence to compare the structure of substances at the bulk scale to infer the strength of electrical forces between particles.

Students will also be planning for one of the two upcoming lab investigations. (Science Practice 3).  Since I switch chemistry rooms repeatedly in the course of the day, two sections that meet in the same classroom will prep for the Evaporation of Alcohols lab, while the two sections that meet in the other classroom will prep for the Surface Tension and Viscosity Lab.  The classes will each do both labs, but on different days to make management of the labs easier.

At the start of the period, I ask my substitute teacher to instruct students they will be taking notes, and I leave the instructions on how to turn on the projector and sound for the classroom.  With the instructions is a go-to student in case the teacher cannot locate the link on my SchoolFusion page.

I ask the teacher to inform the class to let her/him know if they need the video paused at any point.

According to my substitutes for this day, the students were very disappointed to learn that they would be taking notes in my absence.  They were more surprised to find that I was still delivering the notes via the narrations.

Once the students are ready, I have the substitute project the PowerPoint video and hit play.

The notes begin with a reminder of the strength of attractive forces in the various states of matter, as determined by the distance between particles.

I then continue, walking students through three examples: methane, chloroform and ammonia.  We adhered strictly to the assessment boundaries on HS-PS1-3, which states that students do not need to know the names of the intermolecular attractions.  Therefore, the discussion is very surface about their attractions, without information on polarity or Van der Waals forces.

We then define boiling point, using a graphic that appears on the unit test.  If I were in class, we would use the vacuum pump and bell jar to boil ethanol by decreasing the pressure inside the jar.  This is a very effective demonstration to show that the boiling point is dependent on both the temperature and the pressure around the liquid.

Next we go further into vapor pressure, with a reminder that temperature is the AVERAGE kinetic energy of the sample.  Some molecules will have higher kinetic energy, and they will escape slowly and evaporate.  This is why we refer to a boiling point instead of an evaporation point when discussing the changes between gases and liquids.

The next slide is a summary of volatility, and the relationship between volatility and strength of intermolecular attractions.

For the final two slides, we shift focus to liquids, and discuss viscosity and then surface tension.  I spend less time on these, as students will be investigating them in lab in the coming week.

The next day, I found out that in three of the four classes, the sub was unable to show the clip.  I do not know why, as there were no explanations left, only student stories of "the struggle".  In the one class where it was shown as a whole class, the sub did not pause or replay sections at student request.

However, in two classes the students took the initiative to go onto the lab computers and watch the notes in pairs or groups of four.  Only one of these two classes figured out that the notes were narrated and also listened to the sound.

Student notes tended to simply be copies of the slides.  This was understandable given the implementation issues in each class.  For future use, I would be much more explicit with my sub plans to explain how to show the video and that there is narration for students to view.  If we were a 1 to 1 district I would have students watch on their own devices with headphones so they controlled the pace of the clip. 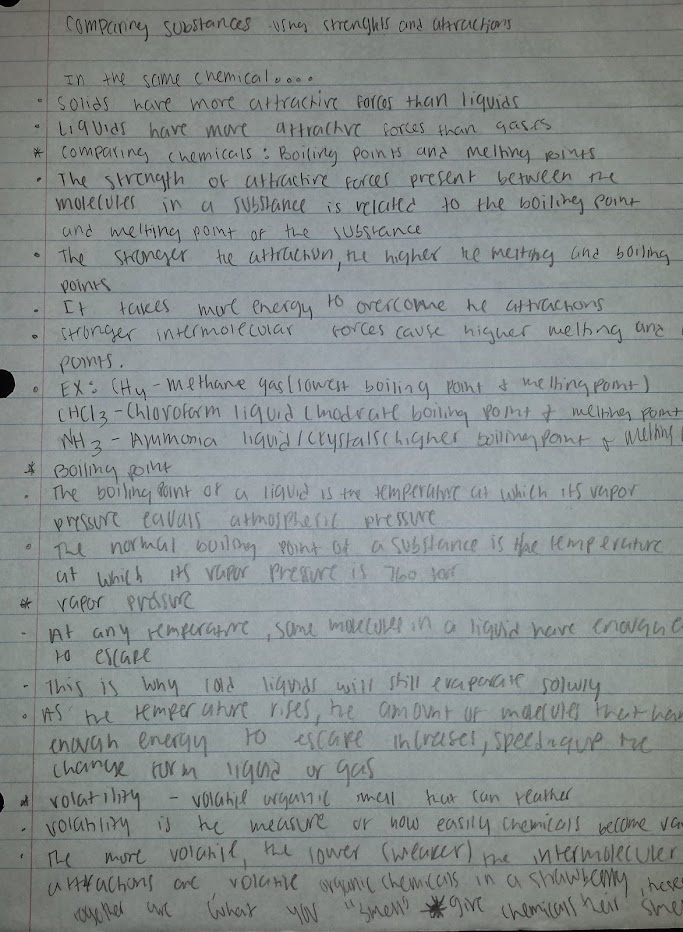 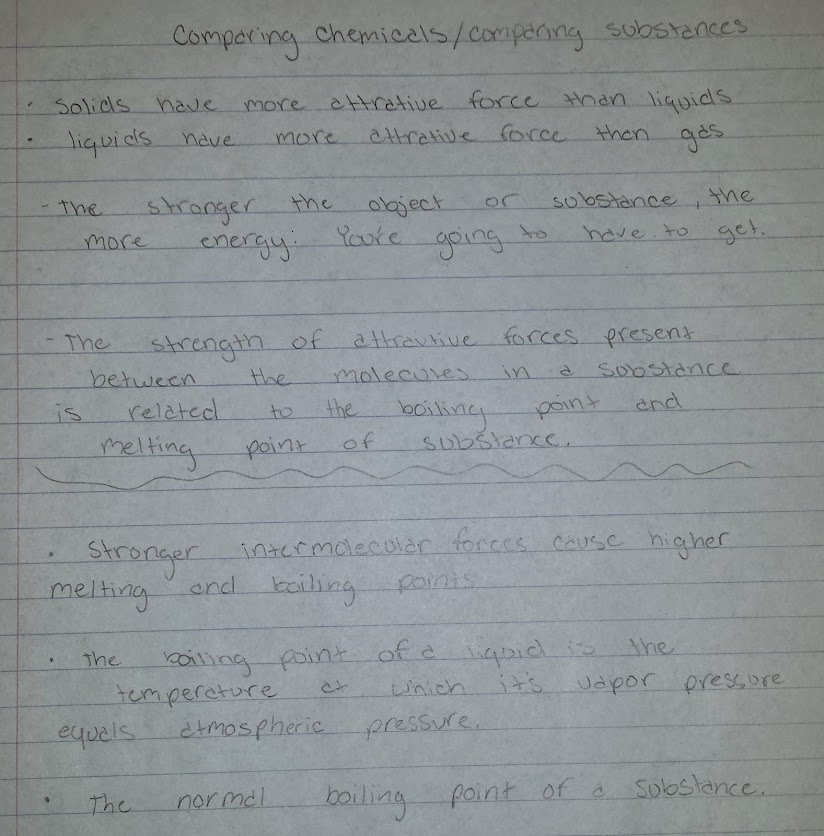 When the notes are complete, the sub is to pass out the appropriate lab procedure and pre-lab filmstrip to the students.

Depending on the need to pause the videos, students may have less than 20 minutes to work on their pre-lab work.  Students are given either the Evaporation of Alcohols lab or the Surface Tension and Viscosity lab, depending on the period and classroom.

Students then work with their lab partner to read the lab and complete their pre lab filmstrip. The filmstrip is a prep technique that has students adapt their numbered lab procedure to a script, and allows partners with different tasks to hone in on just their role.  Production of the filmstrip holds students accountable for reading the procedure prior to performing the experiment.

The Alcohols lab will be studying the intermolecular attractions of four different alcohols using the Vernier Temperature probes.  Students will split roles between computer expert and chemical expert.  Students select which role they have, and complete the filmstrip accordingly.  This student chose to handle the chemicals.  You can see some underlining and emphasis to help them focus on important aspects of the procedure. 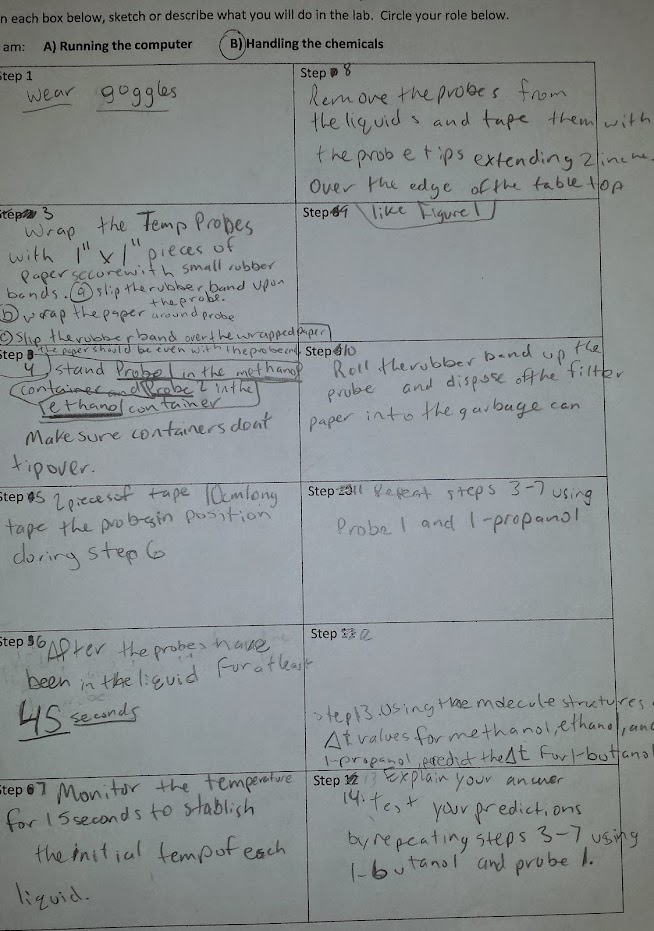 The Surface Tension and Viscosity lab is a strictly chemical lab.  In part 1 the students will be placing drops of different liquids onto a penny to test surface tension.  In part 2, students will have "liquid races" timing how quickly a drop flows down a whiteboard to test viscosity.  Although students will work together on both parts, they are encouraged to split the procedure on the filmstrip between themselves.

At the end of the period, students keep their filmstrips and bring them to lab the next day.  I will spot check the filmstrips prior to beginning the lab, both for completion and questions from students regarding the procedures.

Completion of the filmstrips was very spotty.  The students who have been focused all year had them done, and those who mastered looking busy for the sub did not.  Due to the extensive set up of the experiments and need to immediately take them down to switch classrooms, I allowed all students to participate the following day, regardless of filmstrip completion.