Students will begin to develop an intuition about electric circuits that feature batteries and light bulbs.

Timothy Brennan
Woodstock, VT
Grade Level
Ninth grade
Tenth grade
Eleventh grade
Twelfth grade
Subjects
Science
energy transfer (Physics)
Physical Science
electric potential
electric current
Standards
HS-PS3-1
Create a computational model to calculate the change in the energy of one component in a system when the change in energy of the other component(s) and energy flows in and out of the system are known.
HS-PS3-3
Design, build, and refine a device that works within given constraints to convert one form of energy into another form of energy.
SP2
Developing and using models
SP4
Analyzing and interpreting data
SP5
Using mathematics and computational thinking
SP8
Obtaining, evaluating, and communicating information

In today's lesson, we blend the learning goals of the previous unit with our new unit. Today, we spend some time with electrostatics demonstrations, take a quiz on the concepts of electrostatics, and allow time for students to explore electric circuits.

For some time now, students have been preparing simple, short demonstration of electrostatic phenomenon. In a previous class, they rehearsed their demonstrations and some students volunteered to show their demos today.

I have asked students to take on this task for a variety of reasons. First, one of my failings as a teacher is that I am terrible at demonstrations! Second, and more importantly, students both enjoy the process of finding and prepping a demo but also seem to internalize many of the fundamental concepts of charges while doing so. As a related note, the sense of fun and playfulness that accompanies this exercise goes a long way toward creating student ownership of the classroom.

For today's demo, these students have prepared their own "pith ball" - an object both lightweight and slightly metallic which will respond to small collections of charges. They took a small Styrofoam ball and rolled it in some liquid glue, then rolled it in some iron fillings. After it dried, they ran a paper clip through it and suspended it from a string. The pith ball responded to a charged rod, though there were some interesting observations - it appeared to rotate as much as it was drawn toward the pith ball. We could not be sure that this was an electrostatic effect or simply the string becoming slightly twisted. 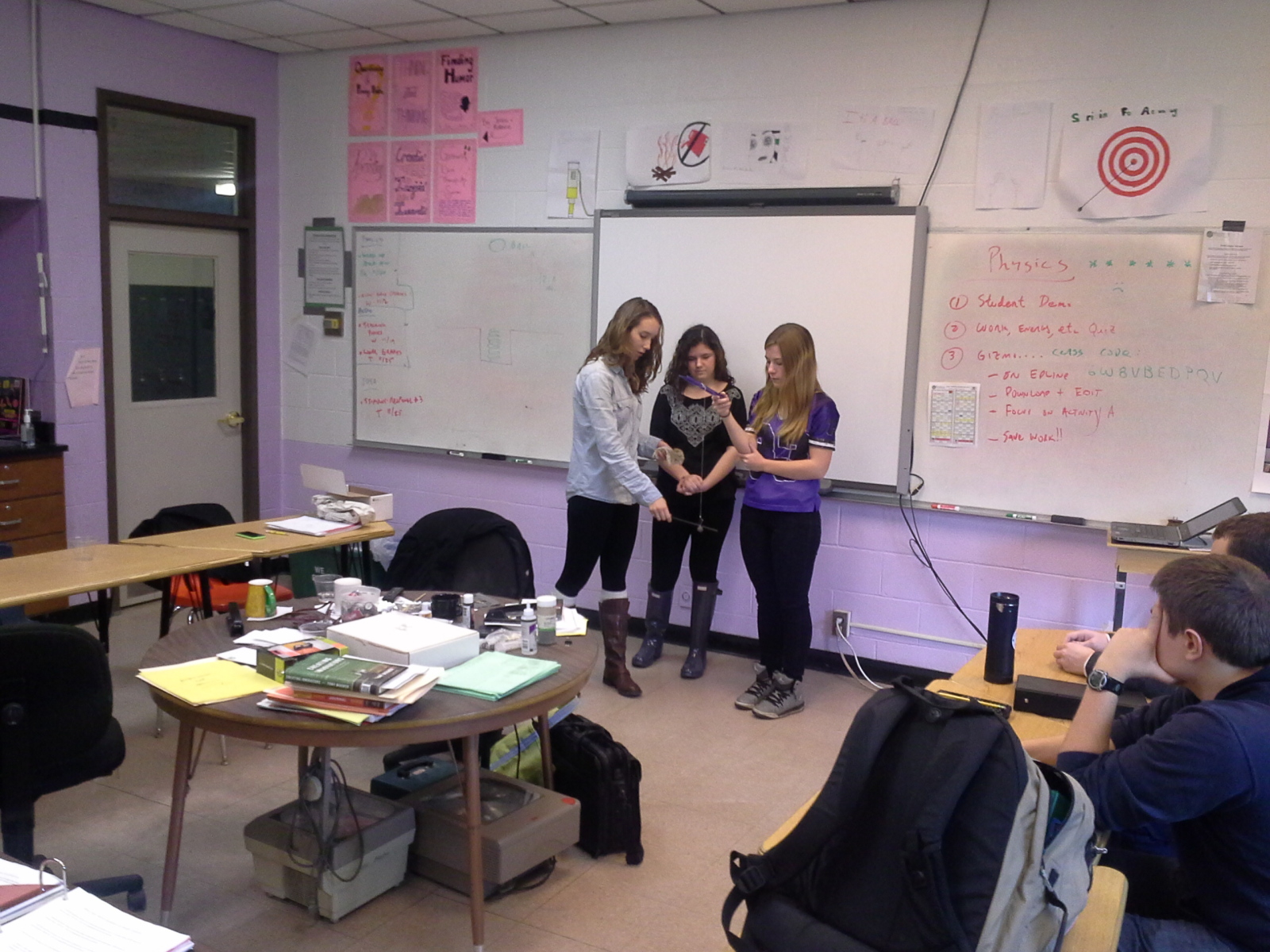 As with the previous demonstrations, I want my presenters to articulate the role that charged particles play in their demo. I want my student audience to appreciate the variety of ways that static charges can be witnessed and, to a limited extent, controlled or manipulated.

As a follow-up to last week's mock quiz, students today take the real quiz. In the interim, students have had electronic access to solutions to the mock quiz and the knowledge that the real quiz would be based on the mock quiz. In this way, I hope to have minimized anxiety about the scope of the test, supported my students in being active learners, promoted self-assessment, and demonstrated transparency.

A common problem with planning a test or a quiz is the problem of "timing." I like to give each student however much time he or she may need to finish but I don't want my early finishers to be idle for too long. My response to that dilemma today is to self-pace the remainder of the lesson. As students finish their quizzes, they are instructed to begin a self-guided exploration of electric circuits. The instructions are posted electronically (see next segment of lesson) and students can download electronic versions for their work today and for submission at a later date. While many of my students have their own computers or devices, I make a small number of netbook computers available for those who don't and I encourage collaboration between students.

Exploration of Circuit Fundamentals via Simulation

Over the course of the next few lessons, students will engage in a self-guided, self-paced exploration of simple DC circuits. If there's time today, students can begin that exploration.

We use a web-based simulator from ExploreLearning to pursue these goals. After a warmup section, students collect data and build their knowledge base on three important foundations of DC electronics: Ohm's law, Voltage Divider circuits, and Current Splitter circuits. Students follow a set of instructions that I have previously downloaded from the ExploreLearning website and modified to suit my needs.

My modifications turn the activity into a more data-centric activity than it was originally. For each of the primary sections, I have included data tables and prompts to arrange and analyze the data. By doing so, my students have additional opportunities to engage in the Eight Science & Engineering Practices of the NGSS, particularly Analyzing and Interpreting Data and Using Mathematics and Computational Thinking.

The instructions are posted electronically and students can download electronic versions for their work today and for submission at a later date. While many of my students have their own computers or devices, I make a small number of netbook computers available for those who don't and I encourage collaboration between students. Wherever students are at the end of this lesson, they are to save their work and continue in the next lesson.