Students will be able to read and understand the formula for photosynthesis.

A chemical equation is a model for a reaction that happens in real life.
Lesson Author

The purpose of this lesson is to help students be able to deconstruct and understand the photosynthesis equation.  I feel like it is really important to not just help the students understand the concepts but to be able to use the equation.  Later, when they might have forgotten exactly whether water is a reactant or a product, a look at the equation will spark their memory.

Major Strategies to Watch for:

1) Focus - I model my thinking about the equation.  I teach the equation like I would teach a reading.

2) Collaborative - Students use the equation to make a flow map of the steps of photosynthesis.

3) Independent - Students solidify their learning in a writing to think.

Learning Goal:  Understand how to read the photosynthesis chemical equation?

Opening Question:  What do you think this chemical equation means?

I ask students this question to find out where they are in understanding the chemical code in equations.  Sometimes students come in with a lot of prior knowledge.  My students today were totally baffled.  This means that I will need to do some concrete work on reading chemical formulas.

Students record their opening question on their learning goal sheet and are ready to start class 3 min after the bell has rung.  I reward students who get started early with ROCK STAR SCIENTIST tickets.

Follow the links to learn more about the beginning of class strategies and ROCK STAR scientist tickets.

The purpose of this section is to harness the students' interest in learning more.

Students in my school have not had any experience with chemical reactions yet.  I find it difficult that the first chemical reaction we are supposed to read and understand is photosynthesis.  I like to give them this experience just so they can have a tangible visible model before we continue.

I start this by asking them what they think this equation means.

This is a nice formative assessment as well, because you will get to see which students know some of the element symbols. After students guess, I tell them that a chemical equation is just a model for a chemical reaction.  It might look serious and complicated but it just stands for a reaction that happens.  Then I get out baking soda and vinegar and mix them together.  My students are so unsophisticated that this is AMAZING to them.  If you teach students with more background knowledge you might want to choose a different reaction like synthesizing water.

I show the students how each symbol stands for a chemical substance and how when we put them together a change occurs and we get new chemical substances.  Together, we remember the words reactant and product from the vocabulary the day before and we identify the reactants and the products in the lab.  I have the students write down the reaction in their notebooks, labeling the reactants and products.

The purpose of this section is to make visible my thinking about the chemical formula for photosynthesis.  When I'm finished, I want students to be able to recognize carbon, hydrogen, and oxygen, feel comfortable with the symbols and the words, and be able to recognize the reactants and the products.

I put this equation on the board and ask the kids to tell me what they notice.  Students write the equation in their notebooks and write down their observations and mine.

Then I walk through my thinking.  I go through the definitions of reactants and products and label those.  Then I look at the words and symbols and "remember things". I share with students the symbols for carbon, hydrogen, and oxygen.  I look at the numbers and think about what these must mean with our vocabulary word atom.

Here's how I walked through my thinking for students:

The purpose of this section is to practice adding up the atoms in the formula.  The reason I do this is to make the connection that we aren't creating matter...we are rearranging it.  For this activity we use mini whiteboards and dry erase markers that I keep in a crate at the front of the room for easy access.

I really enjoy being a class game show host.  This brightens the most serious lesson with some light-hearted fun.  Sometimes, I even get out my daughter's toy microphone and really have a blast. I've named today's game, Count the Atoms.

I tell students that they are all contestants in a new game called Count the Atoms.  I have them pick up a whiteboard for every pair of partners and a dry erase marker.  Before we play, I remind students about the meaning of atoms and molecules.

We start with the sugar molecule because it doesn't have a coefficient.  I ask the students to write down the number of carbon atoms in one molecule and hold their boards up.  It is very easy to tell immediately which student know the answer and which need some help.  Depending upon the answers I might stop and do a mini lesson or match students up to get some help from their peers.  Once I am confident we move on to hydrogen and oxygen.

Now, I teach them about the coefficient.  First, I ask them to guess how many oxygen atoms are in 6CO2.  They put their numbers down and generally most of them are wrong.  I use this opportunity to draw the CO2 molecule and then draw 6CO2.  Once they see this they get it right away and I remind them about the distributive property in math.

Then we go back to the game show and practice counting the atoms for the rest of the equation.

Below are some pictures of the student boards. 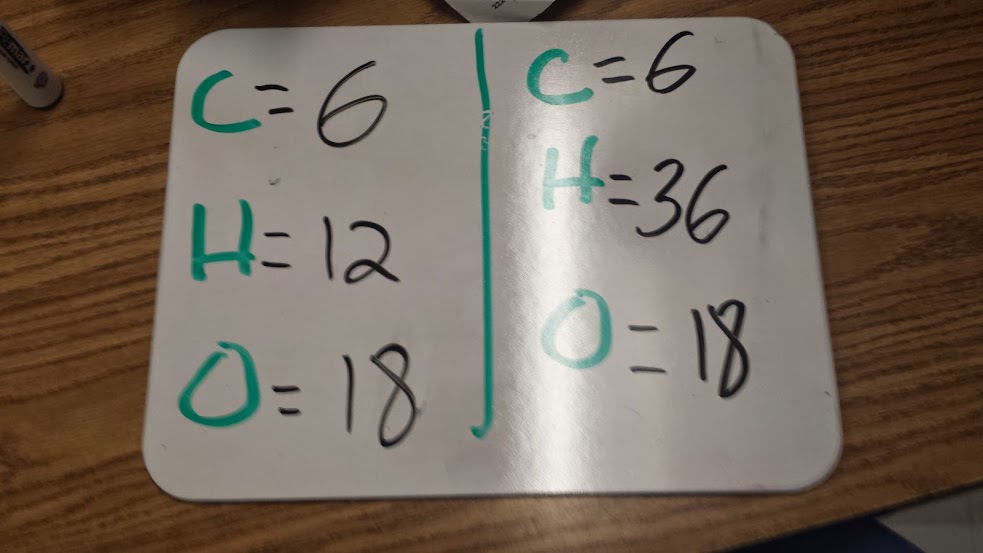 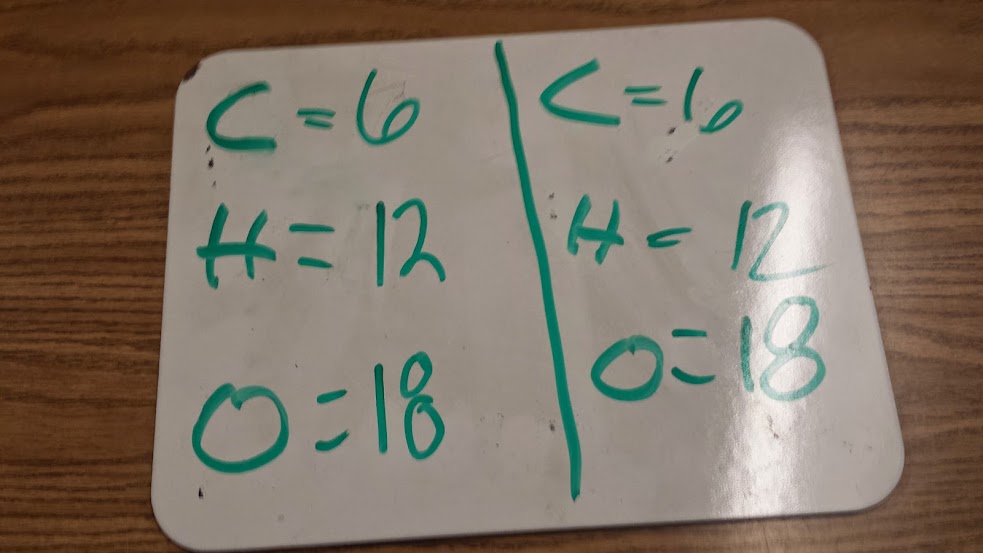 The purpose of this section is to give students a chance to collaboratively work together to read and understand the equation.

I start this section by teaching the students how to make a flow map. 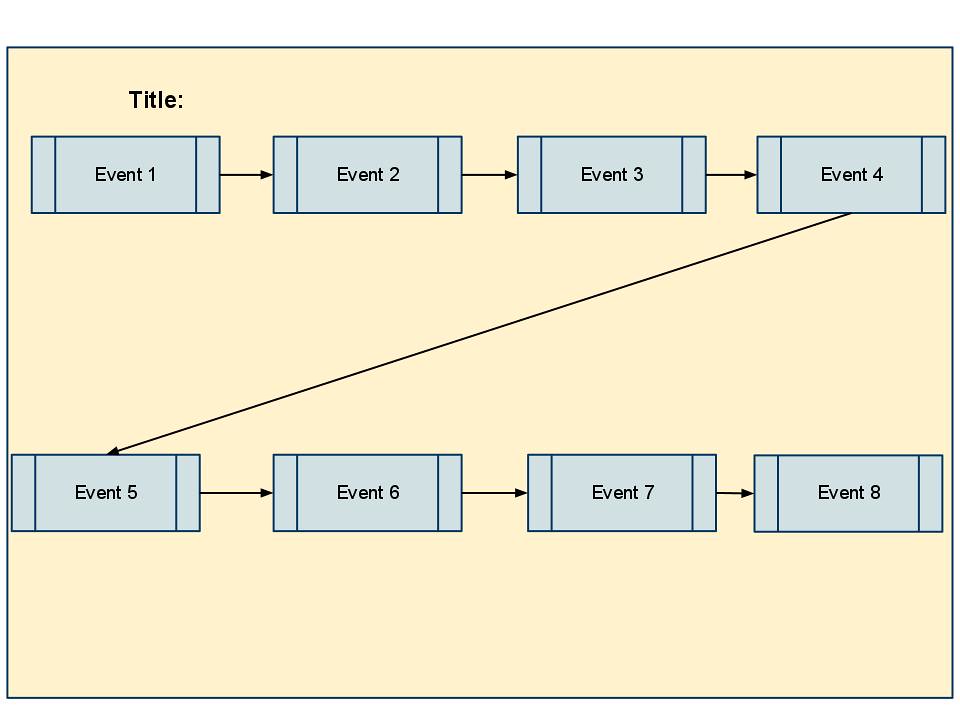 I demonstrate how to do a flow map by making a flow map of my morning.  I try to make this funny by throwing in comments like, and then my daughter had a tantrum, or then my son forgot his homework.

Once students understand I let them work together to make their flow maps in their notebooks.  If the finish quickly I encourage the students to add color and pictures to make their maps even better.  You can see an example of  student work here

The purpose of this section is to let students synthesize their learning in one place.

For this section, I have the students do a Write to Think.  This is a type of writing that I use often in class to let students solidify their thinking without being assessed on writing skills.  You can find this on the Literacy Framework attached to this section.

My rules for Write to Think are simple.  We write for four minutes, the students must write the entire time, if they run out of ideas they should just choose one of the important vocabulary words and rewrite it and its meaning to get started again.  Then I set the timer and the kids get going. I walk around to ensure that students use the entire time for writing and to monitor what they are writing.

I like to make special "Writing- to- think" notebooks for my students.  I simply take a colored piece of paper and staple it to 4-5 white sheets of paper.  This method allows me to keep all their work in one place and allows me to check on growth and thinking.

Closing Statement: "Today we looked at how to read the equation for photosynthesis.  Tomorrow, we are going to try to understand the main idea of photosynthesis."

Closing Question: "How do you think photosynthesis relates to you life?"

Closure depends greatly on timing and is not as easy to plan in advance as opening.  You can find more information about how I manage closure here. 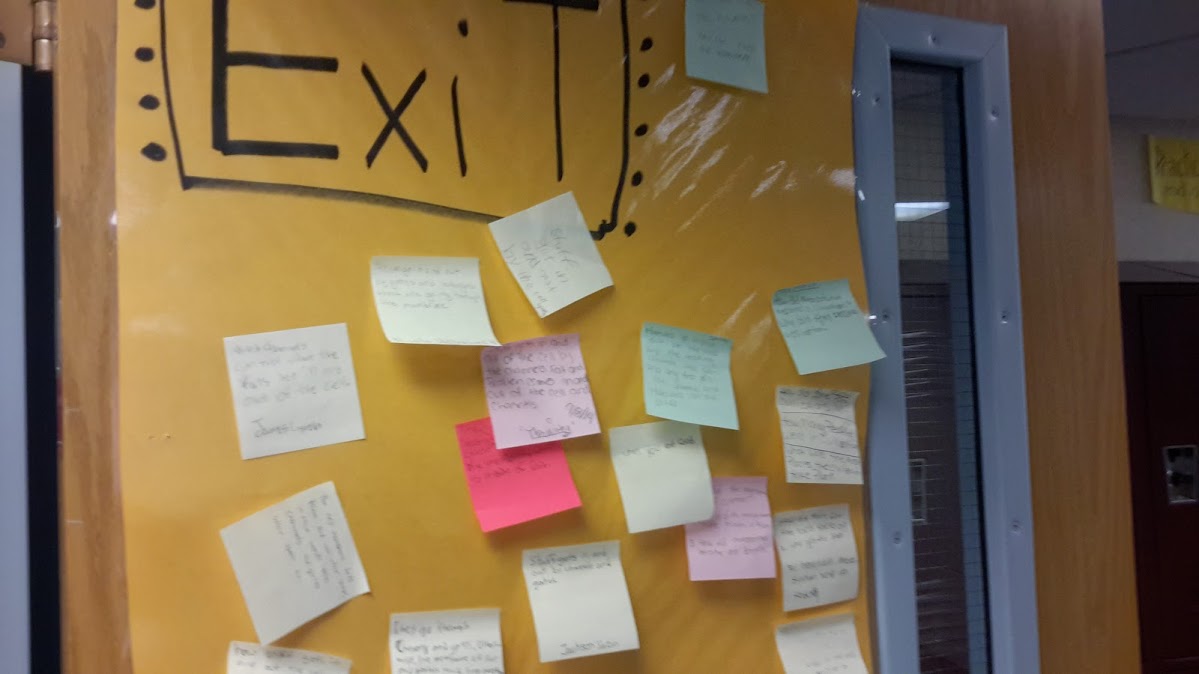