Can You Dig It?

SWBAT build a skeleton from discovered "fossilized" bones and use them to make inferences about the organism.

Dig it up, put it together and discover its story. Students put their archaeology skills to the test.
Lesson Author

Lori Knasiak
Lake In The Hills, IL
Grade Level
Eighth grade
Subjects
Science
ecosystem
ancestry
Evolution
Common Ancestors
Standards
MS-LS4-1
Analyze and interpret data for patterns in the fossil record that document the existence, diversity, extinction, and change of life forms throughout the history of life on Earth under the assumption that natural laws operate today as in the past.
MS-LS4-2
Apply scientific ideas to construct an explanation for the anatomical similarities and differences among modern organisms and between modern and fossil organisms to infer evolutionary relationships.
SP4
Analyzing and interpreting data

This lesson is adapted from this website and involves students uncovering fossilized bones, assembling the skeleton, inferring the appearance of the non-preserved tissues, and developing hypotheses on the behavior of the organism.

To begin this lesson I show students the following image and ask the to identify the organism (These are the bones of Lucy.  Check out this link to get some background info.)

Based on the layout of the bones, a student will guess chimp or human.  This video provides an example answer from a couple of students who claim these bones are from a primitive human.

The students who thought this was primate (though they said monkey - good time to distinguish between the two) cited the proportion of the skull and the longer arms as their evidence.

After some discussion on how most of the above bones were found in isolation and not all together, I show them this image that depicts the reconstructed skeleton with the missing pieces filled in with replicas. 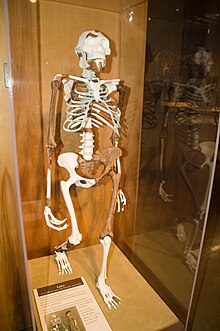 Finally I show students this image that depicts what they believe Lucy actually looked like.  As students view the image I ask them to think about how scientists determine the looks of an organism based on skeletal remains.

If you are looking to delve more deeply into the discovery of Lucy and how that helped fill in many gaps in human evolution, the PowerPoint I Love Lucy will take you there (forgive me for the name, I do many things to entertain myself).  This has all of the images from above but includes some links to videos that expand on Lucy and connect back to everything (literally every single thing) that we have learned within this unit.  The following video explains the PowerPoint in more detail.

I don't provide students with much information for this activity.  I want to recreate a fossil dig as closely as possible and archaeologists do not know where to look or how many bones are going to be found on the site.  All I tell students is that they are to work together to unearth the hidden fossil remains and assemble the recovered skeleton and take a picture, and finally analyze the remains to make some inferences.

I begin by having them determine a strategy to follow to ensure they are conducting a thorough investigation of their dig site and I question them throughout the lesson on how well that strategy seems to be working.  When needed, I prompt the students to alter or adapt their strategy (as for some students it is easier to keep doing what you're doing even if it is not working than it is to develop a new idea) but I do not tell them how to change their strategy.  This video has students explaining their strategies.

Once students have assembled the skeleton, they must take a photo they can reference as they work to create an illustration of what the body of the organism might look like if we could go back in time to see it (the external features, not the skeleton as they did in the lesson Making Inferences From Fossils).  The following images show some of the ideas students had on assembly. 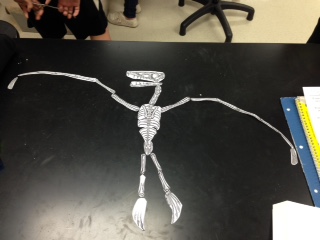 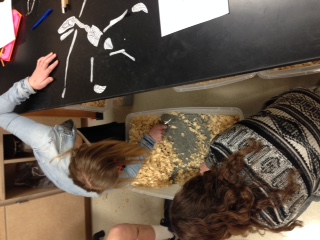 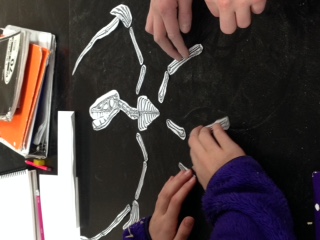 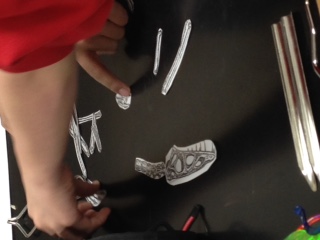 Students should then draw a colored sketch of their organism being sure to add fur, skin or scales as they see fit. This connects back to the question they answered during guided practice about dinosaur illustrations. Additionally, they must make 3-5 inferences about the organism and support those inferences with evidence from the skeleton, for example "organism is a predator due to the sharp, pointy teeth."

To help ensure students complete all requirements as they work at their own pace, I provide each student a copy of the Fossil Dig Checklist to keep track of their progress.  The Can You Dig It Final Product Examples provide an idea of what I want the final product to look like.  They represent the work of varied ability groups and really demonstrate the high quality and detail we have been working on throughout the year.

To conclude the lesson, students display their finished products so everyone can see the wide variety of interpretations that were created. At that time, I show students pictures of the mystery animal. In their science logs, I have students explain how it is possible to have so many interpretations of the same set of bones and compare how their interpretation relates to the formal pictures of archaeopteryx.

Getting Into the Fossil Record
7th Grade Science » Earth Science