SWBAT identify and describe the characteristics and interactions of air masses and fronts.

A useful lesson to introduce students to movement of large masses of air and how their interactions cause weather to change.
Lesson Author

Ryan Keser
Brookline, MA
Grade Level
Eighth grade
Subjects
Science
Weather and Atmospheric Science
meteorology
Standards
MS-ESS2-5
Collect data to provide evidence for how the motions and complex interactions of air masses results in changes in weather conditions.
SP3
Planning and carrying out investigations
XC-CE-MS-2
Cause and effect relationships may be used to predict phenomena in natural or designed systems.

In this activity adapted from Living By Chemistry Unit 3 Weather (© 2012 W. H. Freeman and Company/BFW) students identify the types of air masses over North America, where they originate, how they generally move along their characteristics including moisture and temperature.

Students will be able to:

This activity connects back to a lesson on convection and observations students made looking at a split demo tank.

Note: I use the same activity to kick off this lesson. This time though we are going to imagine that these are two fronts, a cold front (blue water) and a warm front (yellow water).

Air masses are bodies of air with uniform temperature, pressure, and humidity. It is movement of air masses that bring changes in weather.

There are four main air masses, and one additional type:

Science and Engineering Practices: Planning and Carrying Out Investigations

Planning and carrying out investigations in 6-8 builds on K-5 experiences and progresses to include investigations that use multiple variables and provide evidence to support explanations or solutions.

Cross Cutting Concept: Cause and Effect

ESS2.C: The Roles of Water in Earth's Surface Processes

Note: This same elicit is also used in an earlier lesson:

Begin with an empty tank in front of the class along with two smaller tubs (about a gallon each) of water, one cold blue and the other warm yellow water. If you have not used these tanks before they have a removable center divider that keeps the liquids separated until you are ready to mix them together. You can use hot/cold water or salted/unsalted water. 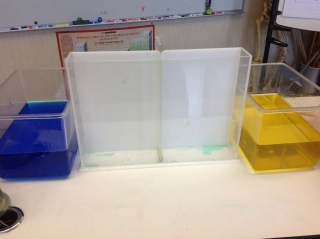 Fill one side of the tank with warm water and the other with cold water. There is no need to heat the water, just use the hottest water from the tap. In order to keep one color from leaking into the opposite chamber it is important to pour the two colored liquids in their separate chambers at the same time. The pressure from the two liquids will push against the center divider and prevent the colors from leaking until you pull out the divider.

Ask students to describe what they observe and to offer explanations for their observations.

Bring the class’s attention back to the apparatus when the warm and cold water samples have layered vertically.

Give each pair/group of students a copy of the weather maps handout. These images show fronts, cloud cover, precipitation, temperature, jet steam and pressure centers for a given day over North America.

Ask students to take some time to think over patterns and connections they see between maps. If you like, you could copy these on transparency paper, then cut them out and have students stack them on top of one another to see the relationship of one variable to the next.

As students discuss the maps and begin to make connections, move around the room listen in to student ideas. In the first view below, you can hear students work to make meaning of the relationship between the images.

In the next video, I ask some focusing questions to a pair of students to push their thinking.

Use the feedback you gather at this time to help you with the class discussion.

After a few minutes call the class back together and ask them to share their ideas aloud. When you finished,  show the following video to your class.

NOTE: Stop the video at 00:34. Do not show them the section on air masses yet.

Move on to defining a front. See my notes below.

A front is the transition zone between air masses with distinctly different properties.

The differences in density are most often caused by temperature differences. Separate air masses with different humidities as well. We identify fronts by the movement of this transition zone and the properties that move over a geographical location.

What weather changes do you expect when TV weather person says a cold front is moving through the area?

How do you identify a front on a surface weather map or by your own weather observations?

Project an image a the air masses that move over North America. Then ask the following questions:

After you have elicited your students' responses return to the remainder of the video and watch it to the end then define what an air mass is and the various types of air masses.

Air Mass is an extremely large body of air whose properties of temperature and moisture content (humidity), at any given altitude, are fairly similar in any horizontal direction.

Source Regions are simply geographic areas where an air mass originates. Should be:

The longer the air mass stays over its source region, the more likely it will acquire the properties of the surface below.

We can then make combinations of the above to describe various types of air masses.

Air masses in the U.S. include

cP -- wintertime bitter cold can extent to Southern US and even Florida causing crop damage. Require long, clear nights, which means strong radiational cooling of air near the surface. A stable air mass. Little moisture added so air is dry

mP -- Winter cP air moves over a region such as the NE Pacific, picking up some warmth and moisture from the warmer ocean. In the case of the Pacific NW mountains force the air to rise (orographic lifting) causing rain.

mT -- wintertime source for the SW US is the subtropical East Pacific Ocean. mT air that influences weather east of the Rocky Mountains comes from the Gulf of Mexico, but only influences winter weather in the SE states. Occasionally, slow moving weather systems in SW flow aloft can draw up moisture at mid and low levels producing precipitation.

cT -- Continental tropical air usually only influences the US in summertime as warm, dry air is pumped up off of the Mexican Plateau. It is usually fairly stable and dry, and if it becomes stagnant over the Midwest, results in a drought. Deaths associated with the 1995 heat wave in the Midwest were the result of cT and mT air, which stagnated over the central and eastern part of the US this last summer.

Air masses can control the weather for a relatively long time period: from a period of days, to months. Most weather occurs along the periphery of these air masses at boundaries called fronts.

In the first part of this activity students compared weather maps (fronts, cloud cover, precipitation, temperature).  They will need these again to complete the exercise worksheet. I've included an example of a completed worksheet below: 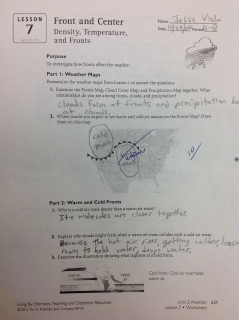 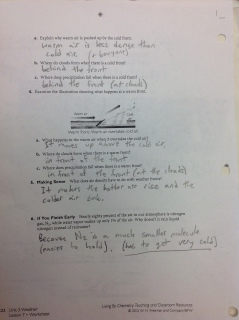 Note: You can easily prepare your own set of weather maps to look at from your region. Go to National Weather Service National Forecast Maps.  Select one each of the following maps for the same time frame:

Using the transparencies and handouts assist your students in processing what they had just learned.

Some sample guiding questions could be:

Use the base maps to review different weather concepts as well.

Draw a large warm front and a cold on a map of the United States front then ask students to infer where to place clouds and precipitation.

You could wrap up this lesson by asking the following scenario:

"A warm front is approaching your hometown. It is one day away. What would you expect to observe in the way of weather?"

Have students formulate an answer and leave it with you as an exit ticket or complete for homework.