Investigating Moisture in the Atmosphere

SWBAT explain and compare types of humidity, its relationship to dew point, the tools used to measure both, and how air temperature and humidity together impact human comfort.

Upon completion of this lab, the student should be able to:

Moisture in the atmosphere, in its myriad forms, is one of the most important variables that must be considered in the study of the meteorology. You will investigate water vapor in the atmosphere (humidity) and will attempt to apply your findings to circumstances found in everyday life.

Humidity is defined as the amount of water vapor in the atmosphere. It is measured in several ways.

In one method, the mass of the water vapor is measured per unit volume, usually a cubic meter (m3). This measure of humidity is referred to as absolute humidity and reported as grams H2O/m3.

The humidity may also be expressed as a mixing ratio. The mixing ratio represents the mass of water vapor in the atmosphere measured in grams per kilogram mass (g/kg) of dry air.

Specific humidity, yet another way to measure and report humidity, is essentially the same as the mixing ratio, differing only in that the sample mass of air includes the mass of H2O vapor contained within it.

While each of the methods just described to report humidity involve measuring the mass of H2O vapor within a sample unit of air, there is yet another way to measure the amount of water vapor in the atmosphere that utilizes a different approach. The concept of partial vapor pressure breaks out the amount of the total atmospheric pressure attributable solely to H2O vapor. For instance if the atmospheric pressure is 1000 millibars, and H2O vapor represents 3% of the mass of the air (which is manifested as air pressure) we could describe the amount of H2O vapor present by reporting the actual vapor pressure as 30 millibars.

A formula for finding relative humidity is:

I begin this lesson using the probe Where Did the Water Come From from Uncovering Student Ideas in Science (Volume 3) - Another 25 Formative Assessment Probes by Page Keeley, Francis Eberle, and Chad Dorsey (2008).

In it students work to recognize that condensation comes from water vapor in the air.

Where Did the Water Come From

After students complete the probe have them share out their ideas.

You may want to have a cold unopened can of soda sitting out in front of students so that they can see the condensation form on the out side. Also have an unopened room temperature can for comparison.

Ask them to explain where the water on the outside comes from. They should have some ideas about water vapor in the air.

Ask them to describe how the air around them feels on a clear, cool day versus an overcast rainy day. Depending on where you live the local weather may help you here. I live in the Northeast where weather changes are frequent and dramatic at times so have lots of opportunity to relate our learning to the atmosphere around us.

Since this lab involves a lot of data collection, measurements, calculations and use of data tables, I have found that that it is important to take the time to show students how to use the sling psychrometers, make the calculations, and use both the RH and Dew point tables.

Be careful that you don't just go through the motion in this lab. Even my brightest 8th graders struggle with these concepts.

NOTE: Care must be taken with these instruments, as they are very fragile and easily damaged.

20 minutes
Struggling to get it

Expect your students to struggle a bit this lesson. There are quite a few moving parts (literally and figuratively) so give yourself a couple of days to explore the content if you can.

The calculations and graphing are important skill builders so be sure to emphasize the importance of using correct unit and labels.

Note: In the second image below you will notice that my students added an additional column to the data table titled NODE. This was data we collected using the NODE+clima sensor. These are handheld wireless sensors that are easy to use and cost about $100 each. The Clima and other add on sensors are additional.

There is more information about the NODE and other available sensors on the Vernier website. 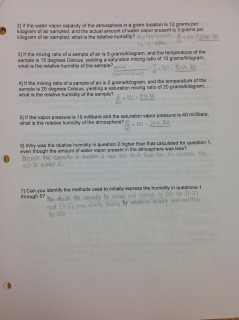 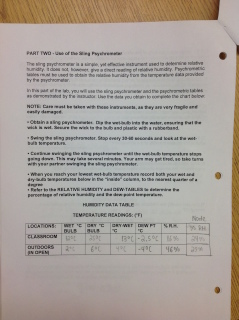 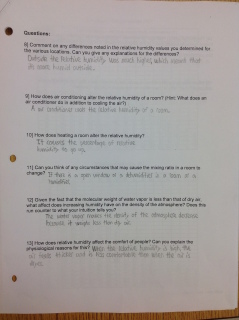 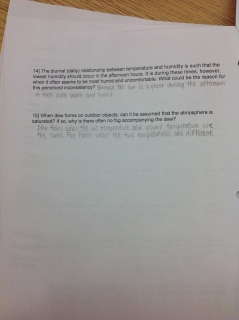 Here are some additional questions to extend student thinking