Enhancing Our Model of Work - Revisited

Students will implement methods, developed in a previous class, that will minimize the errors in approximating work done to two charges.

Adjusting our computational model of work in light of new shared ideas is a great science practice!
Lesson Author

Timothy Brennan
Woodstock, VT
Grade Level
Ninth grade
Tenth grade
Eleventh grade
Twelfth grade
Subjects
Science
electric potential
Physical Science
charged particles
electrical field
Forces (Constructions)
Standards
MP4
Model with mathematics.
MP8
Look for and express regularity in repeated reasoning.
HS-PS2-4
Use mathematical representations of Newton's Law of Gravitation and Coulomb's Law to describe and predict the gravitational and electrostatic forces between objects.
HS-PS3-1
Create a computational model to calculate the change in the energy of one component in a system when the change in energy of the other component(s) and energy flows in and out of the system are known.
SP1
Asking questions (for science) and defining problems (for engineering)
SP2
Developing and using models
SP3
Planning and carrying out investigations
SP4
Analyzing and interpreting data
SP5
Using mathematics and computational thinking
SP6
Constructing explanations (for science) and designing solutions (for engineering)
SP7
Engaging in argument from evidence
SP8
Obtaining, evaluating, and communicating information

To begin class, I provide my students with a simple geometric warmup problem, similar to earlier ones. This problem reminds students about the big idea that we're working on (that work can be defined as the area under a force versus distance graph). Today, I want us to shift from making coarse approximations of the area under a force versus distance graph - and, hence, work done - to making finer approximations. The warmup provides my students with a few moments, at the beginning of class, to remember where we've been and what we've been doing before moving forward.

Students work solo or collaboratively to resolve the warmup question. I circulate to check for understanding and to encourage engagement. After about five minutes, I give a two-minute warning to get students to wrap up their work. To end this segment of class, I provide a brief overview of the solution.

We pause our study of electrostatics to have the first of several student presentations from the"Hot Rocks" investigation of the previous unit.  Students generated interesting secondary questions while exploring calorimetry experiments that featured heated rocks and cool water baths and pursued those questions by designing their own procedures.  I use this kind of culminating activity - as opposed to the more traditional lab report - because the challenge of facing a live audience increases the authenticity of the learning; I ask our students to be more like scientists and, by submitting to this "peer review" we can approximate that.

These presentations provide opportunities for students to report conclusions to their peers, based on the distinct evidence they collected on their chosen question.  As a result, the entire project allows each team to engage in many of the NGSS Science and Engineering Practicesincluding Asking Questions, Planning and Carrying Out Investigations, Analyzing and Interpreting Data, Constructing Explanations, Engaging in Argument from Evidence, andObtaining, Evaluating, and Communicating Information.

In addition to a presentation score, students receive an "audience score." Above and beyond the obvious expected level of attention, I challenge each student to ask at least four questions over the course of the four presentations they'll see in the next week or so. At first, the questions seem a bit contrived but the spirit of honest inquiry inevitably takes over and the questions become more authentic over time. For example, an early question might be "How much water did you use in your trials?" which would count as a question but leads to little, if any, depth of understanding. Later, however, the questions become more thought-provoking like "What did you expect to find by altering the experiment the way you did?" I use a blank roster sheet to record questions and comments along with a scoring sheet for the presenters that focuses on several of our school's learning expectations.

I continue the practice of having student-teams present their findings on secondary questions from the "Hot Rocks" investigation of the previous unit.  So many of the NGSS Science and Engineering Practices can be fostered with this activity, though at this point we focus on Making Claims based on Evidence and Communicating Scientific Information.

Here's an overview of the presentation from one of my sections today:

I return to the ongoing issue of finding the area under a force graph for electrostatic charges. After a brief summary of the overall problem (that our trapezoid method captures too much area of this inverse square function), I ask my students to "turn and talk" with a neighbor to flesh out a strategy that will be better than our single trapezoid approximation.

I then invite students to the board to describe their methods.  An important element of the discussion is the trade-off between "effort" and "accuracy." For example, one can greatly minimize the error by using 100 very narrow trapezoids, but the effort is enormous and unsustainable.

As I wish to foster a sense of ownership and creativity, I encourage students to use whatever secondary method they'd like during the next segment of class; the practice time. Some approaches are shown below:

Here the student wishes to trade extra area (above the curve) for "missing area" (on the left side, under the curve) in hopes of getting the area just right. Choosing exactly where to draw the line depends upon a student's hunch, hence the "F hunch" term on the left hand side of the proposed trapezoid. 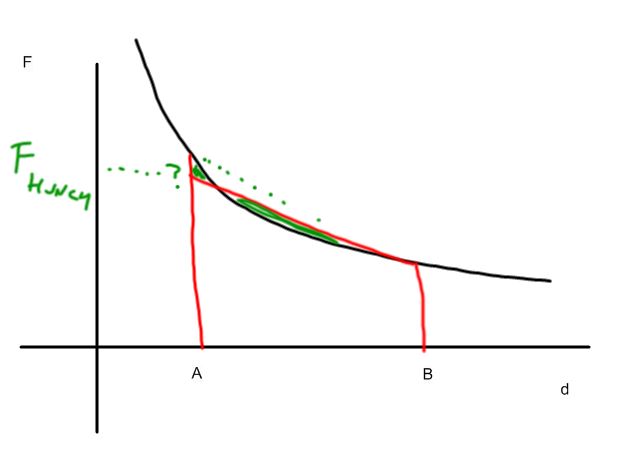 In the next example, the student wants to draw in several, narrower trapezoids. This would be my recommendation if I were to make one! It is a simple extension of something we already know, it vividly demonstrates a reduction in the error, it highlights the trade-off between effort and accuracy, and it introduces, painlessly, a central idea of calculus! 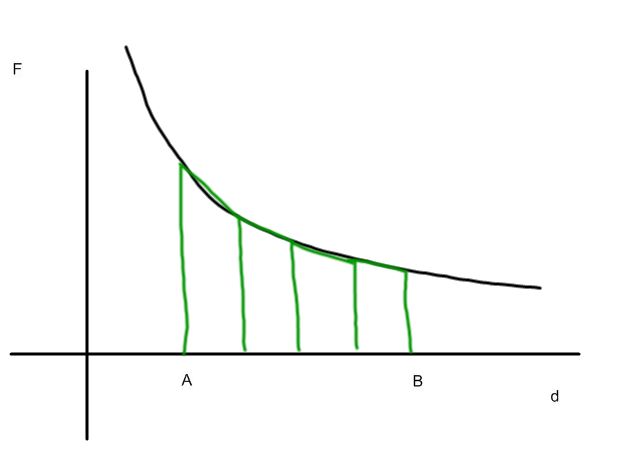 In the final example, a student-team wants to draw a line tangent to the midpoint of the curve to identify a smaller trapezoid that had insufficient area. They further propose that averaging that area with the area of the original single trapezoid method would provide a better estimate of the actual area. There is something appealing about this; for one, it gives a strategic choice for the selection of where to draw the line in first student suggestion shown above. Furthermore, it must reduce the overestimation of the single trapezoid method. To what degree I am not sure but I think this is an excellent example of mathematical thinking! 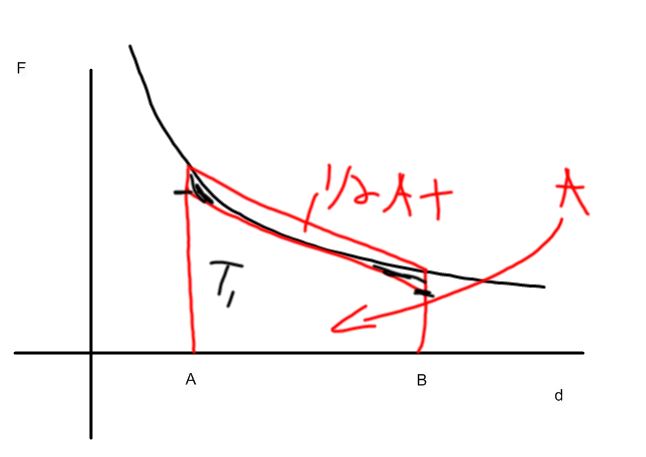 During the final segment of class, I give students a set of practice problems to try. These "work as area" practice problems are to be solved using the single trapezoid method and then solved again using any technique that students have created to decrease errors.  Finally, students calculate a percent change in the overall area from the first attempt to the second.

This practice time provides students an opportunity to either confirm the value of their new approach or confront any deficiencies they did not anticipate when developing that approach. It is important, should the approach be deficient in some way, that students recognize it themselves. The value of that recognition is so much greater when it is self-discovered.

Students work on these two problems until just before the bell rings. They test out their ideas and adjust their approaches as they see fit. I roam about the room, checking on progress and, with just a few minutes to go, I collect some sample student responses at the board for all to see. Here, for example, is a solution to the second problem with some sample student improvements identified. One can see significant (30% to 50%) reductions in the estimated areas. Class ends with, I hope, students feeling a real sense of accomplishment.