What Is A Mole?

SWBAT explain what a "mole" is and that it is based on carbon's atomic mass.

This lesson seeks to help students understand what the quantity "mole" is and to show that it is a huge number used to describe amounts of very small things (atoms and molecules).  This conceptual understanding is crucial to the foundation of stoichiometry.  It also serves to address the NGSS Crosscutting Concept of Scale, Proportion, and Quantity, particularly XC-SPQ-HS-4.  Students later need to convert from moles to grams (and vice versa) in predicting amounts of product that can be made in particular chemical reactions and will need to understand the scale of the mole.

The student activity in this lesson addresses two different Science and Engineering Practices.  This activity has students modeling large numbers (SEP 2).  They will relate their findings to the mole and perform comparisons which requires engaging in computational thinking (SEP 5).

While I take attendance, students do a warm-up activity in their composition Warm-Up/Reflection books.  I use warm-ups to either probe for students' prior knowledge about the day's upcoming lesson or to have them bring to mind and review what they should have learned previously.  (To read more about Warm Up and Reflection Books explanation, please see the attached resource.)

In this case, the warm-up is asking students to identify words that have numbers associated with them as an introduction to learning about the mole.

Warm Up and Reflection Books explanation.docx

Introduction to the Mole

After the warm-up, I show my students a TED Ed video by Daniel Dulek entitled How big is a mole?

I choose this particular video for several reasons.  It has a high production quality value and it is short and sweet.  I want my students to have an idea about what the mole is and this video, which stays closer to the conceptual description without mole-related calculations, fits what I am looking for.  In the past, I have used powerpoints that I have created as well as videos that I have both found and made to explain the mole which included some mole calculations.  My students would have anxiety over trying to understand the calculations and would miss getting a firm conceptual understanding of the mole, so I switched to this approach.

I ask students to work in groups of 5-6.  My chemistry classes have an average of 45 students per class, and this activity requires a lot of supplies.  In a smaller class, I could have students work in pairs or threes.

I pass out the handout entitled What is a Mole.  I give each group a different bag of material that I purchase at a dollar type discount store.  I might use rice, dry beans, or pasta, depending on what was available when I went in to shop.  I deliberately purchase a variety of materials so that different groups have different quantities of material.  I could even divide some materials into Ziploc bags and have students just count their quantity if a bag of rice seems like too much to count in a few minutes.

Students are asked to count how many individual particles are in their respective packages and to call that number a new unit of measurement.  They can determine the name of their unit as a group.  Then they need to use that unit to make conversions on the handout.  Students will make a conversion card (see my previous lesson entitled Dimensional Analysis for a detailed explanation of how we have used these in the past for conversions) for their new unit to use as an aid.  This will prepare students for moles <--> particles conversions in the next lesson.

Pictures of students working in groups, counting their "particles": 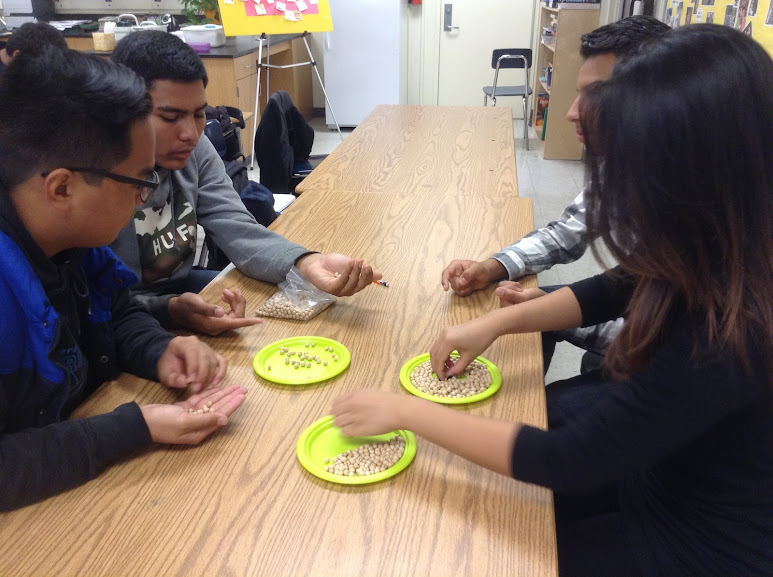 The students above were working cooperatively to count their objects (dry garbanzo beans), whereas the students shown below were working as individuals to count smaller groups before adding together for a total. 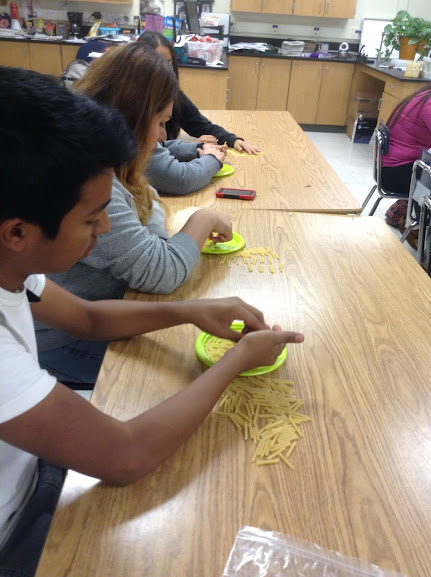 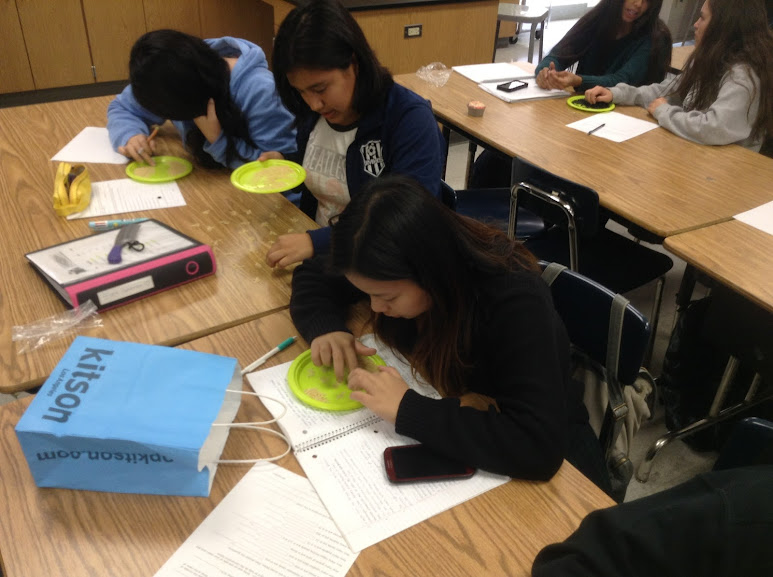 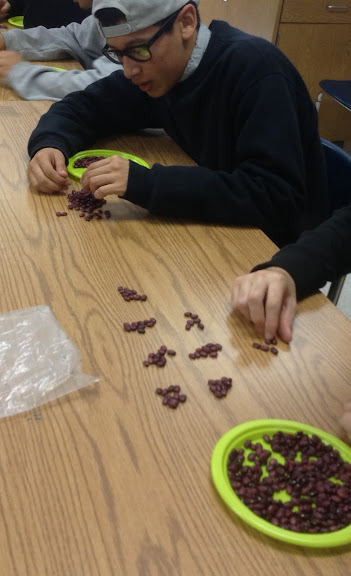 I draw a data table on the whiteboard while students are working on their small group activity that has the following headings: Material Type, number of particles, name of unit

As students finish their group work, I ask groups to send one student to the front to record what type of material they had (rice, beans, etc.), how many particles they counted, and what they have decided to name that unit.  Most likely, it will have taken students a good portion of time to count the number of individual particles in their samples and they will think their numbers are big, which is what I want.

I ask students to explain how they counted (did they group and then count by 10's, example) and what they named their counting units.  Then we calculate comparisons between their counting units and a mole.  I add a 4th column to our data table and ask students to calculate how many moles they have in one of their newly created counting units.  Students are surprised to see how small their units are compared to a mole.  This allows for a deeper understanding of mole size. 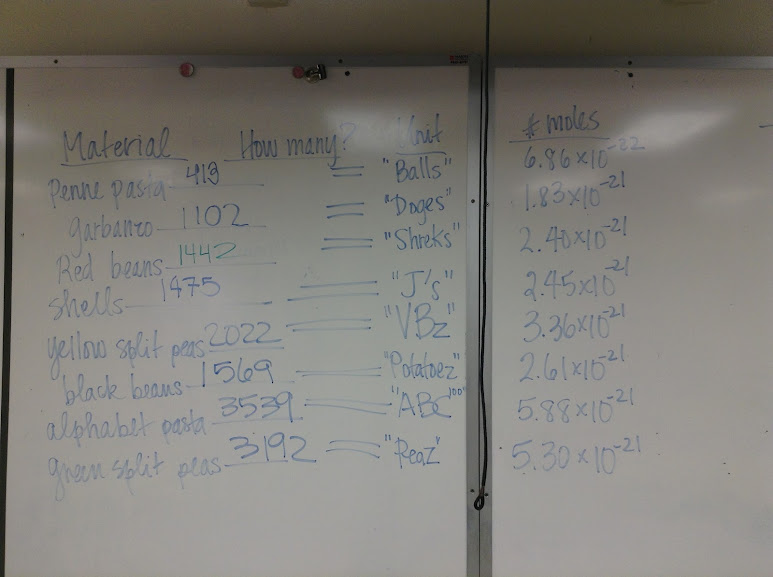 Then I ask what a mole is useful for according to the video we watched at the beginning of the period.  I am looking for students to identify its usefulness in counting extremely small particles.

I then take out a sample of carbon that has an approximate mass of 12 grams.  I use powdered graphite lubricant that I have previously massed out and put in a small, clear plastic container.  As I pass it around, I tell students that it is 1 mole of carbon and it has a mass of 12 grams.  I ask students to find carbon on the periodic table and tell me what is significant about a mass of 12 grams of carbon.  Students should notice that the recorded atomic mass of carbon is 12.011 on their tables.  I tell them that the mole was determined by figuring out how many atoms of carbon-12 (reminding them what an isotope is and that carbon-12 has 6 protons and 6 neutrons, which has a mass of 12 atomic mass units) it would take to have 12 grams of it.  I explain that the mole is just a way to move from atomic mass units (amus) to real units we can measure (grams).

In student's Warm-Up/Reflection Books, students should spend about 3-5 minutes writing a response to the day's reflection prompt.  Prompts are designed to either help students focus on key learning goals from the day's lesson or to prompt deeper thinking.  The responses also allow me to see if there are any students who are missing the mark in terms of understanding.  The collection of responses in the composition books can also show a progression (or lack thereof) for individual students.