SWBAT identify that all waves have amplitude and frequency.

In this direct instruction lesson, students draw sketches in their science notebooks in order to make sense of wave properties.
Lesson Author

As I present each slide I use direct instruction to help clear up any misunderstandings or confusing points.

You can see in this photograph, a student writes that amplitude is the "height of the wave from rest position."  The student goes on to write that ocean waves are big waves that will knock you down, lake waves will not knock you down.  This student is definitely making sense for him/herself about wave amplitude. 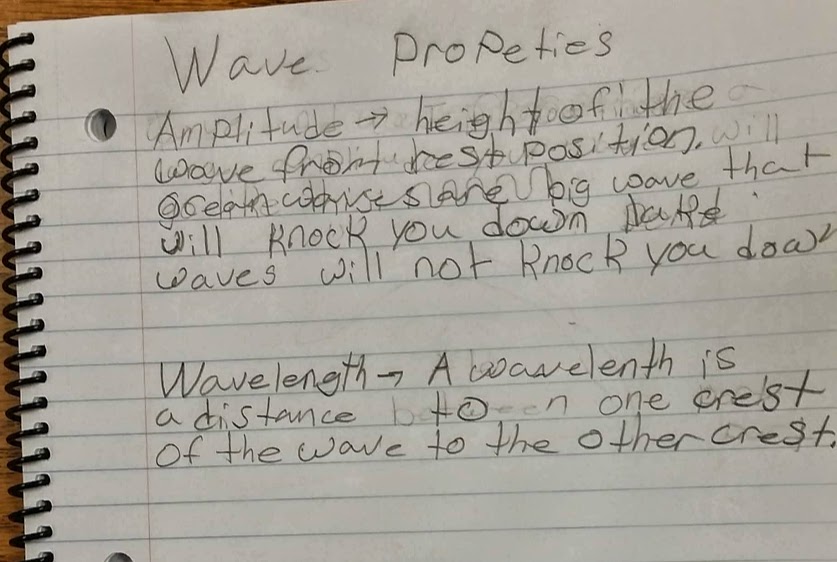 I show students these two photographs and ask them to think about the difference between amplitude and wavelength.

Notice in this student sample that the student does not remember that the top of the wave is called the crest.  This student notes the tops as "hills." 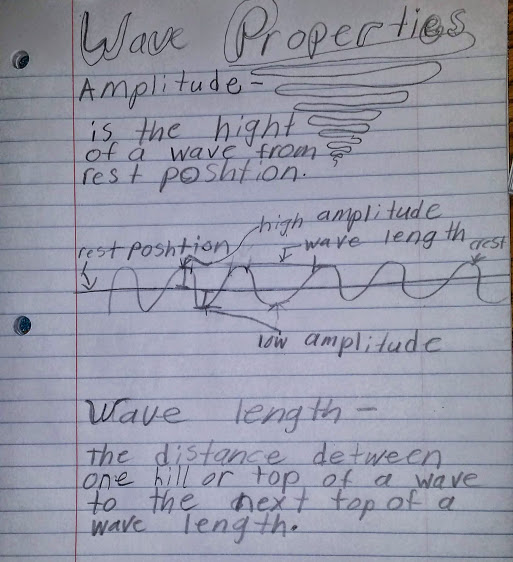 For the remainder of the lesson, students use a piece of paper (to be attached in their science notebooks later) to draw a picture that will help them remember what wave amplitude and frequency are. I let students be creative with their pictures, just like the photograph above.

I use the student drawings to informally evaluate if students understand the difference between wavelength and amplitude.  When I am deciding, I make two piles.  One pile shows student work that I can tell clearly depicts understanding, while the second pile is student work that doesn't show that a student knows the difference between wavelength and wave amplitude.

You can see in these photographs examples of student drawings.  This particular drawing shows amplitude on the left and wavelength on the right.  The student has marked on the drawing to show crest to crest as wavelength and made marks from rest position to the height of the wave for amplitude. 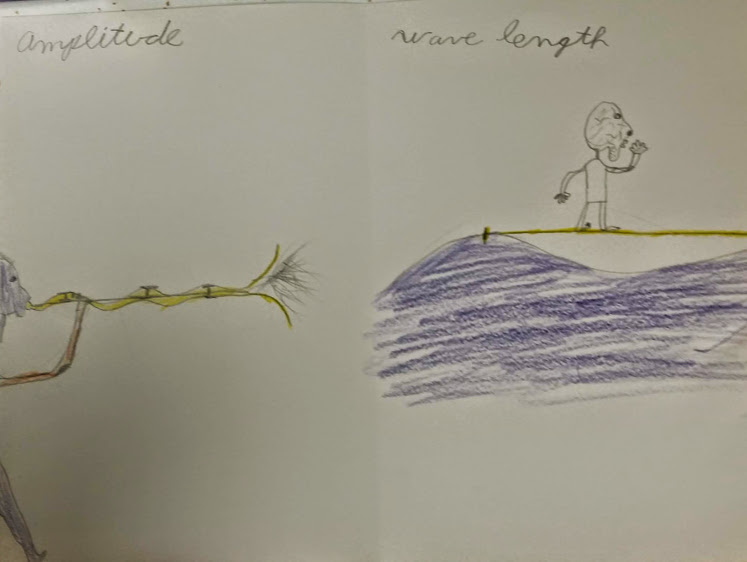 It is unclear if this student realized that amplitude and frequency are different.  The amplitude drawing could also be used to show frequency. 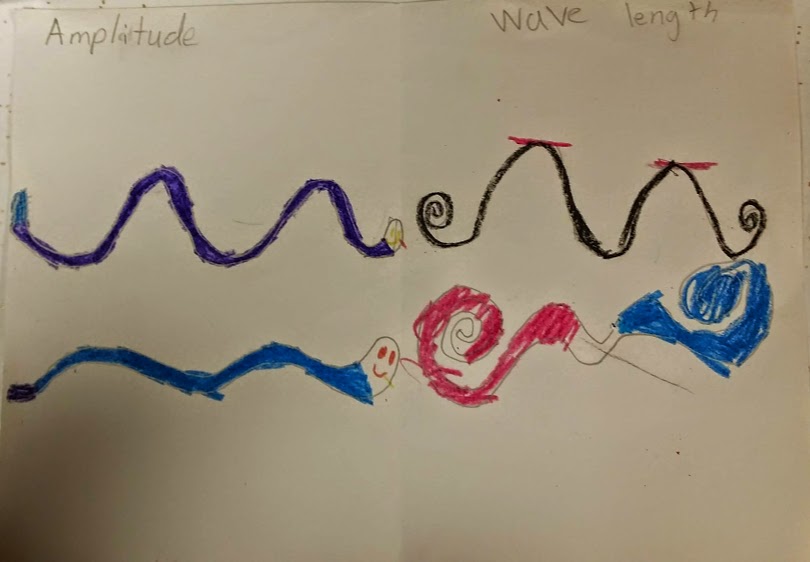 This student uses an ocean theme to showcase amplitude and wavelength.  The student's drawing seems to depict that he/she understands the difference. 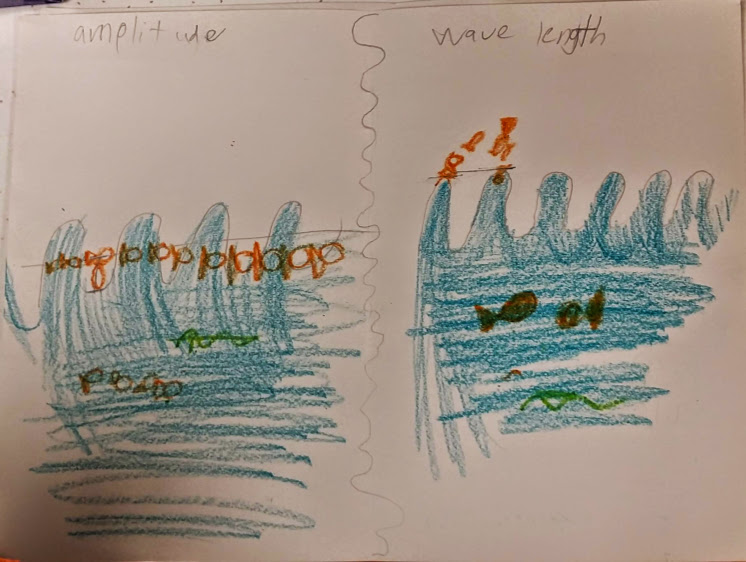 This student's drawing is very clearly showing that he/she understands the difference  between amplitude and wavelength. 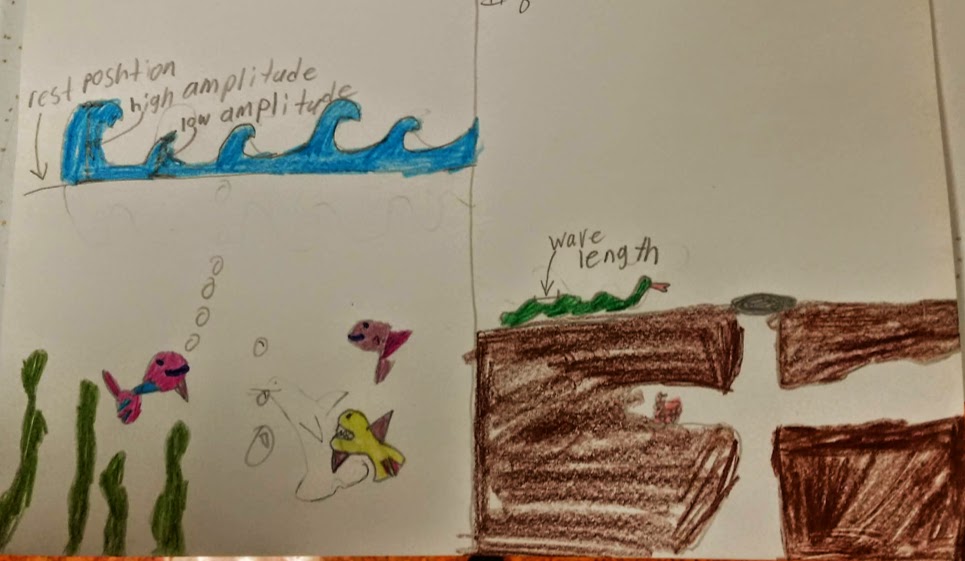