Identifying Unknown Substances as Ionic or Not Ionic

SWBAT use conductivity meters to identify solutions that are made by dissolving ionic compounds in water.

Ionic compounds dissolve in water producing ions that can conduct electricity; we can use this fact to identify unknown substances as ionic or not ionic in lab.
Lesson Author

This lesson helps students understand that ionic substances break apart in water to create ions.  These ions can carry an electric charge and thus, conduct electricity.

Students will be completing an investigation that involves testing several unknowns for conductivity upon dissolution (SP 3) and then using their data to determine whether or not their test results are indicative of ionic bonding for each sample (SP 4), addressing two of the Science and Engineering Practices.

While I take attendance, students do a warm-up activity in their composition Warm-Up/Reflection books.  In this case, the warm-up is asking students to recall part of our discussion during the past lesson (examining ionic compounds).  (To read more about Warm Up and Reflection Books, please see the attached resource.)

Today's Warm-Up: "How can we tell if an UNKNOWN substance is ionic?"

In this case, the warm-up is asking students to remember that we discussed during the past day's lesson that ionic compounds are conductive when dissolved in water.  We had discussed the differences between ionic and covalent compounds (see Day 1: Ionic Compound Formulas & Day 2: Ionic Compound Formulas), including that ionic compounds consist of ions that will break apart when dissolved in water.  At this point we have not discussed "polarity" or "solvents" so I am careful about my choice in academic vocabulary so as not to confuse students or start discussion on another topic.

I do not stamp warm-up books today because I am more concerned about getting students into lab and doing their investigation.  Today's warm-up serves the purpose of getting students already thinking about how to identify the unknowns anyway.

I have already told students that warm-ups are occasionally immediately checked and other times not.  At the end of each unit, I collect and spot-check Warm-Up/Reflection Books.

Warm Up and Reflection Books explanation.docx

We have not discussed polarity in class yet, so I do not go into detail explaining why substances do or do not dissolve in water.  The purpose of today's investigation is to reinforce the idea that ionic compounds are formed by the electrostatic attraction between ions.  When those ions are pulled away from the compound (as in dissolution in water), they can carry an electric charge and so we can identify ionic compounds by checking to see if, when dissolved, an unknown compound conducts electricity.

I handout the lab investigation sheet titled LAB - Ionic bonds.  Each student is responsible for his/her own sheet, even though students work in small groups (4-6 students) to conduct the investigation.

I show students how to use the conductivity meters that we have available.  While the handout was written for light-indicating conductivity meters, I have audible beeping conductivity meters available today instead.  I explain how the meter works, including a brief reminder that electricity is the flow of electrons in one direction.  I say that the battery helps to push an electron flow, like water through a hose, in one direction, so those electrons can do work like lighting a light bulb or making a sound (depending on the meter we have available).  I show students the probes that are separated and explain that if those probes were touching, the circuit would be closed and electrons could flow.  Since they are not touching, they need to touch something else conductive for the electrons to flow through.  I show students how the meter indicates conductivity by placing the probes on a conductive piece of metal, like a filing cabinet, nearby.

I fill a clean beaker with water from the tap while my students watch.  I ask them if water should conduct electricity.  After they have had a chance to answer (and disagree with each other), I tell them that pure water should not conduct electricity because there are no ions to carry the charge.  Then I test the tap water with the meter.  As it indicates conductivity, I ask my students why tap water conducts electricity.  As they offer answers, I also ask what we treat our water with.  We arrive at the conclusion that the chemicals added (such as fluoride) and the trace metals and minerals add ions to the water.  This demonstration is crucial so that students avoid using tap water for their testing!  Tap water will give false positive results, so students must use deionized water for testing.

After the tap water demonstration, I empty the beaker and dry it out.  I could use a different clean, dry beaker, but students need to see me dry out the beaker so that they know to do the same thing.  Then I add about 20 mL deionized water and test for conductivity so that students see a negative result.  I add some unknown that I know is ionic and re-test to show a positive result using the deionized water.  As the classroom erupts in "ooohs" and "aaahs," I tell my students that they will be testing five unknowns.  (I would typically use up to seven, but my stockroom is depleted and I had no other benign white powdery substances available at lab time.)

The "unknown" substances I used:

I dismiss students for "play" time.

Students work in lab groups of about 6 to test small samples of each unknown.  They individually record their observations in the data table provided on the handout.  Depending on which unknowns you use, your expected answers will vary from mine.

As students work, I am checking to see that they are indeed rinsing well and drying their testing vessel (a beaker) in between samples.  When I catch a group not doing this, I ask them what would happen if ions from the tap water or from the last conductive sample were not removed from their beaker before testing a new substance.  This should prompt students to catch their error and proceed with the proper lab procedure as I had demonstrated.

As students finish, I direct them to clean up their lab stations, wash and dry their beaker(s) for the next class.

Most students had no problem drawing the conclusion that if a substance did conduct, then it was an ionic compound.  Samples of student work demonstrating understanding are shown here: 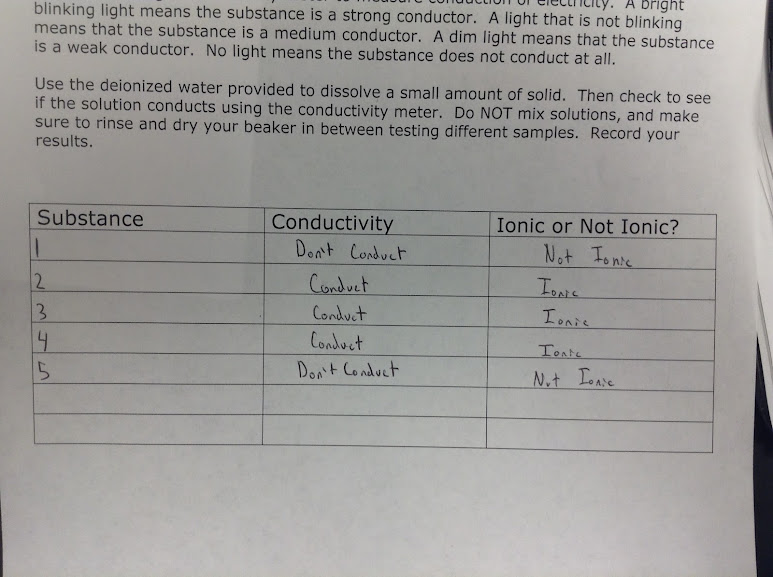 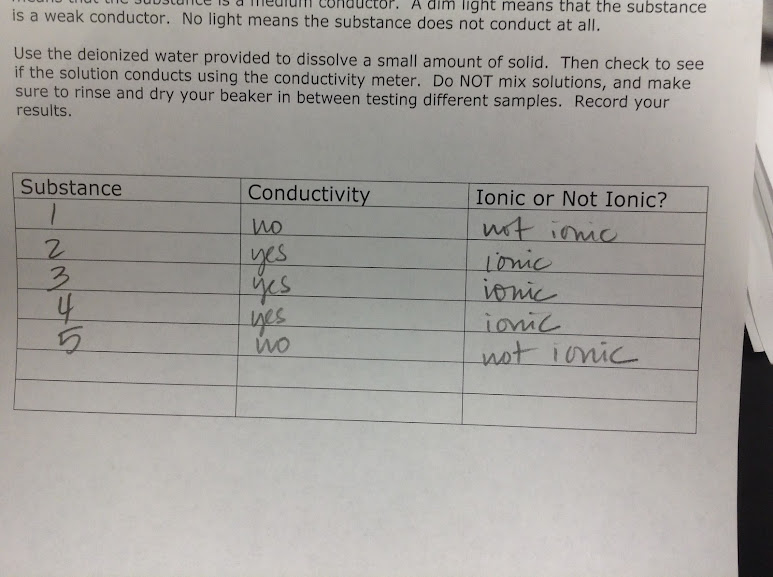 Some students had results that suggested a weak conduction, as shown below.  During our whole class discussion of results as described in the next section, we discussed reasons why we might have varying results (emphasizing the importance of cleaning the beaker between use!). 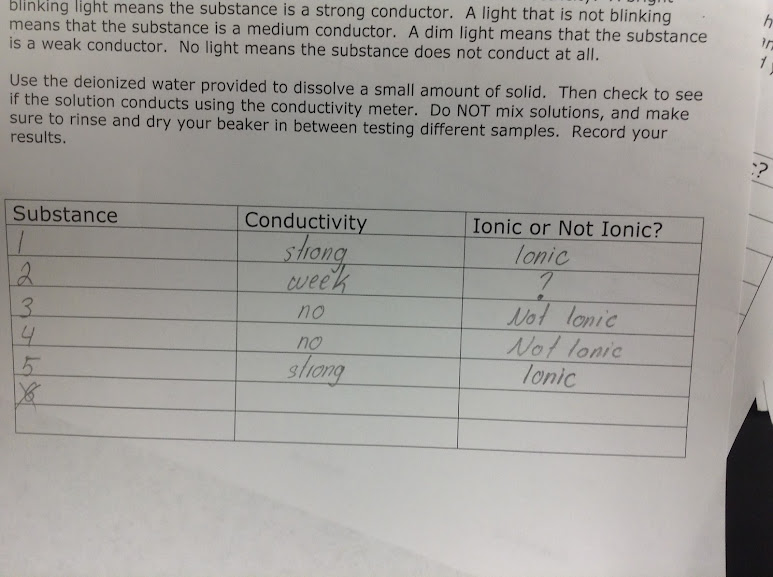 Finally, there were a handful of students (in my general level chemistry) who did not make the connection that conduction = ionic compound, as shown here. 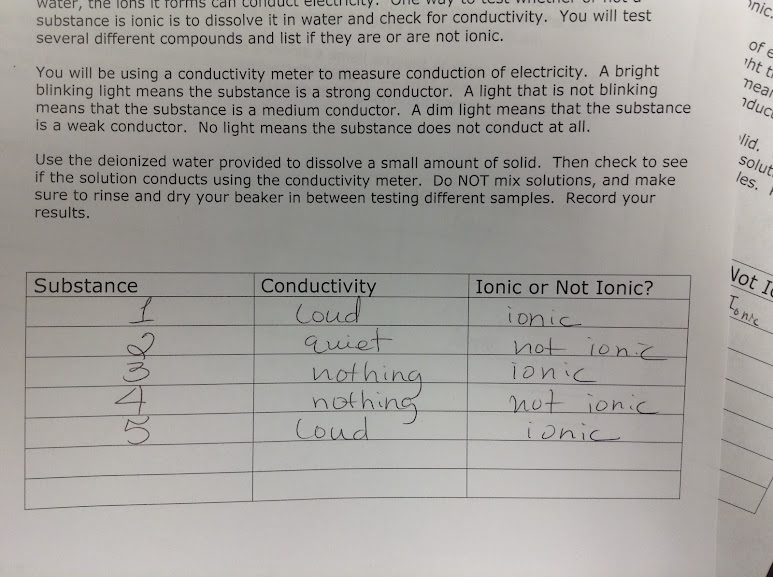 Once everyone has finished collecting data and stations are cleaned up, students return to their table area.  I ask students to tell me which of the unknown samples they felt were strong conductors and which were non-conductive.  We discuss discrepancies in any results between groups as well as discuss possible sources of error.  Potential sources of error:

Understanding what could have caused discrepancies (or "errors") is more important than the actual error itself.

I reveal the true identities of the substances and we talk about what we would have expected the results to be, had we all followed strict procedure and there were no sources of error.

In student's Warm-Up/Reflection Books, students should spend about 3-5 minutes writing a response to the day's reflection prompt.  Prompts are designed to either help students focus on key learning goals from the day's lesson or to prompt deeper thinking.  The responses also allow me to see if there are any students who are missing the mark in terms of understanding.  The collection of responses in the composition books can also show a progression (or lack thereof) for individual students.

Today's Reflection Prompt:  "In your own words, why do ionic substances conduct electricity when dissolved in water?"