Students will draw upon previous knowledge of charges to build a strong connection between the ideas of charges and electric forces.

Charged particles impart forces on one another that can be calculated.
Lesson Author

In today's lesson, I want to transition from our thermodynamics work and into the study of electrostatics. Fortunately, we are poised to think about charges - and the resulting forces between them -  as the final exercise of the thermodynamics unit was focused on the interactions of molecules and their interaction. We revisit that exercise today as a way to begin our new unit.

In the next segment, I want students to create two "idea webs," so I begin today's lesson with a quick demonstration of the software they'll be using (Inspiration).  I show both a completed image, then create one, in less than five minutes, with me as the central topic. I ask students to simply watch during this time as I want to demonstrate how simple it is to get started with this software utility. During the next segment of class, they'll create two idea webs and explore the software for other features.

This quick, casual introduction also helps set the tone for the exercise: light, quick, rich, and non-evaluative. Using idea webs allows students the opportunity to express their thinking without needing to organize it from the start. Once the ideas are out on the page, students can then organize them into categories and even color-code the categories. I find that this activity is similar to a brainstorm, in that the editing process is delayed until ideas are exhausted. This is a helpful mode for students, particularly when asked to make connections to big ideas.

I provide students with a classroom set of computers with the software previously installed. I ask students to work in pairs to create an idea web whose central topic is "thermodynamics." This exercise allows students to get familiar with features while accessing familiar content.  After about ten minutes or so, I ask various teams to electronically send their webs to me, in order to assemble a formative set of images. Here's a sample thermodynamics idea web.

I then ask students to create a web for "electrostatics."  Some will decode the word and start making connections, others will access prior knowledge from physical science, and others may not get very far. The goal here is to activate any prior knowledge and record it with some kind of permanence and clarity. My goal is to revisit this exercise at the end of the unit to see how complex their thinking has become over time. Here's a sample Electrostatics idea web.

As a way of bridging thermodynamics and electrostatics, we revisit an image from a previous class. Students are asked to adopt a particular electrical orientation for the molecules in the picture, choosing a positive end and a negative end and keeping that consistent from molecule to molecule. As these are generic molecules, there is no correct convention; it is only necessary, for this exercise, that students choose a convention and stick with it. Having done so, I ask students to draw in a number of "connections" (I'm careful not to say "forces" as I want that to come out later) between molecules. In addition, I ask students to identify which connections, of the ones they've already identified, are strongest and weakest. A blank image and a sample student response are provided as resources.

During this segment, I share a web-based simulation (a Gizmo! from ExploreLearning.com) that allows one to examine the forces that result when two charges interact electrically. After a few introductory comments, I present a series of challenges to the students, one at a time. After each challenge is issued, I invite a volunteer to come to the SmartBoard to show how the simulation can be adjusted to meet the challenge.

Here are the challenges that I start with, though I improvise on these if I want to reinforce any particular idea:

It is important to limit the simulation so that only one force on one charge is showing, like this: 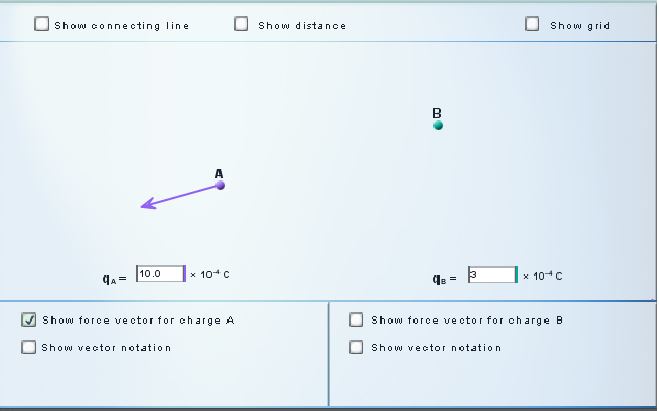 After a few minutes of discussing student choices and developing our intuition through the challenges stated above, I ask students to predict the direction and size of the force that results on the second charge. Ultimately, this allows us to invoke Newton's Third Law of Interaction ('equal and opposite reactions') and to underscore the idea that a single object cannot generate a force - forces are the result of two objects interacting.

In the final few minutes of class, we pause to summarize our intuition and to show the mathematical expression of our qualitative description (Coulomb's Law).

First, I handout notes that are simultaneously shown on the board. These serve to close the loop for all students - these are the take-away messages about the ways that charges interact.  On the flip side of the handout is the formula for Coulomb's Law.

We end the day by noting that forces are measured in Newtons and that one Newton is approximately the weight of a medium-sized apple.  I ask students if they can carry a bag of 10 apples? 50 apples? 100 apples? 500 apples? At some point, we agree that normal human strength is between 100 and 1000 Newtons. The purpose of this brief discussion is to contextualize the meaning of a term that will be used often in this unit and beyond.