In this hands on lesson, students work at several stations using every day ordinary objects in order to gain an understanding of different types of waves and their properties.
Lesson Author

I begin this lesson by asking students if they've ever seen a crowd do the "wave" at a sporting event.  I ask students to describe in their own words what a wave looks like.  Then I show this fun crowd wave video.

Next, I tell students that in science, a wave is a disturbance that moves through matter or through empty space. Waves do not carry matter. They carry energy from one place to another.  Students write this definition in their science notebooks.

Next, students explore different types of waves by visiting various stations or centers around the classroom.  Students rotate through various wave stations in which they record what the waves look like and predict what type of wave is represented at each station.  Before students travel to each station, I tell them about three types of waves - Transverse waves, longitudinal waves, and electromagnetic waves.

Transverse Wave - What happens if you tie a rope to a door handle and shake the rope up and down? You have made a mechanical wave called a transverse wave. A transverse wave makes the particles in matter move back and forth at right angles to the direction that the wave is traveling. The points where the wave is highest are called crests. The points where the wave is lowest are called troughs. A series of crests and troughs forms a transverse wave. The crests and troughs move along the rope. But, the particles in the rope move only up and down

Station 2 - Students carefully drop a small rock into a dishpan of water.  Students watch the waves created and record their observations in their science notebooks.  Students record what type of wave they believe they are making with the rock dropping into the water.

Station 3 -  Students load a slinky onto a broomstick and stretch it out a bit. (I used a meter stick since that was available in my classroom.) Students hold the broomstick horizontally at waist level, as steadily as possible, or secure the ends of the broomstick on desks or chairs.  Holding one end of the slinky still, have someone jerk the other end of the slinky forward and back along the broomstick as quickly as possible. This should create a longitudinal wave that travels down the slinky to the other end. (If the other end is being held very tightly, but without interfering with its coils, you may even be able to see the wave reflect and travel back up the slinky.  Students record their observations in their science notebooks and make a prediction about what type of wave they created.

In the two videos below students are rotating through the three stations. Notice how distinctly different the "wave demonstrations" look.

In this video, student are discussing whether or not the ripples on the water are transverse or longitudinal waves.  Two of the group members are convinced that they are in fact transverse waves while one group members thinks the demonstration shows longitudinal.  While it was difficult to see in this small container, this student did change hes mind when he saw the slinky experiment.

Next,  I show this video to help students make connections between the station activities and wave information from the day.

For the remainder of this lesson, students write about their learning in their science notebooks.  I encourage students to write about the different types of waves discussed - transverse and longitudinal waves.  Students work to draw pictures or sketches in their science notebooks in order to serve as a reminder about transverse and longitudinal waves. I encourage students to draw sketches of the three stations.  I also discuss with students their results for identifying the types of waves shown at the stations.

For this lesson, I informally assess students as I circulate around the room during the center activities. I also gauge students understanding of waves by reading and checking their science notebook entries.  These informal observations and notebook checks are a way for me to identify if students are able to describe how the types of waves are different. This is an important step in their progression of learning in order to be able to apply the idea of waves to light and sound.  Since students can not see waves, giving them a solid conceptual understanding of what waves look like will be critical as they move forward in the unit.

You can see some examples of student notebook responses in the photographs below. 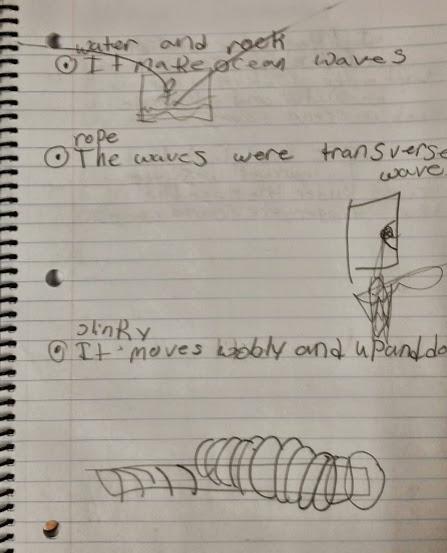 Notice in this response, a student appears to have some prior background knowledge since we have not talked about sound waves in class yet. 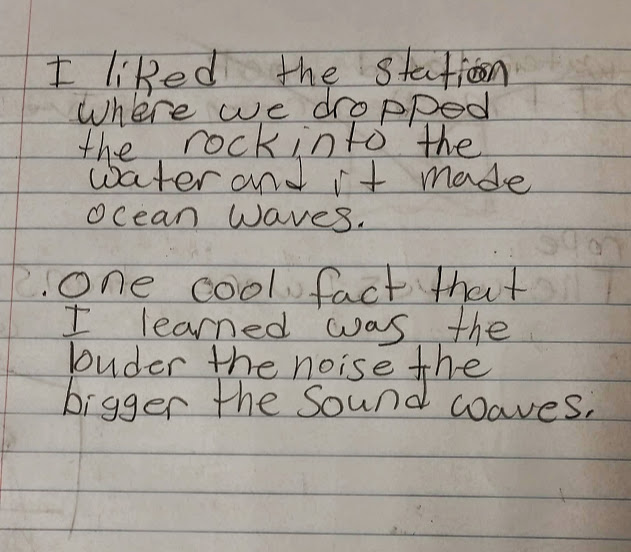 In this photograph, a student notes that the water and rock experiment produced longitudinal waves. This response occurred frequently in the class, so I need to make sure I review transverse waves in a future lesson. I believe that if the bucket was larger, students may have had an easier time seeing the difference between the waves made by the rock and how different they looked compared to the slinky wave. 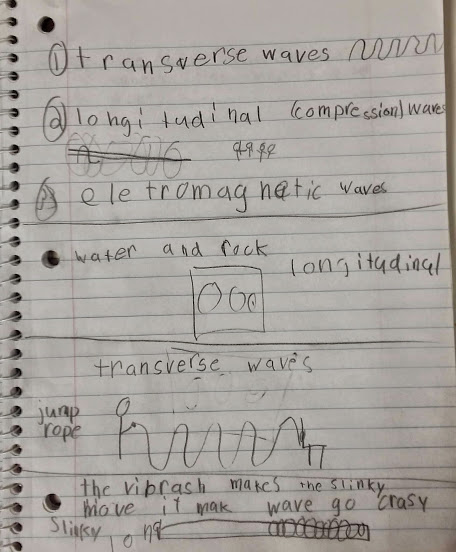