Phase Change and Behavior of Gases

Students will be able to develop a model that predicts and describes changes in particle motion, temperature, and state of a gas when thermal energy is added or removed.

Use this lesson to explore how the properties of gases depend on the behavior of the particles involved. Students will love playing with the simulation.
Lesson Author

In this 2 day set of lessons, students use an online simulation to understand the relationship of the effect that changes in temperature, volume and pressure have on the behavior of a gas particles.

This lesson aids in developing student use of models to explore science phenomena as the behavior of gas particle are not easily observable. The PhET simulation allows students to generate data while testing out their ideas on the relationships between volume, pressure and temperature of gasses followed by an analysis of the data to help them make meaning. The analysis also includes identifying patterns and relationships of gas properties that help them understand the fundamentals of the gas laws being studied.

If this is your first time using a PhET simulation, I recommend trying out the lab yourself first before teaching this to your students, as there is a slight learning curve involved in learning to use them.

The properties of gas can be explained by describing the behavior of the particles.  Gases are not “ideal,” but at ordinary temperatures and pressures they can be described approximately as ideal.  The particles in an ideal gas will adhere to the Kinetic Molecular Theory Postulates shown below.

As the temperature of a gas increases, so does its volume if the pressure of the gas is held constant.

As the volume of a gas is decreases, its pressure will increase if the temperature is held constant.

If a gas’s temperature increases, so does its pressure if the mass and gas volume are held constant.

Give students a copy of the science probe Hot and Cold Balloons, from Uncovering Student Ideas in Science: Another 25 Formative Assessment Probes by Page Keeley and published by NSTA. This probe is designed to probe student understanding of the conservation of matter.

Note: If this is you do have access to the probes, you can just as easily present the situation to your students and have them reflect and create a response for discussion.

Give students time to read and respond to the probe, and then to turn to their neighbors and share their ideas. Ask each group of students to reach a consensus. If there is not 100% consensus, that is o.k. When all groups are finished, ask a representative from each group to share out to the class their ideas. Listen and ask clarifying questions at this time but do not correct any misconceptions.

Follow this by by having students responds the following elicit questions in the science journals. Note: They will be asked to come back to this at the end of the lesson and complete a C.E.R for their ideas.

Students work with the PhET Gas Properties Simulation. The purpose of this is:

-       To describe what is meant by gas pressure, temperature, and volume.

-       To describe the relationships between each of these variables.

Before you begin the lab consider how best to group your students. Since computers are needed for this activity, you may be limited by the number of computers available to you. Ideally one per every two students works great for this lesson. If you have have less than that number, groups of three can work as well. I prefer to let my 8th graders make their own groups but do what is best for you classroom. Plan ahead for grouping ELL and special needs students and consider how to differentiate the lab for their individual needs.

If this is the first time you or your students are using a PhET simulation practice with the sim before starting to collect data. I like to give my students time to "play" that way when it is time to get down to business they have already interacted with all the moving parts and are less likely to get distracted by them.

One tool that you will need to show them how to access is the ruler tool. This is located in the side bar to the right. They will use this to approximate the volume of the box in nanometers. They will then change the units to measurement to liters to record in their data tables. For instance if the box has an initial width of 4.5 nm they should record it as 4.5 L (liters)  Note that you are only taking the measure of the box width. You can not measure the height. This will confuse some students. 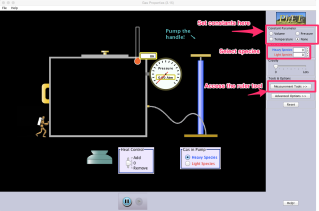 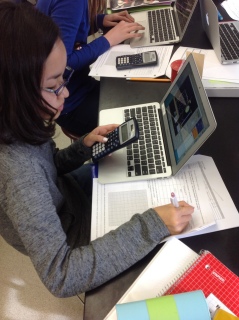 Most of the class will not be able to complete the simulation in the time allotted that's why an easy to access YouTube video is given as a homework assignment.  While watching the video students are expected to take notes on the properties of Gases and Kinetic Molecular Theory.  (Homework)

I begin day two with another elicit, this time with a video demonstration and the use of the protocol - Predict.Explain.Obseve.Explain.

Students are given a scenario and asked to predict the outcome, followed by an explanation of why they made this prediction. Next they observe some event or phenomena, collect data and observations, and explain what happened. See page two of the Predict.Explain.Observe.Explain Template for a complete explanation.

Before showing the video to the class ask them to predict what they think will happen to a balloon and marshmallow when placed into a glass jar and the air is then removed. In other words, what will happen to the volume of the air in balloon and marshmallow when the pressure is deceased while the temperature remains constant? They record their ideas and explain their reasoning.

When you are ready, show the following video.

While watching the video, students should record their observation in the observation section of Predict.Explain.Observe.Explain Template. After the video is over, give them time to complete the last Explain section.

You may elect to discuss this now or collect and grade their responses. You might manage this discussion either in small groups or as a whole group, either way, ask students to share their initial predictions and explanations...."I predicted.....because I thought......." and listen for their reasoning. Then they should share their observations and explanations. If you have not had your students practice communicating their scientific thinking, now is good time to model for your students how to engage in sharing their ideas as NGSS Science and Engineering Practice 8 entails Obtaining, Evaluating, and Communicating Information.

Connect their observations and explanations back to the gas laws and push them to make connections to the PhET simulation.

I have included a PEOE Success Criteria & Student Feedback and a Rubric for Predict Explain Observe Explain for evaluating student responses.

Use this time for students to continue working on the simulation.

Ask students to submit the follow up questions as part of their graded summative assessment once they complete the lab started on Day 1. You can find these questions on the last two pages of the lab.

Below are samples of student completed worksheet.

As this sections has them complete some simple conversion of atmospheres to torr, it is good idea that you understand these differences. Here is an excerpt form Wikipedia in the history of the units.

Torricelli attracted considerable attention when he demonstrated the first mercury barometer to the general public. He is credited with giving the first modern explanation of atmospheric pressure. Scientists at the time were familiar with small fluctuations in height that occurred in barometers. When these fluctuations were explained as a manifestation of changes in atmospheric pressure, the science of meteorology was born.

Over time, 760 millimetres of mercury came to be regarded as the standard atmospheric pressure. In honour of Torricelli, the torr was defined as a unit of pressure equal to one millimetre of mercury.

In 1954, the definition of the atmosphere was revised by the 10e Conférence Générale des Poids et Mesures (10th CGPM)[3] to the currently accepted definition: one atmosphere is equal to 101325 pascals. The torr was then redefined as 1⁄760 of one atmosphere. This was necessary in place of the definition of the torr as one millimetre of mercury, because the pressure exerted by a column of mercury depends not only on the height of the column but on both the temperature and the acceleration due to gravity.

The students should also complete a Claims Evidence Reasoning (CER) for the original elicit question to better evaluate their understanding of this system. (15 min or Homework if needed)

I interviewed a couple of my students after they completed the simulation to ask them how use this model helped them make sense of a complex set of rules. Below is their response.