Students will be able to identify major historic turning points in scientific principles and they will attempt to determine which had the greatest impact.

Science is so much more interesting when it is told as a story with key characters.
Lesson Author

Science and Engineering Practice 7 - Engaging in Argument from Evidence

Comprehension and Collaboration: CCSS.ELS-Literacy.SL.8.1.A - Engage effectively in a range of collaborative discussions (one-on-one, in groups, and teacher-led) with diverse partners on grade 8 topics, texts, and issues, building on others' ideas and expressing their own clearly.

All too often my students think that science is a completed discipline; everything we need to know is already known. I like to show the kids that science is in fact a story that has many more questions than answers.

TIP: If you are interested, I read a book series titled ‘The Story of Science’ by Joy Hakim that has dramatically altered the way I approach teaching science. I used to look as science as a set of related principles that when combined form a subject. I now teach science as a narrative story and insert the personalities of the great scientists into my teaching. The kids love to hear that Isaac Newton was a horrible instructor and due to his unpopularity with his students often lectured to an empty classroom.

The Story of Science - Aristotle Leads the Way

The Story of Science - Newton at the Center

The Story of Science - Einstein Adds a New Dimension

Masters of the Universe lesson traces five scientists, Aristotle, Nicholas Copernicus, Galileo Galilei, Isaac Newton, and Albert Einstein. These five individuals changed the direction science was heading in, by introducing concepts and practices that where considered revolutionary for their time.

I created a Powerpoint (Masters of the Universe) that can be used to walk your students through the creation of science, Aristotle, Copernicus, Galileo, Newtons, Einstein, and finally what great mysteries are awaiting. I include presentation notes that describe how I introduce each topic.

At the conclusion of the lesson, pass out Masters of the Universe - Group Discussion to each group. Have the students discuss, as a group, the individual accomplishments of each scientist. Then, they should pick one scientist and provide evidense of who has had the greatest impact on our modern society. This concluding assignment allows the students the opportuity to take what they have learned, analyze the available data (their notes), and as a group debate who the most influential scientist is, which is both an NGSS Practice and CCSS Standard (S&E Prac 7, CCSS.ELA-Literacy.SL.8.1) 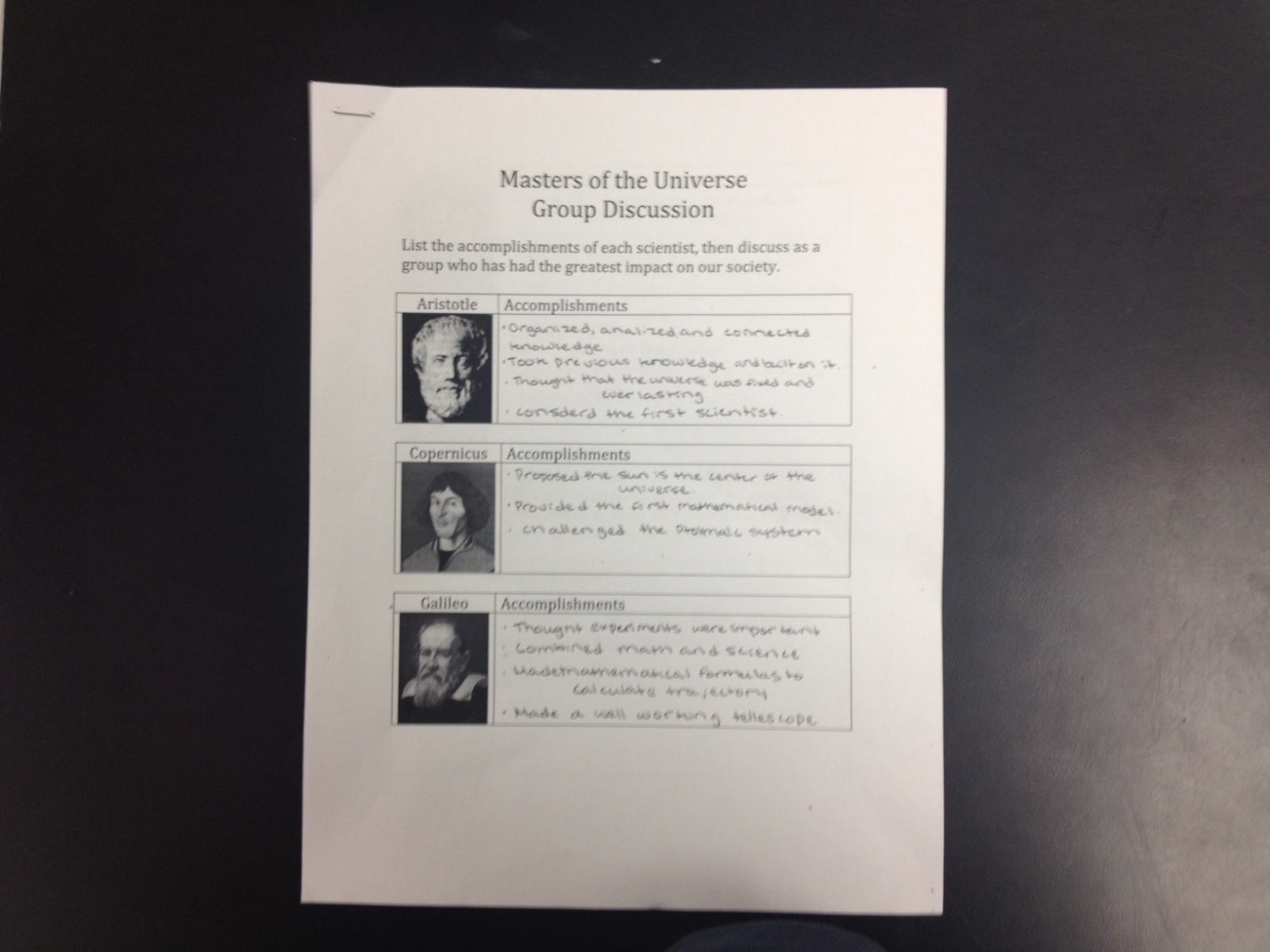 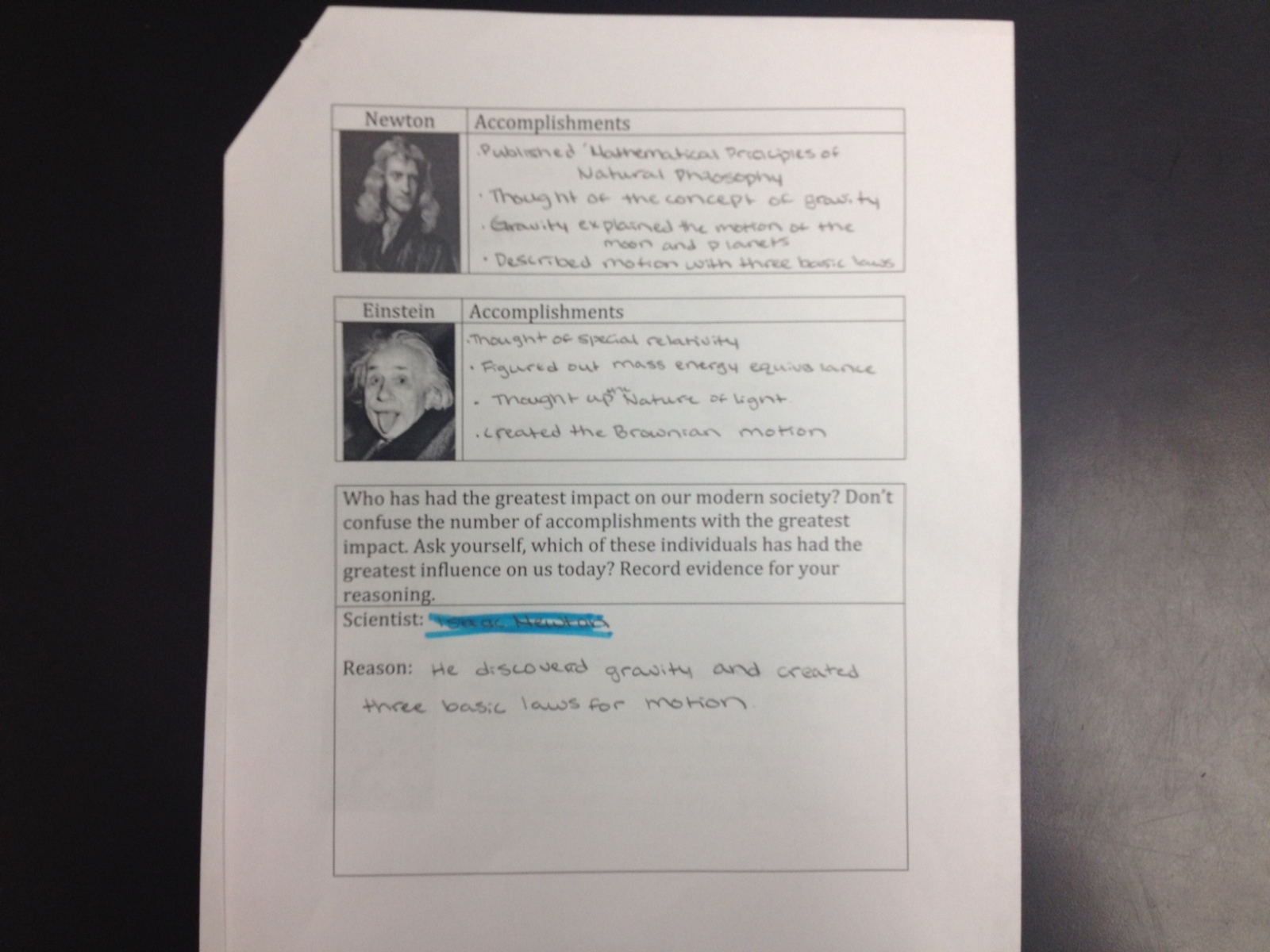 I made a Science Heroes Wall of Fame. I went through my science text book and identified the major concepts taught and found the original authors of those discoveries. I then printed each headshot (Science Heroes) on my color printer, purchased twenty cheap frames from a dollar store, framed the pictures and hung them in my room. 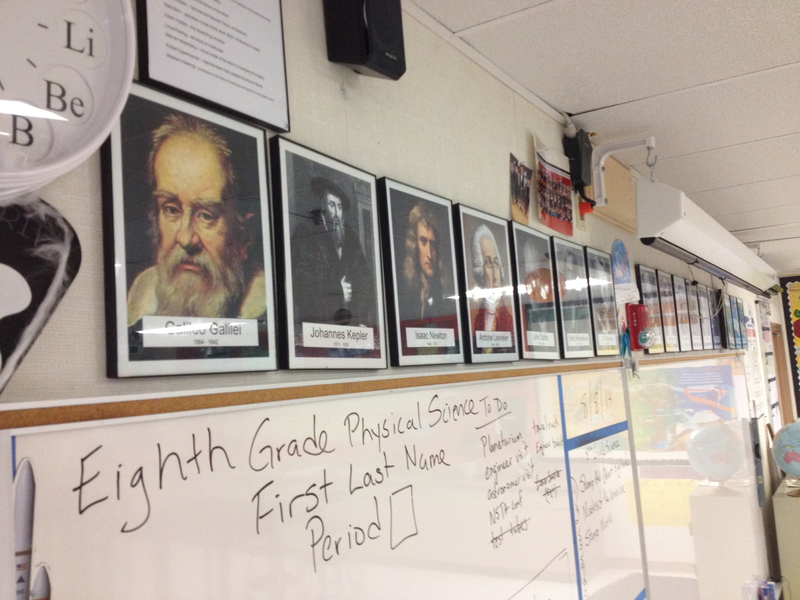 When I’m introducing a new concept I can then point to the original author and relate the discovery to a person and hopefully implant the concept in their brain. I’ve made sure to learn some trivia about these scientists to make them appear more relatable to the students.

This Science Heroes Wall of Fame is specifically targeted to physical science referring to chemistry, physics, and astronomy. Feel free to add/subtract scientists to fit your subject matter. I included a cheat sheet on the last slide to help identify important discoveries and who made them.