Students will be able to use a multimedia presentation to communicate their understanding of the best practices for studying physics and solving complex problems.

Effectively communicating ideas based on observations is a key part of the process of learning and doing physics.
Lesson Author

As students enter the room, they take their seats according to a seating chart that I have projected on the interactive whiteboard. Students sit in groups of four at lab stations. During the first 5 minutes of class, I ask students to create a mind map centered on the word Physics. A mind map is similar a word web, but mind maps also include connections between images, words and other annotations. I have included an example of a mind map for "unleashing creativity", but other topics will grab students' attention equally well. If time permits, I construct a mind map, like the one shown below on a related topic with my students' input. 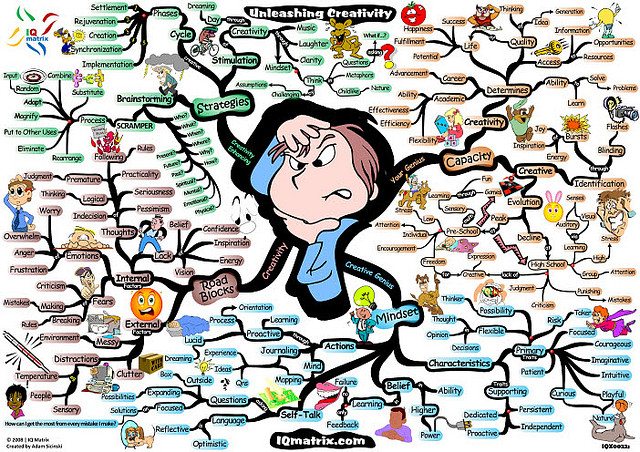 While students are creating their mind maps, I circulate and distribute the corrected exit slips from Lesson 3. At the end of five minutes, I ask to student to share their response. I have the same activity projected on the Promethean board so that I write down student responses as they are shared.

Physics is model-dependent; with this in mind, I believe that students need to internalize understanding and practice flexibility of thought in order to become proficient in the application of physics concepts. The first few days of the school year are focused on building the framework for a community of learners within our classroom. I made the warm up activity a mind map to give multiple access points for students to make connections between their prior knowledge of the world around them and the past week's activities from physics class.

During this lesson, I continue to make clear that students have to raise their hands, then state their name and responses to each section of the activity.  I primarily chose this activity because analyzing detailed information and communicating results in a concise and accurate manner is an essential skill for actively learning physics. This lesson focuses on creating multiple models of the student centered information based on the idea that students can trust each other with candid reflections on the collected information. Within the next section, I will ask students to create a mini exhibition on the first week of physics that they will share with their parents during curriculum night which is held during the second week of school.

After our class has discussed the past week in physics, I allow students five minutes to modify their mind maps and update their notebooks to reflect our discussion because I want students to become comfortable with revision as a way of improving content mastery.

Once students are done organizing their mind maps, I project a Student Choice Board with two methods of communication, a set of key questions and three ways in each domain for completing the task (SP6 and SP8). I created this activity because I want my students to become proficient in both the study and practice of physics which includes communicating results to various audiences in an accurate and precise manner. My students are comfortable with Coggle, Powtoon, and blogging as they have all taken either an introduction to computer science or technology course which required communicating using a variety of technology tools. To ensure that students who are new to the school also have the ability to complete this task, I also project a Framework For Creating A Visual.

I distribute bins which contain white boards, markers, poster paper and Chromebooks to each team. Students are seated in four member teams which I created based on their baseline results in Lesson 2 so that each team will have a mix of abilities. Then I inform students that they will have a ten minute planning stage where they can verbally communicate with their team members. I also tell students that while each team has to create a visual, each team member has to create their written component individually. Afterwards, I remind students of the importance that clarity plays when communicating ideas about physics. Next, I ask students to spend the next 25 minutes working quietly in four member teams to create their visuals.  Initially, student work follows our school wide norms on Student Roles. The resource manager will gather and keep track of all of the materials that I made available. The facilitator will keep everyone on the same page. The reporter will record team ideas on the provided whiteboards. While the task manager will assign tasks to the other student team members to implement their plan.

As the students progress through this activity, students may deviate from their chosen roles as needed. For example, if their initial choice fails or does not meet their group's expectations, student team members will use their white boards to regroup and make another choice of media. This part is rather free form, some groups are rather decisive and will break the task up into smaller parts to be combined at the end of the elapsed time. For example, some teams will work on individual coggles and join them together at the end. Other teams will work collaboratively using google apps to work on a document at the same time, making edits as they progress through the task together. While students are working on their projects, I circulate and ensure that all of the technology tools students are using are working correctly and answer clarifying questions students may have.  I implement a three-then-me protocol when it comes to questions, which helps students learn to share authority over their learning in our classroom. The basic premise of the three-then-me protocol is that students have to ask three other sources to help them solve their challenge before they can ask me for help on a task. After 25 minutes have elapsed, I ask students to stop working and to have the resource manager submit their visual for grading.

After students have created a group visual, I ask them to spend 25 minutes working individually on their written components. When I first started using this type of activity, I used to have students work on both the group visual and individual written component in the same 50 minute period using the time in any configuration that they liked, but it became chaotic when group members could not agree to stop working on their visuals and move toward finishing their individual components.  After the 25 minutes have elapsed, I circulate and collect the I ask students to spend the last five minutes writing down warm and cool feedback about this section of the lesson in their notebooks.

I created this task because I believe that synthesizing information to communicate to an audience is an important 21st century skill that my students need to attain to be successful both in my class and the external world.

Student Choice Board
Framework for creating a visual
Student Roles

Once students are done creating their mini exhibitions, I ask them to add their names to the mini-exhibitions and to place them on the resource table. I ask students to recycle any excess materials and clear their immediate area before the next class begins. Then, I hand out an Exit Slip in which students express their current understanding of the important portions of today's lesson and the Student Role  they chose during this activity. After five to seven minutes have elapsed and students have completed their exit slips, I collect the slips to be graded and returned to students during the first five minutes of the next lesson.