Students will be able to use a model to determine that densities of gases are extremely low compared to the densities of liquids and solids.

This investigation uses a simple method that allows for capturing the gas released from a chemical reaction to help students determine the density of the released gas.
Lesson Author

Ryan Keser
Brookline, MA
Grade Level
Eighth grade
Subjects
Science
Matter and its Properties
meteorology
Standards
7.G.B.6
Solve real-world and mathematical problems involving area, volume and surface area of two- and three-dimensional objects composed of triangles, quadrilaterals, polygons, cubes, and right prisms.
MS-PS1-2
Analyze and interpret data on the properties of substances before and after the substances interact to determine if a chemical reaction has occurred.

In my class this lab comes on the heels of our lab on measuring the density of solids and liquids. I have found that many students do not understand that gases have different densities, or any at all as most have had little in the way of focused observation and measurement of gasses up to now.

For this activity we begin by predicting and measuring the mass of an empty balloon and the same balloon filled with air. From this engage, we get students thinking about the properties of air.

Next we move on the the lab where students will first determine the volume of gas released from a chemical reaction and then repeat to determine the mass of the gas produced.

I would budget two classes for this lesson.

To pique students ideas, I show them an empty balloon and a filled balloon and ask them to tell me how we can measure the properties of the gas inside the balloon (mass, volume, density). Give the students time to respond and collect their ideas.

Time permitting, you could have a bucket of water and demonstrate this with a student helper.

Finding the Mass and Density

You might also try this as a "design a lesson" where you challenge students to come up with a procedure and test out their ideas.

Here is a video of some of my students working through how to plan their investigation: 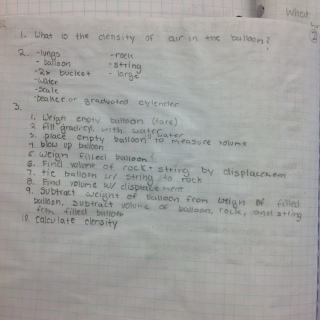 Before starting this lab you will need one set of the following material for each group of 3-4 students:

For this lab it is a good idea to model the procedure first as it can be a bit tricky for students to capture the antacid tablet under the cylinder. They have to be quick. Anticipate that some will make mistakes and have extra supplies ready to go. I recommend practicing it on your own and then demonstrate the procedure for your students.

I start by reading over the lab with my students and demonstrating the procedure with a complete set of lab supplies. This is one of the first labs of the school year for me and I find it good practice to model for my students how to prepare for and conduct a lab because most seasoned teachers will know that students will rush right into the lab, make mistakes and you'll be running around helping groups start over and this can easily turn into a 2 day lesson if not managed well.

If you are using lab notebooks, I encourage you to have your students complete the data collection and observations in the notebook rather than on a worksheet. If you want them to hand something in, consider just the follow up questions.

Once they get started on the lab, work with the students who you know will need the most support to get started then move around the room to see how the rest are doing. Occasionally I will stop the class and pose a question or make a clarifying statement as needed.

Once the lab is completed have students clean up and work on the reflections questions.

Below are samples of student follow up responses from two different classes. Note the differences individual class data (#1). How might we as teachers address these discrepancies? Kids want to have the "right" answer. 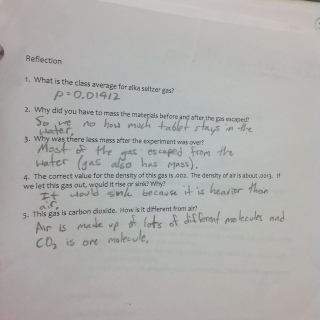 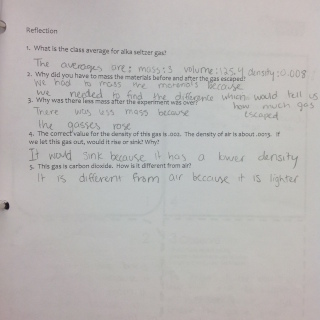 Lab: Density of a Gas

If time permits after all groups are done and cleaned up then start reviewing the results of the lab. This will most likely happen on the next class day.

Begin by review the data collected by all the groups. I like to create a large class data chart and have a member from each group come up and report out their data. This is a critical step in communicating our observations since we know that not all groups will have the same data. It is telling for you as the teacher how well the groups did in following the directions in order to get data close to the "right" answer.

I strive to help my students making reasonable and reliable generalizations. At this point we can start to emphasize key vocabulary and push students thinking to start using the vocabulary when explaining their understanding.

Spend time with each reflection question.

Remember, Activity Before Content (ABC) and Content Before Vocabulary (CBV). Pull the students into the science and guide them in making meaning. With that said it is important to identify some common misconceptions that may come arise.

What are typical misconceptions or difficulties in students’  understanding of density that relate to causal structure?

• Students substitute weight for density. They assume that heavier objects are  denser without considering weight per size.

• Students find it hard to attend to two variables at once and focus on the  relationship between them as understanding density requires. They attend to  only one variable at a time (weight, size, shape, etc.) Often they attach more importance to one variable than the others.

Textbooks that present the concept of a standard, but are not clear that it is under certain conditions of temperature and pressure can lead to this misunderstanding. This makes it difficult for students to understand a host of real world phenomena. They need to understand that if the variables in the relationship change, then the density can change.

• Objects either sink or float and it is possible to make a list of “sinkers” and “floaters.”

What are other (non-causality-related) typical misconceptions or difficulties in students’ understanding of density?

• Fluids (especially gases) are not “materials” and don’t have density. Gases have no mass and therefore no density.

• The spaces in between the particles of an object are air. (They can be in some instances of mixed density where air molecules fit in the gaps in the object material, but the spaces between particles are typically not air.)

• Differences in felt weight are always due to one object being hollow (or mixed density).

• Objects that don’t have felt weight do not have weight at all. (Students often use felt-weight as their concept of weight so they think that tiny visible pieces of Styrofoam have no weight at all because you can’t feel any pressure on your hand.)

• Materials cease to exist when they are no longer visible. Students think that the material kind of the object or substance only maintains its identity if large-scale perceptual properties are preserved.

• Hollow objects always float (when it actually depends upon the ratio of the density of surrounding material to the inside air and how that ratio compares to the density of the liquid.)

• Frozen means that something feels cold to the touch (rather than the scientific meaning that it is in a solid state.)

A really nice extension to this lab is to have students approximate the density of the air in the room. You can give them the average density of air (1.29 kilograms per cubic meter)  and have them calcualte the rest. Here is a sample script.

How Heavy is the Air in the room?

How much would you say the weight of all the air in this room weighs?

Deborah Gaff
Hope IN
Rural
Area of Irregular Figures - How do you break up a figure?
7th Grade Math » Geometric Measurement