SWBAT draw models of atoms and identify elements based on their numbers of subatomic particles.

This lesson addresses Disciplinary Core Idea Physical Science 1 (DCI PS1), which focuses on Matter and its interactions.  Specifically, two of the three subsections of DCI PS1 require student understanding of atomic and nuclear structure (structure of matter and nuclear processes).  Basic understanding of these concepts require students to understand that atoms are made from protons, neutrons, and electrons. At this point in my lesson sequencing, students already know that protons and neutrons have nearly equal masses and that the mass of an electron is comparatively negligible.  (For more DCIs in physical science, see Disciplinary Core Ideas - Physical Sciences.)

Through this activity, students are using atomic modeling kits or constructing their own models using paper which engages them in Scientific Practice 2: Developing and Using Models.  (More Science and Engineering Practices are listed here.) Students who work with these models and draw accompanying diagrams will be far more likely to understand where to find the subatomic particles in relation to areas of the atom (nucleus versus electron cloud).  Through the process of adding neutrons, protons, and electrons, step-by-step during the activity, students are asked to think about how atomic mass and atomic number can change (or not) as well as to explain why.  This reinforces the learning that atomic number (and therefore elemental identity) is determined by number of protons and that atomic mass is determined by numbers of neutrons and protons, which is critical to student understanding of elemental properties and periodic table organization.

While I take attendance, students do a warm-up activity in their composition Warm-Up/Reflection books.  I use warm-ups to either probe for students' prior knowledge about the day's upcoming lesson or to have them bring to mind and review what they should have learned during the Flipped Classroom recording the night before.  (To read more about Warm Up and Reflection Books and the Flipped Classroom  please see the attached resources.)  I make my own flipped video for my students to watch, but cannot share it because it contains copyrighted images from my textbook.  Alternative videos that address the same content are available on YouTube, including this one and this one.

Today's Warm-Up: "Draw a complete He atom, including all its subatomic particles.  (Use a different color for each type of particle or clearly label each one.)" 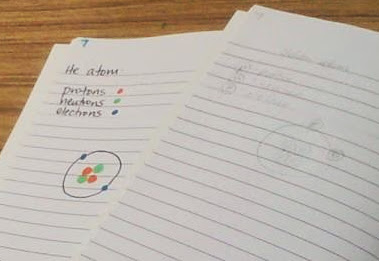 In this case, the warm-up is asking students to both apply knowledge from the flipped lesson and is preparing them for today's activity during which they are expected to both build and draw their atomic models.  I use copyrighted images from my textbook in my flipped videos, but I am including two suitable videos in the resources here that convey the same information and can also be assigned to students as homework the night before.

Demo: What to do

5 minutes
What if I don't have models?

I hand out the Atomic Models packet to students first (keys for the Atomic Models handout are available here: Page 1, Page 2, Page 3, and Page 4).  Then, I explain to students what they will be doing and model the completion of Part A actually using the same modeling kits they will use (or using cut out paper circles if atomic model kits are not available).  I am able to do this by projecting from an ELMO document presentation device so that they can see me building the helium atom model, but I could also draw on the board in front (or even use large circle cut outs and magnets for a board demo).  I ask them to tell me what types of subatomic particles I will need, and as they call out answers (electrons, protons, neutrons), I hold up the appropriate parts of the kit or color-coded circles.  I explain that, for example, the red balls represent the protons, and so on.  I also ask them how many of that particle I need to place on the tray for an atom of helium.  In this way, as a class, we build the helium atom.

I model how they will draw the atom on their activity sheet.  Using the colors I expect them to use, I draw the helium atom on my activity sheet as it is projected and students follow along. 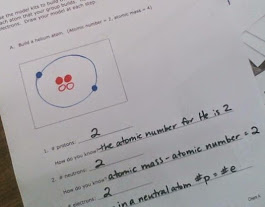 I ask students to answer the questions below the model themselves and give them about a minute to finish, then give them permission to check with their neighbor, before confirming the correct answers as a class.

Students move into their already established lab groups at lab stations.  If lab stations are not available in your classroom, students can easily do this modeling task in their desks by moving desks into pod groups (if they are not already in that seating arrangement).

I have atom modeling kits that include trays with a designated nucleus area and electron energy levels, but any atom modeling kit should work for this activity.  In a pinch, you can also use circles cut (or punched) from different colors of construction paper.  I use red for protons, white for neutrons, and blue for electrons (because that matches the kits I usually use), but you can use any colors as long as all protons are one color and likewise for neutrons and electrons.

As students are following the directions, I am walking around to make sure that they understand what they are doing and are discussing with each other the activity questions on their handouts.  Students should also be drawing the color-coded atom models at each stage of the activity using the correct colors.

Misconceptions I look for:

At the end of Group Work time, we come back together as an entire class to discuss what we learned.  Students sit in their desk space and I use the whiteboard to record the key take-aways as students answer the question, "What did we learn in this lesson?"

This serves as a chance for students to ask clarifying questions and for me to make sure to address any lingering misconceptions.  Depending on student answers to my questions as I visited groups during the modeling activity, I might focus on the misconceptions that particular class of students seemed to exhibit most.

The key take-aways from this Class Discussion should be:

In student's Warm-Up/Reflection Books, students should spend about 3-5 minutes writing a response to the day's reflection prompt.  Prompts are designed to either help students focus on key learning goals from the day's lesson or to prompt deeper thinking.  The responses also allow me to see if there are any students who are missing the mark in terms of understanding.  The collection of responses in the composition books can also show a progression (or lack thereof) for individual students.  (For more information about how I use Warm Up and Reflection Books, please see the attached resource.)