Let’s Share! In this lesson students will learn to divide circles and rectangles into halves.
Lesson Author

Lisa Murdock
Lakeland, FL
Grade Level
First grade
Subjects
Math
Geometry
Standards
1.G.A.3
Partition circles and rectangles into two and four equal shares, describe the shares using the words halves, fourths, and quarters, and use the phrases half of, fourth of, and quarter of. Describe the whole as two of, or four of the shares. Understand for these examples that decomposing into more equal shares creates smaller shares.
MP6
Attend to precision.

I start this lesson by reading aloud, “Give Me Half” (the YouTube version can be found here: Give Me Half).  I like to begin this lesson with this read aloud because it not only introduces the concept of halves and wholes, but it is based around the concept of sharing a pizza.  Sharing is something that all students can relate to and can easily understand.

After reading the story, I demonstrate how to fold a shape to show one whole and two halves using the student cut outs.  I then have them cut out the shapes from the Halves_student cutouts.docx and have them practice folding the shapes in half.

For children to understand halves (1.G.A.3), they must understand that a shape in itself is a whole. When a whole has two equal parts, these equal parts are called halves.  Folding a two-dimensional shape helps children see one whole and two halves. Without measuring and counting, children can tell if the parts made by folding are fair shares or not.  I like to encourage children to use words such as fair shares, one whole or one, and the name halves. Using the language of fractions with geometric models helps children establish their understanding of fractional parts (MP6).

I then display the first slide of the Halves.ppt and read the following problem aloud:

I have a volunteer draw a line to divide the sandwich into two equal shares.

I continue by reading the following problem:

Two other friends share the sandwich on the right. How could this sandwich be cut a different way so each friend gets an equal share?

If children drew a vertical line in the first sandwich, I would encourage them to draw a horizontal line or a diagonal line to show equal shares in the second sandwich.

Next I display the second slide of the Halves.ppt and work through the model with children.

I emphasize that when a shape has two equal shares, the equal shares are called halves, and each individual share is called a half (MP6).

Next, once students have understood the concept of equal shares, I release them to complete the worksheet independently.

In this picture, you can see a student who has successfully mastered the concept of what is half of a circle or rectangle: 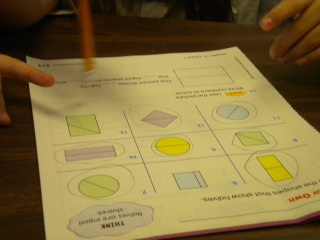 To close out the lesson, I have students draw a circle and separate it into halves and color each half a different color.