Show Me The Money - Comparing Decimals

SWBAT represent decimals as money and make connections between fractions and decimals.

In this lesson, students use coins as a way to compare decimals and make connections between money, decimals, and fractions
Lesson Author

Melissa Romano
Helena, MT
Grade Level
Fourth grade
Subjects
Math
Fractions
Number Sense and Operations
Decimals
Money
Standards
4.NF.C.5
Express a fraction with denominator 10 as an equivalent fraction with denominator 100, and use this technique to add two fractions with respective denominators 10 and 100. For example, express 3/10 as 30/100, and add 3/10 + 4/100 = 34/100.
4.NF.C.6
Use decimal notation for fractions with denominators 10 or 100. For example, rewrite 0.62 as 62/100; describe a length as 0.62 meters; locate 0.62 on a number line diagram.
4.NF.C.7
Compare two decimals to hundredths by reasoning about their size. Recognize that comparisons are valid only when the two decimals refer to the same whole. Record the results of comparisons with the symbols >, =, or <, and justify the conclusions, e.g., by using a visual model.
MP2
Reason abstractly and quantitatively.
MP8
Look for and express regularity in repeated reasoning.

This magic trick is called "The Magic of Thirds."

For this Magic trick, I tell students that I need a sheet of blank paper.  I start by giving the blank piece of paper to one student. This student then folds the piece of paper into thirds.  Then I ask another student to tear the sheet of paper neatly along the folds so that they have three sheets of equal size.

The smaller sheets may seem identical, but the center sheet will actually be frayed on two of its sides, while the end sheets are frayed only on one side. No one will notice this, (except me, for now), which will help me succeed with this trick!

Then, I ask the student who tore the pieces of paper to give the paper to three friends.  I then ask each student to write down any number and then to fold their small piece of paper into thirds.  I tell each student to concentrate on their number.

Next, I have each of the three students give their folded pieces of paper to another student to sort and mix up the papers.  The student should make sure there are no identifying marks on the outside of the paper and that the papers are folded into thirds.

I have the sorter deliver the three papers to me. Next, I pull out the first volunteer’s sheet.

I know it’s theirs because it’s the only sheet with two ragged edges.

I then hold up the sheet and ask the student if it is their number, and they are amazed that I picked the right one!

After this trick, I try my best to not give away the secret.  I do lead a brief discussion about making educated guesses and tell students that is their only hint about this trick. I tell them that at some point during the trick, I made an educated guess.

For this warm up, I present the following problem to students and ask them to solve it on their whiteboards.

After about 4 minutes, I lead a brief discussion and guide students in sharing their thoughts and strategies about how to solve this problem.

To begin this lesson, I review with students the definition of a decimal by using this power point. - money powerpoint (Note: I do not show this entire power point to my students because some of the information I want my students to discover for themselves. I show the slideshow through about slide 7)

After the power point review, I give each learning partner a bag of math money, or coin manipulatives. I tell students that today they will participate in an activity in order to practice writing decimals, money and fractions.  Next, I display the activity - decimalsinmoney.  (There is a typo in the chart and I do address this with my students. In the first column, the symbols should be < instead of >.) Students make a chart like the one shown in order to record their coins used.

Students spend the next 20 minutes doing the activity.  As students participate in the activity, I circulate around the room asking clarifying questions.

You can see in this student's recording sheet that he/she is recording the money as a decimal, (no money symbol) as well as a fraction in order to help compare the decimals.

During my questions, I try to gauge and elicit students thinking about how decimals, like fractions, enable us to describe parts of a unit quantity. Some students, based on various assessments in my district,  do not make the decimal-fraction link correctly. Others exhibit the same difficulties they encountered with fractions in their thinking about decimals. Fundamental understanding of fractions, such as dealing with equivalent fractions, is critical to decimals as well.

One of the pieces of information I try to instill in my students is that both decimals and fractions are designed for the same purpose; to express parts of the unit quantity.

It is not uncommon for students to see the decimal point as separating two whole numbers.  Students who have not completely made the decimal-fraction link will think of two different types of whole numbers making up a decimal such as 4.63, (perhaps as 4 whole numbers and 63 of another unit). These students will then tend to select longer decimal numbers as larger. For example, they would pick 4.63 as larger than 4.8.

One strategy I am very aware of is the over-reliance on money as a model to teach decimals, which can then  lead to this "two parallel whole numbers" interpretation, for those students who think about dollars and cents, without fully appreciating the role of a cent as a hundredth of a dollar.  Because of this, during my questions I try to always draw students attention back to the fact that $0.63 is sixty three hundredths of one dollar.

After students have participated in the activity for about 20 minutes, I lead a whole group conversation discussing much of the same information mentioned above. I think it is so important for students to master, I don't mind repeating it.

In this lesson wrap up, students participate in a "footprints" activity.  In the footprints activity, students are given a sticky note on which they write what new knowledge or understanding they are “walking away” from the lesson with.  They then post the sticky note on a LARGE footprint outside my classroom.

In this photo below, you can see some students sticky notes on the footprint. 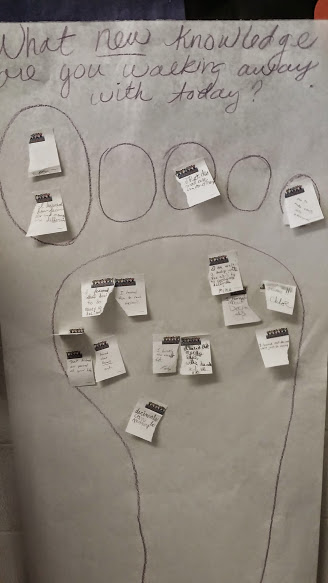 The following examples show different student responses to what new knowledge they are walking away with. I like this activity and chose this wrap up because with it's openness, students can respond anyway they like and their responses always tell me something.  For example, in this first footprint example, I know this student now has a strategy of using money in order to compare fractions to the hundredths place. 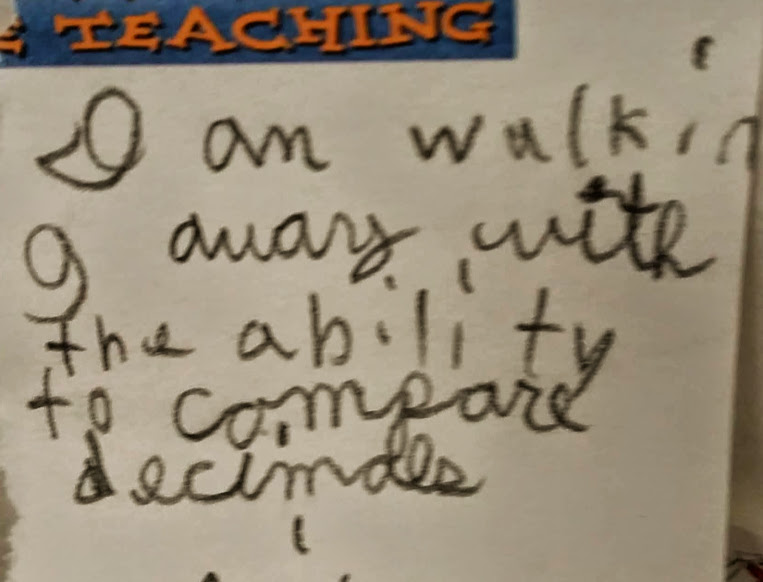 In this next response, I can tell that this student is now more comfortable being able to read decimal numbers by his/her response. I have found that most students are very honest when I ask them to reflect on knowledge gained or concepts they still have questions on. The footprints activity is also another way I can begin to differentiate my lessons, homework, and choice assignments.  While one student may feel he/she now has a helpful strategy to compare decimals, other students are still just wrestling with how to read and say decimal numbers. This helps me make learning groups and partners in future lessons. 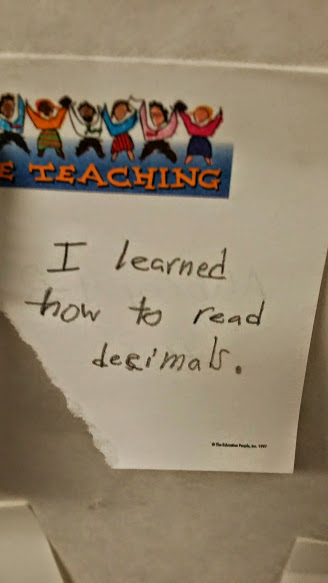