All Hands In for Improper Fractions

In this lesson, students explore the relationship between mixed numbers and improper fractions with a hands on activity.
Lesson Author

Melissa Romano
Helena, MT
Grade Level
Fourth grade
Subjects
Math
Fractions
Number Sense and Operations
Standards
4.NF.B.3c
Add and subtract mixed numbers with like denominators, e.g., by replacing each mixed number with an equivalent fraction, and/or by using properties of operations and the relationship between addition and subtraction.
MP4
Model with mathematics.
MP7
Look for and make use of structure.
MP8
Look for and express regularity in repeated reasoning.

To engage my students in thinking about numbers today I have a number trick for them I call Birthday Magic.

This trick works every time - as long as the math is correct- and students love it when I correctly guess their birthdays.

Next, add 6 to that number.

Then multiply the new answer by 4.

Now, add 9 to this product.

Next, multiply the new sum by 5.

Next, I have my students then add their date of the birthday to this answer. (Just their month date, not year.  For example, someone born September 26 would simply add 26 during this step.)

For this warm up, I present students with this review problem.

Vanessa grows sunflowers over the summer. She has 8 sunflowers and each sunflower measures 9/12 of a foot when they are first put into the garden. If she were to lay them end to end, how long would her 8 sunflowers measure

Note:  Most students were able to see that they could calculate 8 x 9/12 and get 72/12 which is equal to 6 feet or 72 inches.  Other students saw that 9/12 was the same as 9 inches and then multiplied 9 inches 8 times to also get 72 inches.  A few students used repeated addition.

Vanessa grows sunflowers over the summer.docx

I begin this lesson by grouping students in pairs. I provide each group with unifex cubes and tell students that in today's lesson they will convert improper fractions to mixed numbers. I remind students that  an improper fraction is a fraction with a numerator that is greater than its denominator (ex: ), and a mixed number is a number that includes both a whole number and a fraction ().

You can see in this photo student utilizing their time to build a cube tower. 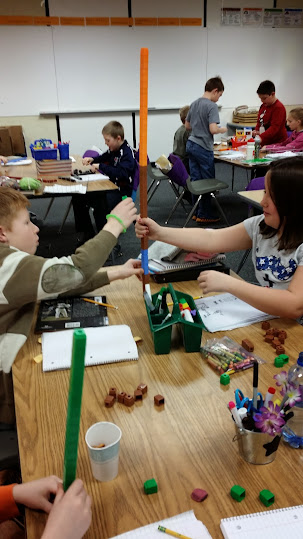 After the three minutes, I direct students to model a mixed number like 2 2/3 with cubes.

My students are used to drawing area models to model fractions and have had practice doing this prior to this lesson.

Next I use direct instruction and I say to students, “I am going to divide these eight parts into groups of three.” I ask students to explain why the eight counters need to be placed into groups of three . [The denominator is three, so a whole is made up of three parts.]

Then I demonstrate moving the eight counters into groups of three. I have students do the same with their counters. Next I say to students, “Instead of eight individual parts, I now have two groups of three with two counters left over. How many wholes do we have?” [2.] “How do you know?” [There are two groups of counters that each represents a whole, each group has three parts in a set of three, 3/3].

I then ask students how many individual pieces are left. [2.] I ask students what part of the whole these two pieces represents. [2/3].

Next, I display several problems for students to model, converting mixed numbers to improper fractions.

As students work, I check for understanding.  I ask students to share the steps needed to convert the mixed number to an improper fraction.

Listen in as this student is converting a mixed number to an improper fraction. She has discovered a shortcut of multiplying, but got a little confused.  I ask her several clarifying questions to get her back on track.

Note:  Many students, by the end of this lesson, have discovered shortcuts for converting mixed numbers to improper fractions.  I spend about 5 - 7 minutes showing some of the shortcuts other students have discovered and help students see the connections between using the manipulatives and why the algorithm of multiplying the wholes with the denominator and adding the numerator works.  This is usually an exciting time in my class as students own the knowledge and make sense of the algorithm.  They delight in understanding why the "trick" their parents may have taught them works.